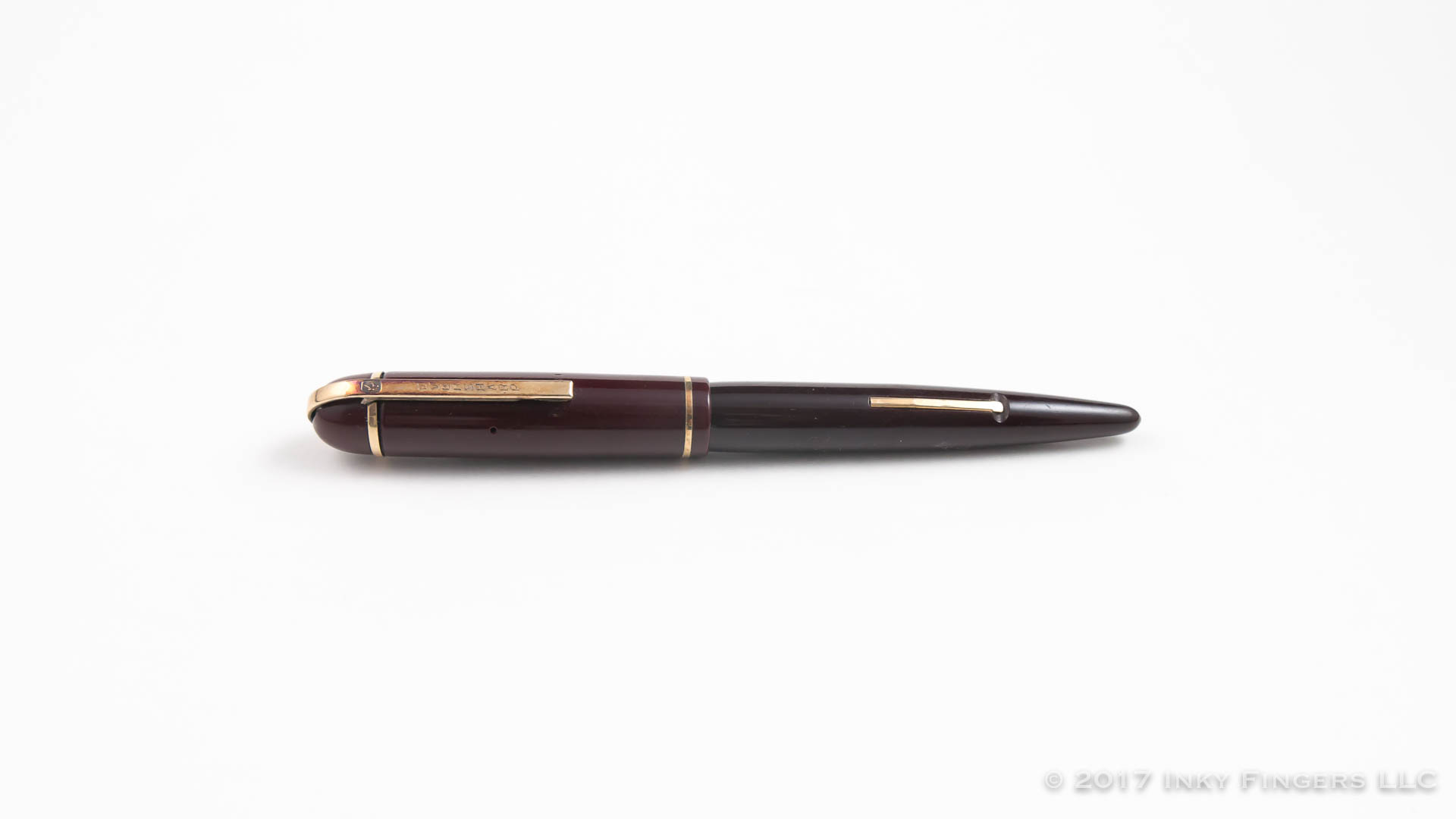 A great deal of the information in this review came from Richard Binder’s Article, “Profile: The Eversharp Skyline Family”  and Jim Mamoulides Pentrace article, “The Eversharp Skyline Nib: The Flex, the Stiff, and the Manifold.”  Please click through to read the articles for more detail.

The early days of the fountain pen collector hobby were often marked by being able to walk into an antique store or flea market, find a pen that was no longer in working condition, buy it for a song, fix it up, and sell it. While it is still possible to do that these days, it’s becoming harder and harder to find decent vintage pens in those locations anymore.

There are, I think, a couple of reasons for that. First, with the Internet now available, people can look up the values of the pens they find in estate sales, and they have a sense of what the pens might be worth. Secondly, there is a growing number of collectors and pen people who snap up these pens. Third, and perhaps most importantly, a larger percentage of people whose possessions are making it to the antiques/estate market are people for whom fountain pens were not a normal part of their everyday life. As we see the baby boomer population start to age and pass, I believe we will start to see fewer and fewer vintage fountain pens appear in the traditional venues.

That being said, I still find myself taking an occasional pilgrimage to the antique stores and malls in my area to look for pens. I usually don’t find anything, but every once in a while, I find something that I like. Such was the case with this Eversharp Skyline.

Wahl-Eversharp introduced the Skyline in 1941, just as the US was entering World War II. The pen’s unique design, with a large, bulbous cap and a short, tapering barrel was designed by Henry Dreyfus, a man who had also made a significant design impact on steam locomotives of the era. You can see the parallels. When held at the right angle, the Eversharp skyline looks like a long train, the tail off in the distance, and the clip the trail of smoke and steam billowing from the boiler. It is a very 1940s look.

The Skyline came in three different sizes (demi, standard, and executive), and in a wide variety of finishes with a wide variety of nibs. My pens, which may have been something of a frankenpen, was one of the lower-end, all-plastic version. The cap is a dark burgundy-ish, the barrel black-ish. (Both are so dark it’s hard to pin down the actual color.) The hardware on the pen is gold-filled brass, which remains in remarkably good condition considering the pen’s age. My pen is one of the standard models, fitting in the middle between the diminutive demi and the larger executive.

The pen is made from a polystyrene plastic, a fairly new pen material for the time. Polystyrene could be molded (rather than machined) and didn’t require the same level of hand finishing.  Some of the early polystyrenes apparently had longevity problems, but this pen seems to have held up quite well.

The pen’s cap is highlighted by a round finial into which is carved a channel into which the clip sits as it drapes over the top of the finial and hooks into the cap band. The face of the clip has the Wahl double checkmark logo and the word EVERSHARP.  The cap starts the taper toward another gold cap band.

The barrel is where the pen’s taper really takes off. Coming to a point, the barrel is quite unusual for fountain pens of the era. The pen is a lever-filler, and the lever box is located 2/3rds of the way down the barrel toward the tip.

Removing the cap takes 2 full turns, and reveals a swooping step-down, barrel threads, and a moderately long but slender section. The pen posts, and if you’ve got larger hands, you’re going to want to post this one. When posted, I find the pen incredibly comfortable in the hand. Unposted, nearly unusable. One potential issue to note is that, when posted, the cap covers up the lever box entirely, and could cause issues if the lever box isn’t sitting completely flat to the barrel. It could also cause some wear to the gold plating.

For the first two years of production, Wahl-Eversharp created the pen with a “visulated” section. My pen has an opaque section, placing it at a slightly later date…but more on this in a moment.

Wahl-Eversharp was known in their day for making wonderful nibs, and those nibs are one of the reasons why their vintage pens continue to be so popular…especially their magnificent flexible nibs. And the nib on this pen is magnificent. But also something of a mystery. 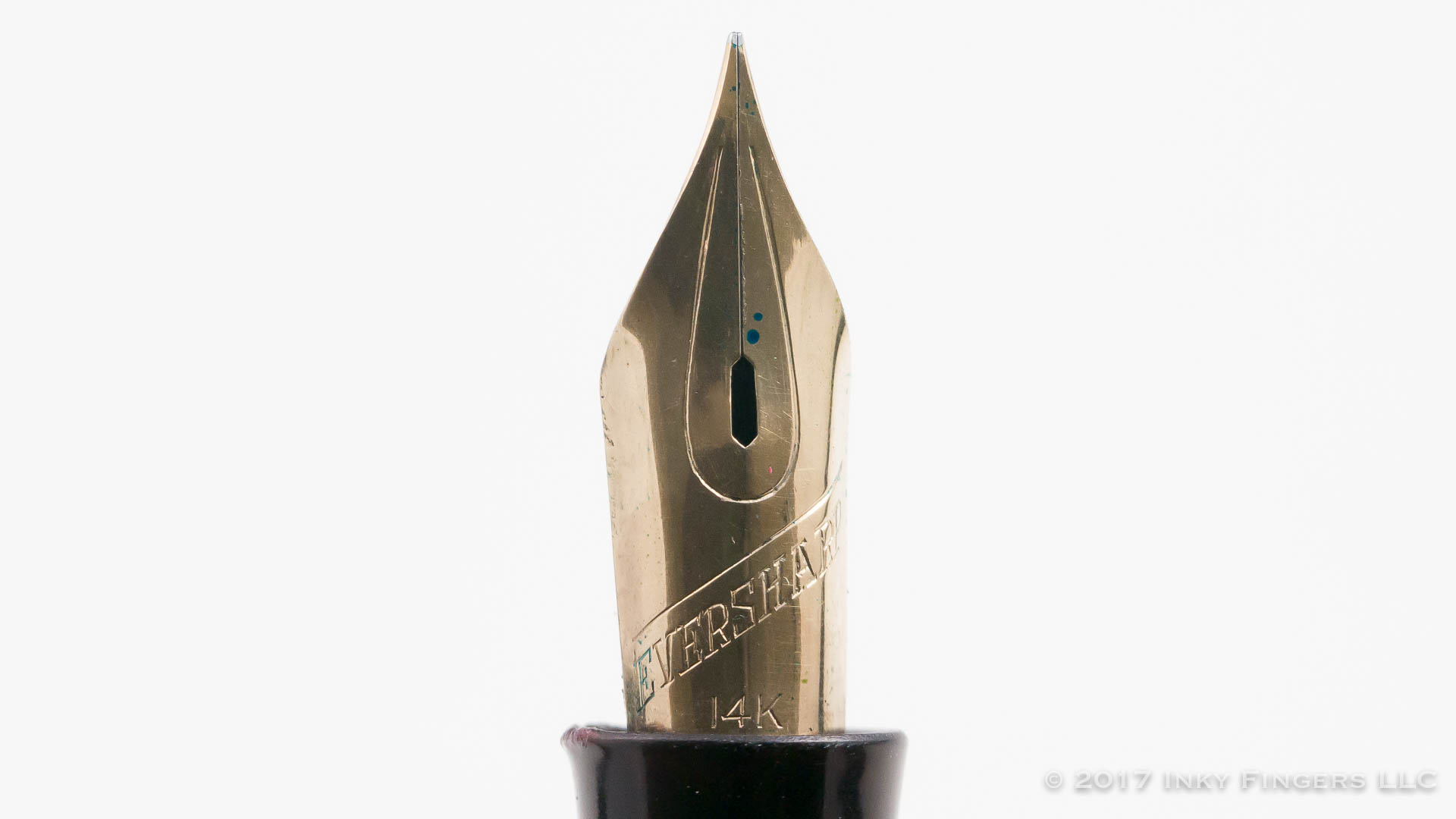 The nib is, in fact, one of the reasons why I believe that my Skyline is something of a frankenpen. The mismatched cap and barrel and the non-visulated section are clues, but the nib is another. The early, higher-end versions of the Skyline came with what’s known as a “teardrop” nib, so called due to the teardrop-shaped design stamped into the nibs face. I have such a nib in my pen, although it doesn’t seem as though it belongs. This pen was likely not one of the higher-end options, nor was it one of the very early options either. It’s something of a mystery.

Mysterious or not, however, the nib in this pen is glorious. It is a fully-flexible nib, with a remarkably smooth, fine point and a lovely spring-back. It is a spectacular writer, whether flexed or not. And I’ve never seen it choke on the ink flow or railroad. When people talk about how good vintage flex nibs can be, this is the kind of nib they’re talking about.

In the hand, the Skyline standard is remarkably well-balanced and comfortable. The bulbous, top-heavy cap can look a little out place when capped, but when posted, really gives the pen a wonderful look and feel. Coupled with a wonderful flexible nib and a feed capable of supporting it, I find this pen a lot of fun to use.

I overpaid for this pen when I purchased it. I got the pen and a partially incomplete pencil in the original box for $90. The pen needed to be repaired to be writable, which I did myself. Even still, the pen wasn’t in spectacular cosmetic condition, and probably isn’t worth what I paid for it, even now that I have it writing again. Nevertheless, it’s a blast of a pen to use.

Not everyone loves the post-deco design of the Eversharp Skyline, but it was unique and groundbreaking for its time. And with literally hundreds of combinations of materials, nibs, and sizes, the Skyline is a pen that is easy to become fascinated with. I have a soft spot in my heart for them: my grandmother used a Skyline Demi for most of her life…a pen I still have in my collection. They’re wonderful writing instruments, and a fascinating look into the fountain pen world in a time just prior to the introduction of the ballpoint.