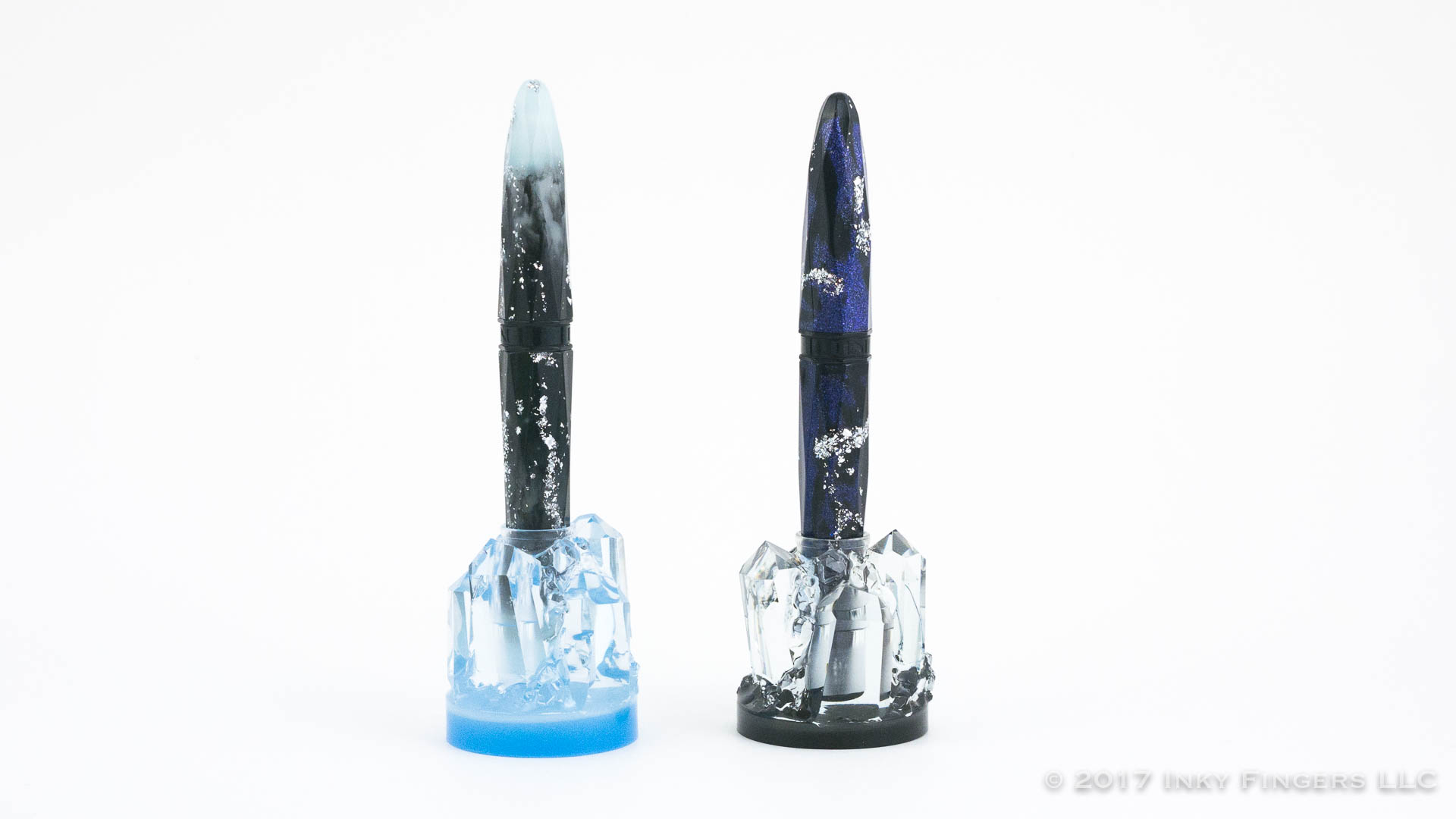 Fountain pens have been around for a long time, and in many ways, have moved through the product development cycle into what we in the software industry call “steady state.”  There’s generally not a ton of innovation, either in terms of functionality or design; those innovations that do happen are not always adopted by the larger market. Most modern-day fountain pen “innovations” are built upon a shared foundation of pretty standard characteristics that make it very easy to categorize them together: cigar-shaped pens, flat-topped pens, etc. You can get differences in hardware, size, materials, etc. It’s rare that you see a completely different design, though. 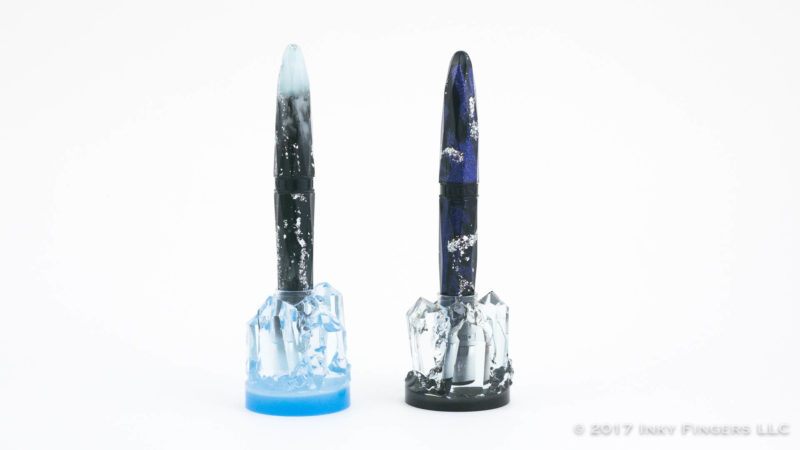 That’s one of the things that impressed me the most about the http://penhabit.com/couple-dates/ when it started making the rounds in the online fountain pen community earlier in 2017. Benu Pens is a Russian-based company–in itself a rather unusual thing in our community–making pens with really unique designs out of even more unique materials. There really isn’t anything quite like these Benu Pens designs on the market right now. I appreciate the uniqueness.

The Benu Briolette is, in its most abstract, a cigar-shaped or torpedo-shaped pen. Rather than a pen with your traditional, smooth finish, however, this pen is covered with large, diamond-shaped facets which give the pen a very unusual look. The facets are well cut, and the result is a pen that is a lot of fun to spin around in the light. The facets also keep the pen from rolling around the desk, which is nice, as there is no clip or roll-stopper to otherwise distract from the finish.

The pen’s faceted shape is enhanced by the very unusual resins from which it is made. Benu sent two versions of the pen over to me: a purple, black, and silver material they called ‘Milky Way’ and a blue-white, silver, and black material they call ‘Luminous Blue’ (which glows in the dark). The materials are custom-made for Benu, and aren’t available anywhere else. And there are a lot of variations. At the time of this writing, there are 13 different materials for the Briolette alone, each one vibrant and really unique.

This material is a lot of things, but subtle is not one of them. These pens sparkle something fierce. They’re quite glittery–which is not everyone’s thing. In the Milky Way (pictured above) the swirls of purple glitter are quite vibrant, with very fine particles in them. The brighter silver glitter contains much larger pieces that really stand out and sparkle in the light. This type of material is certainly not going to be for everyone, but if you like things that sparkle, this may be the material for you. 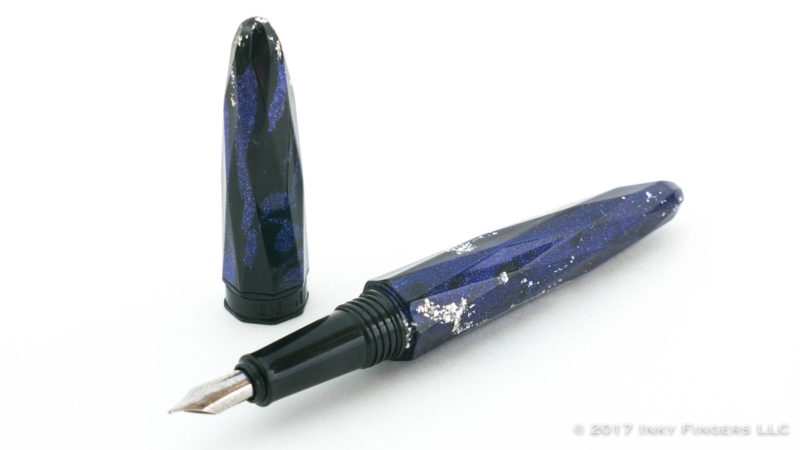 The pen’s cap is clipless, and the facets match up well with those on the barrel of the pen. The only real marking on the pen is the name “BENU’ in art deco lettering on the black resin cap band. Under the cap, there is a slender black section which tapers down to a #5 Schmidt nib. The section unscrews from the barrel on well-machined threads to expose a standard international converter, also of Schmidt manufacture. 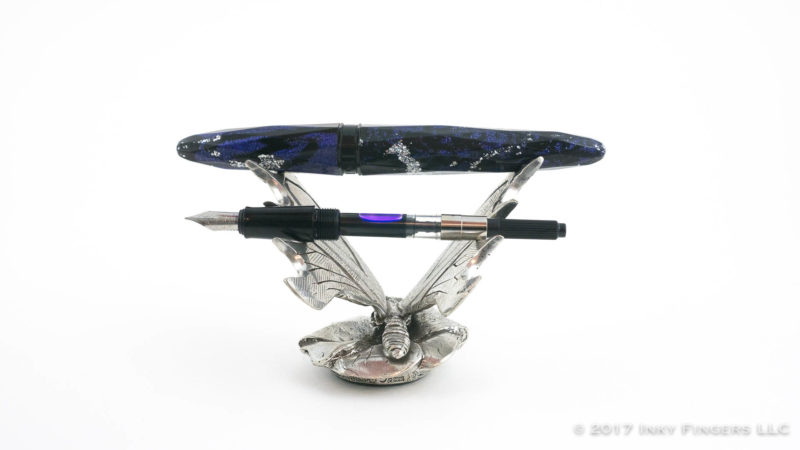 The pen itself is well-machined and well-finished. The pen has a bright, luminous polish that shows off both the sparkle of the material and the intricate faceting of the body. The threads are smooth. I believe the pen probably can be used as an eyedropper if you so chose, but I would personally recommend a liberal application of silicone grease on the threads between the barrel and the section; they don’t feel quite as tight as they could for eyedroppering. (Insert standard disclaimer here that I don’t eyedropper my pens and so did not test the feasibility of eyedroppering this pen.) 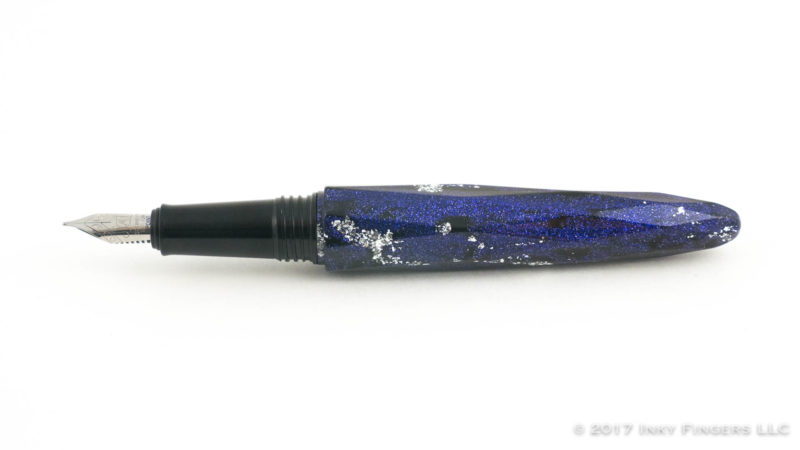 In the hand, the overall ergonomics of the pen are good considering it is a somewhat unusual shape. Due to the “seamless” transition between the cap band and the barrel when capped, there is a relatively decent step-down from barrel to section. However, the section is long enough that the step-down never got in the way of my grip. In fact, I never even had to rest my grip on the threads–a pretty common occurrence for me as I tend to like to hold the pen further up the section. The pen is also long enough to use unposted, which is nice, since posting this pen isn’t an option.

The section itself is a bit on the narrow side for my tastes, but only just. Even though it does tend to run a bit slim for me, it was comfortable to hold, and I was able to use the pen for long periods without any difficulty. 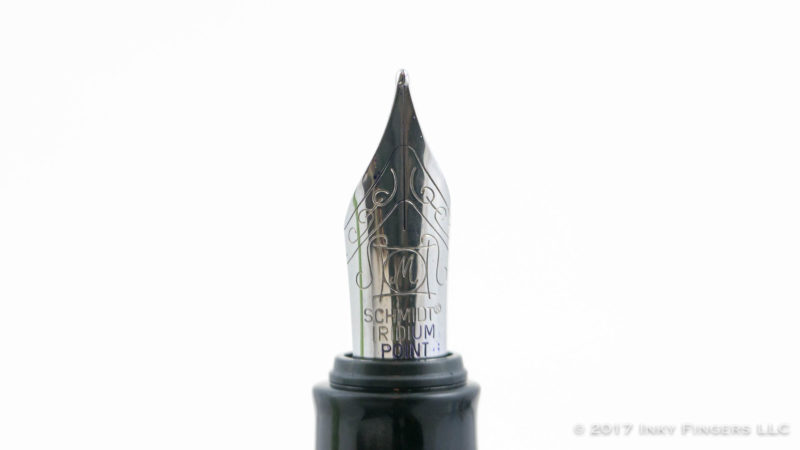 Benu has opted to go with Schmidt nibs in their pens. During my time in the hobby thus far, Schmidt nibs have not been considered among the best of the third-party nib manufacturers, and few companies use them regularly. (The only other one that I can think of off the top of my head is Retro 1951.) It can be hard to track down the origin of these Schmidt nibs, but according to some posts I’ve seen in the forums, Schmidt may not manufacture its own nibs any longer. It has been asserted that they purchase their nibs from Bock or Jowo, and assemble them with their own feeds, collars, etc. I have no easy way of confirming that, but I will say this: these nibs are quite good, but kind of pedestrian, writers.

The #5-sized steel nibs have the Schmidt Iridium Point markings, and lack a breather hole. They’re set pretty deeply into the pen’s collar. Both version of the Briolette I received had a medium nib, and both wrote pretty well out of the box.  (Certainly as well as most Jowo or Bock steel nibs I’ve received.) The nibs do tend to run a touch on the dry side, and have a bit more feedback than I prefer in my nibs, but nothing that I would consider unpleasant. It is also nothing that couldn’t be resolved with a minor adjustment on some Micromesh™.

I did run a test with the Milky Way version of the pen, inking it up and leaving it unused for nearly two months. The pen wrote immediately after that resting period, but I did find the ink flow to be a bit less reliable. You’re not going to get the kind of air-tightness you’d see on something like a Platinum 3776, but I was impressed that I didn’t have any issues with the pen writing improperly after a long rest period.

In general, I have to say that I was impressed by the Briolette from Benu Pens. It’s not my type of pen. (I’m all for chatoyance and sparkle, but I’m not a huge fan of glitter, and these pens are glittery.) But I love to see manufacturers coming up with truly unique designs and materials, putting together well-made pens, and–perhaps most importantly–selling them at a really reasonable price.

Benu lists the Briolette on their website for between $65 and $70. You can choose between Fine, Medium, or Broad nibs. The pen can come with a blue ink cartridge, or for $5 more, a Schmidt converter. (Schmidt makes some of the best IS converters on the market, in my opinion.) The Briolette can also come with a lovely pen holder made out of a clear acrylic and meant to look like a piece of rock crystal. I actually really like the look of these pen holders, and how they show off the Briolette…especially the holder for the Luminous Blue model, which also glows in the dark. 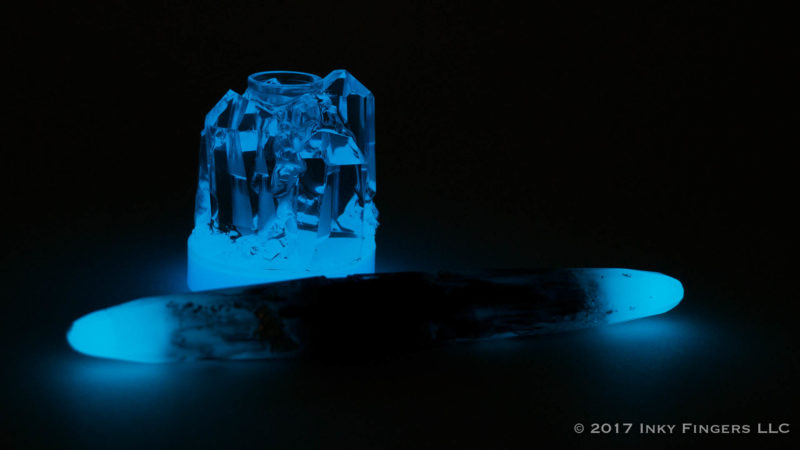 The pen holders add $25 to the price of the pen.

At $65+, the Briolette is a pretty good value in the fountain pen world. It’s one of those rare pens that sits in between the entry level options like the Pilot Metropolitan, Lamy Safari, or Faber-Castell Loom and the intermediate, gold-nibbed pens from Pilot, Lamy, or Platinum. It’s a good writer, comfortable in the hand, made of unique materials, and featuring a very unusual design. It’s not going to be a pen for everyone, but I suspect it will have a combination of attributes and features that will appeal to a lot of people: especially at that price.

The pens for this review were provided free-of-charge by Benu Pens for review purposes and giveaway to Pen Habit viewers. No additional compensation was provide. All opinions expressed in this review are my own.