Matt Posted on February 22, 2018 Posted in Pens, Review No Comments 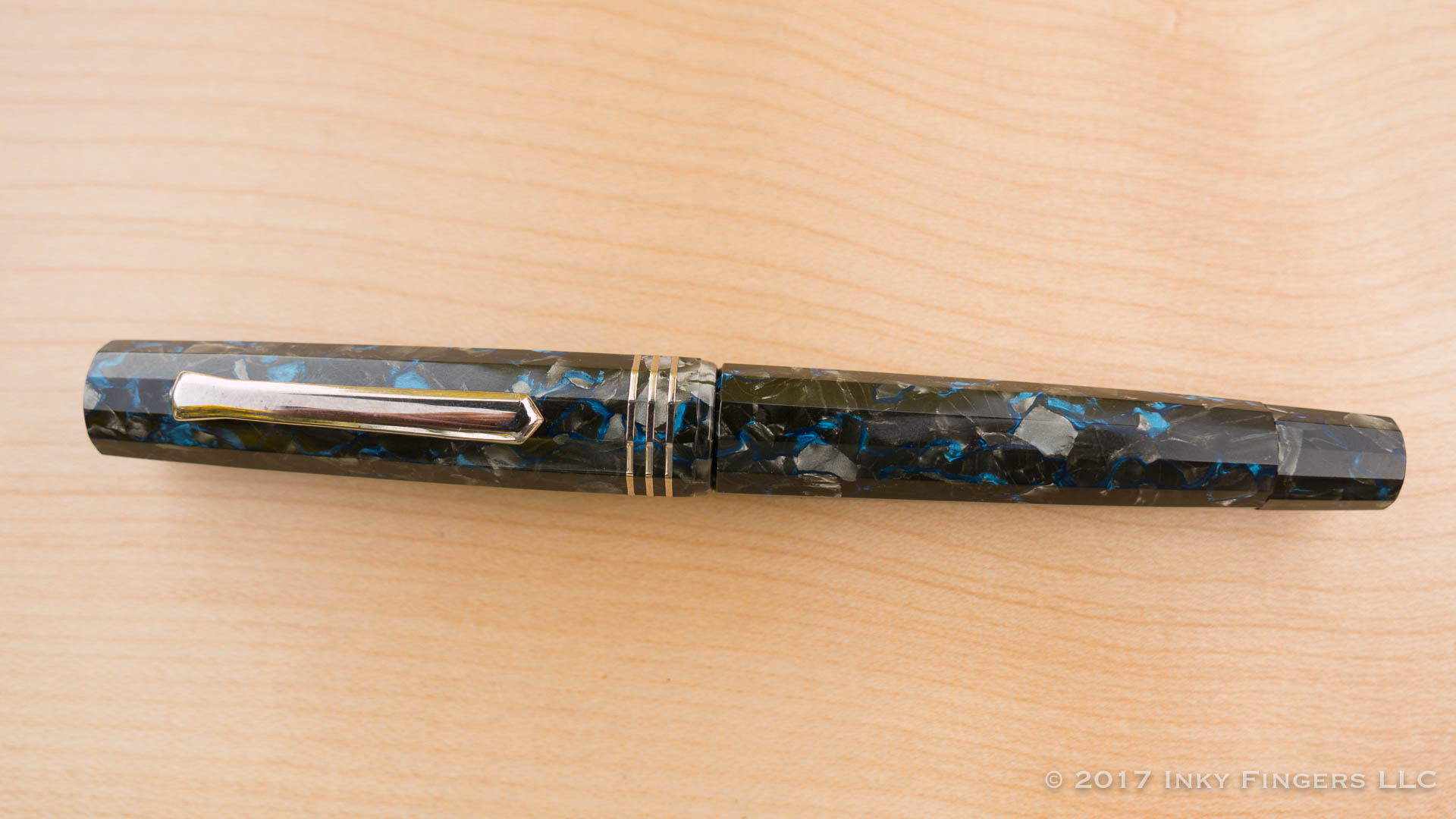 Italian fountain pen manufacturer, Tibaldi, doesn’t have the name recognition of other, more popular, Italian brands like Aurora, OMAS, or Visconti. When it is spoken of these days, it is almost always in reference to a particular celluloid that was used in one of its pens from the early 2000s, the Impero. This celluloid, which is a silver-grey flake celluloid, is veined with the most vivid electric blue–a deep, rich cerulean that almost feels as though it glows from within. It’s quite unlike almost anything else on the market. And it’s as stunning to behold as it is difficult to photograph. 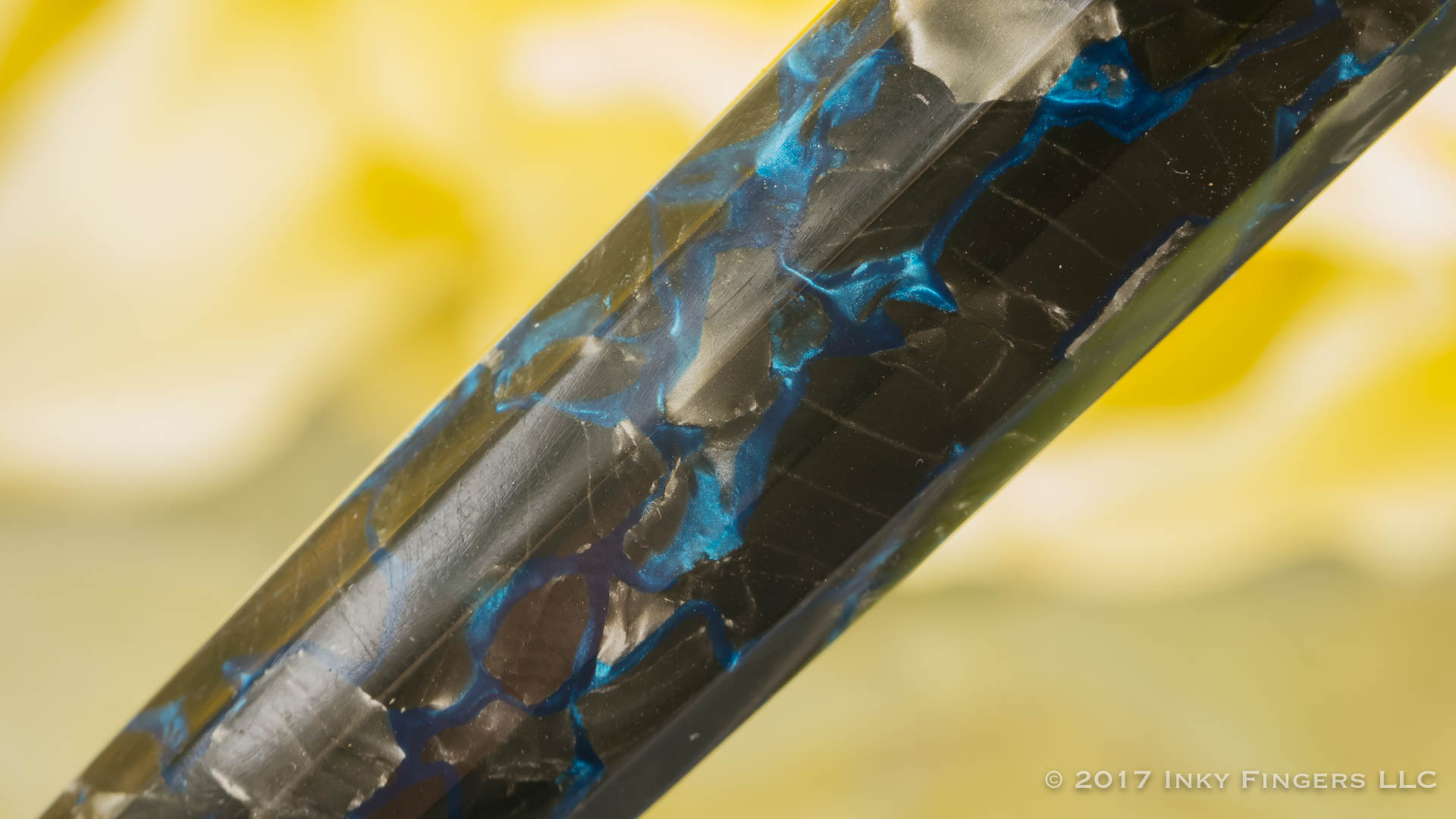 Tibaldi started manufacturing fountain pens in 1916 and remained in production until they closed their doors in 1965. In the early 1990s, the Tibaldi name was rebooted, and the new company began producing high-end, limited edition fountain pens that sold for quite a lot of money. The company hit financial difficulties (as seems unfortunately common with many popular Italian pen manufacturers) and closed its doors again in 2001.  Finally, the company was rebooted a third time in 2006 and has remained a relatively obscure manufacturer of extremely expensive pens ever since.

The Tibaldi Impero, the pen which is the subject of this review, was produced during the middle period. Originally intended to be a limited edition of 500 pens, the Impero began to make appearances in 2000 and into 2001 before Tibaldi shut its doors. When the company went under for the second time, folks swooped in to purchase the remaining inventory, parts, and celluloid rod stock.

As for the original Tibaldi Impero, nobody really knows how many pens actually made it through production under the Tibaldi banner. A certain number were released as part of a numbered edition by the company prior to closure. These generally come with original Tibaldi packaging, are numbered (a number prefaced with an E or an I which indicated the language of the included literature–English or Italian), and with a Tibaldi-branded nib.  Pens released after the company’s closure were often assembled from leftover parts. They may not have come with packaging. Often they were unnumbered. Sometimes, they featured nibs that were not Tibaldi-branded.

The celluloid rod stock is an even more interesting saga. For years, Impero celluloid showed up in special edition pens from companies like Bexley, and as a material for one-off creations by custom pen makers. The Impero celluloid has developed an almost mythic reputation in the fountain pen community, and a quick http://penhabit.com/most-used-dating-apps/ will bring back hundreds of different pens featuring this lovely celluloid. These days, finding rod stock of Tibaldi Celluloid is increasingly difficult, as it has been sought after for years. In those rare instances where it can be found, it often goes for hundreds of dollars per rod, and it is portioned out into pens with dating as a jehovah's witness.

At the LA show in 2016, I happened across one of the rare Tibaldi Impero originals. In its original case and including a booklet, this lovely pen was numbered E040 and featured the Tibaldi-branded nib. Entranced by the material, and jonesing for such a highly sought-after pen, I plunked down quite a lot of money and purchased it on the spot. 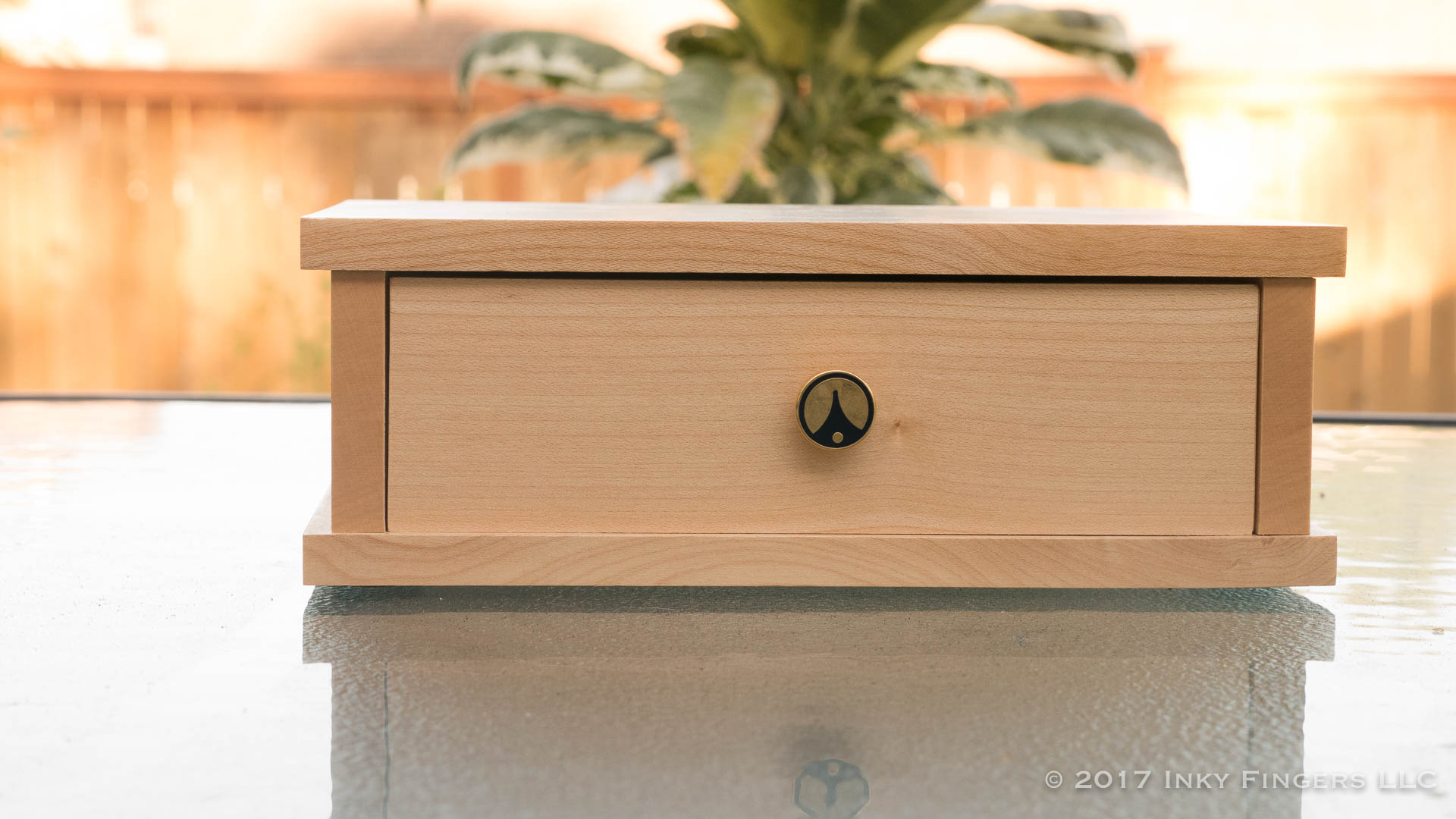 The Impero came is this heavy wooden box made out of a light colored wood, and featuring a Tibaldi logo drawer pull. Opening the drawer reveals a satin-lined platform featuring the pen and a bottle of Tibaldi ink. The satin tray can be removed to reveal a 7-slot pen case drawer, which officially makes this the single most functional piece of pen packaging in my entire collection. The box also comes with a booklet shaped like the cap of the Impero. (The dahlia is not included with the original packaging, unfortunately.) 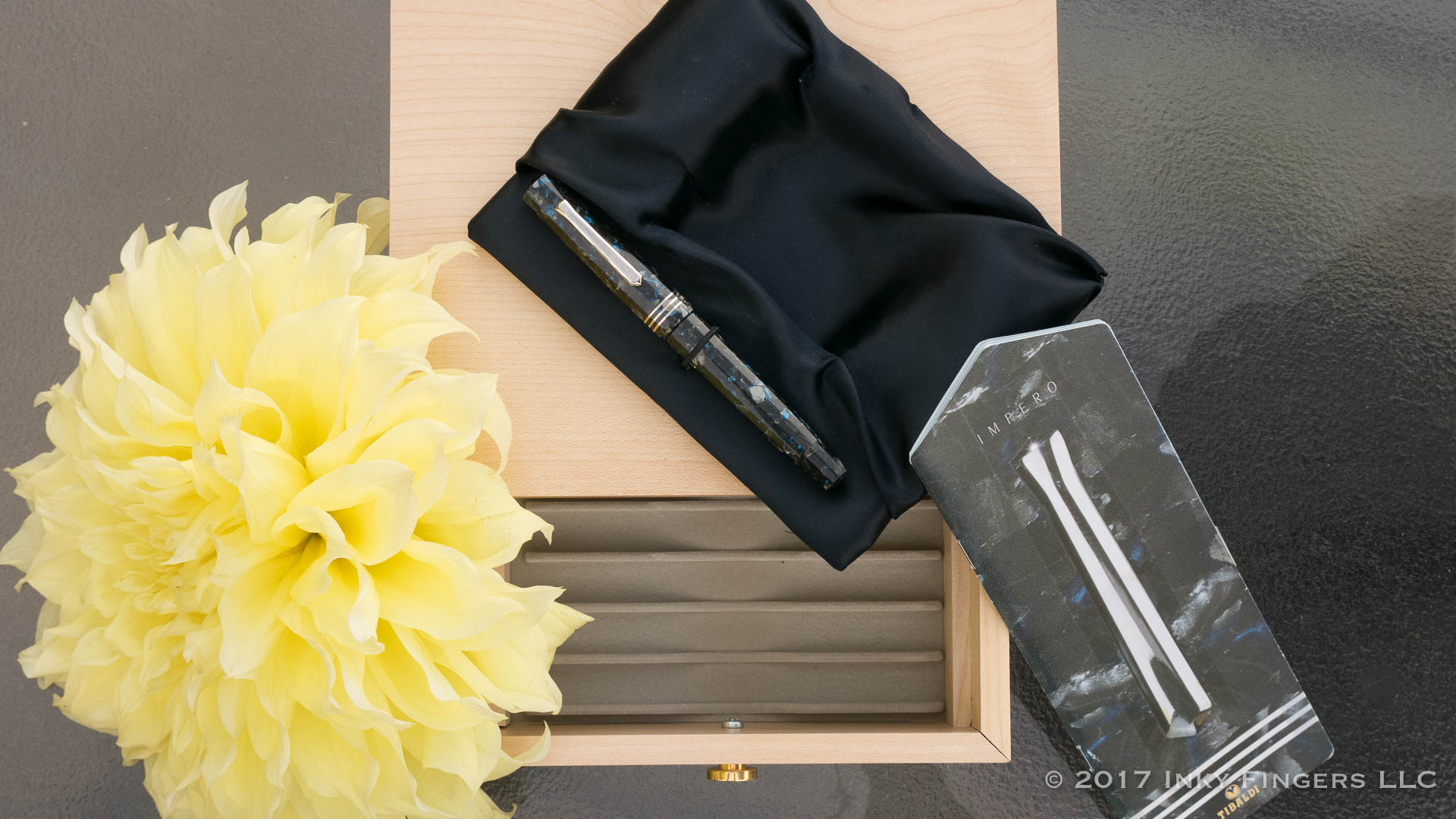 The pen itself is simple but beautiful.

It has a very classic, faceted design with slight points on the cap and piston knob. The silver-colored clip looks like a man’s necktie, and the cap features a triple cap band which lines up wonderfully with the facets of the material.

The material is, of course, the star of this show. It’s stunning–deep and rich, and remarkably difficult to capture in photographs. It’s completely mesmerizing to behold, regardless of whether it is in a true Impero or some other model using the celluloid. It’s a real shame that nobody is making this material any longer. (The inside of the cap even still smells of camphor, showing you it’s the real celluloid, cellulose nitrate.) 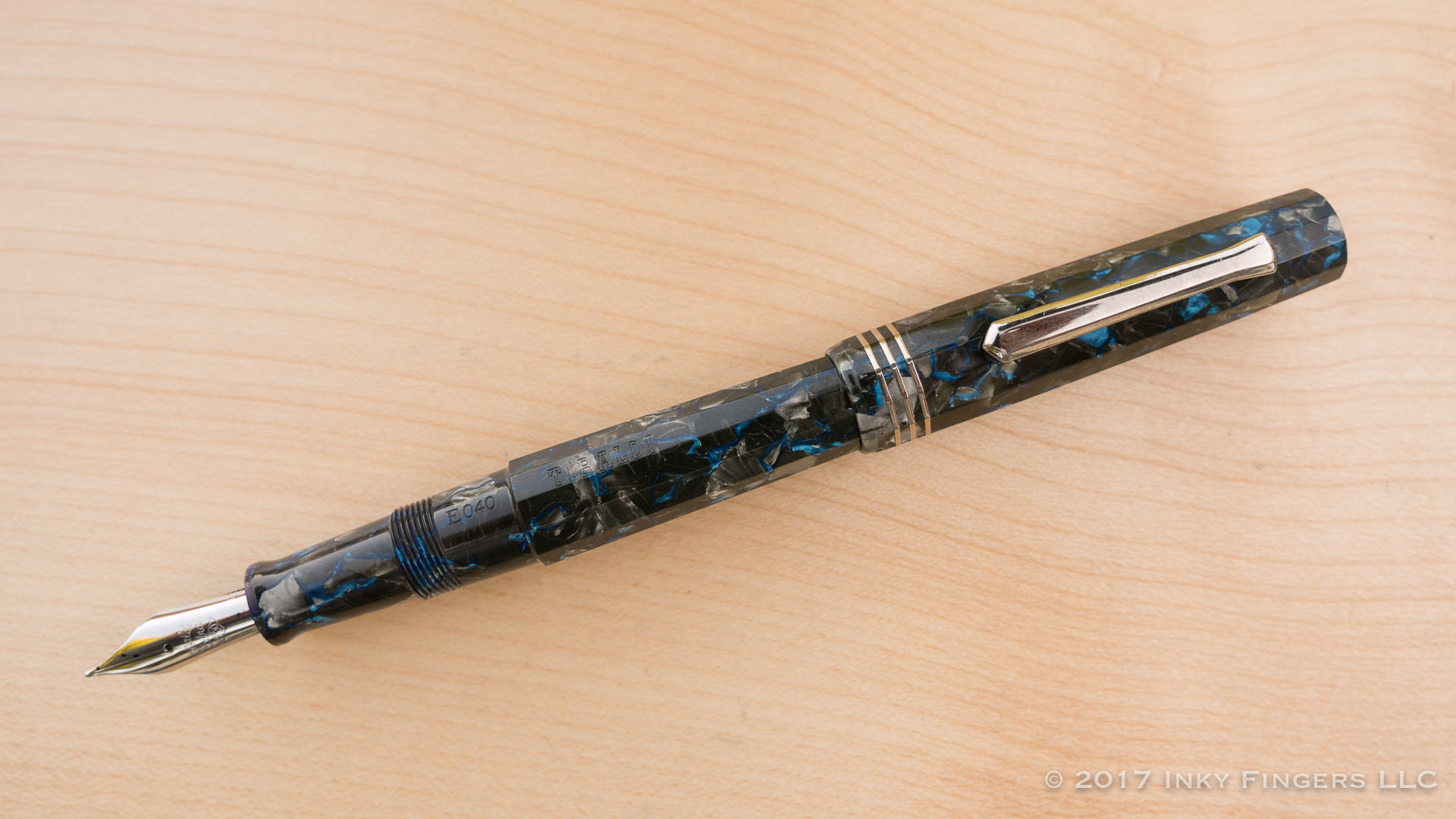 Under the cap, there the one real design flaw of this pen, a trait that is shared on a very similar-looking pen from another Italian manufacturer, the OMAS paragon. They put the threads smack dab in the middle of the section. Why in the world anyone thought this was a good idea is beyond me. Fortunately, the threads aren’t sharp and the nib and feed are set shallowly enough I was able to comfortably grip the pen on the lower part of the section without having to grasp the threads directly. The limited edition number is stamped on the upper section. 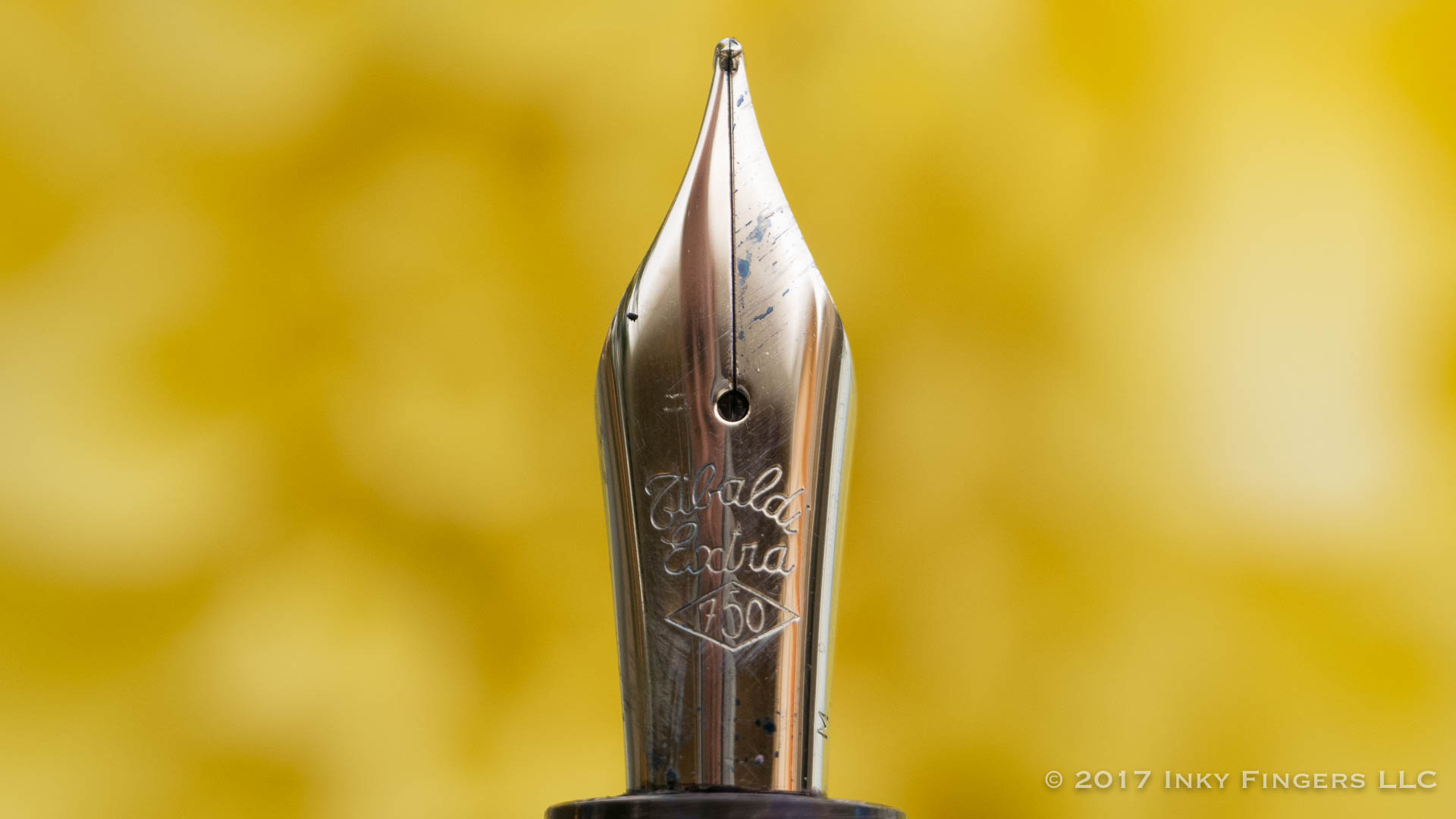 The pen features a Tibaldi Extra nib in palladium-plated 18k gold. It’s a pretty standard #6 Bock-made nib, which made it pretty easy for those folks who sold the remaining inventory of Imperos from the factory closure to fit compatible nibs on the pen. The nib that came with my pen is a medium.

The Tibaldi Impero is a piston-filled pen, operated by the faceted knob on the bottom of the barrel. This pen had a slightly sticky piston when I received it–unsurprising for a pen that was nearly 15 years old and had never been inked. I was able to remove the section with a pair of section pliers and lube up the inner walls of the pen barrel to get the piston flowing smoothly again. Since then, it’s worked like a charm. The pen’s piston parts are made of plastic, not metal, so they have a lighter-weight feel to, say, a piston filler like the Pelikan M800.

Aside from the idiotic placement of the threads, this pen is extremely comfortable in the hand. It’s a larger pen, but moreso in length than in excessive girth. (The section’s diameter is an extremely reasonable 10.8mm) It can be posted, but I find posting makes it far too long and unwieldy.

I wasn’t in love with the pen’s writing performance out of the box. It was fine, but a bit rougher, drier, and inconsistent than I like. I was originally pretty disappointed in that. (See also: all my previous rants about how a pen this expensive should just write.)  I was, perhaps hypocritically, willing to give it a bit of a pass because I was after the body of the pen as much as the writing experience, and was able to get it worked on by my favorite nibmeister, Mike Masuyama. After Mike’s magic touch, the pen was a smooth, wet, wonderful writer. These days, I almost always have it inked. It’s one of my favorite pens. 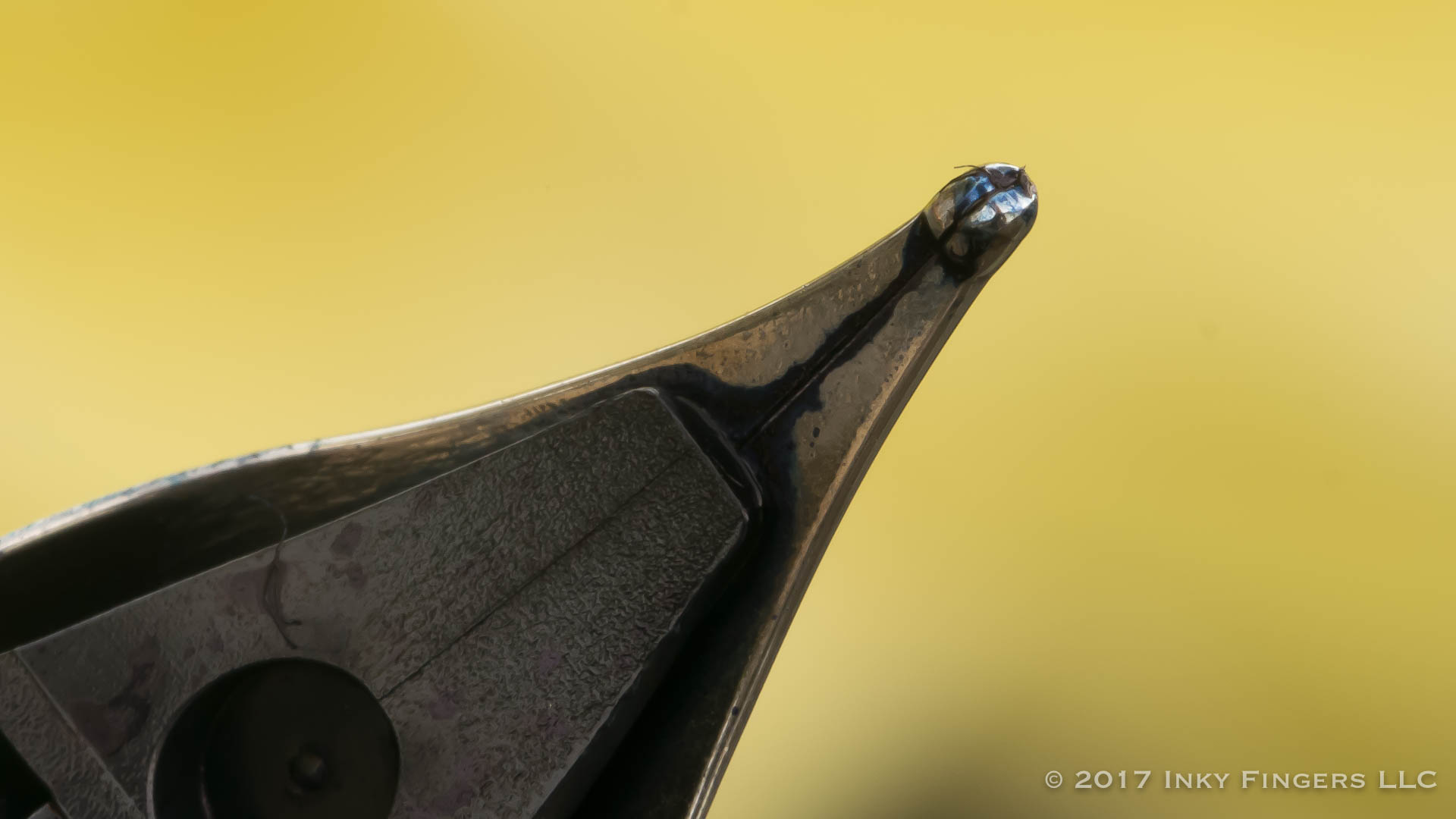 If you can find an original Tibaldi Impero these days, you can expect to pay a hefty chunk of change. (It’s getting to the point that you can expect to pay a hefty chunk of change for any pen made of Tibaldi Impero celluloid, let alone an original Impero.)  This pen was sold to me for $1,200…a far sight more than most people are willing to pay for any pen. I can’t say, necessarily, that the pen is worth that much–it is a pen after all–but I don’t regret having spent the money on this pen. I’m certain that I have devalued the pen by having the nib adjusted, inking it up, and using it on a regular basis. I don’t care, though. I love this pen. This is one of those pens that just makes me happy every time I pull it out to write.