Matt Posted on February 27, 2018 Posted in Pens, Review No Comments 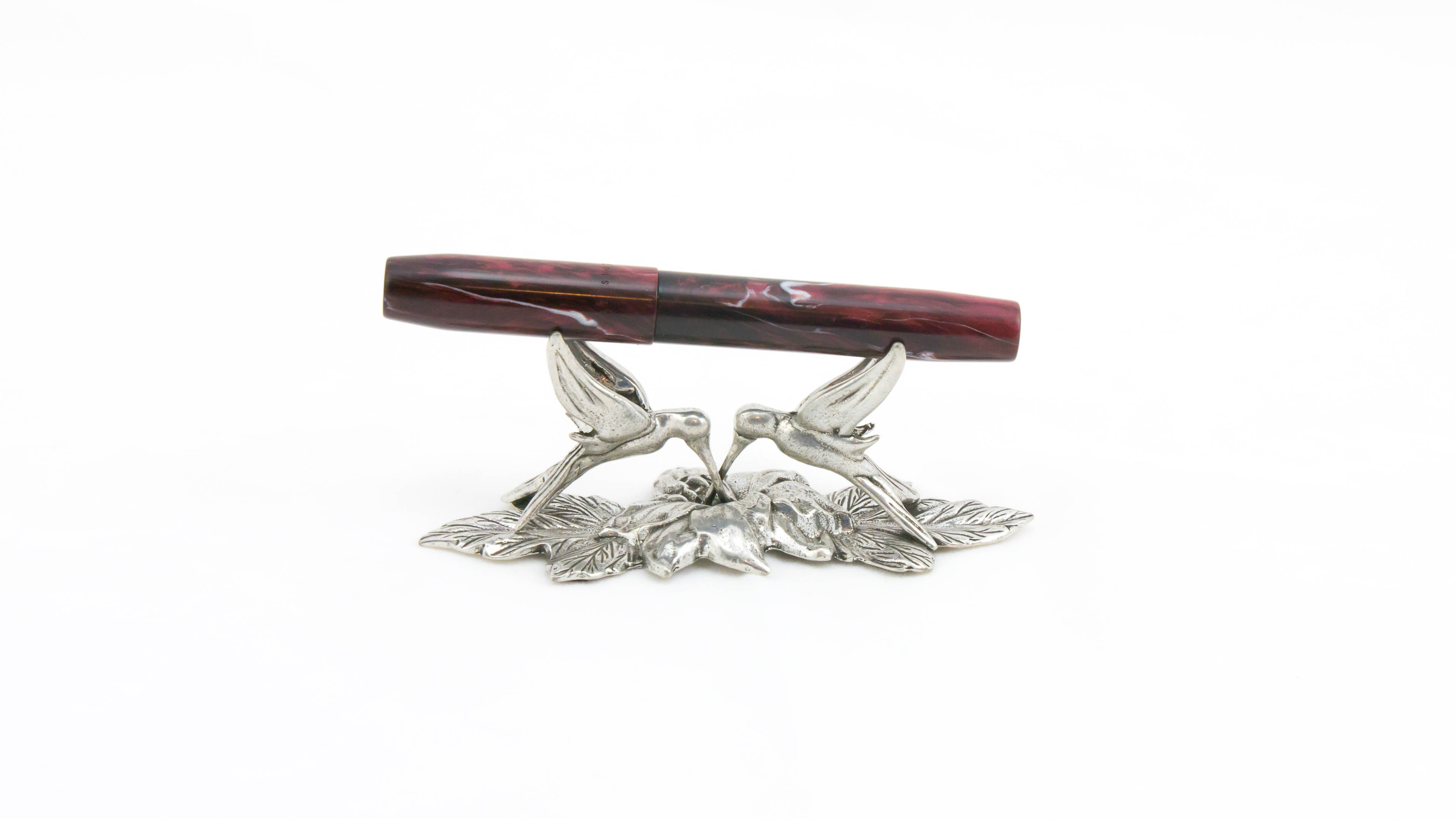 It’s fair to say that I’m not a fan of pocket pens. If you take a look at last year’s top ten list, all ten pens would be considered large, with a  good half considered “oversized.” I like big pens and I cannot lie.

Part of that is because I have decent-sized hands. My hands aren’t huge, but I’ve got long fingers which certainly helps with playing the piano but gets in the way of using small pens. I find larger pens are more balanced when they sit in my hand. I also find that the wider diameter keeps me from death-gripping my pens, which is often a problem for me. (I’m a tense kind of guy.) I also have a fairly deep aversion to anything that people might call “cute,” unless it’s a furry baby animal of the domesticated pet variety. No Kakunos, Safari’s with cartoon bears, or candy-colored Hello Kitty fountain pen confections for me, thanks.

Put it all together, and I just don’t find myself drawn to pocket pens. No Kaweco Liliputs or Sports. No Pilot Petits. No TWSBI minis. I don’t really even like Pilot Metropolitans. (Too small.) I don’t enjoy using them. I don’t find them attractive. And they don’t fit in my hands.

So, when one of my pen friends dropped a http://penhabit.com/safest-online-dating/ into my hands at a local meet up, I was rather uninterested in it. Then I started using the pen. You guys. Franklin-Christoph has managed to design a pocket pen that even I enjoy using. It’s a Festivus miracle.

The F-C 45 is a small, relatively featureless pen. At only 112 mm in length, it’s quite short when capped, and even shorter (104mm) when uncapped. The pen is almost perfectly cylindrical, with slight tapers to terminate in completely flat ends. It doesn’t come with a clip. There’s no exposed hardware. The only decoration aside from whatever material used to construct the pen is a laser-engraved Franklin-Christoph logo on the top of the cap, and the pen’s name and model edged around the cap lip.

If you’re not familiar with Franklin-Christoph’s methods for picking material, let me give you a quick rundown. Generally speaking, F-C has a small number of materials that they use as standard production colors for each of their models. Occasionally, they will also have runs of special materials that will pop up on their website. (Some of their “glass” and “ice” finishes fall into this category.)  Then there are the color prototypes…and this is where F-C plays a very smart game.

At any pen show attended by Franklin-Christoph, one of the must-attend events to kick off each day of the show is the company’s unveiling of trays of color prototypes. Pen fans gather ’round the table as they pull out trays of their standard production models in a rainbow of colors and materials. Usually, there are only two or three of these prototype colors, and folks swoop in to buy colors they love/want/need. It’s a sight to behold. Then, whatever isn’t sold at the show will often show up on the website in the closeout area or will be saved up for the next pen show. It results in Pokémon-like “gotta catch ’em all” furvor amongst the community.

I’ve never been fortunate enough to be able to attend the descending of the locusts in the morning of a pen show…I’m usually working at another booth. But I do take 30 minutes during the day and visit the booth to see what’s left over. That is where I found the Model 45 used in this review. It’s made from a Jonathan Brooks Alumilite resin that, as far as I know, doesn’t have an official name (and which I have unofficially dubbed “Cherry Cola.”) It’s a lovely material: deep maroon red, brown, and black swirled, shot through with a few streaks of white “carbonation.” And while polished, it doesn’t have that mirror shine that some acrylics and resins do. More like a semi-gloss, which I actually like. 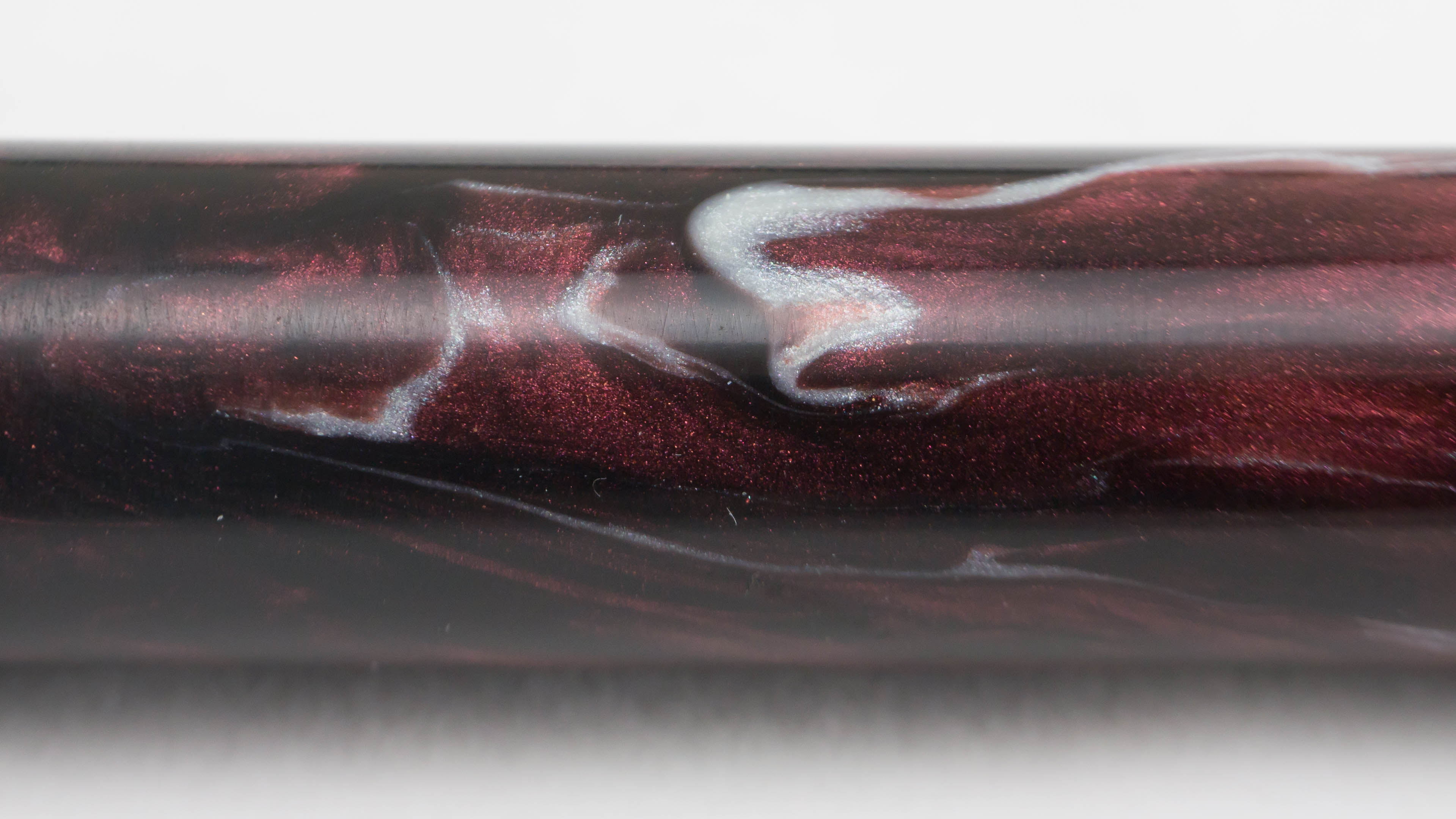 The pen itself is made to exacting specifications, which is something I find to be true with every Franklin-Christoph pen I’ve ever held in my hands. The quality of the finish is top-notch.

The cap is held on using the same block threads that can be found across many of Franklin-Christoph’s models. The threads are at the very edge of the section (like with the Model 02) which keeps them out of the way of my grip. (If you’re the kind of person who likes to grip the pen right down at the very edge of the section by the nib, the placement of these chunky threads might annoy you. I find it a brilliant placement.) 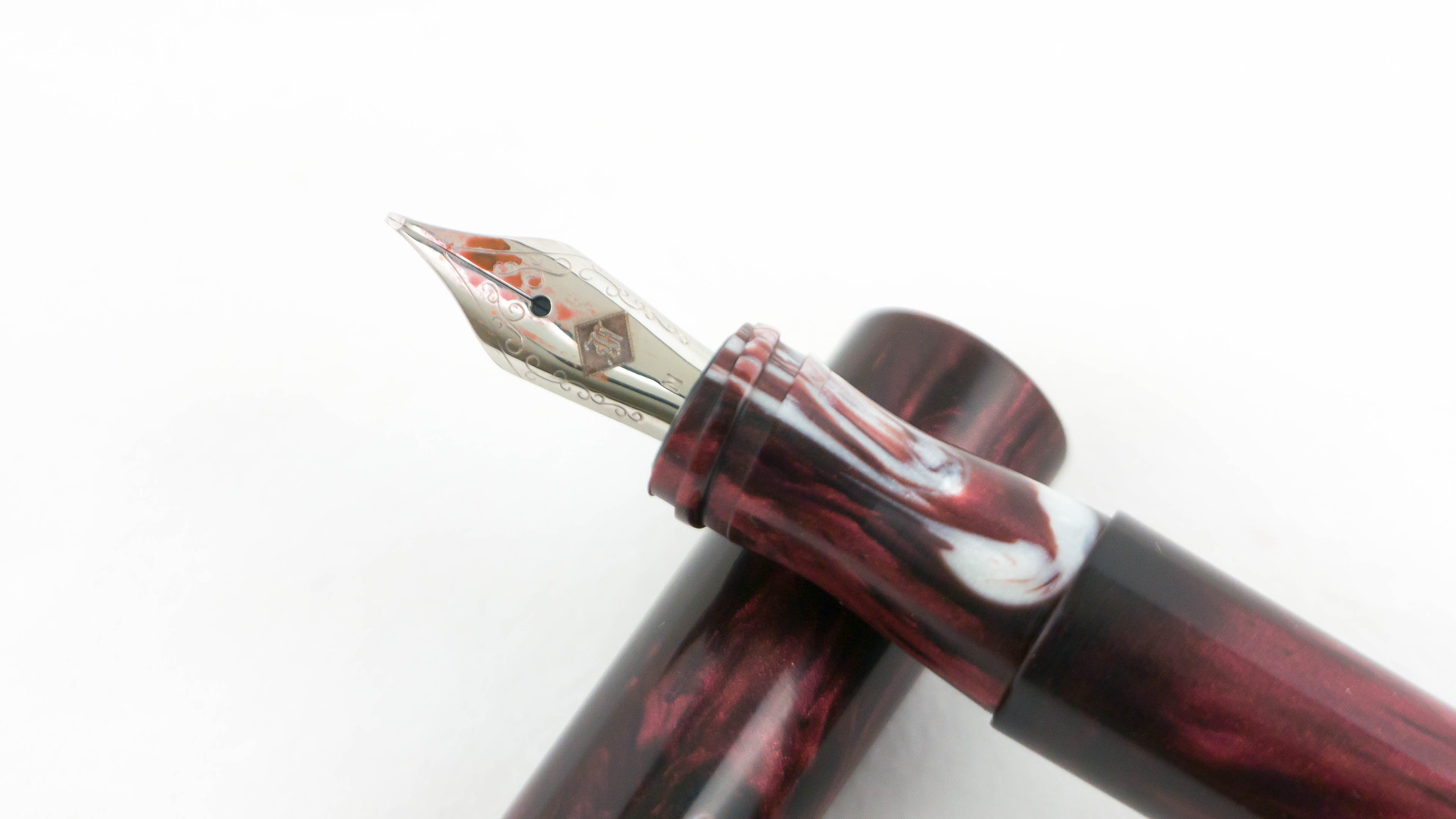 Under the cap you’ve got a nice, concave section. Being a pocket pen, the section is a touch narrower than I’d like but much larger than you’d expect for a pocket pen like this. I mean, it’s actually comfortable for me for use. Me. The guy who hates pocket pens. 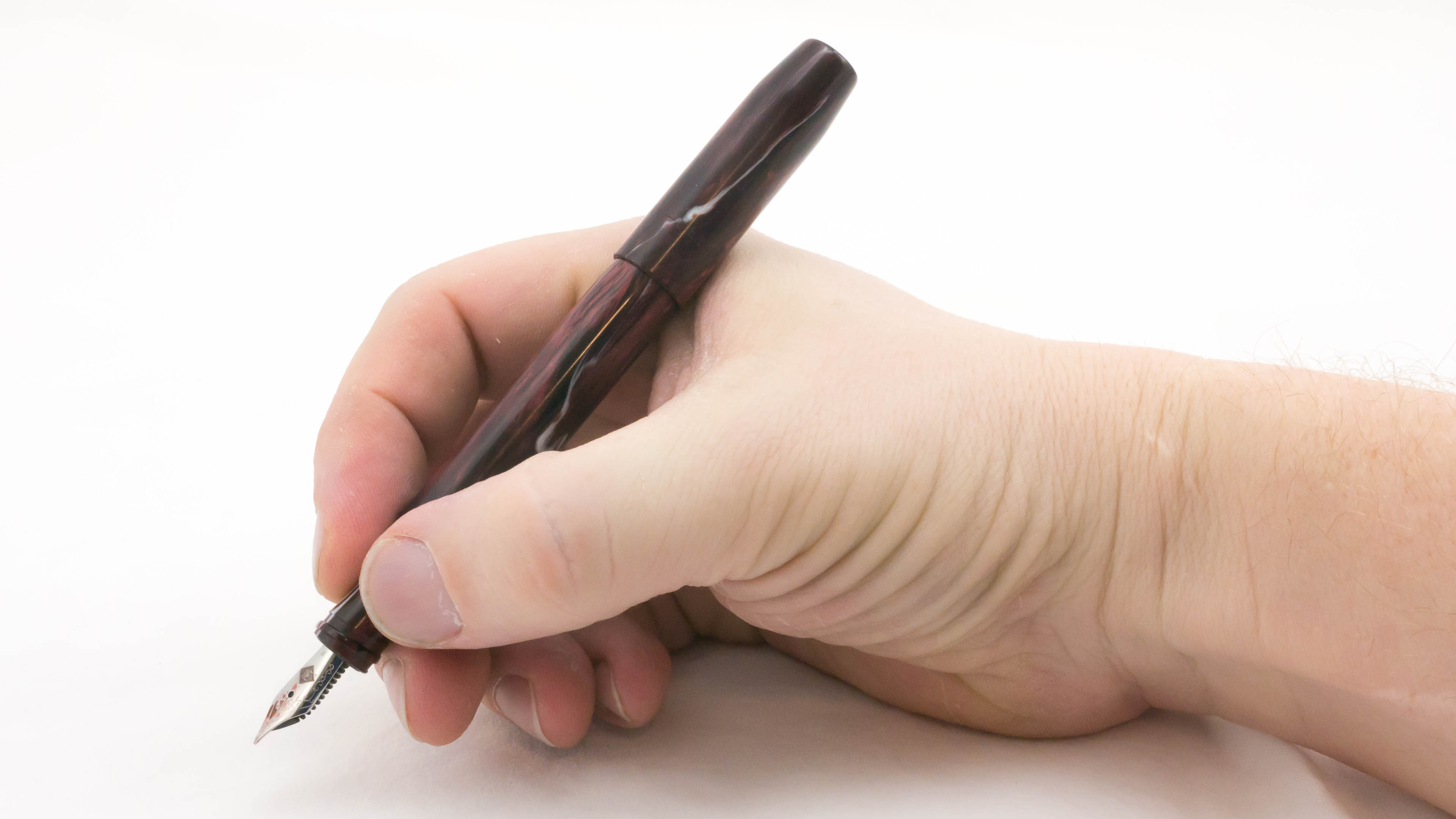 Now, don’t get me wrong. This is a very short pen. I can’t use it comfortably unposted. The pen can be posted easily via friction, however. (No threaded posting! Huzzah!) When posted, this pen stops feeling like a pocket pen and actually feels more like a full-sized pen. Despite its smaller length, the diameter is still wide enough that the pen nestles into my hand beautifully. The posted length results in a nearly perfect balance.  And, of course, being made of Alumilite, the pen is very, very lightweight.

Now, this pen is short enough that you can’t use a standard-sized converter with it. It can take standard international short cartridges and some of those miserable, low-capacity mini-converters. But this is one of the few pens that I actually prefer to eyedropper. Fortunately, the manufacturing tolerances on this pen make for a really wonderful eyedroppered pen.  The threads between the section and barrel are long, smooth, and extremely tight. The threads between the section and the nib unit are as well. I’ve eyedroppered this pen several times, carried it in my backpack and pocket, and have never once had it leak on me. 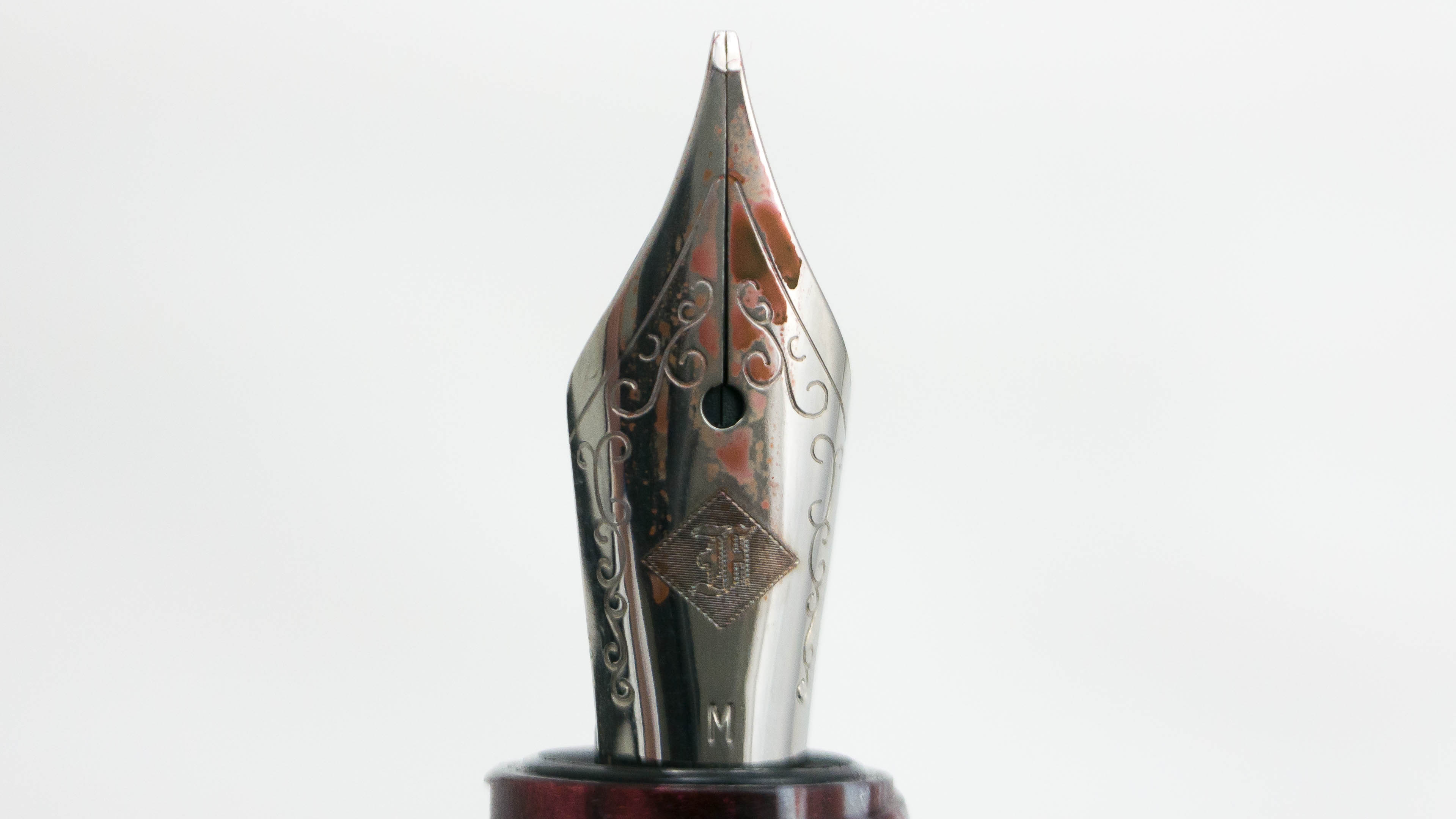 As a pocket pen, the F-C 45 uses a #5-size nib. At the Chicago show where I purchased this pen, I originally requested a 14k gold nib with Franklin-Christoph’s SIG nib grind. (Stub-italic gradient—this is Jim Rouse’s version of a cursive italic). After speaking with Jim, however, he said that for the #5-sized nibs, he actually prefers the steel nibs for SIG grinds. So, medium SIG in steel it was. 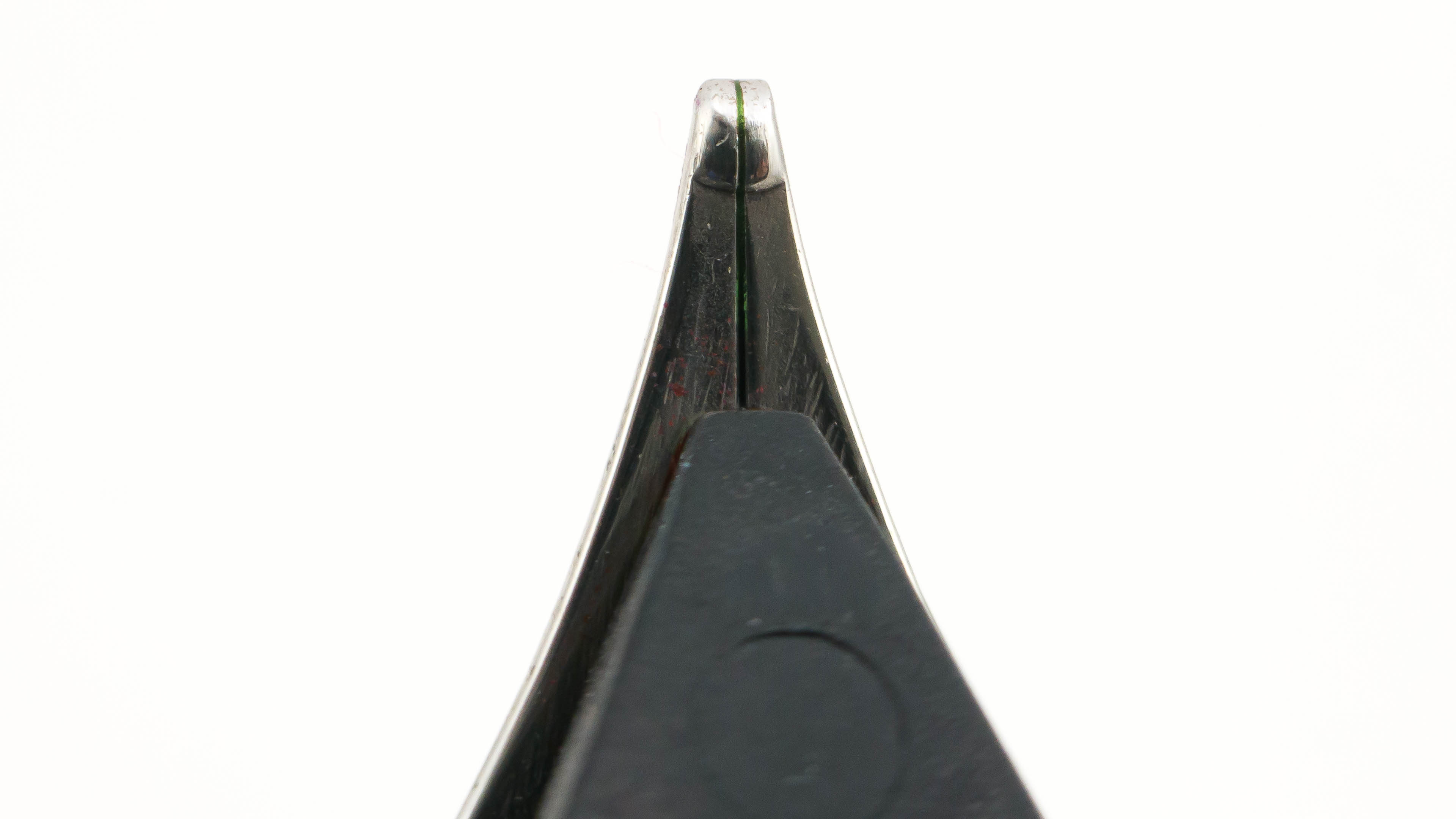 If you’ve been a follower of mine for any length of time, you know I’m not drawn to flat nib grinds like stubs and italics. I tend to rotate my wrist as I write, and to apply a bit more pressure than I should, which makes flat nibs problematic for me. But there’s something about Jim’s grinds on these SIG nibs that just works for me. The line variation is nice, but not super-extreme, nor are the corners sharp and crisp. It’s got a nice moderate ink flow, I don’t deal with ink starvation, and I can get some variation without hard starting and skipping like I do with a lot of other flat nibs.

The Franklin-Christoph Model 45 XLV retails starting at $105. That price includes a steel #5 nib in the traditional sizes. In addition to the SIG grind, Franklin-Christoph also offers a wide variety of nib grinds by the master nib genius, Mike Masuyama, including stubs, italics, and even needlepoints. They also offer 14k gold nibs as well. If you want any of these special nibs, it will add to the cost. Prices are still extremely reasonable for work by folks as talented as Jim Rouse or Mike Masuyama, though.

And that’s one of my favorite things about small manufacturers like Franklin-Christoph. While their pens may be a bit more expensive than a pen from a mass manufacturer, they actually spend the time to make sure that each pen writes and writes well. They’ll adjust it to your desire. And they support their work. At pen shows, you buy your pen and pick your nib, and then come back while the folks at the table set your nib, fill your pen, let you try it all out, and make adjustments on the fly. You won’t get that same kind of care from most manufacturers, even if you’re paying many multiples more.

At $115 ($105 + $10 for the SIG nib), I consider this pen a real winner. It’s not cheap for a pocket pen, but it’s such a good pocket pen with such an amazing nib that I think it’s entirely worth it. I find myself reaching for this pen when I want something to stick in the watch pocket in my jeans to go grocery shopping to head off to a meeting. It’s fun to use, it’s comfortable, it’s light, it’s extremely well made, it holds a lot of ink, and it’s made from a really gorgeous material. This pen has a lot going for it.