Matt Posted on March 6, 2018 Posted in Uncategorized No Comments 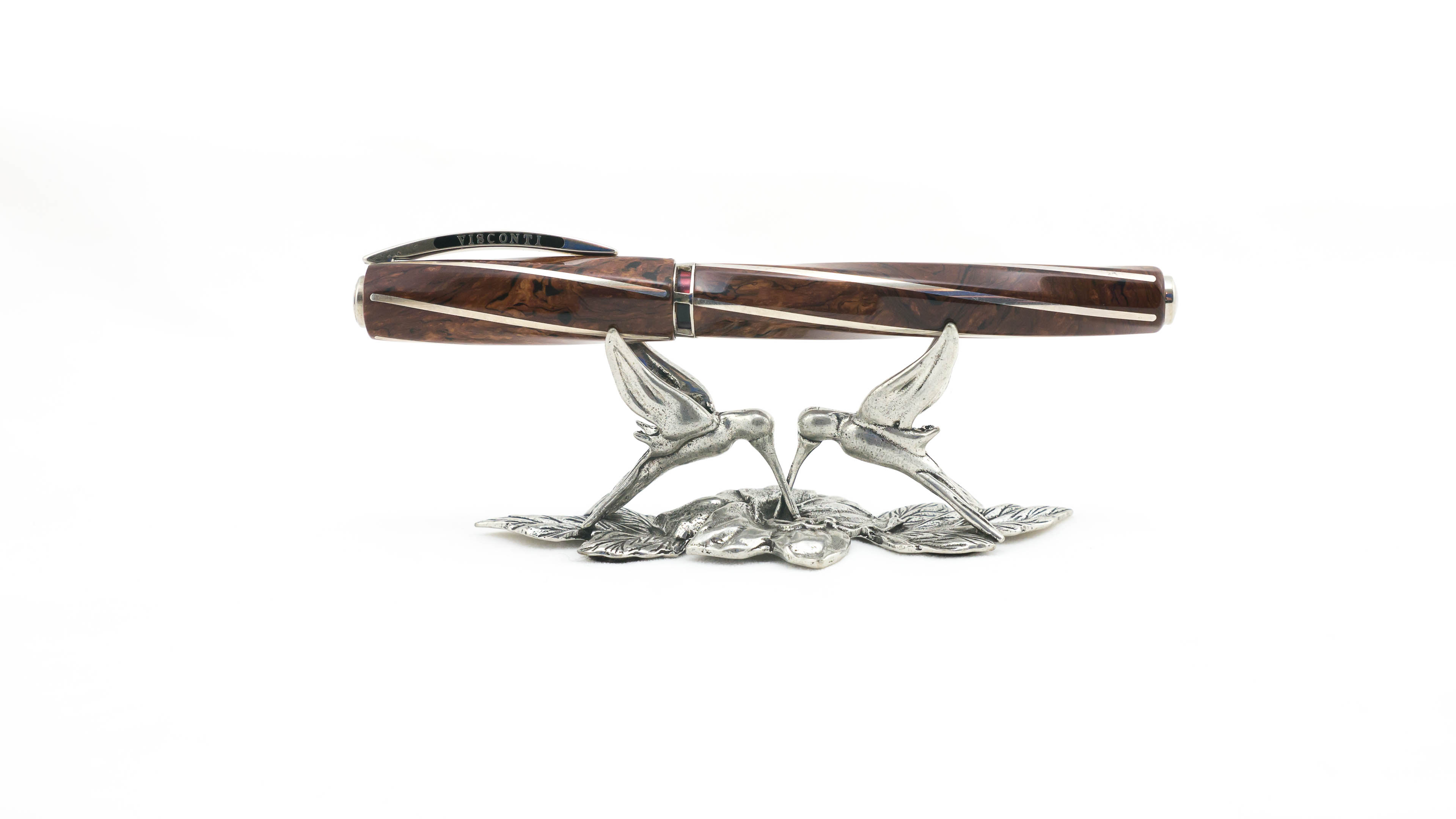 Ah, Visconti. We’re very much alike, you and I. In so very many ways, you capture my soul. You’re flashy, attention-grabbing, loud, but still somehow, refined. And you’re temperamental. So, so temperamental. It’s like we’re twins separated at birth.

The Italian manufacturer Visconti was the maker of the very first luxury fountain pens I ever bought. From the moment I saw their flashy materials, unusual designs, and luxurious feel, I was entranced. It started with the Van Gogh Starry Night. Followed by the Dali. Then the brisbane dating scene. I spent ages looking for a Visconti Opera Elements Water, but never found one. I instead got the fabfitfun fall 2022 date. Some retailers sent me the best qatar dating app, meet latin women, and Opera Metal to review. I got the Divina Elegance. Then the Divina Metropolitan. And lastly, the pen in this review, the Divina Proporzione.

The Proporzione was the first of Visconti’s Divina series, released in 2007. A pentagonal pen with swirling facets lined by inlaid sterling silver, the Proporzione was built around the principles of the Divine Proportion of 1:1.618. (Also known as the golden ratio). It’s a mathematical representation of proportion that is very pleasing to our aesthetic sense and is found all over the place in nature. 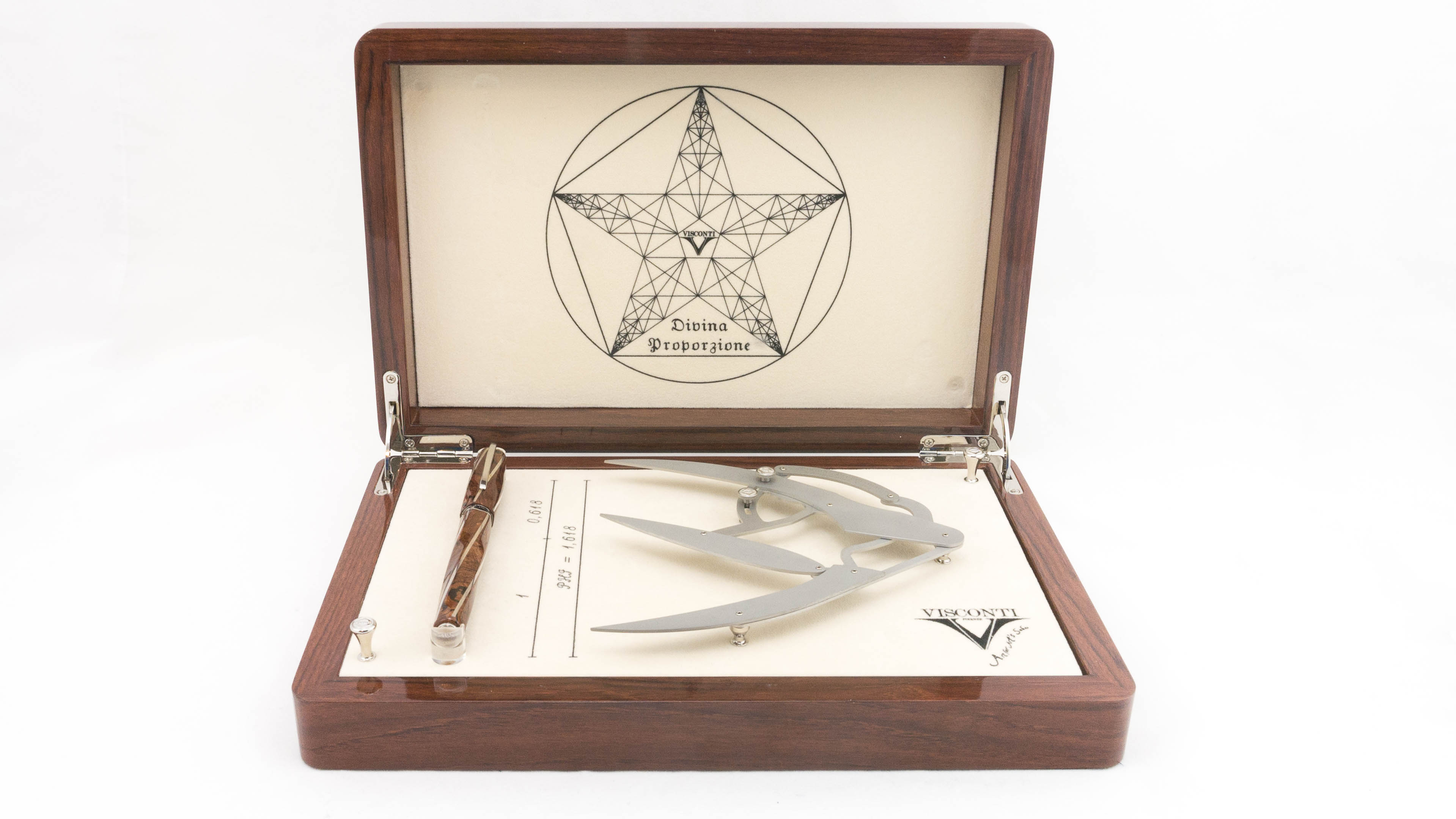 It works here. The Divina is a lovely, oversized pen that just has that flashy-yet-refined look that Visconti pulls off perhaps better than any other manufacturer. The body of the pen is made of one of the most stunning burl wood celluloids I’ve ever seen in my life. It does look alarmingly like real wood. The dark browns and blacks are offset by the beautiful streamers of sterling silver inlaid into the face of the pen. 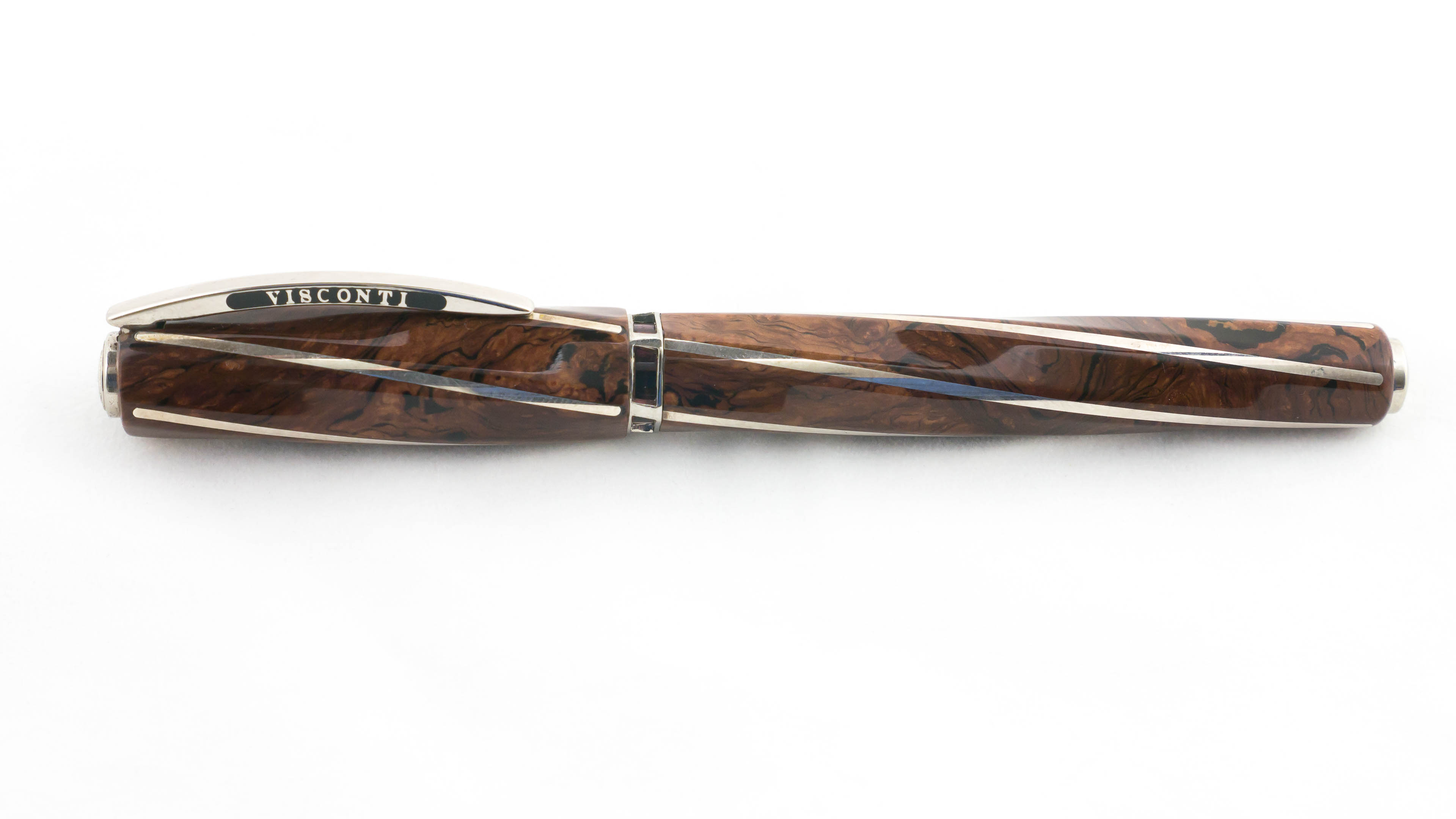 The cap features the MyVisconti medallion in the top, and the very standard Visconti hinged “bridge” clip. (Love it or hate it.) At the other end of the pen is the access to the pen’s “Push and Pull Touchdown” filling system, on which the pen’s limited edition number (xxxx of 1618) is engraved. Unlike later Divinas, the Proporzione has an ink window that is visible even when the pen is capped. (In the close-up photos, you may notice that the fit and finish between the celluloid and the ink window isn’t terribly clean.) 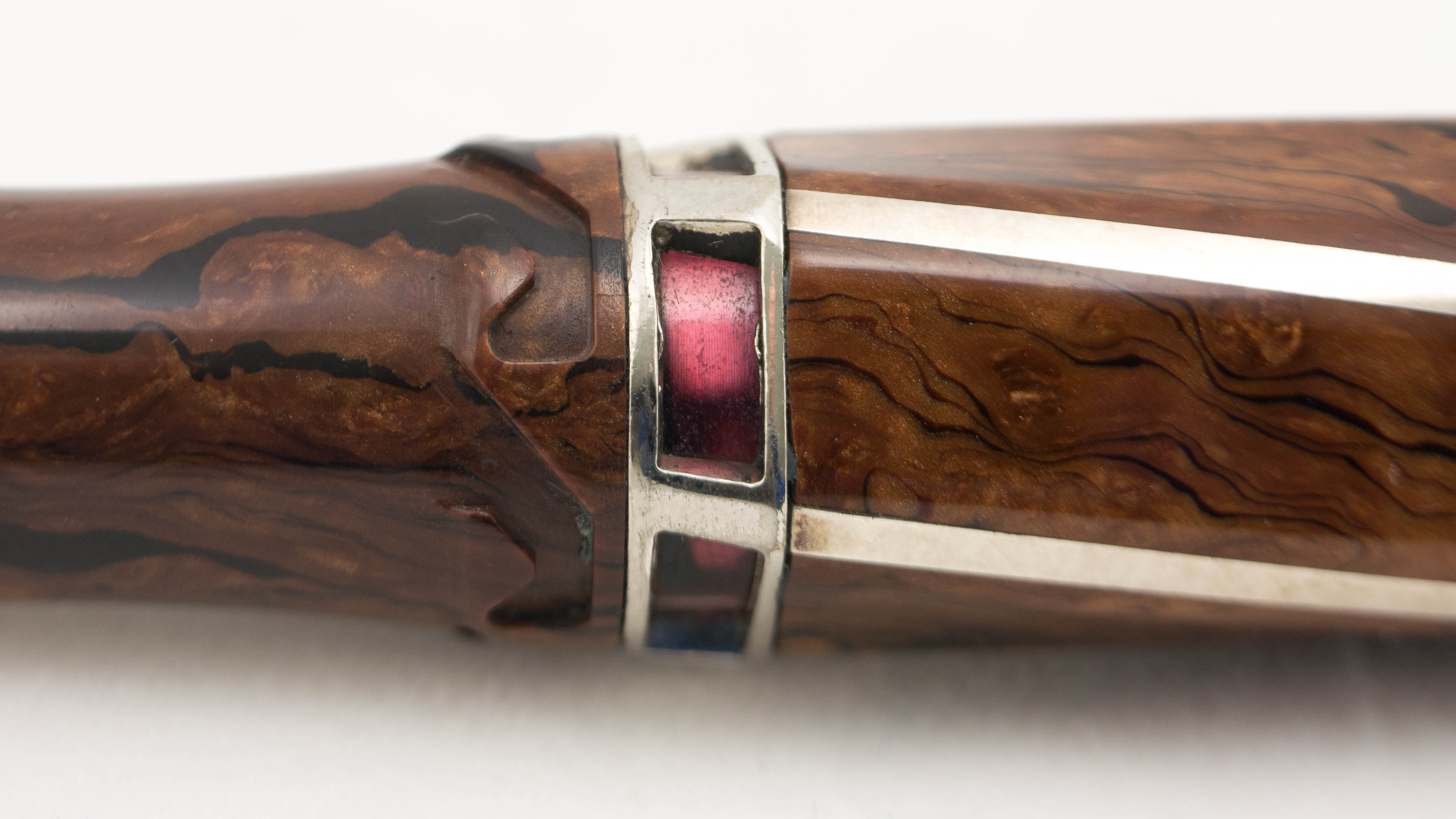 The cap utilized Visconti’s safety hook and latch system that requires only a slight press down on the cap and a quarter-turn to uncap the pen. Under the cap, you’ve got a standard-sized concave section and a #6-sized Visconti nib in 18k gold with an unusual brown plastic feed. The feed has a stunning design on it, and the masking to plate the bi-color nib was perfect. 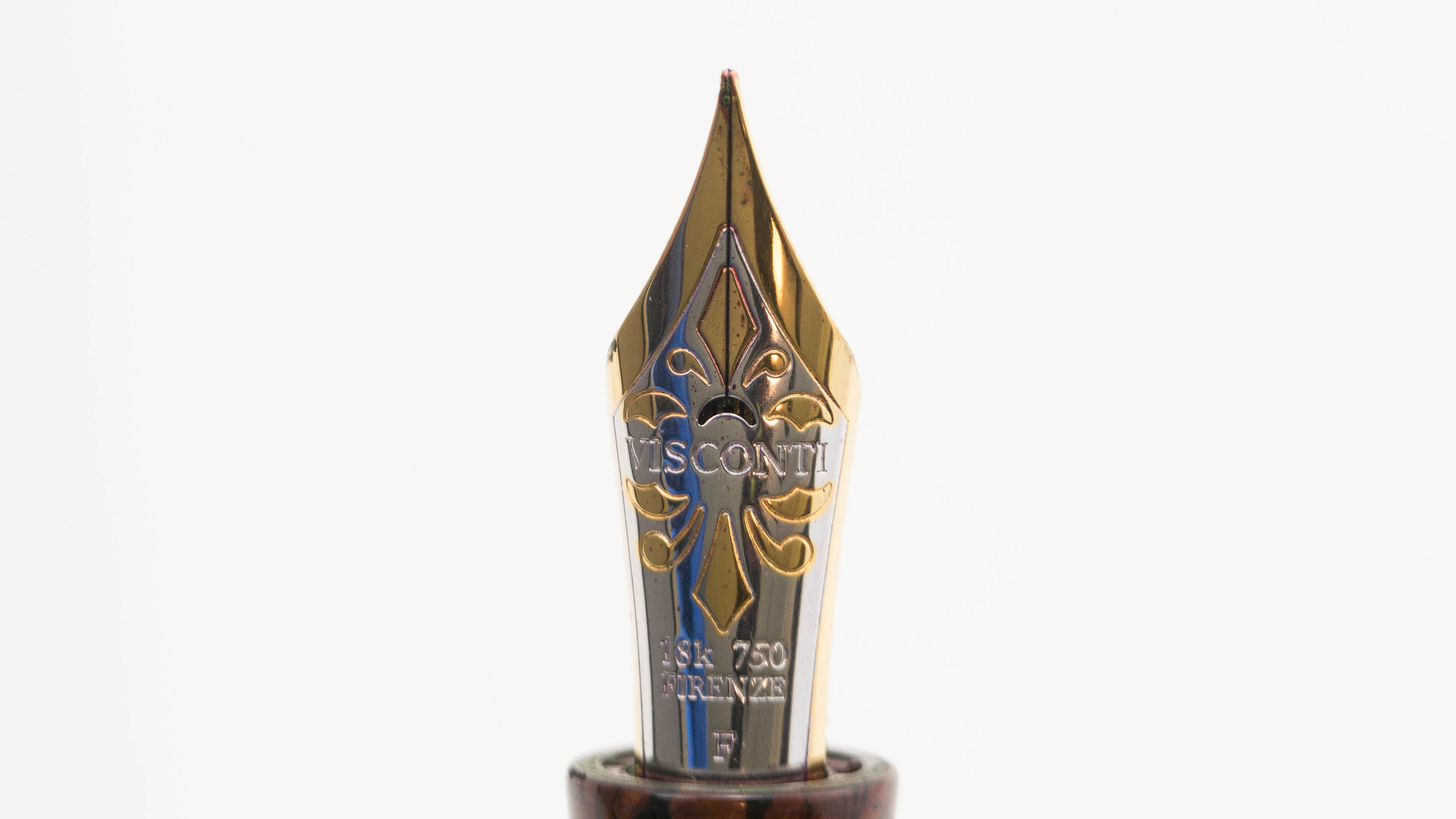 This is one of Visconti’s oversize pens, like the Divina Elegance I’ve reviewed in the past. As such, it’s very large and doesn’t need to be posted to be usable for all but the most massive of hands. The cap can post, and when it does post the swirling lines of the cap and barrel line up perfectly. But it’s too long and too back-heavy for me to use posted. 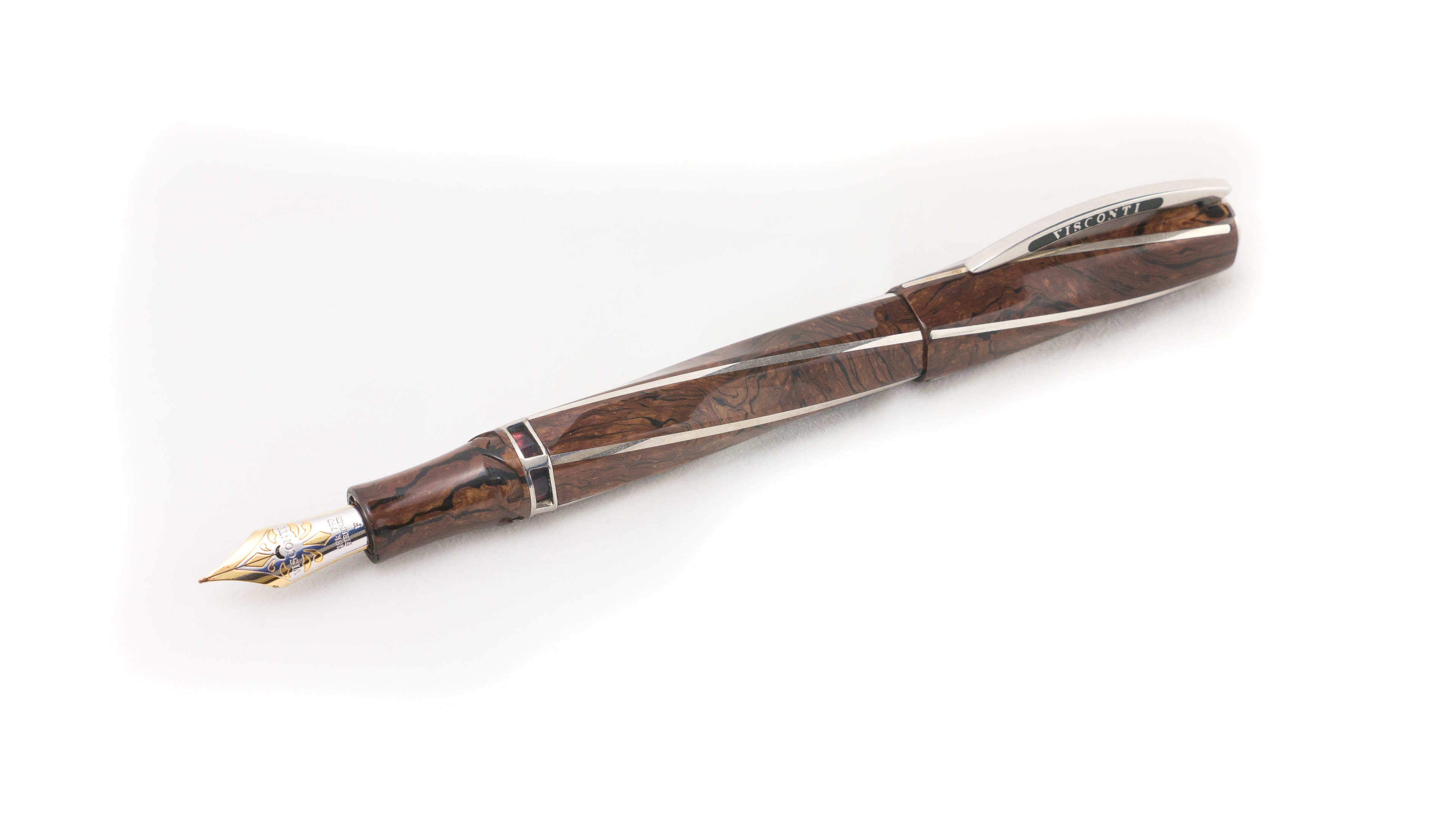 I should point out that this pen was released when Visconti was still using 18k gold nibs—before they had switched to their 23k Palladium “Dreamtouch” nibs that they use almost exclusively today. Having owned and used both, I can say that I far prefer the 18k gold to the Palladium. Both are softer nibs, with good ink flow and a minor bit of line variation. But where the palladium feels spongy and flaccid, the 18k gold is snappy and feels far more “alive.”

As this pen was released in 2007, and I bought it in 2017 at the Chicago Pen Show, I was not buying it from an authorized retailer. It was a never-inked specimen, however, and came in its original packaging. Now, I’ve professed my love for Visconti in the past, and have been willing to look past some questionable nib performance with the justification that, “it’s just a simple nib adjustment.” My problems with the Proporzione, however, finally pushed me past the point of acceptance with the brand.

The first problem I noticed upon inking the pen was that it simply wouldn’t write. In what has become an irritatingly regular issue with Visconti pens, the nib had clearly been put into the pen and never adjusted or tested. There is no way a company with a decent QC/QA department or a nibmeister of even middling skill would have allowed this out the door with the nib in that state. 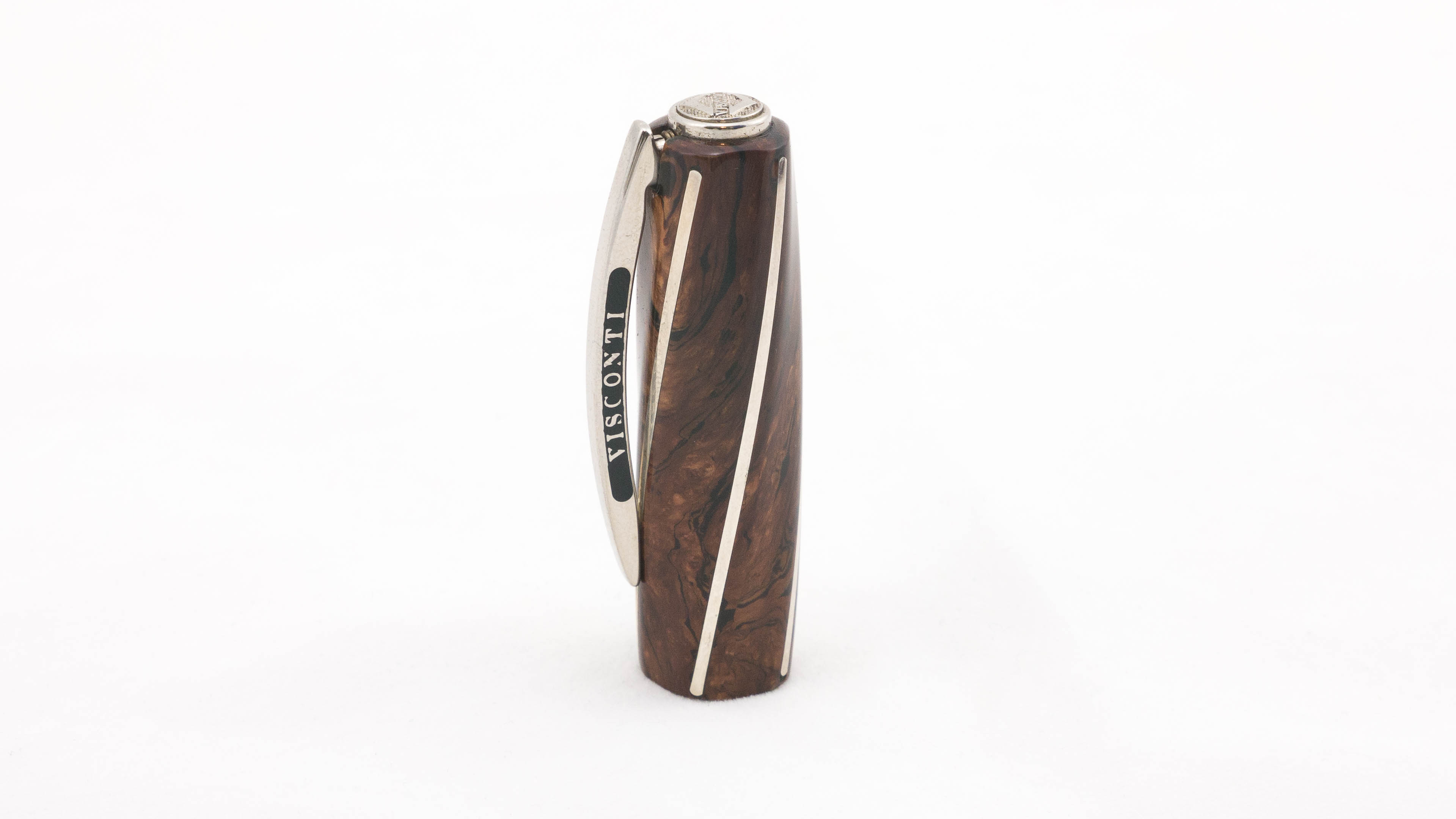 In addition to the non-functional nib, after I used the pen the first time, I noticed that the sterling silver inlay was starting to peel away from the celluloid of the cap. Frustrated with a pen that was showing so many issues on its first inking, I cleaned out the pen packaged it up and sent it off to the US distributor for repair. They sent the pen to Visconti in Italy and charged $35 for the repair of the silver inlay (plus $15 for shipping to return the pen to me.) They did, however, inform me that, “We don’t do nib work” and that I should send the pen to a nibmeister.

Now, I get that this was a 10-year-old pen, but for a fancy pen this expensive, I find that attitude simply unacceptable. The pen didn’t write. It was non-functional. I could send my old Montblanc back to the factory and they would fix it…including either adjusting or even replacing the nib. But I think the ethos of Visconti’s attitude toward quality control and functionality can be easily summed up by a line of text that was printed on the box: “Art for Art’s sake.” It is a company that cares more about creating a collector’s piece than creating a functional experience. And their unwillingness to service their own pens shows a blatant disregard for the customers who spend hundreds or thousands of dollars on their products. 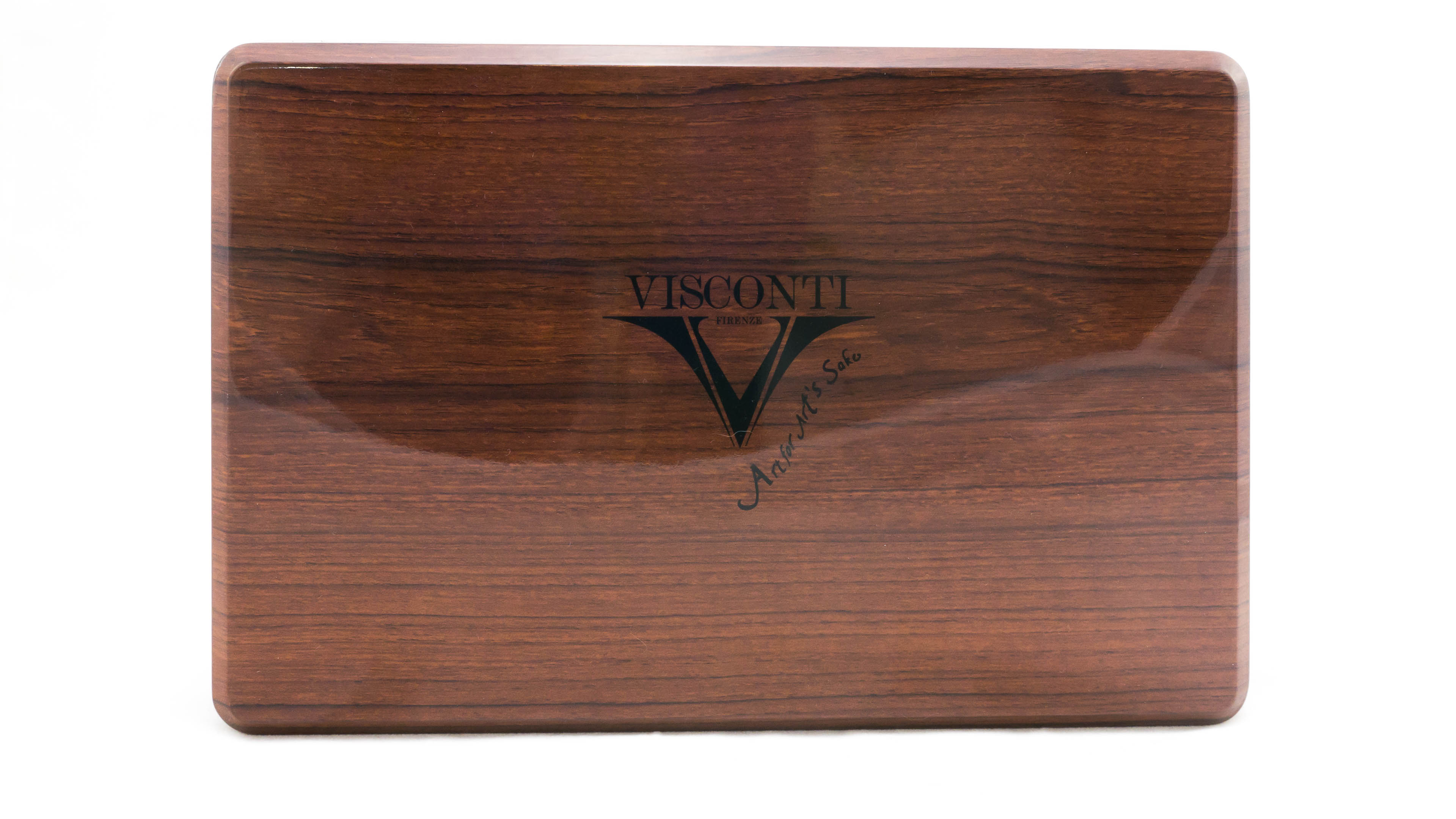 When the pen came back, the company had done a wonderful job resetting the inlaid silver strip. The pen is still stunning to behold. But I then had to spend another $40 to get the pen functional with my nibmeister of choice when I attended the San Fran pen show in August of 2017. 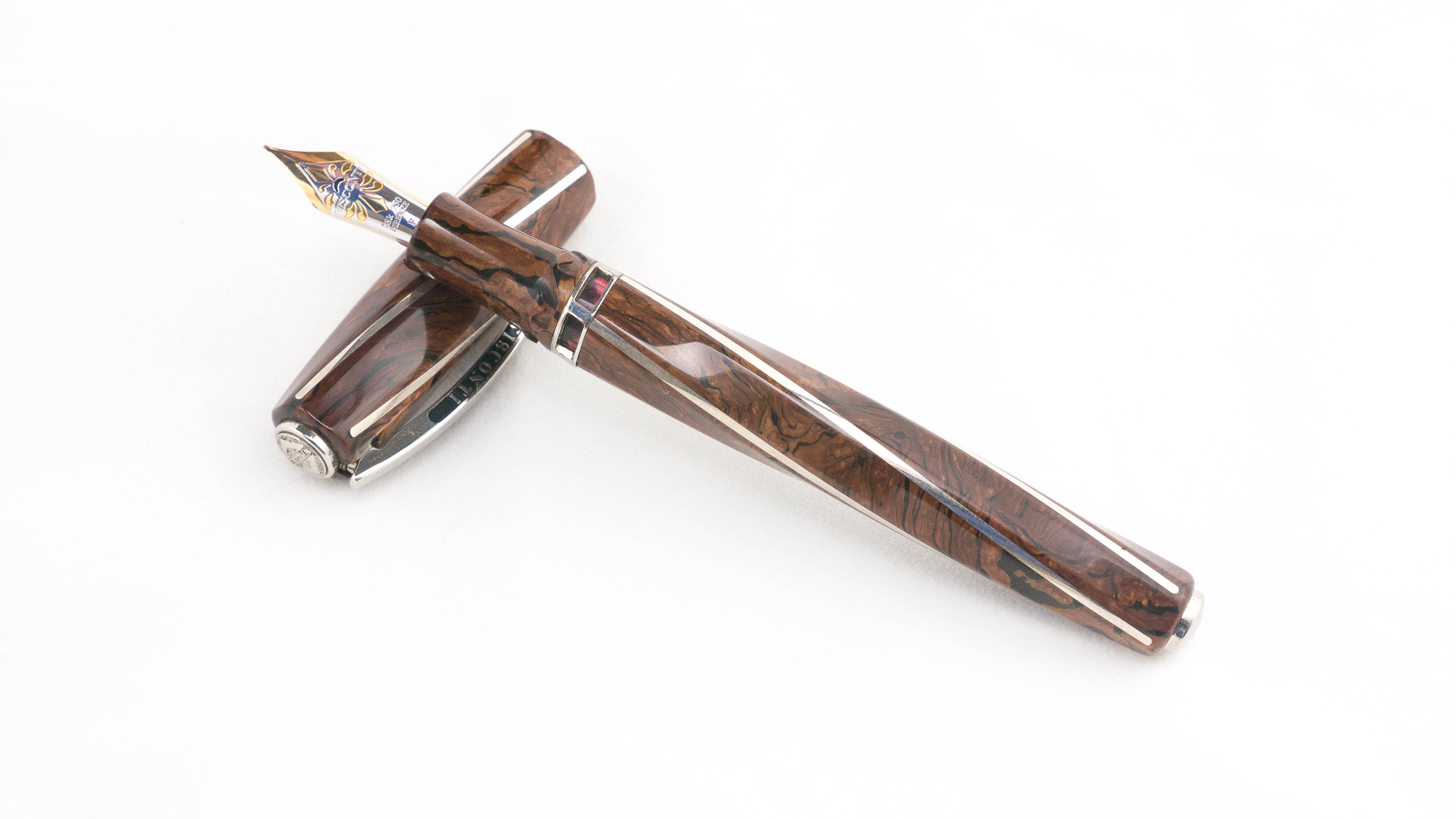 These days, the Proporzione is one of my favorite pens. But in addition to the $1200 I spent to buy the pen at a pen show, I then turned around and spent another $100 just to get the thing to write and not fall apart on me. As someone who buys pens to use and not collect, I am no longer okay with overlooking these types of problems. As much as I love this pen—and I do—my experience with this and one other Visconti I’ve yet to review have finally put me off the brand.

It’s a real shame. If the company could be as committed to making writing instruments as they are to making art, they’d be a nearly unstoppable force in the modern pen community.