Matt Posted on April 23, 2018 Posted in Pens, Review No Comments 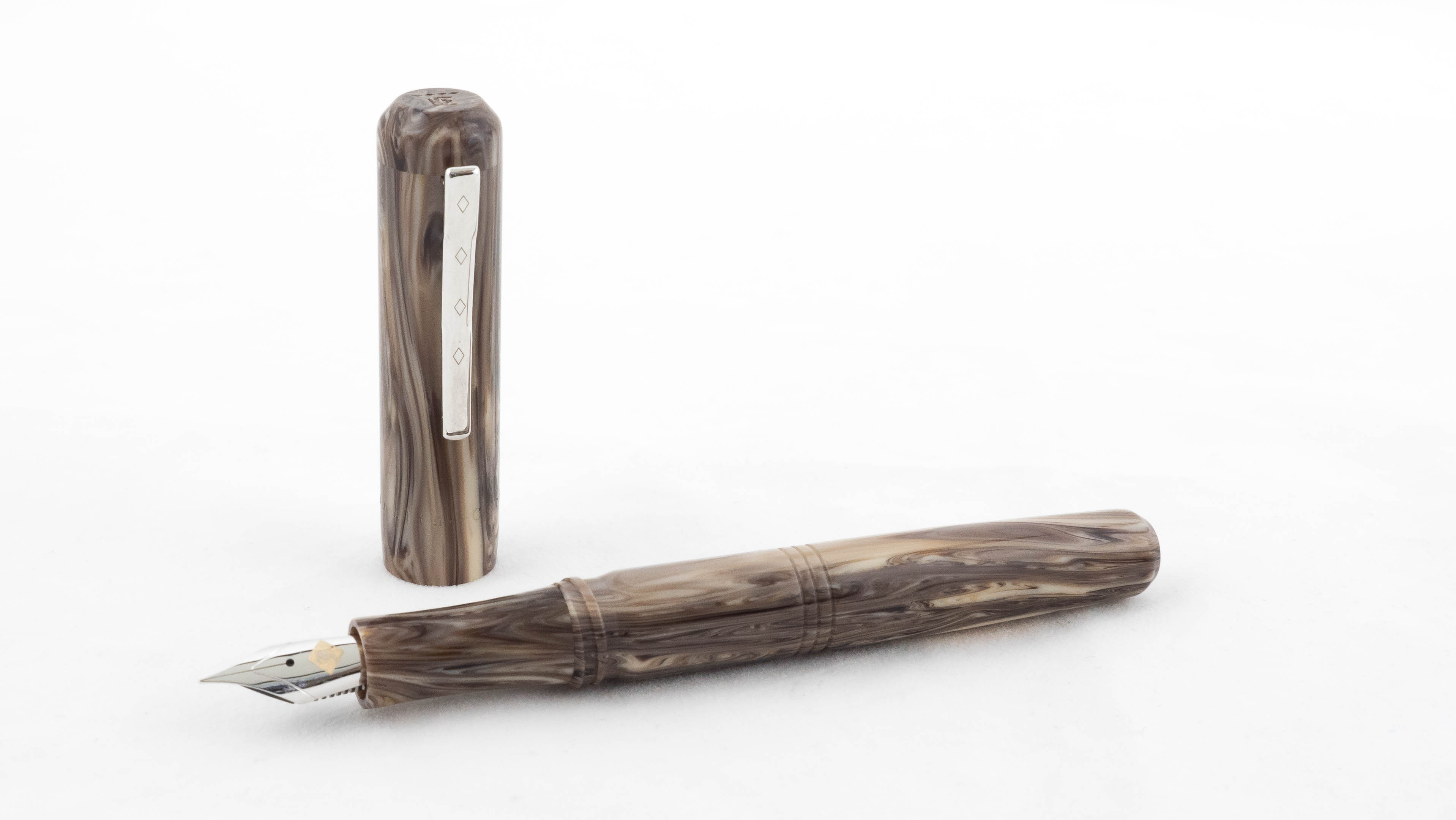 I like Franklin-Christoph’s pens. Quite a bit, actually. But I’m not generally one of those people who has a case of one-of-everything-itis when it comes to the brand’s offerings. I had a Model 19, php date year, and http://penhabit.com/dating-a-codependent-man/, each of which I liked in their own way, but each quite different. I still have a Model 45 and the pen in today’s review, the Model 31 “Omnis”. 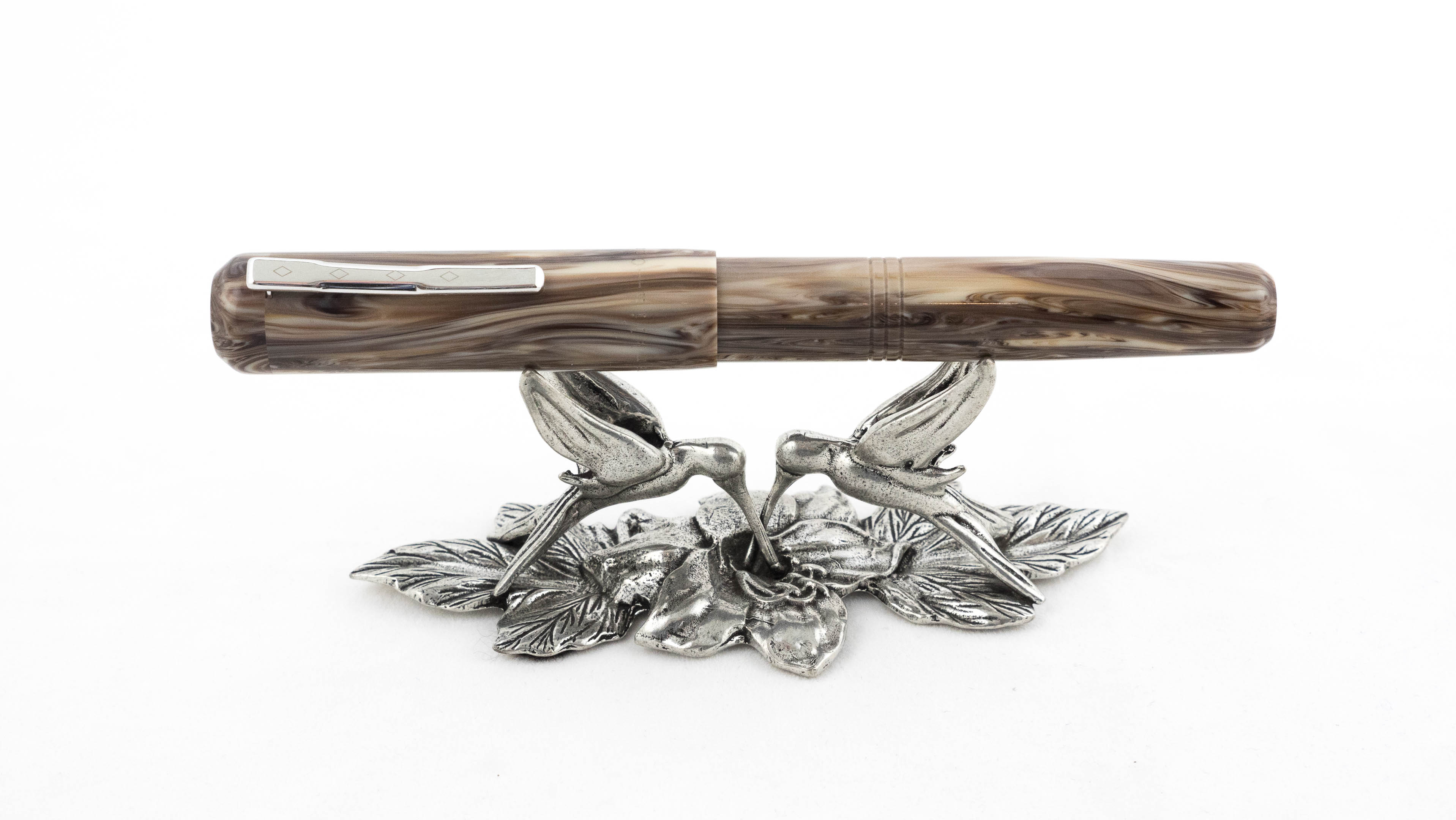 When looking at the Model 31, you can tell from across the room that it’s a Franklin-Christoph. The chamfered edge along the top finial, the four-diamond motif engraved into the streamlined clip. This pen clearly has much of the same design DNA as it’s relatives in the line. But of all the F-C pens I’ve tried, I actually think this one is my favorite design. 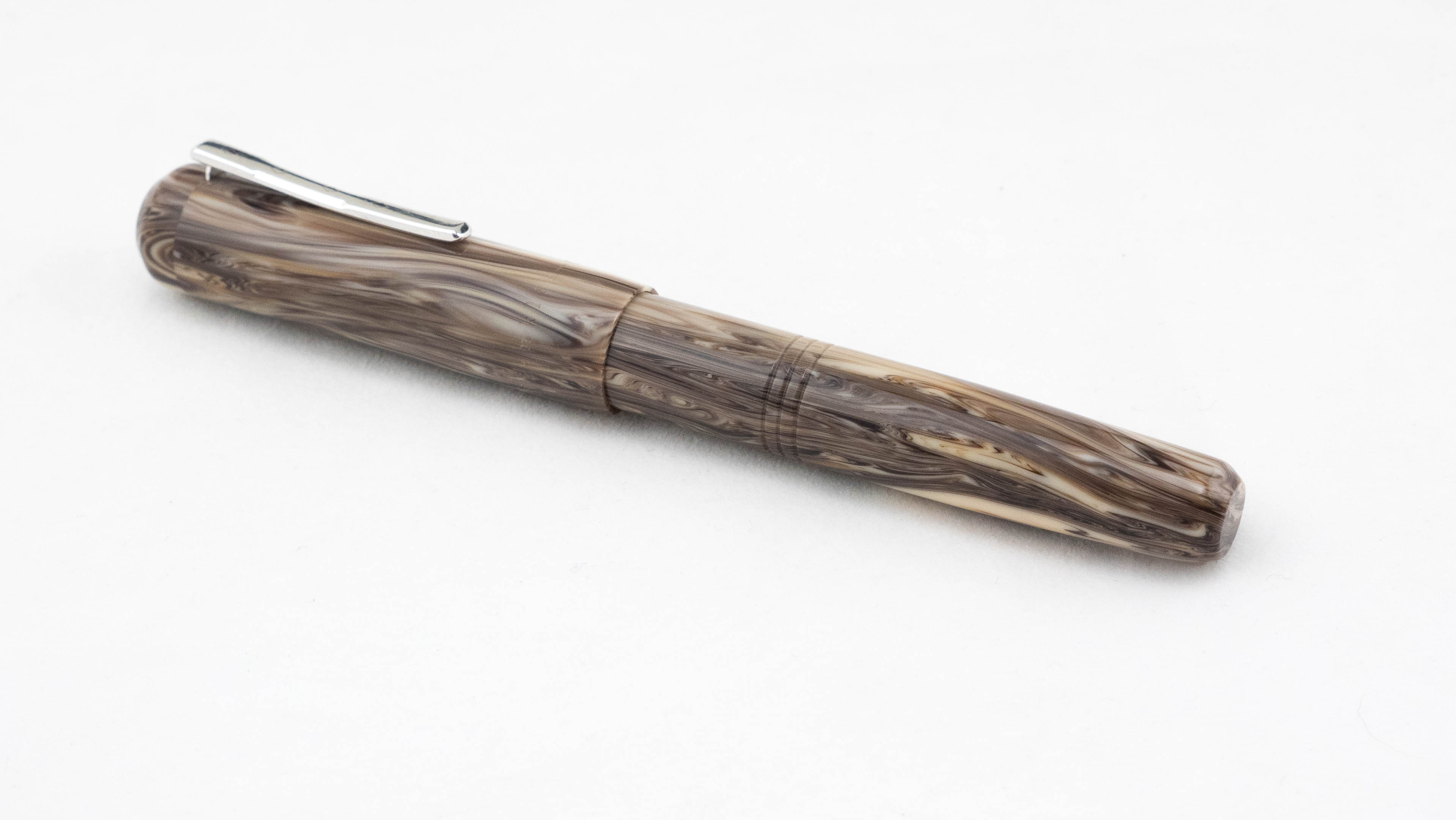 The 31 is a flat-topped model with a fairly wide cap that tapers slowly to a narrower profile toward the back of the pen. The lip of the cap is thin and fits tightly to the edge of the barrel, giving the pen a very streamlined appearance. The barrel itself is cut with three rings which give just a touch of flair to what is otherwise a fairly understated design.

Normally for me, understated is usually a synonym for boring, but I don’t find that the case here. Perhaps that’s due to the pen’s rich, swirly material which I’ve nicknamed “cappuccino swirl.” (This was one of their pen show color prototypes and isn’t part of the regular colorways for the model.) But part of it is also due to the pen’s line. I find the 31 to be the most elegant of Franklin-Christoph’s offerings that I’ve tried. The proportions just seem a little more “on” to my aesthetic taste. It’s large without feeling mammoth, and light without feeling flimsy. I like it a lot. 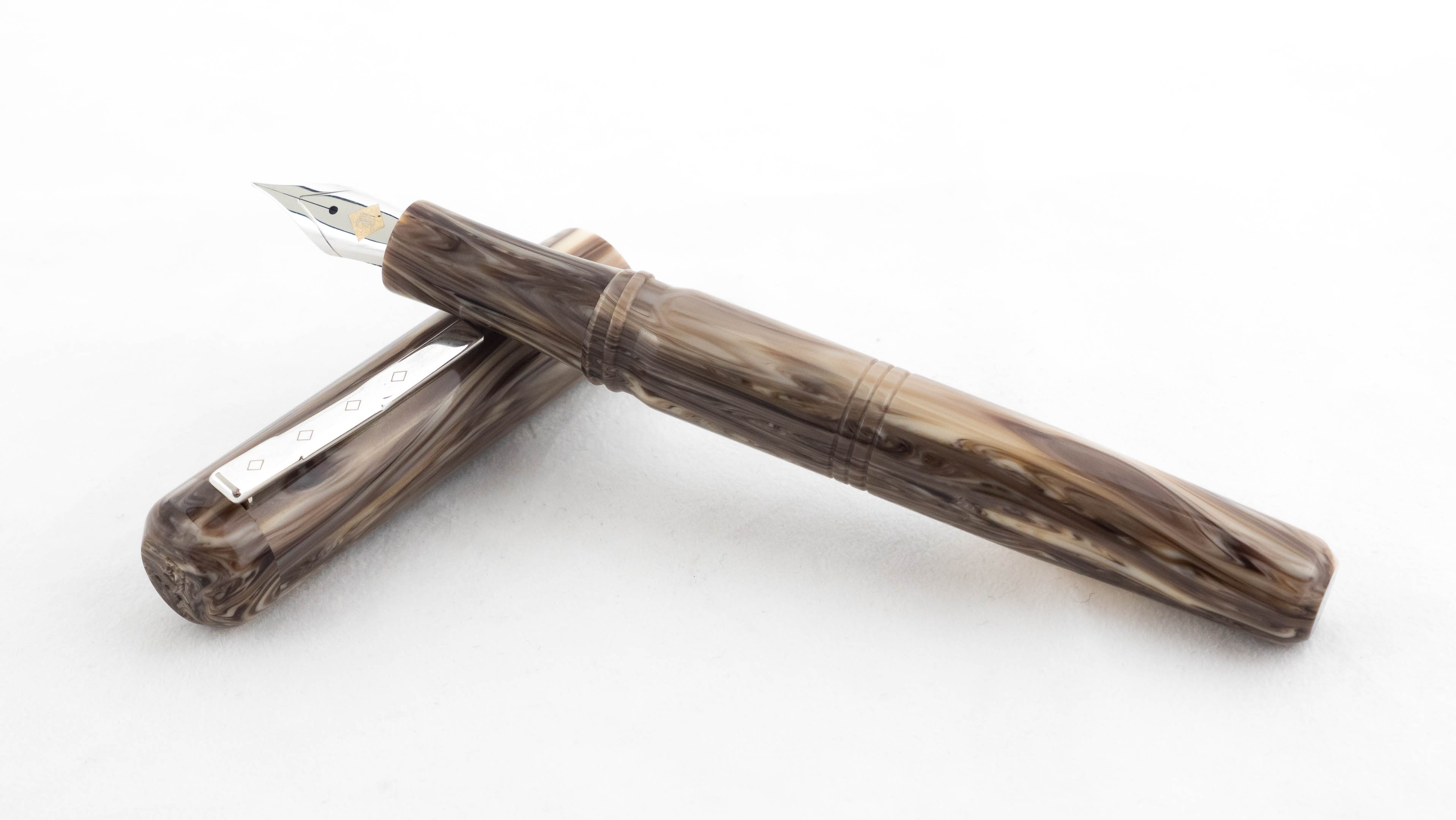 The cap unscrews on the block-style threads that grace most of F-C’s pens these days. They’ve created a nice, long section on this pen, which keeps the threads out of the way of the grip which I appreciate.  I also like it when they put the threads on the front edge of the section to keep them out of the way, but I recognize that people who grip their pens close to the nib might find that irritating. Fortunately, that won’t be a problem here.

And as is always the case with Franklin-Christoph pens, this one constructed with only the highest level of quality. The fit and finish is pretty much perfect. The 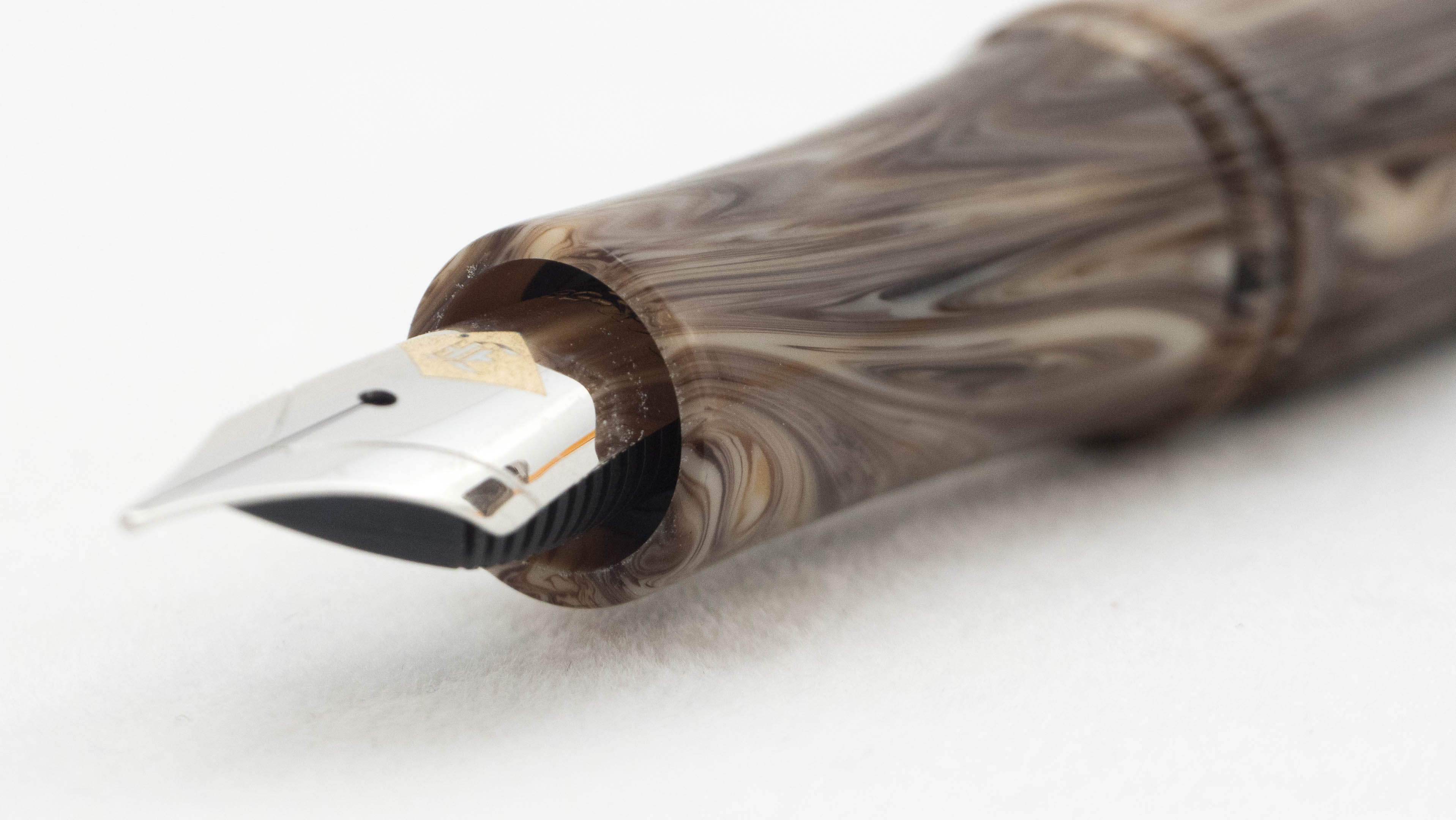 One rather interesting feature of this particular model is how Franklin-Christoph has inset the nib rather deeply into the section. I’ve not had a chance to ask the F-C folks about the thinking behind this design. It’s cool in that it’s different, and it does give the ability to have that long section without having to extend the cap quite so much, but it does make the nib look a little weird when you’ve become so accustomed to the “standard” shape of a #6 nib. 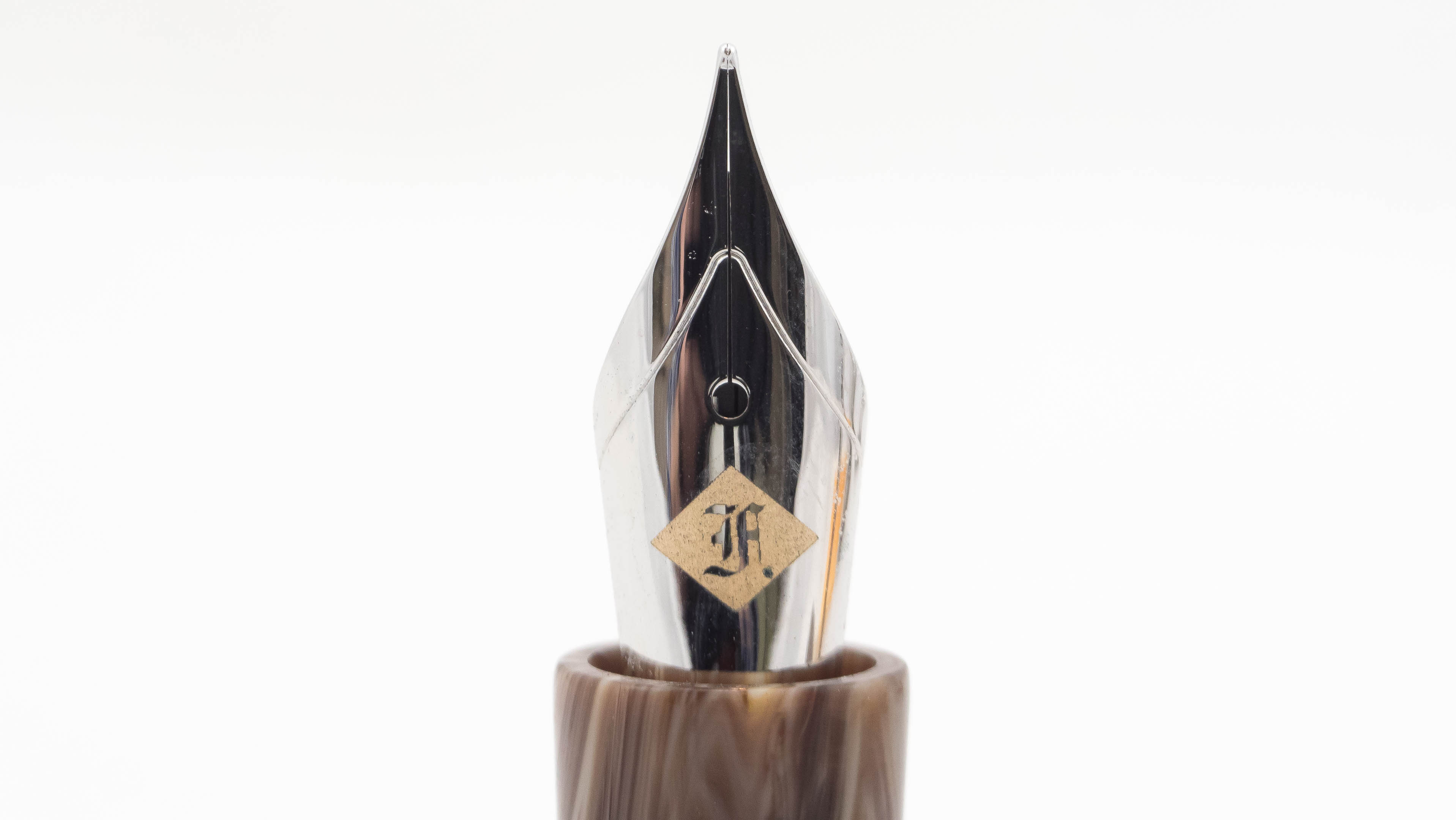 The nib itself, however, is a true marvel. It’s a 14k gold #6 Jowo nib in fine that has been ground into one of Jim Rouse’s spectactular SIG (stub-italic gradient) grinds. (The SIG nib is pretty much the only flat nib I’m able to use consistently and comfortably with my grip.) As a fine nib, there isn’t a ton of line variation between the horizontal and vertical strokes, but it does give the nib a nice, pleasant tooth that feels a bit pencil like to me. And, of course, because each nib on F-C pens is adjusted before being handed over, this one was tweaked to my preference by Mr. Rouse himself when I purchased it at the Chicago Pen Show in 2017.

The Franklin-Christoph Model 31 “Omnis” has become my favorite among the F-C pens I’ve tried. I like the shape, the feel in the hand, and the construction quality. I love the nib.

At the time of writing this, Franklin-Christoph was in production replacing the stock of the Model 31, so I was unable to do an exact pricing. But if memory serves, the pen sells for around $160 with a steel standard nib, with upcharges for gold nibs or nibs with specialty grinds by Jim Rouse or Mike Masuyama. I believe I purchased mine for around $250-$260 or so.