Matt Posted on May 2, 2018 Posted in Uncategorized No Comments 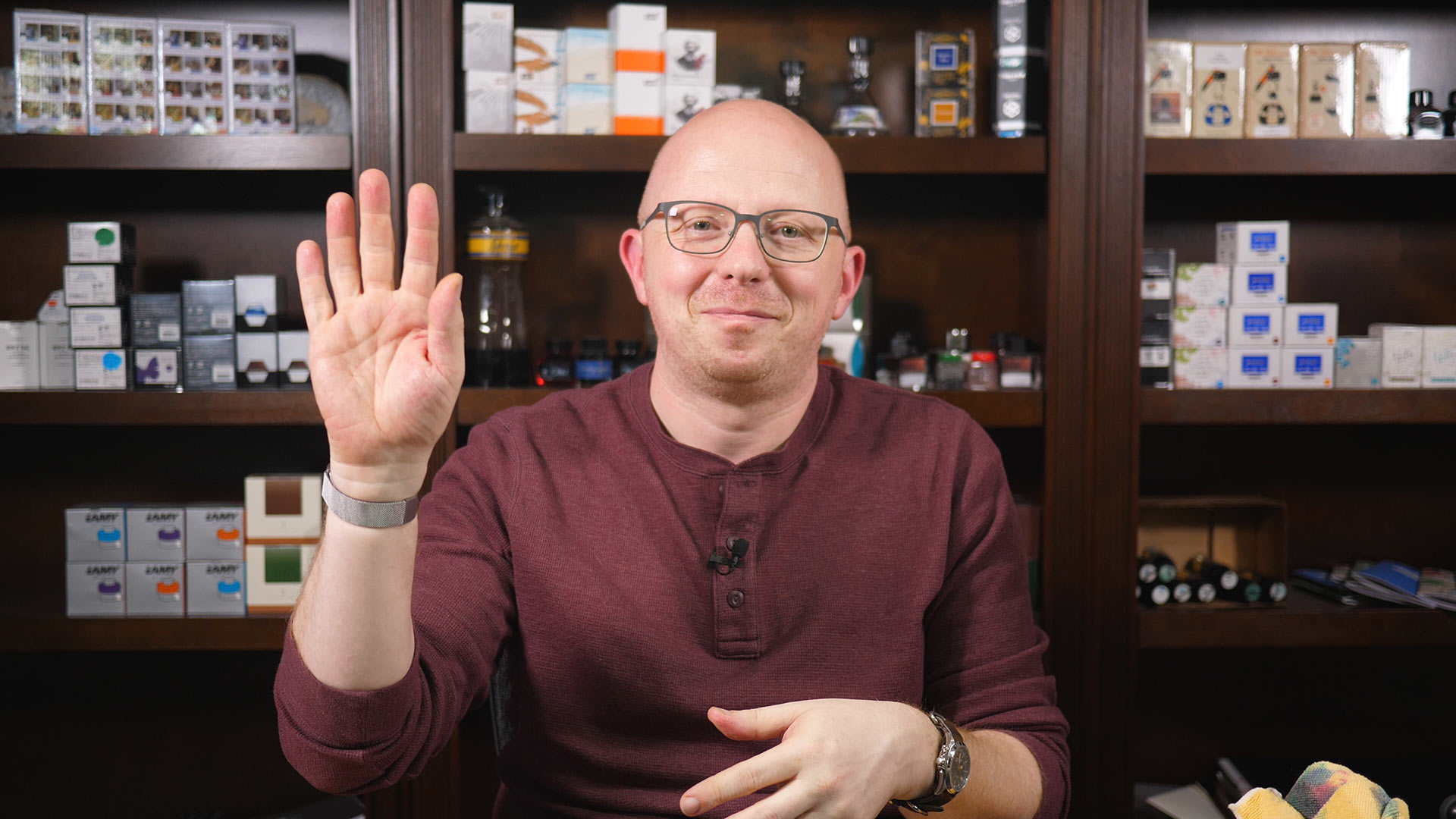 It was a drizzly Sunday afternoon in late February when I found myself crammed into the busy thoroughfare of the famous Pike Place Market in downtown Seattle. I was on a mission. Nestled between the flower stalls and airborne fish stands was the small table of The Market Penmaker. I was there to pick up a birthday present for my father: a hand-turned, wooden fountain pen. I walked away with more than just my father’s present though; I walked away with a new obsession, hobby, and eventually, avocation.

In the years that passed, I jumped into the fountain pen hobby with abandon. I read all the posts. I watched all the videos. I bought all the pens. I bought all the inks. I started reviewing pens, wanting to do it through the eyes of someone just getting started in the hobby. One day I turned around and realized I had nearly 40,000 YouTube subscribers and 6 million (!) video views. I had produced over 300 videos. I had purchased, and now owned, hundreds of bottles of ink and dozens upon dozens of very expensive pens. I had flown all across the country to attend pen shows. I had taken thousands of pictures and written hundreds of thousands of words. I had filmed over 10 terabytes of high-definition video and spent more hours than I care to calculate putting them all together.

Running The Pen Habit has been a wild ride…one that I never imagined when I sat in front of my computer screen five years ago and used the built-in webcam to make my first video. During the intervening years, I moved from an apartment into my first home. I turned two of my four bedrooms into a “studio.” I built a “set” and attached studio lighting to my ceiling. I expanded to three cameras and multiple microphones. I started my own line of notebooks. I wrote theme music and learned video editing techniques. And through all that effort I think I’ve made my mark, hopefully for the better, on the online fountain pen community.

But if there’s one lesson that life has taught me, it’s that life itself marches on: people grow, situations change. So it is with The Pen Habit.

My original forays into fountain pen reviews began with a deeply-ingrained case of ME TOO-itis. I watched my early (and involuntary) mentors, Brian Goulet and Stephen Brown, sharing their knowledge–and I wanted to do it too. So I did. And it was fun. And it was a lot of work. And it was emotionally draining. But still really fun.

In the last couple of years, though, I have changed as a person. Call it a midlife crisis or a shifting of priorities, perhaps. I realized that the time and effort I was pouring into The Pen Habit was no longer leaving me happy or fulfilled. I found myself uninterested in the new inks or pens or notebooks or Kickstarters or news or drama that circulates around the fountain pen community every couple of weeks. People began asking me questions about new products, and I realized I had no idea what they were talking about. I stopped spending time on the forums or Slack channels or Facebook groups or even answering my emails. Talking myself into spending a Saturday making or editing videos was becoming an increasingly difficult chore. Even after several months of hiatus last summer, when I returned to The Pen Habit in the fall, my heart wasn’t in it. I realized that the time had come for me to move on to other things.

So, the majority of this season was spent trying to answer viewer questions, make it through the backlog of items people had sent me for review, and putting my affairs in order (as it were.)  I pulled all the advertisers off penhabit.com in January. I stopped charging my Patreon supporters for videos a few months ago. I stopped accepting new pens for review since before Christmas. I was preparing to take the next step: to stop making pen videos and blog posts.

Even though I will no longer be new content for The Pen Habit, I plan to leave both penhabit.com and the Pen Habit YouTube channel up for the time being. Comments, however, will eventually be turned off. (The effort required to moderate a comments section is more than I’m willing to put into legacy content.) The Inky Fingers notebooks will stay listed on sexy muscle men naked until the stock is gone. Once they sell out, that will be the end of the line. Likewise, I’ll be listing pens I wish to sell on the Pen Habit website until I’m left with only my core collection of favorites.

And as for me? As we say in my family, “If you want to make God laugh, tell him your plans.” So, I don’t know what’s next for sure. I want to focus on several things: I want to build more real-life friendships with a wide array of people. I want to travel the world and expand my horizons in a way I haven’t done for decades. I want to date and form a romantic relationship. (I’d be happy to skip the dating thing and go straight to the relationship, but that’s not usually how it works.) I want to catch up on work around the house. I want to have time to use the pens I’ve talked about in my padded room for these last five years. I want to spend time with my fuzzy yellow monster for the short couple of years we have left to us. (He turns 12 this summer.) Mostly, though, I want to leave room in my life for randomness to guide me to new experiences.

I know that this isn’t the first time I’ve announced I was planning to “leave” The Pen Habit. I hadn’t even made it a year until I nearly threw in the towel the first time. With this announcement, I don’t feel as though I’m being driven out of a hobby I love like before. Instead, I feel as though I’ve contributed all I have to contribute. My interests have shifted. I still love using my beautiful writing instruments, but I have a wandering heart when it comes to hobbies. I feel like it’s time for me to make way for the next group of reviewers and YouTubers. I’ve done what I can do. Now it’s time for someone else to take it the next step.

I would be deeply remiss if I didn’t spend a little bit of time before I sign off to thank the many, many, many wonderful people who watched my videos, emailed me, left kind comments, and showed both emotional and financial support to me over the last five years. Thank you to the people who bought my notebooks, or who came up to me and said hello at a pen show. Thanks to the folks who sat around the tables late into the night as we passed around our pens, shared stories, or laughed nearly to the point of puking.

Thanks, especially, to Brian Goulet and Stephen Brown, whose videos encouraged me to get started doing these reviews in the first place, and whose continued support has been the reason I was able to keep doing them for as long as I was. Thanks to my special Pen Show Posse of Ana, Brad, Fr. Kyle, and Lisa and Mike V for more laughs and amazing memories than I could possibly catalog, and for some truly aggravating group texts! Thanks to my online and pen show friends that are far, far too numerous to list. (And I’d feel bad when I realized I’d missed people.)

I’d like to close with this thought: Four years ago, when I threatened to do what I’m doing now (albeit for a very different reason) I said I was going to make it my mission to civilize the internet. Realistically, that was never going to be feasible from my solitary computer in western Washington. The Internet can still be a cesspool that breeds self-loathing, mean-spirited, hateful people. But it’s also a place populated with the best humanity has to offer. So, please, as you go out into our virtual world, be kind. Be gentle. Be loving. Make the Internet a better place by having used it.

And, of course, keep writing!

With best wishes and much love,
Matt