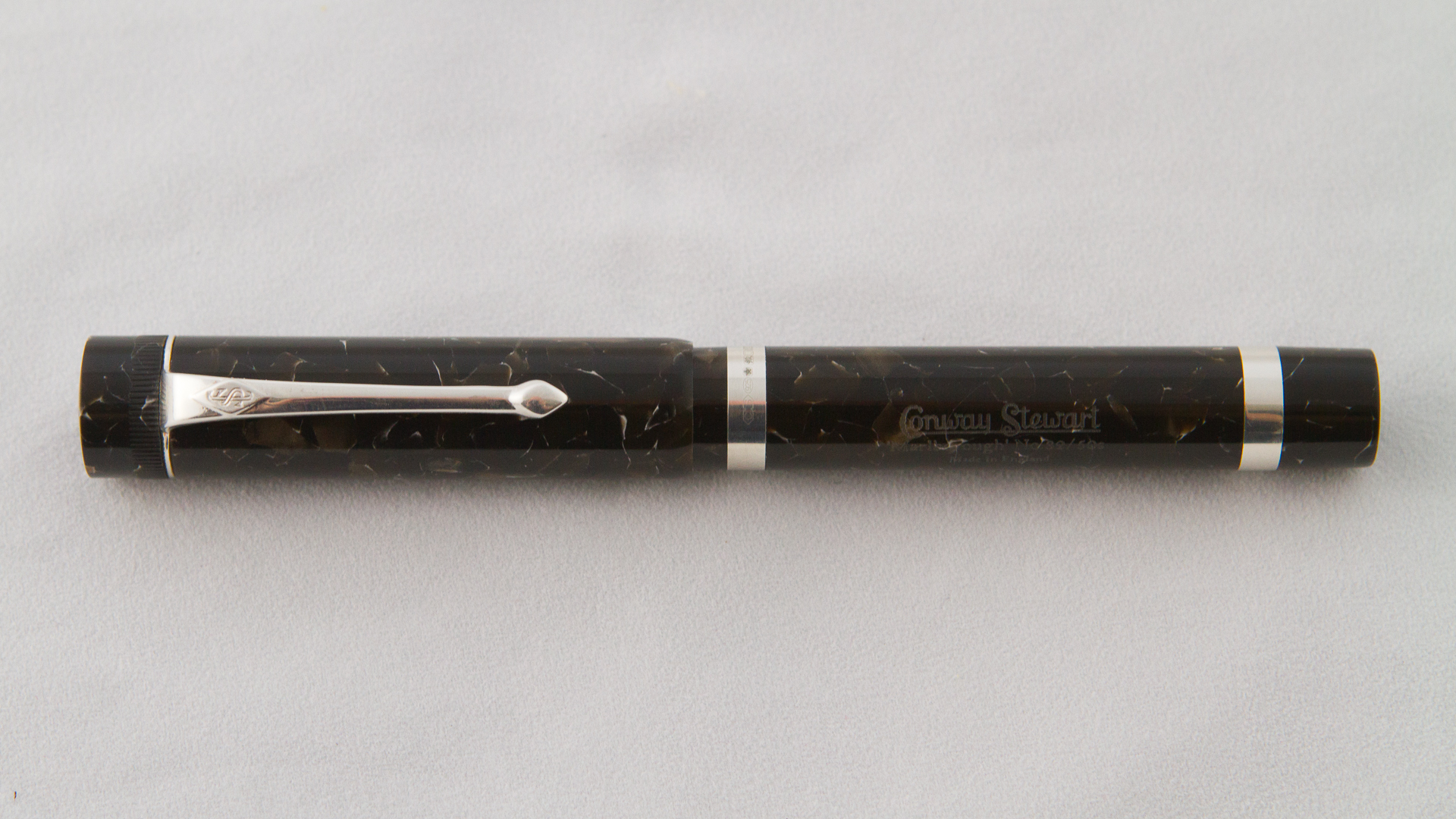 The Conway Stewart Marlborough is named after the Dukes of Marlborough, the family into which was born one Winston Churchill.  And, like the pens namesake, the CS Marlborough has an air of refinement and class about it that I just love. There is something about these British pens and their refined looks that just speaks to me like very few other pens do.

I visited my local pen store in January to pick up a bottle of ink (which later turned out to have spoiled, and had to be thrown away.)  On my way out the door, I spied the traditional Conway Stewart clip on a pen in the limited edition Dartmoor Acrylic–the same acrylic that my much-beloved Wellington is made from.  I really couldn’t afford to buy it, but as it was a pre-owned pen, and available at a small discount, and as my CS Wellington is my #1 favorite pen in my collection, I decided to bite the bullet and buy in anyway.  (Self-control has never been one of my strong suits.)

The Dartmoor finish, of course, is still a stunner. It’s deep black and brown, with veins of an almost iridescent white. It looks like sedimentary rock, and the depth of color is breathtaking. It is my favorite material out of all the pens I own, and I was thrilled to find another example of it…especially since it’s only ever released as limited editions.

The Marlborough is a purely cylindrical pen, except for the section (and unlike the Wellington, which has some subtle curves to both the barrel and the cap.)  This gives the Marlborough a bit more contemporary appearance, which is aided by the inclusion of two silver bands in the barrel.  The standard CS engraving is on the side of the pen, and the bottom of the barrel is completely flat, even allowing the pen to stand upright on its own.

The fit in the hand is quite pleasant, although, depending on your grip, the threads could be a bit of an annoyance.  Like all the other CS pens in my collection, the cut of the threads is perfect, and the mechanism quite smooth.  The pen is a cartridge/converter pen, and utilizes standard international converters.  It can also utilize threaded converters, which I tend to prefer to just the standard friction-fit coverters.

The pen is not really made to be posted. While you can technically post the pen, it doesn’t post very deep, resulting in a pen that is ridiculously long.  That extra length tends to make the pen feel unbalanced and unwieldy. The pen is also a little bit lighter than I expected after my experience with the Wellington. The acrylic doesn’t feel as thick, nor does the pen feel as substantial. I prefer a slightly heavier pen, and so, of the two I would still pick the Wellington.

What makes this pen such a delight to use, however, is the nib. The 18k nib is surprisingly springy, and can provide a rather substantial amount of line variation. This particular Fine nib was rather scratchy, particularly in horizontal strokes from right to left, but a bit of smoothing has taken care of that nicely. In terms of ink flow, this nib is perfection. It’s the perfect balance of wet-but-usable. This is one thing I have repeatedly found with CS nibs. They are decently wet, but not overly so. It doesn’t seem to matter which ink I use, they flow beautifully through the modern Conway Stewart nibs.

Overall, this was a fantastic find, and one that I am happy to add to my collection.