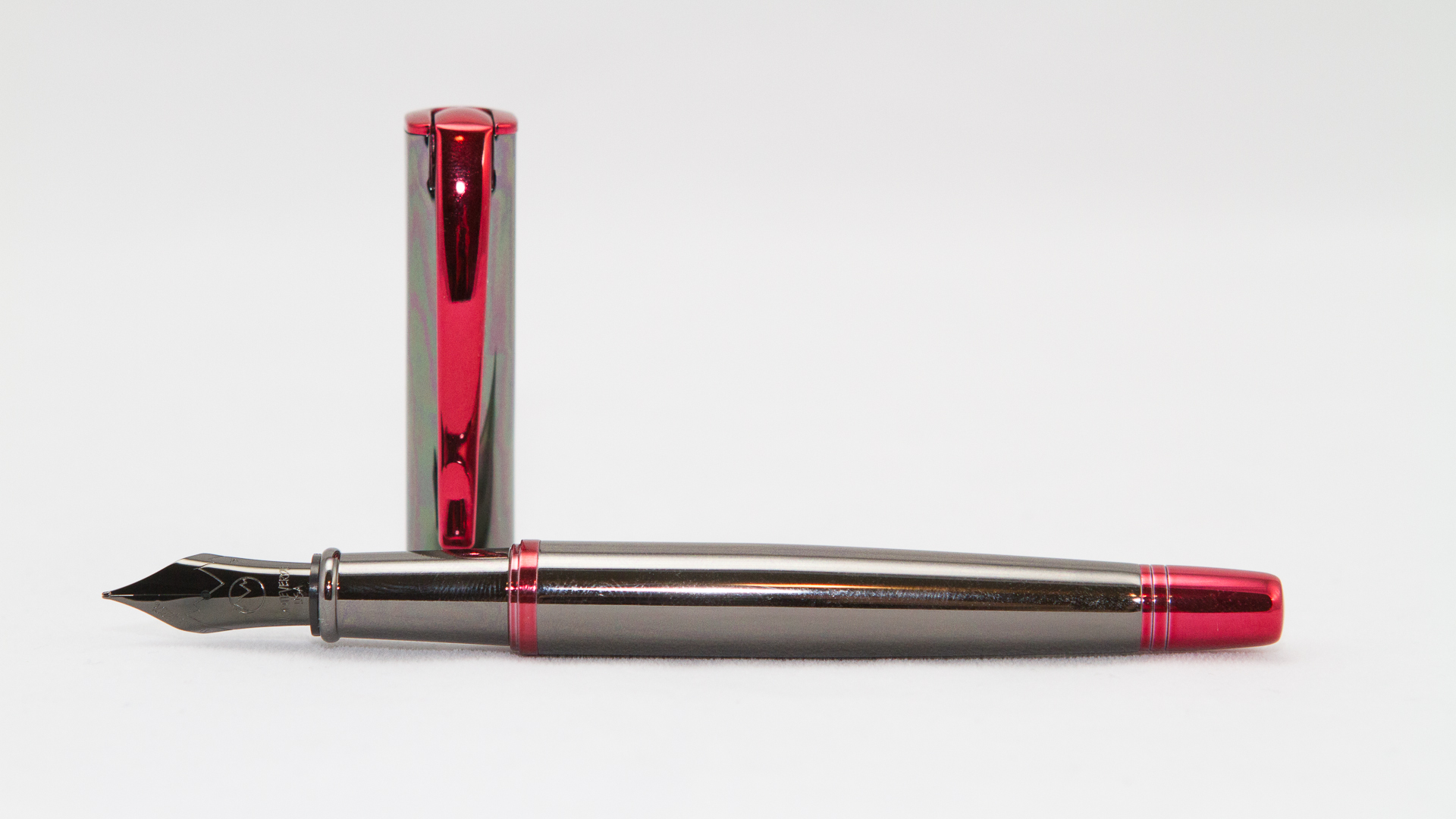 This pen was provided for review purposes by Pen Chalet. The Pen Habit was not otherwise compensated for this review.  The opinions expressed are based solely based upon our own real-world experiences with the pen.

Monteverde is a brand with which I am not overly familiar…I purchased the Invincia Deluxe Nighthawk a while back, and liked the pen pretty well, but never managed to get back to explore additional options available from the brand.  After spending some time with the new Monteverde Impressa Fountain Pen, however, I think it’s time I put a little bit of focus back on this U.S.-based pen brand.

The Impressa is a metal-bodied pen that comes in Black/Chrome, Black/Rose Gold, Pearl Silver/Blue, and the pen that I received for this review, the very sleek and sexy Gun Metal/Red finish.  Despite how some of the photos of the pen appear online, the metal body of the pen is shined to a true mirror finish, and the bright red hardware on the pen lend it the look of a modern race car.  The finish, while lovely, can pick up fingerprints quite easily, however. Fingerprints on a pen don’t bother me overmuch, and since I wear flannel shirts most of the time anyway, are usually remedied by a quick swipe with my shirttails. In any case, the Gun Metal Red pen is, if I may quote myself, “sexy as hell.” It is one great looker of a pen.

The cap of the pen starts of in a squared shape, and gradually transitions and tapers to a narrow cylindrical shape at the end of the barrel.  When the pen is capped, it is a smooth transition from one end of the pen to the other, with the cap fitting seamlessly with the barrel.  The section, which is made of the same gunmetal-finished metal, can get just a touch slippery, but not so much so that it makes the pen unusable. The pen can be posted; and while doing so can make the pen slightly back-heavy due to the heavy cap, the pen still feels fairly well-balanced.

As a metal-bodied pen, this pen does trend toward the heavier side of pens, at a hefty 42g when posted/capped. The clip is hinged slightly at the top of the cap, making it possible to clip the pen on thicker items (like the cover of a book, or the pocket of your jeans), but also can result in a slightly mushy-feeling clip which doesn’t feel terribly secure.

The cap, which is a pop-top, friction-fit cap, does go on and come off fairly easily, but it takes surprisingly little force to take the cap off of this pen–making it feel a bit insecure for wearing in a pocket. I have not had any issues with the cap coming off of the pen unexpectedly, so it may just be a bit of a psychological trick with wanting to feel/hear a more pronounced “click” when capping the pen.

The Impressa uses a cartridge/converter filling system, and can use standard international converters or cartridges. A converter is included with the pen. However, while the converter does seat quite securely, the end of the converter does tend to rattle against the interior of the barrel a bit, making it sound a little like the converter has come loose inside the barrel. That has never happened to me, but that rattle can be a bit unnerving if your pens get bounced around a fair bit.

This pen uses the standard #6-sized Monteverde nibs that are interchangeable with most of their other pens. The nib will come in either silver- or black-colored finishes.  The nib on my pen is a black-colored medium nib, which fits with the design and color scheme of the pen perfectly.  The nib is a delight to use. It is quite smooth, with only a hint of feedback. It hovers just barely below what I would consider a “juicy” nib, but still lays down a wonderfully wet line of ink. From the moment I put the nib to the paper, I had nary a problem with skips or hard starts. It just wrote, and wrote beautifully.  While writing a 5-page letter, I had no issues at all with the feed being unable to keep up with my writing.

This is a fantastic pen. I looks great, and writes wonderfully. But what really floors me is the cost. At $40USD, this pen is a ridiculous value.  Where pens like the Pilot Metropolitan or the Lamy Safari feel like “kids pens” to me, the Impressa feels like a great starter pen for an adult. It feels like it is very solidly made–far more substantial than either of the aforementioned options.

The Impressa, like most Monteverde pens, comes in a green faux leather box with white “satin” lining. It includes a converter and two cartridges (one blue, one black), a registration card, and instructions.

Pen Chalet is also offering a 10% discount to readers of The Pen Habit.  Simply enter the code penhabit in the shopping cart to receive the discount. This offer is good through 31 March 2014.