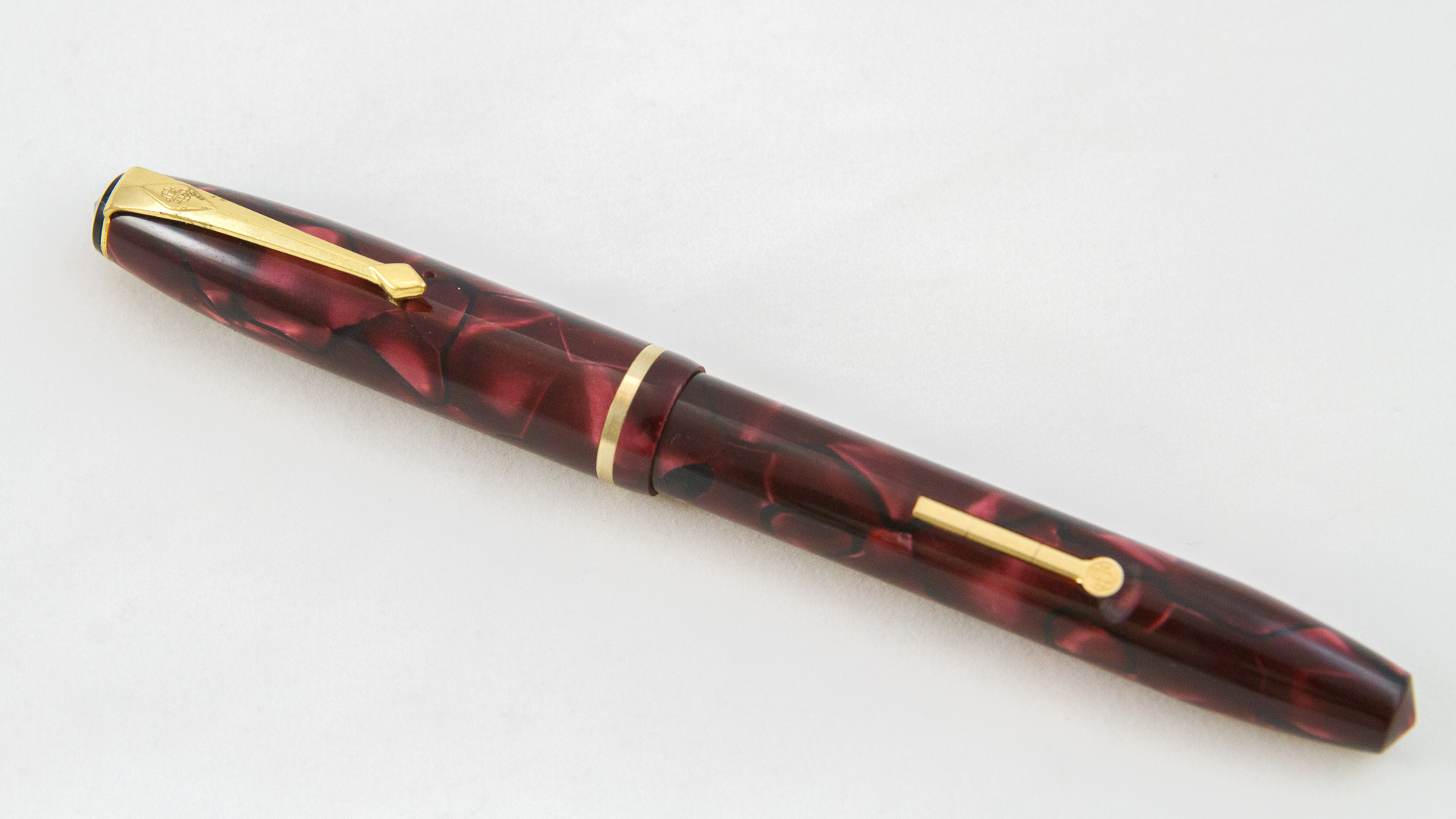 I found this 1950s era Conway Stewart 14 several months ago on eBay.  The pen had been fully restored, and arrived quickly from the UK (where the seller resides). Unfortunately, there were a couple of issues with the restoration that made the pen not completely usable.  The seller graciously offered to take the pen back to finish the repairs, but I decided that, as this wasn’t a tremendously expensive pen, this might be the perfect opportunity to work on some of my still shaky repair technique.  There were a few times I nearly chucked the pen down the garbage disposal in frustration, but after some patience and some online research, I was able to get the pen fully functional and writing nicely.

The Conway Stewart 14 is a very, very small pen.  At only 114mm uncapped, it is a requirement that I be able to post this pen to write with it. Unfortunately, this pen does not post well.  Friction will hold the cap in place, but not terribly securely, and I’m always afraid that I’m going to damage the cap by trying to force it onto the barrel.

The burgundy marbled material (casein, acrylic, celluloid?) is stunning, with a lot of depth and shimmer.  The pen has a gold-plated clip with the CS logo at the top and a diamond-shaped “ball” at the tip.  The clip is springy, but not overly stuff.  There is a gold-plated band around the cap, and a gold-plated filler lever.  There is a black “jewel” on the top of the cap, and the bottom end of the pen comes to a slight point as well.  The barrel contains the standard Conway Stewart imprint, still quite crisp.

There’s no other way to put this: this nib is miniscule.  Conway Stewart sizes this 14k gold nib as a 1A nib.  The nib itself doesn’t have any tip size indicator, but I’m guessing by the line this pen puts down that this is a broad nib, or possibly a medium stub nib.

One of the major issues I had with the pen in trying to get it to work properly is that this 1A-sized nibs are not very long.  They don’t extend very far below the edge of the section.  As a result, if the section is a little loose, or if the nib and feed aren’t in quite far enough, the pivot point of the nib against the section is in such a place that the nib will rock back away from the feed with next to no pressure.  Making sure that the nib and feed are properly seated in the section, and that the feed is properly heat set against this nib will help quite a bit, but if you put too much pressure on the nib, you run the risk of levering the exposed portion of the nib away from the feed.

The writing experience with this pen is different. As someone who usually does not post his pens, having to post this pen to use it takes a little getting used to. Additionally, the exceptionally short nib means that holding the pen by the section prevents the nib from being able to actually touch the paper.  As a result, I find myself having to hold the pen by the barrel rather than the section. Normally this bugs me a lot, but in this case, it’s not so bad because the barrel is a much more comfortable 11.3mm to the section’s too-narrow 8mm.

The pen leaves a nice, juicy line, that is on the stubbish side of a “round” nib.  (i.e., the horizontal lines are distinctly narrower than the vertical lines). I find that allowing this pen to set causes the ink to pool between the nib and feed, so the first couple of sentences after the pen has sat for a while are almost too wet.  I also find that this overt wetness of the pen can result in going through ink relatively quickly.

Once you get used to these idosyncracies (some of which I have since fixed by more properly heat-setting the nib and feed together), the pen writes quite nicely. Despite its wet lines, the feed never has a problem keeping up with long, fast writing sessions.  And once I got used to holding the pen on the barrel with the cap posted, I found I could write several pages without getting cramped or tired.  This is not a pen that’s mean for someone with long fingers (like mine) or large hands. But for someone with smaller hands, it would be a very nice fit.

And don’t forget that stunning material. Vintage Conway Stewarts are still quite affordable in the marketplace, which astonishes me. Their vintage pens had some of the most unique and beautiful materials I have seen on any pen. Why they aren’t more popular is simply beyond me.