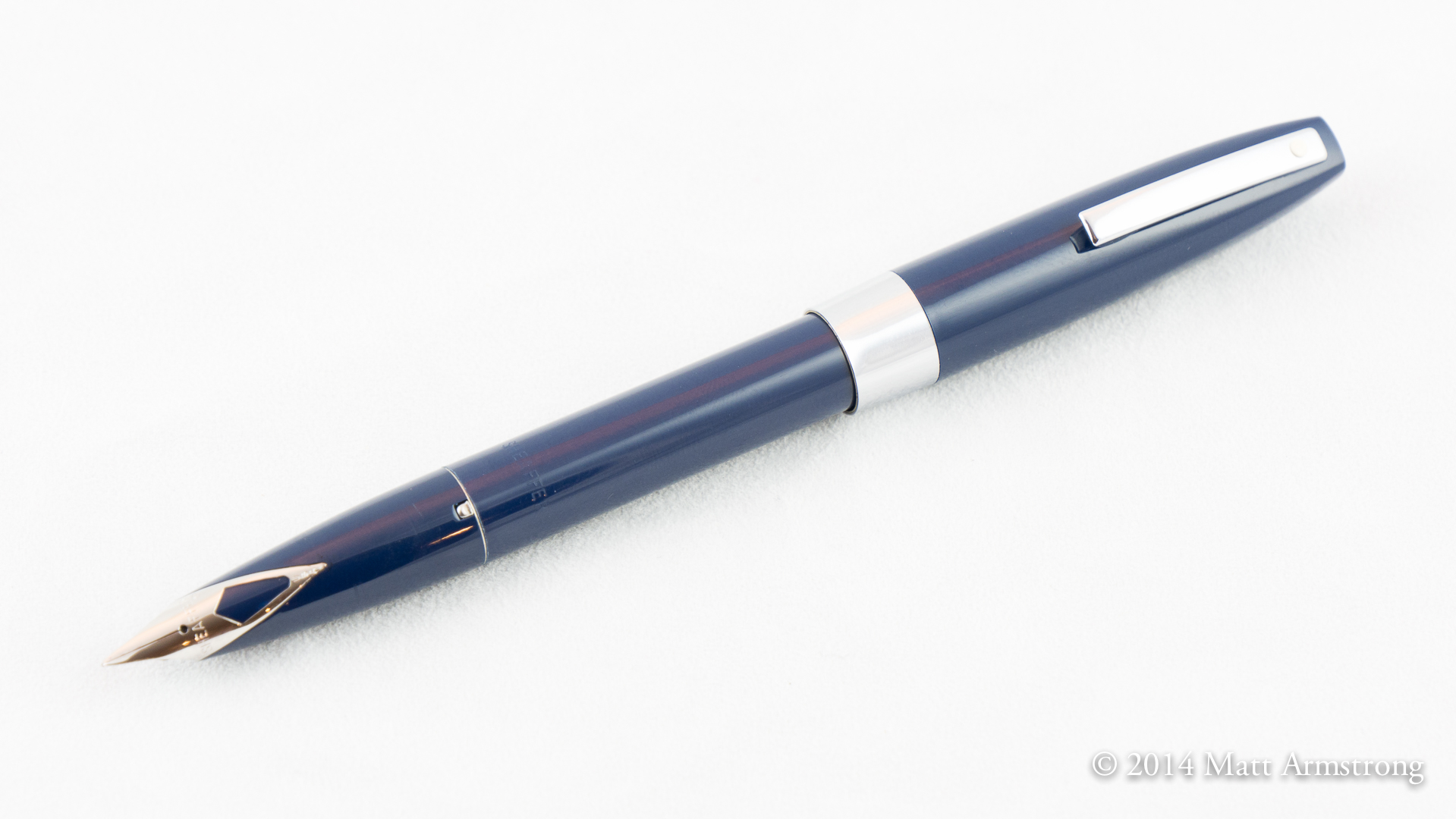 So, in preparing this review, I have come up with a new rule of thumb: I am not allowed to call something vintage if the item in question was made within the same decade in which I was born (in this case, the 1970s). There’s just something completely not right about a pen that’s only a couple of years older than I am being considered “vintage,” so for my own purposes, it’s not! (That, folks, is denial at work.)

Recently on one of my many perusals through “the ‘bay,” I decided I’d spend some time looking at Sheaffer pens. I had never owned a Sheaffer previously. I have not heard great things about modern Sheaffers, and have fairly limited experience in the vintage space. I had, however, heard that some of the older Sheaffers had wonderfully smooth nibs, and I wanted to give one a try. I also wanted to try one of Sheaffer’s well known diamond-shape inlaid nibs.

Stepping into the world of not-quite modern Sheaffers (*cough*denial*cough*) can be daunting. There are collectors who have compiled decades of Sheaffer pens back to the 1920s and 1930s, some worth hundreds or thousands of dollars. I wasn’t quite ready to dive in that deeply on a true vintage Sheaffer, but I wanted to see if some of the older pens were worth the effort of learning the language of Sheaffer.

That’s why, when I stumbled upon a $45 NOS (New Old Stock, for those not in the know) Sheaffer Imperial 330 for $45 from Teri at Peyton Street Pens, I figured that I’d give it a shot. I knew a pen from the 1970s was not going to be the pinnacle of fountain pendom, but it was worth a gamble. 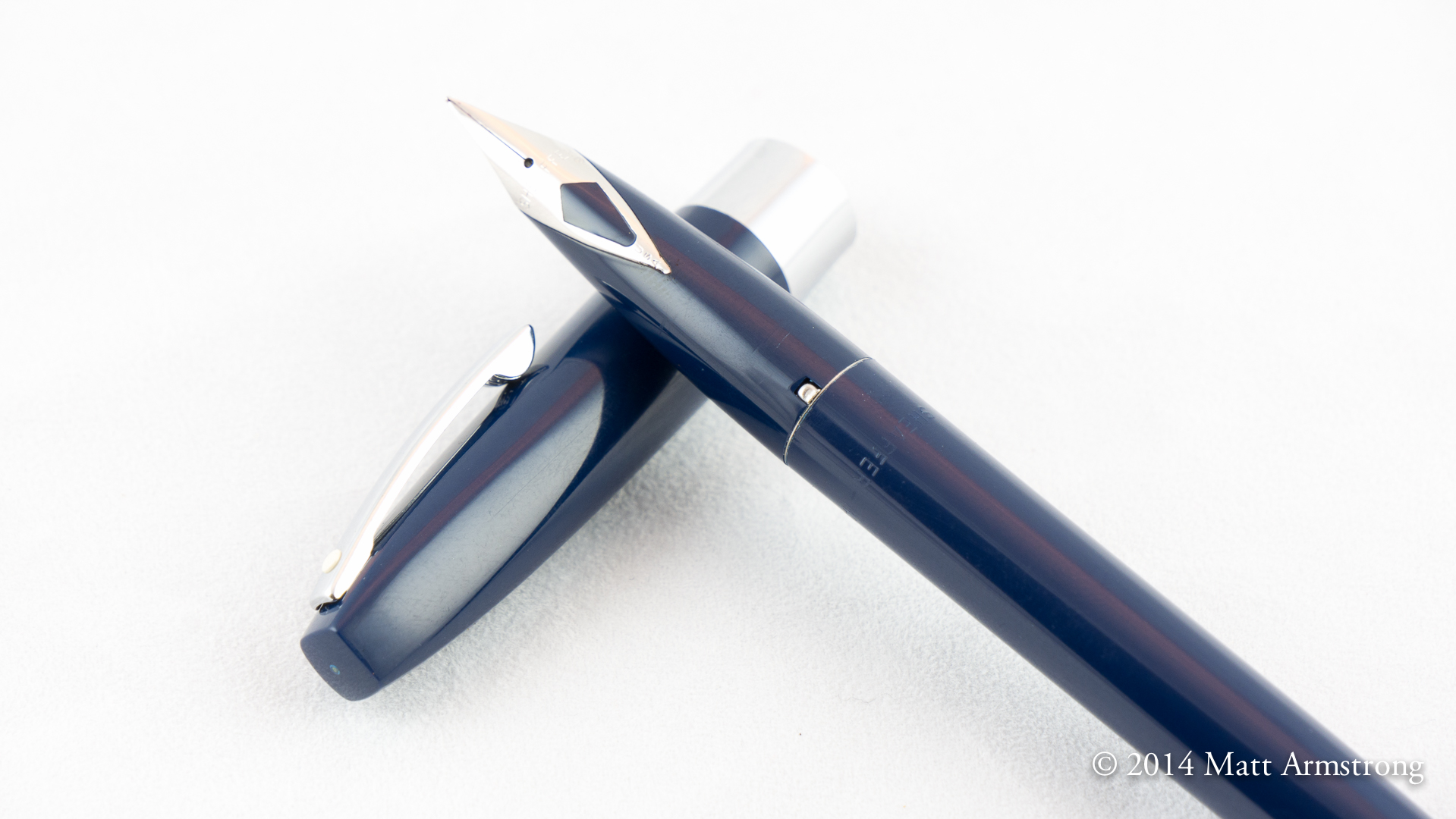 There’s no doubt that the Sheaffer Imperial 330 was not a top-of-the-line pen for Sheaffer even when it was new. It’s injection molded plastic (you can still see the little nubbins on the top and bottom of the pen from the injection molding). Additionally, the plastic of the barrel started showing signs of scratching and wear from capping the pen within a couple of days of use. The connection between the metal threads of the section and the plastic of the barrel were, to put it bluntly, horrible, gritty, and sloppy. It was a cheaply-made pen.

The pen has a bit of a square silhouette at the top of the cap, and transitions to a round silhouette at the bottom. The blue plastic is polished, but has no depth or shimmer. The body of the pen, particularly around the section and start of the barrel, have a shape not dissimilar to the Parker “51”–that unibody shape with no real stepdown from the cap. The smooth lines of the body allow for holding the pen in various locations to achieve the best writing angle for a wide variety of users.

All of the metal fittings on the pen are chrome-colored. The silver clip is stiff, but was attached to the cap very poorly. It would be quite easy to pull the clip off entirely with a little bit of force. If you’re the kind of person who likes to play with the clips on pens, be prepared to inadvertently amputate this clip not long after receiving it.

The cap itself is held in place by friction, helped by three little metal tabs that extend very slightly from the body between where the section and the barrel meet. The cap stays on pretty solidly, but you don’t get that satisfying “click” when the pen is capped.

The pen can be posted, which is good, because this pen is quite small. Were you not able to post this pen, it would be unusable for everyone but those with the tiniest of hands. The posted cap is also held in place by friction, but not terribly securely, which can cause it to pop loose every now and again, especially if you write with your fingers rather than your whole arm.

It’s a cartridge/converter pen, and it comes with a metal aerometric-style converter which works well enough, and has a pretty good ink capacity.

Then there is the infamous inlaid nib. Many people do not like the looks of these inlaid nibs. I was actually surprised how much I liked the nib’s looks. It’s certainly not your traditional fountain pen nib, the shape of which I love. But for me, this departure from the norm worked. It helped add a bit of aesthetic interest to what would have otherwise been a very boring pen.

I suspect, although I don’t know, that adjusting these diamond-shaped inlaid nibs would tend to be much more difficult than adjusting a more standard-shaped nib. Fortunately, I won’t ever find out, because the nib on this pen completely made up for the lackluster (if I’m being generous) remainder of the pen. The fine steel nib was wonderfully smooth, with nearly perfect ink flow. It was a relatively fine fine nib, acting more like a Japanese MF rather than a traditional western fine. And smooth. Very, very smooth.

I used the pen almost daily for about two weeks. And never once in that time did I have a single problem with ink flow, with hard starts or skips, or with anything else about the pen except occassionally forgetting that the cap didn’t screw off, and accidentally detaching the barrel from the capped pen. It was a super-solid writer.

Despite all I’ve said about this pen above, nobody could be more surprised than me that I actually like this pen. I’ve raked pens over the coals for having far fewer flaws than this one. It’s small, it’s cheaply made, and aside from the nib, I think it’s a rather unattractive little pen. But it writes so well, and when posted, fits so surprisingly well in my hand, that I just found myself wanting to go back to it again and again.