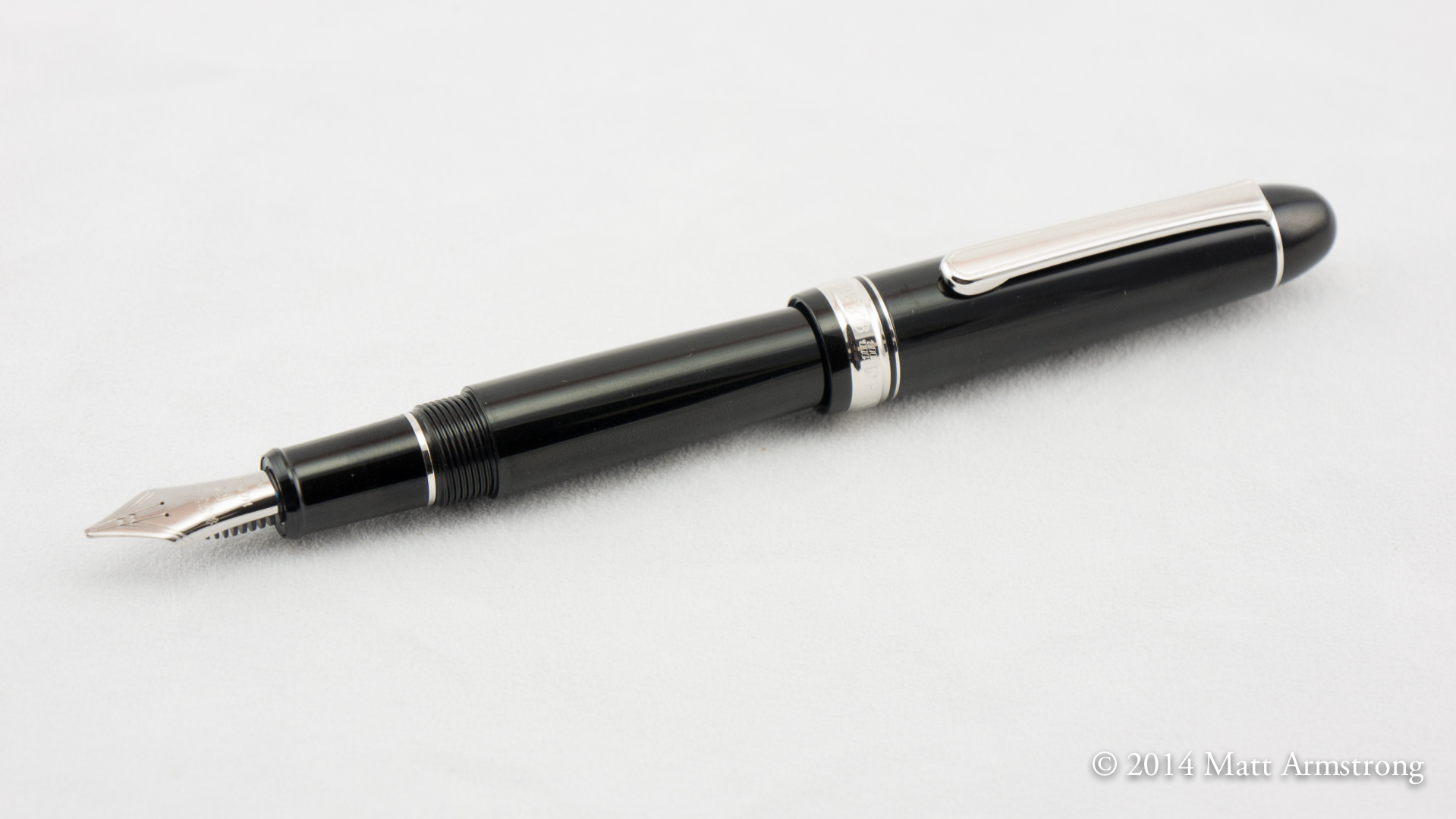 Several months ago, I did a review of the Platinum 3776 Century in the stunning Chartres Blue resin. It was a pen I liked a lot, but didn’t love: a fairly tradition (i.e., boring) cigar-shaped pen that was saved almost entirely by the material from which it was made. Over time, I’ve come to like the pen a bit more than I did initially, due to its solid construction and its performance as a spectacular writer.

One of my viewers reached out to me about a month ago and asked if I would be interested in reviewing the pen again…this time with one of Platinum’s stock music nibs. Having never used a music nib before, I thought it would be fun to revisit the pen a bit, as well as try one of these two-slitted, three-tined nibs for the first time. (Thanks, Paul!) 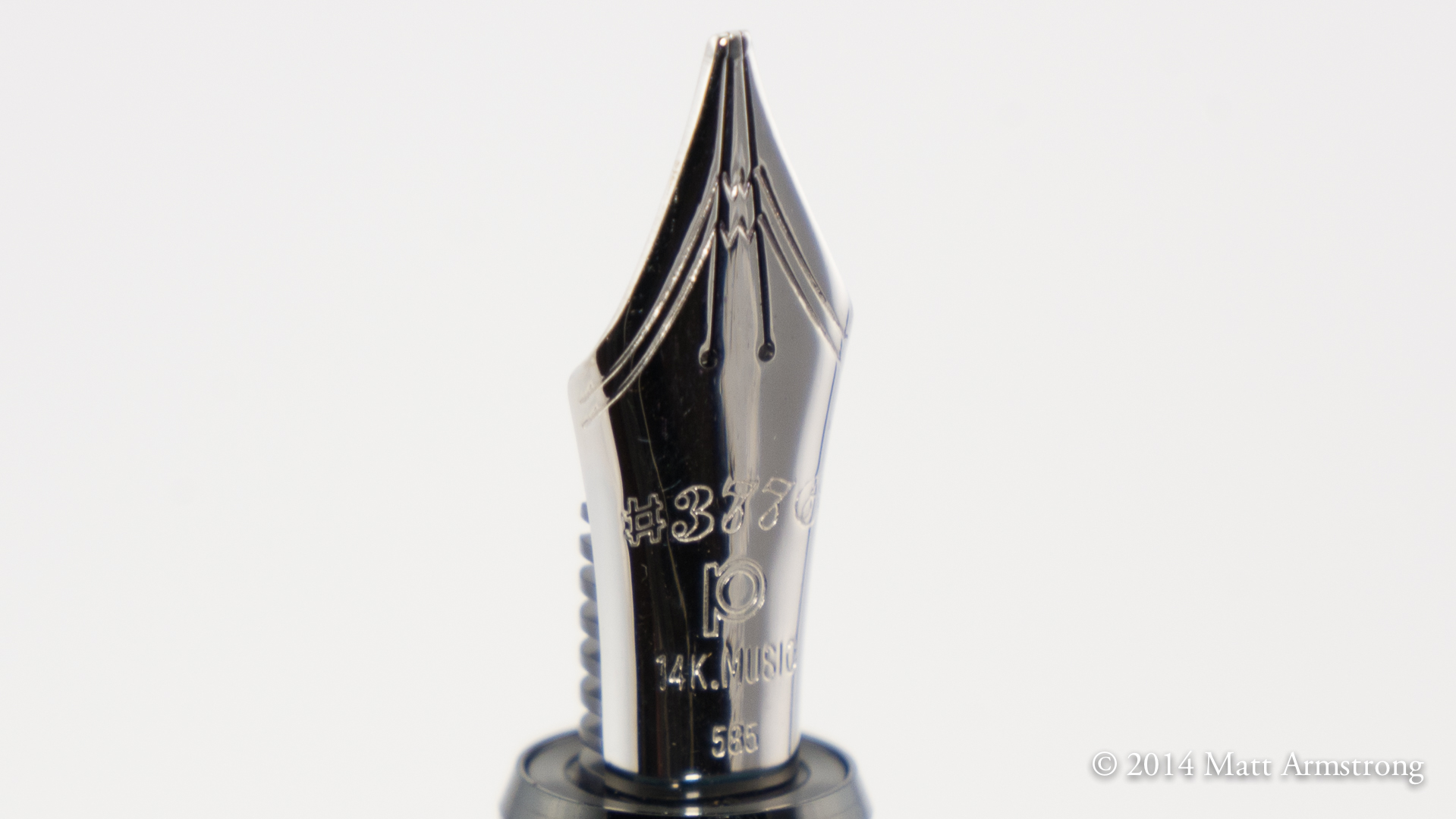 Up until just recently, the music nib was only available in the US on the black versions of the pen, not on the Chartres Blue or the Bourgogne (maroon) versions of their 3776, which is why I had never tried one. I’ve got enough generic black cigar-shaped pens, thank you very much. Since then, Platinum has made the music nib available on the blue and maroon versions of the pen, which is a step in the right direction. The unit I received was the traditional black with rhodium trim. As the body and construction of the pen are basically identical to dating sites for 40 year olds, I’m not going to spend a lot of time on that information.

What I do want to talk about, though, is the nib. Fountain pen folklore has it that music nibs were originally intended to help with notating music on the staff. As someone who has spent more than his fair share of time doing that, it’s fine for that. (Although, to be fair, I would NEVER notate by hand in ink. I’m not that good.) These days, since nobody notates music by hand, they’re pretty much just wide stub nibs. They are also, as a rule, rather wet writers. The two slits result in a pretty significant ink flow in most music nibs.

Platinum’s music fits the music nib stereotype: it’s wonderfully juicy and very smooth. It was a lot of fun to write with. The pen just glided across the paper on a nice wet line of ink. A lot of this comes, I think, from the fact that Platinum is actually tipping their music nibs. Unlike most modern stubs, their music nib had a rather hefty glob of tipping material which has been ground and smoothed wonderfully. Franklin-Christoph has just released a music nib that, from what I’ve been able to tell, is not tipped at all (like most modern stubs). I’d be interested to see how those would compare.

The ink flow that results from the dual nib slits also provided me with a quite lovely bit of shading on the ink I used to test the pen (Diamine Damson). The nib is quite rigid, however, so don’t get a Platinum music nib and expect to be able to do http://penhabit.com/speed-dating-atlanta/ or a online dating site that is free. (Seriously, Azizah. Seriously.)

Despite the fact that nib doesn’t flex, its line variation is still pretty good. I didn’t pull out my loupe and my micrometer, but if I had to guess based on the line width I see from my other stubs, I would place the Platinum music nib somewhere in the range of 1.2-1.4mm. It’s far too big for my daily handwriting. Even when using two lines of a Rhodia DotPad (for a total of 10mm lines), it’s a little too big for me to use without losing the loops in my Es and Ls.

So, overall, I like the music nib from a a novelty standpoint. I think they would be fun to use for larger writing, or for something like addressing Christmas cards. But for a daily writer, this just wouldn’t work for me. Also, the understated nature of these generic cigar-shaped pens just does nothing for me at all–especially in black. Now that the music nib is available on the Blue or Maroon versions of the pen, I might consider one in the future, but frankly, I just don’t know how often it would get used.