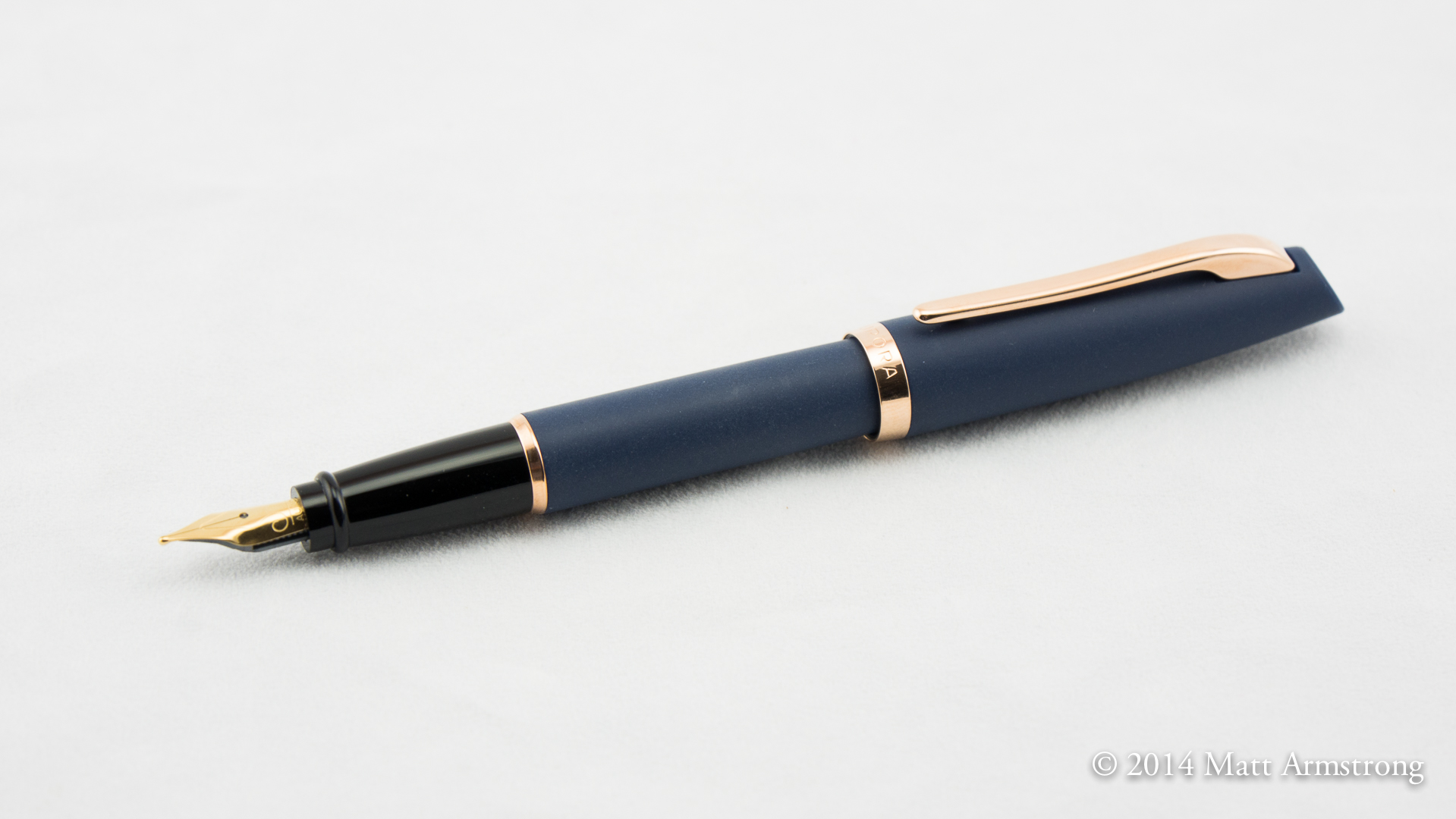 I love Italian pens. I suppose it’s because we have a lot in common. They’re flashy, attention grabbing, and when all is right in the world, they just sing. Also like me, they are expensive and temperamental, and sometimes, they’re just a hot mess.

Italians make up the largest portion of my current top 10 pens: Stipula Etruria Rainbow, Visconti Homo Sapiens Bronze Age, Visconti Van Gogh, Visconti Salvador Dali, and Omas Notti di Bologna are all up there. And my next dream pen is the Visconti Wall Street LE (in green, with a 14k nib, in case anyone is feeling particularly generous and wants to send me one…)

Because of my deep love for the Italian pens, I’m always excited to try another one. And I’ve had my eye on an Aurora pens for a while. (A Blue Mare, in case anyone is feeling particularly generous and wants to send me one…)  I was very anxious to try an Aurora nib since Aurora is, as I understand it, one of the few fountain pen manufacturers that still makes their nibs in-house rather than farming it out to one of the German manufacturers. I’ve heard many good things about their nibs. So, I was quite pleased when Rob offered to send me an Aurora Style to play around with and review. 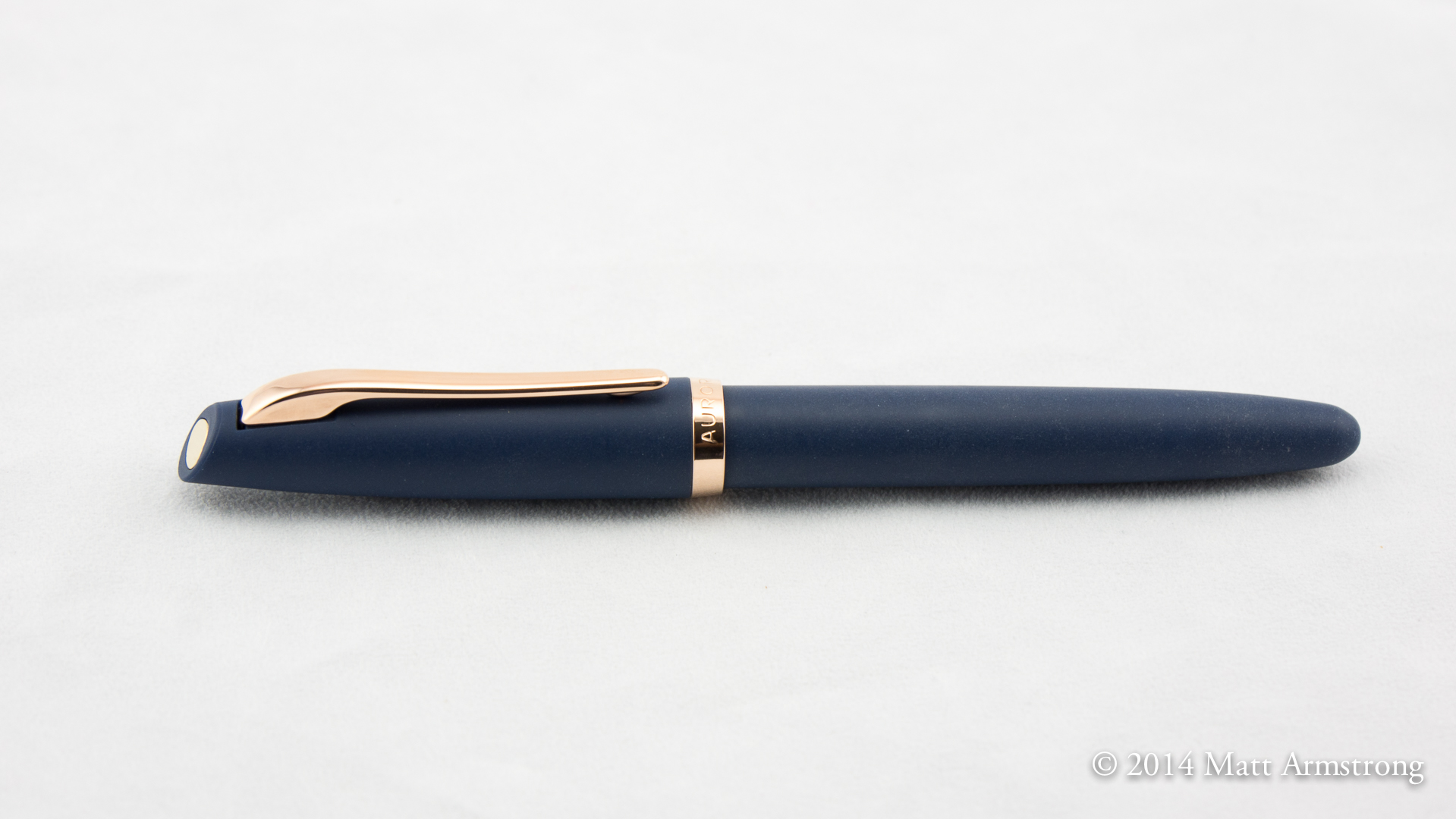 The Aurora Style that I received came in the Blue Matte/Rose Gold finish. It’s an interesting-looking pen. It’s very understated for an Italian pen, with a somewhat bland finish. It’s a relatively traditional shape on the barrel.  On the top, the cap comes to a steep angle, providing a rather severe look to the cap. I’m not a huge fan of the design of the cap, but it’s a minor complaint.

The matte finish of the pen feels…well…cheap. It has a sort of rubberized texture that feels as though you could scratch it off with your fingernail. The plastic of the pen (which looks to have been injection molded) feels rubbery–lightweight and insubstantial. Lightweight doesn’t bother me so long as the pen feels solid. This one doesn’t.

The pop-top cap, in particular, felt flimsy and cheap. While it stays securely on the pen, it rotates easily around the section, and there is a bit of slack in the pen. It simply feels loose all the time. I’m uncertain if this is a design decision, or the result of sloppy manufacturing, but again, it feels cheaply made. The gold-plated clip had some give, as though it were slightly hinged (although I don’t believe it is.)

The section, which is a shiny black plastic, tapers down to the small, gold-plated steel nib. The section is comfortable, if unremarkable.

The pen is a cartridge/converter pen. However, you should be aware that a) Aurora has opted to use Parker-style converters rather than standard international and b) they haven’t included one with the pen. For a pen that lists at $100, I find that omission a ridiculous. If I can buy a $6 pen from China that comes with a converter (cheap though it may be), a $100 pen should absolutely come with one. So, if you’re planning on using your style with bottled ink, be prepared to shell out an extra $10 or so on a Parker converter. The pen does come with a single cartridge of Aurora blue ink. 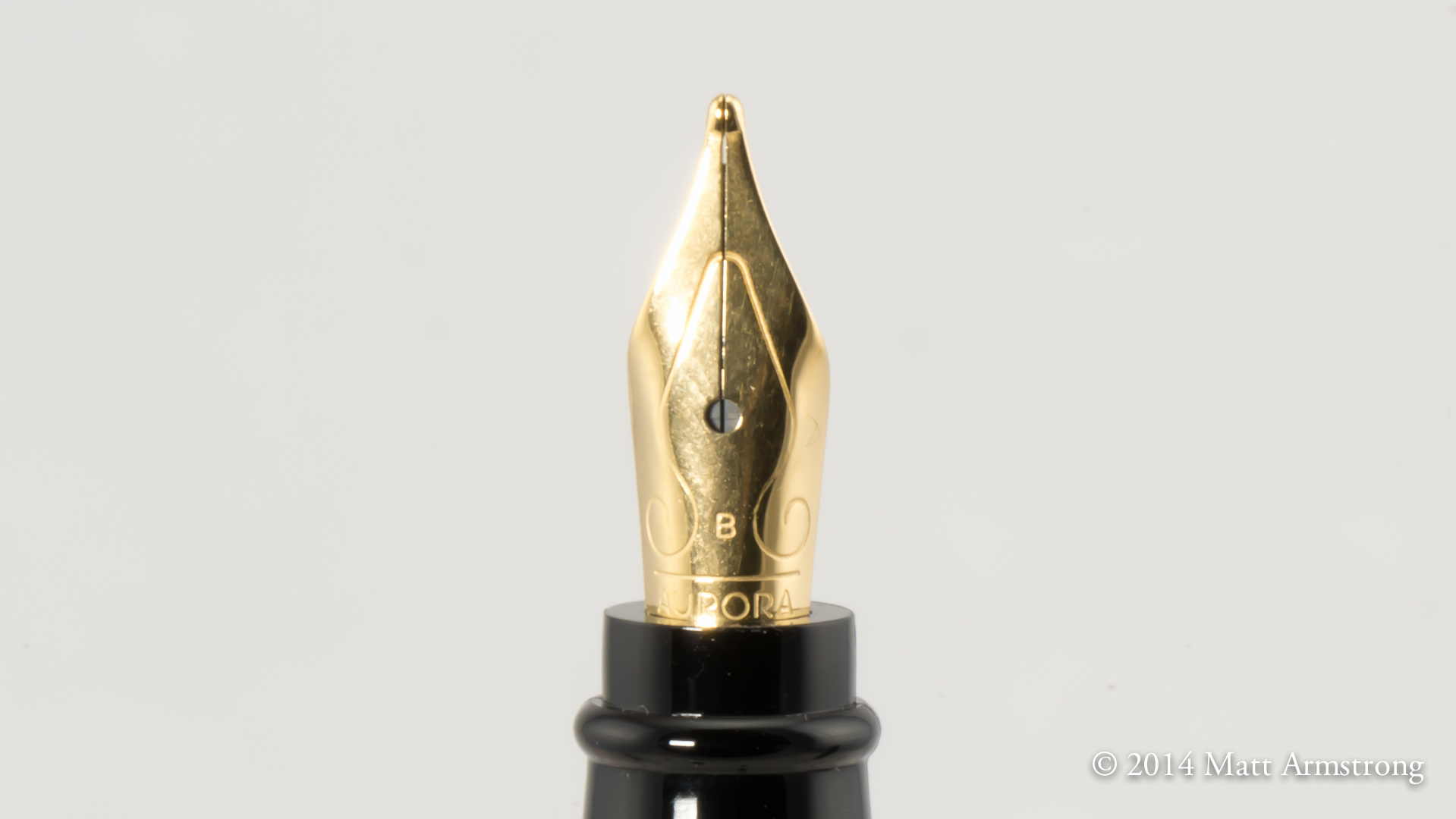 What the pen does get right, however, is the most important part: the nib. The gold-plated steel nib is small and plainly decorated. It’s nothing special to look at. But when it comes to writing, this nib is wonderful. Moderately wet, nice smooth ink flow with no issues. No hard starts, no skip, no choking on long writing sessions. And very, very smooth. It’s clear that, for all the time and attention Aurora didn’t spend on the body of the pen, they did spend it on the nib.

Being lightweight, it was comfortable enough in the hand, and I felt okay using it unposted. This is good, because I feel like posting the pen would begin to cause marring of the matte finish almost immediately.

When it comes to design and aesthetics, this Aurora is like the anti-Italian. It’s kind of bland, understated, and cheap-feeling. And, at $80-$100USD, it’s something of a disappointment. $100 will buy you a Platinum 3776 (direct from Japan via eBay), a TWSBI Vac 700 or 580 Rose Gold. It will buy you 2/3rds of an Edison or a Franklin-Christoph. All of those pens feel more solidly made than the Aurora Style. The value proposition just isn’t there for me on this pen. But, if the nib is any indication of what I can look forward to with some of Aurora’s higher end offerings, I may have to add another one or two to my list. (Like an Aurora Optima Auroloide in burgundy or blue, in case anyone is feeling particularly generous and wants to send me one…)