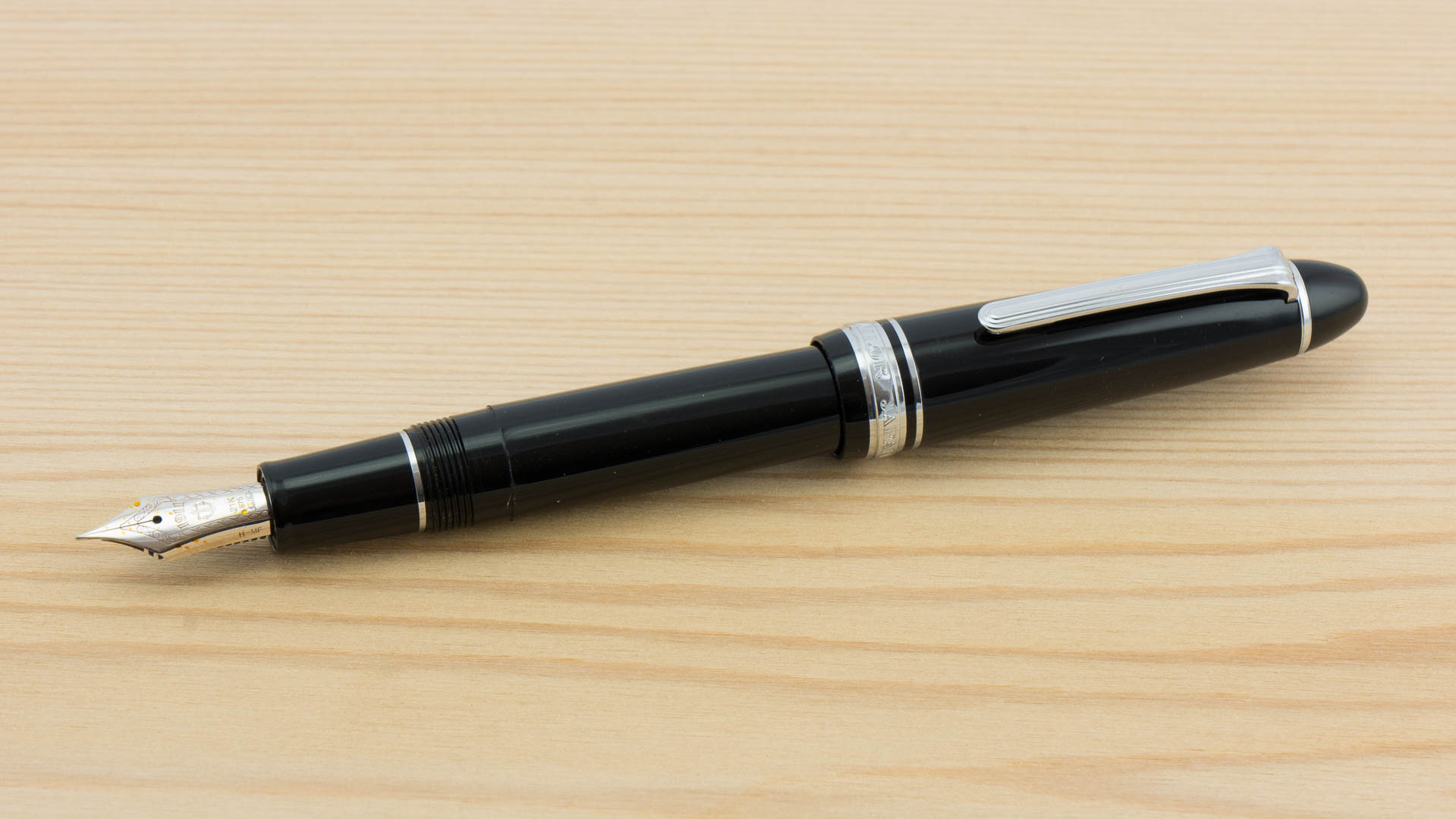 When it comes to fountain pens, there are few things that make me start to yawn faster than a black, cigar-shaped fountain pen. They’re just so boring. I get people who want a classic, understated look–I am just not one of those people. If I’m going to use these esoteric (and expensive) writing instruments, then I want pens that are going to make me excited to use them, not pens that could easily disappear into a drawer and be forgotten for the rest of my life.

I’ve reviewed several of these dark, torpedo-shaped sleeping pills in the last year and a half. In fact, one of my very first reviews was of a Montblanc 149…the granddaddy of boring, stuffy pens. As a writer, I like the pen a lot. But it’s not very interesting to look at. The Platinum 3776 Century in Chartres Blue avoided being labeled a boring, black pen by dint of its stunning blue resin. The Sailor Professional Gear was slightly different in that it looked like a cigar-shaped pen that had its ends chopped off. And the Black Platinum 3776 Century was dull to look at, but it had a fun music nib.

Despite my apathy toward this style of pen, I have been urged repeatedly by folks to try more Sailor pens. Sailor, as a Japanese manufacturer, specializes in either understated pens using understated materials, or wildly expensive presentation pieces with amazing levels of intricate handmade artwork. There’s not a lot of in-between with them. 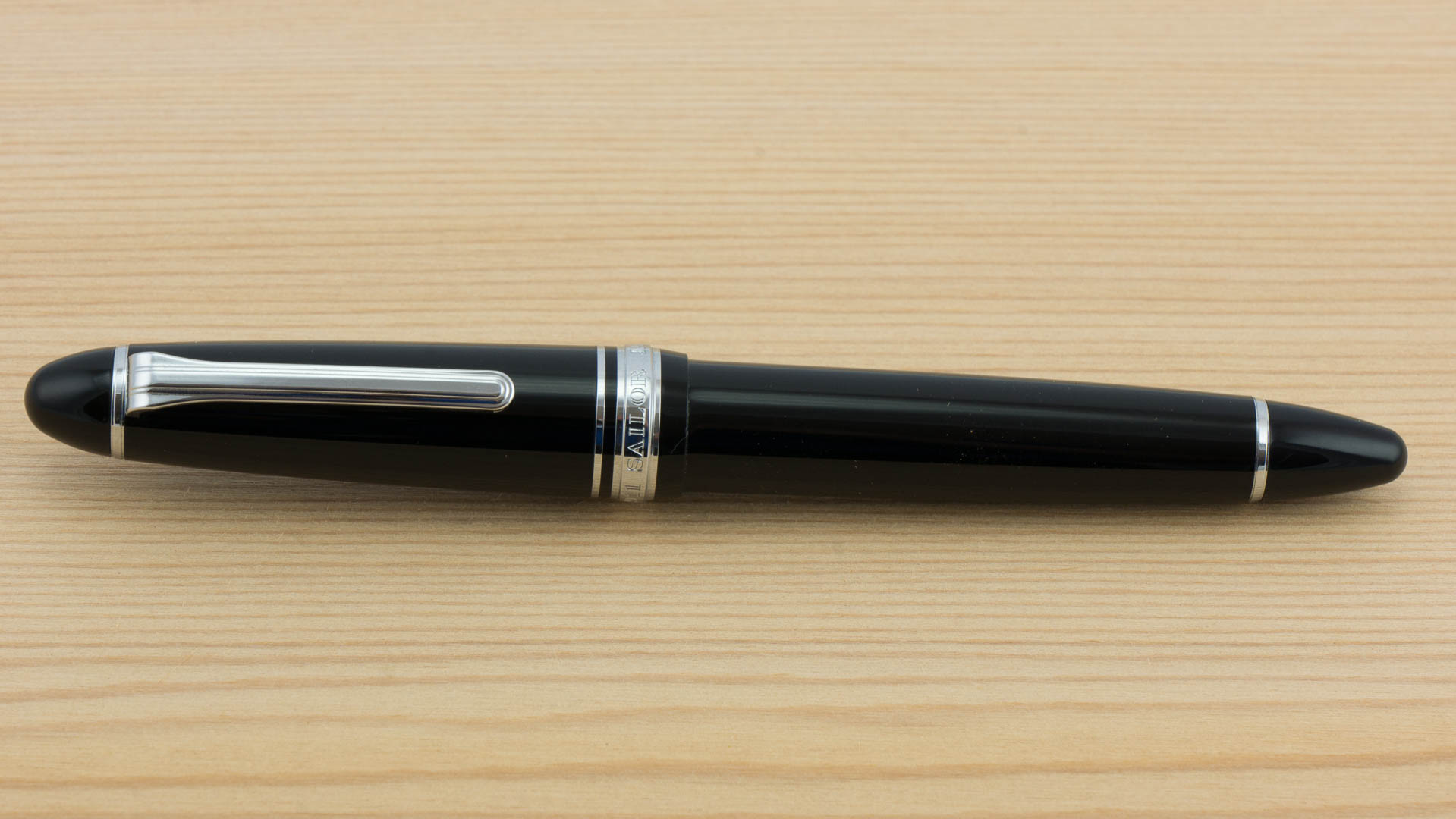 I purchased this Sailor 1911 Large from a Japanese eBay seller at a very steep discount from what I would have been able to get it in the states. It saved me a lot of money, but it’s important to note that if something goes wrong with the pen, chances are that you will not be covered under warranty repair. Just keep that in mind.

As expected, the Sailor 1911 Large is a standard, black, cigar-shaped pen. For size comparisons, it is almost identical in size to the Platinum 3776 and the Jinhao x450. I ordered the version with the Rhodium-plated trim rather than the gold-plated trim. The pen’s acrylic is polished to a piano-black shine, and is glossy and smooth to the touch. The clip is streamlined and solid, and does its job well without drawing much attention to the pen. Perhaps the most “blingy” portion of the pen is the small metal band around the bottom of the cap that has the brand and model text engraved into it.

While there is nothing particularly exciting about the pen, Sailor has made sure that they treat the understated materials with the utmost respect, and turn out a fine quality product as a result. The pen feels very well-made. The threads are cut with precision, and glide smoothly. The fit and finish of every part seems quite nice.

The pen utilizes the cartridge/converter filling system, and uses Sailor’s proprietary cartridge and converter formats. The pen does comes with two cartridges (one blue, one black), and an included converter.

Many of Sailors pens come with 21k Gold nibs, which is rather unusual in the industry. I’m not certain of the reasoning behind this, as the higher purity of the gold would seem to indicate a higher cost without any benefit of which I am aware. That being said, Sailor’s nibs are lovely to look at. 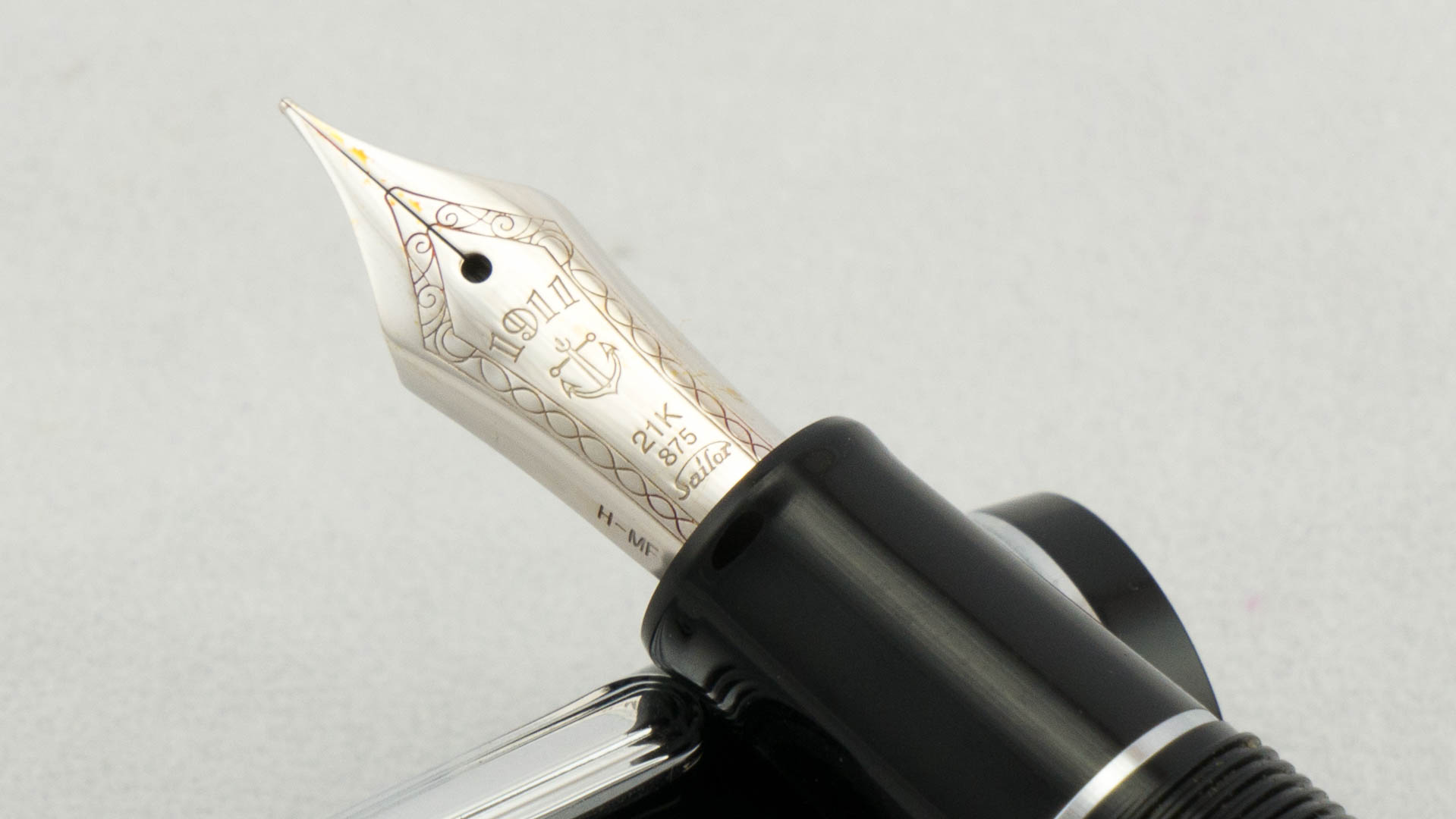 I ordered the Hard-Medium/Fine nib with my Sailor. At the time, my thought was that I wanted to have at least one very fine nib in my collection so that I had one available if I ever needed it. This was probably a mistake for me. As someone who prefers a western medium nib, the Sailor MF nib was far too fine a point for me to use regularly. It writes well, but doesn’t lay down enough ink to show off the ink’s character. If I had it to do over again, I’d probably order a broad, and have a nibmeister ground it down to a stub or an oblique.

The nib can be coaxed to provide a bit of line variation, but as a “hard” or rigid nib, it’s not really designed for any sort of flex or even bounciness, despite being 21k gold.

Despite my personal preference for a wider nib, the writing experience of the nib isn’t bad. The tines on my pen were out of alignment. With such a fine point on the nib, I found that getting them re-aligned was a bit trickier than it has been on some of my other pens, but I was eventually able to get it there, and smooth it out a bit. The nib still has a bit more feedback than I prefer, but again, I suspect that has more to do with the narrowness of the writing tip than with a poor polish job from the factory. I had no ink flow issues, skips, or hard starts.

Overall, if you’re the kind of person who likes the understated look of a black, cigar-shaped pen, then the Sailor 1911 is a very nice one. I personally prefer the feel of the Platinum 3776 over the Sailor 1911, but the difference is very minor. Both perform admirably.