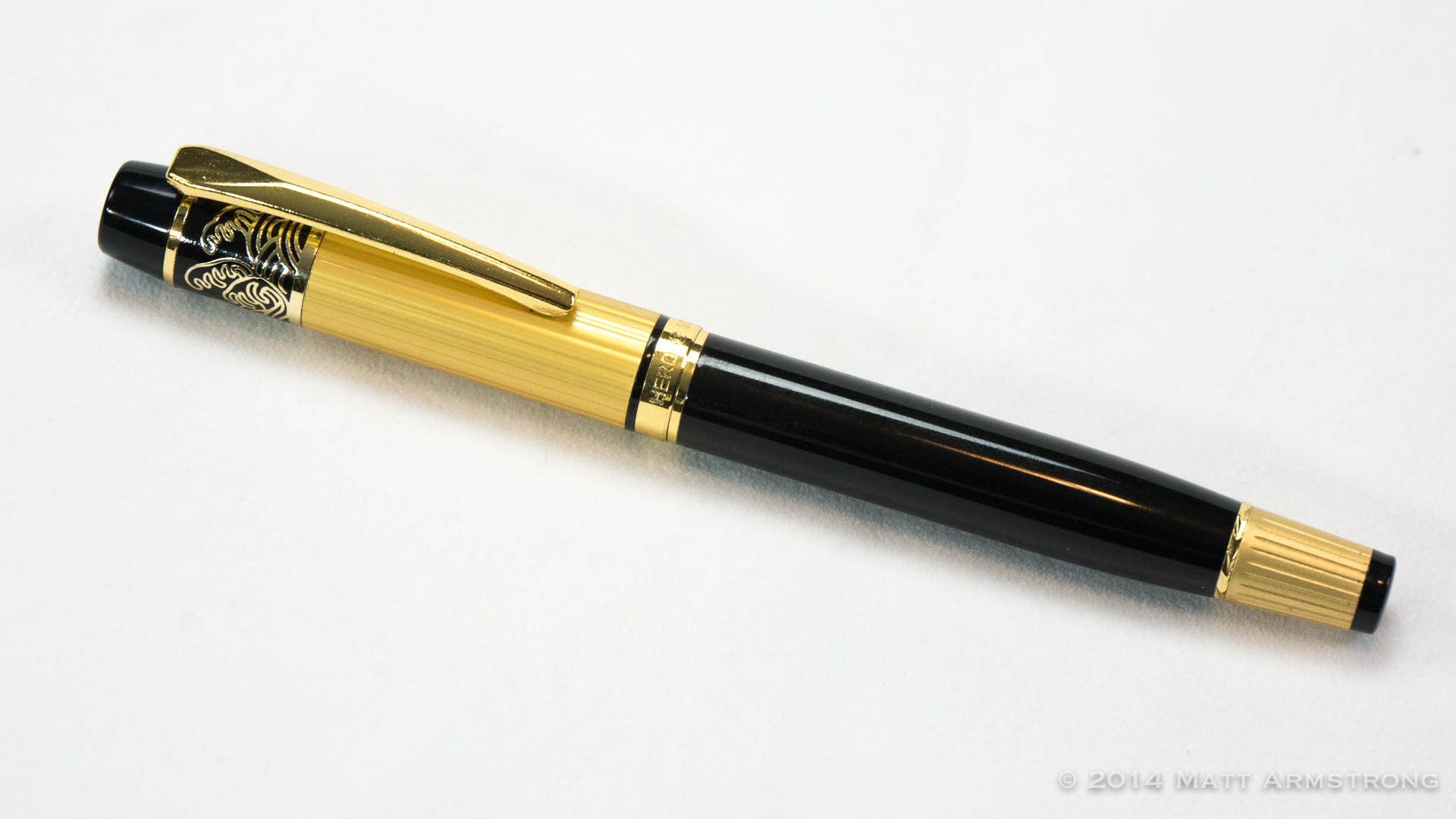 A special thanks to my father for allowing me to borrow this Hero 901 from his personal collection in order to put together this review.

Once upon a time, I found myself pretty enamored with the inexpensive Chinese pens I could find on Ebay. I liked the ability to get access to a large number of inexpensive pens, many of which wrote quite well for the price and looked (if perhaps not felt) very high-quality. In the last year or so, though, I’ve becomes less enamored of those inexpensive Chinese pens. Most of them are quite heavy, and my experience has been that they are, perhaps, not as solidly built as they appear. Nevertheless, for many folks–most of my family members included, the glut of inexpensive Chinese pens has fueled a true obsession with fountain pens. And this, I believe is a good thing. 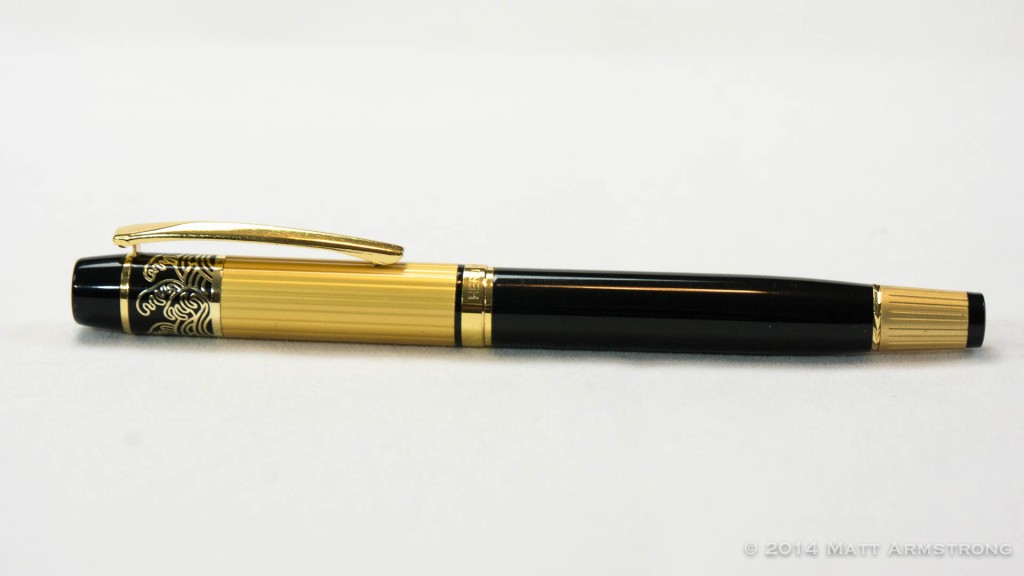 The Hero 901 is one of the myriad inexpensive Chinese-made pens that have graced the slots in my father’s pen case. I believe this pen was gifted to him from another family member. It does not appear to be a knock-off of any pen design that I know, and despite that, still seems to have a nice bit of flair to it.  The metal-body is a combination of black lacquer and gold-colored metal. Along the top of the pen is a lovely Asian-style wave motif, which is offset by an interesting, almost corrugated, gold metal running around the majority of the cap. The gold-color clip is study, but slips out of the cap a bit when pulled on. It doesn’t feel as though the clip is in danger of coming lose, but it does feel a little slack.

The pen is a pop-top pen, with the cap being held on quite solidly, and a very solid “click” when you put the cap back on the pen.

In the hand, the proportions of this pen feel just slightly “off” to me. It’s not enough to make using the pen unbearable, but it certainly lacks the precision balance you might be used to when using higher-end pens. The pen is a very heavy 50g when posted/capped. And paired with a lightweight, plastic section and a smaller, #5-sized nib, the pen doesn’t feel quite right in my hands. Fortunately, you can drop 18g from the weight simply by not posting the pen. At 122mm, I find the pen just long enough to use fairly comfortably without posting.

Where things started to get a little dicey for me, however, was in the nib.

The Hero 901 comes with a steel “IPG” nib that is entirely lacking a size marking. The nib is either a slightly wide fine or a slightly narrow medium. I hesitate to review the nib on this pen at all because, if you’ve used these Chinese pens before, you know the only thing you can rely on with these pens is the irregularity of their nibs. At such a low price point, quality control does not seem to be the highest priority. I have no doubt that some Hero 901s will come with wonderfully-writing nibs. Others (this one included) comes with poorly-writing nibs. It was also, upon my first inking of the pen, a right mess: dry & scratchy, and quite unenjoyable to use. Fortunately, the pen is inexpensive enough that the nib is an excellent candidate for learning to work on your own nibs. And, as a standard #5-sized nib, you should be able to replace it with a #5 nib from other manufacturers.  (My personal preference is the #5 nib from Franklin-Christoph.)

Upon examination, I discovered that the nib slit was so tight toward the tip of the nib that no ink could flow through. Also, the tines were quite out of alignment. I adjusted the nib slit using some brass shims, and pushed the tines back into alignment. Then I smoothed the whole thing with Micromesh. In the end, the pen wrote quite well for me, but it did take a little bit of work to get there.

Final Verdict: This is a nice pen. It’s a bit on the heavy side, but feels very solidly made. (Much moreso than pens from other Chinese brands I’ve tried.) Once the nib was adjusted to put out a decent amount of ink, and the tines were aligned, it wrote well too. If you’re just getting started in pens, this may not be the best pen to get you started. But if you’re interested in learning how to adjust your nibs, purchasing the 901 may give you something to work on, and quite a nice writing experience when you’re done. I’d give it a tentative recommendation for folks who like heavy pens, but a slightly narrow grip. And, of course, anyone who doesn’t mind a little bit of bling.