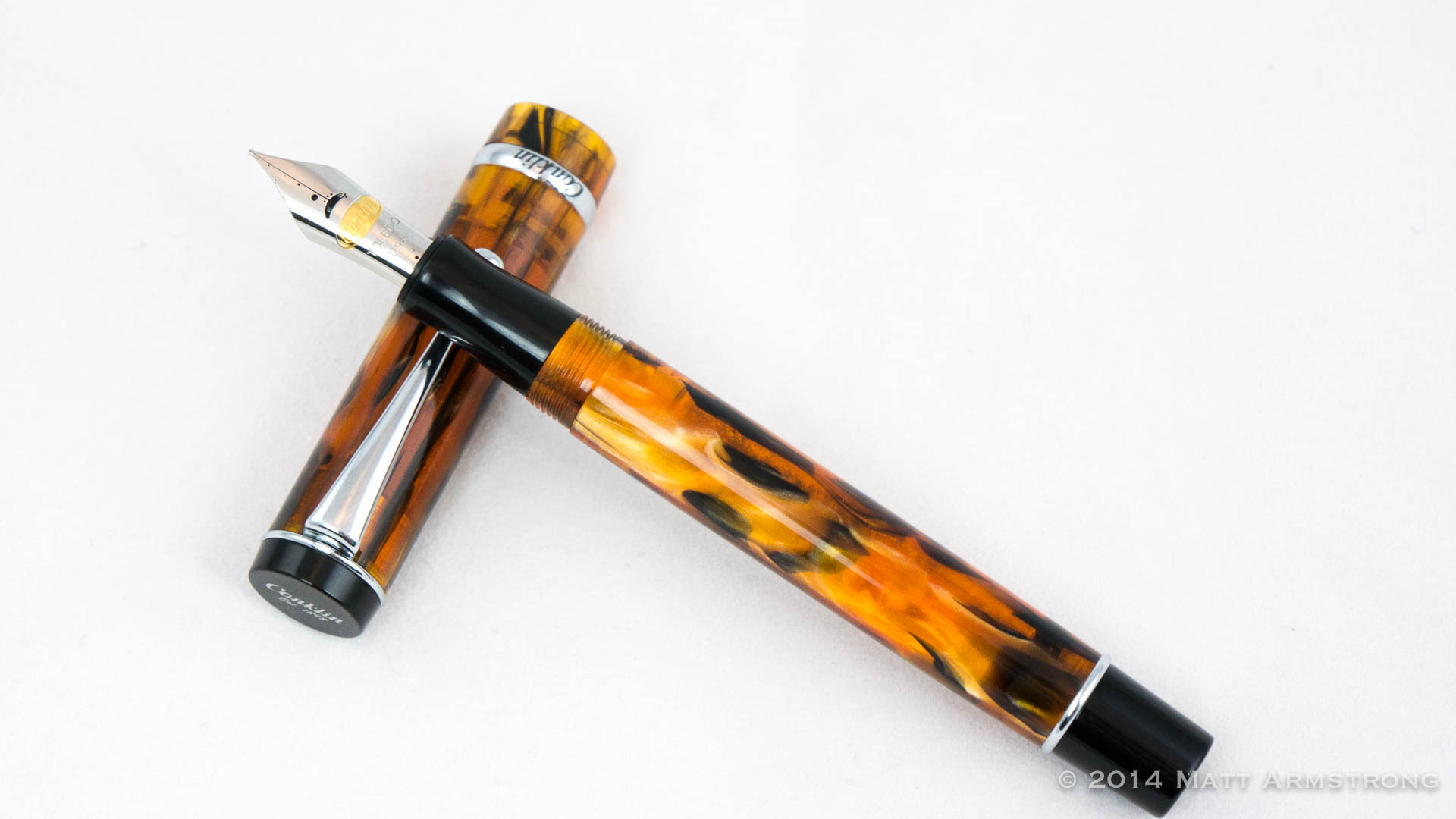 Prior to my purchase of this Conklin Duragraph, I had never had any experience with Conklin Pens. Conklin was one of the earliest manufacturers of fountain pens in the United States, and were quite well regarded from what I understand. As fountain pens fell by the wayside, however, Conklin was one of those names that winked out of existence. Several years later, the company name and designs were purchased and the Conklin name was reborn. Although I’m not a scholar of Conklin history, I understand that the man who revived the company (who is also in the process of “reviving” the Esterbrook name) sold the company in 2009 to Yafa.

Having had no experience with the Conklin name, either before or after its revival, I had no idea what to expect when I ordered the Conklin Duragraph. 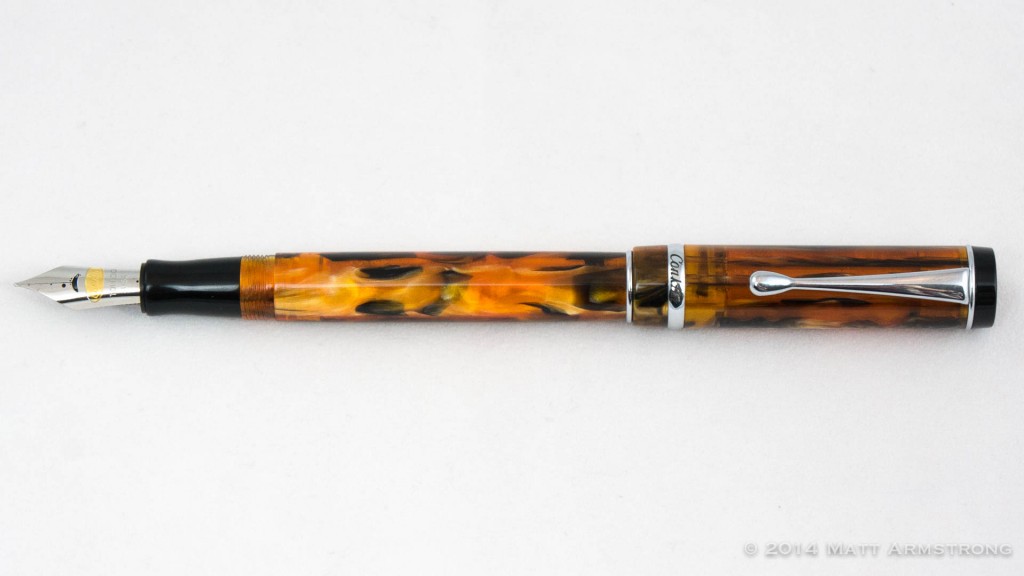 Overall, I find the Duragraph to be a lovely pen. The modern Duragraph comes in three colors: cracked ice, forest green, and amber. From the photo above, you can clearly see that I opted for the Amber resin  version of the pen. The material is warm and lovely, with an almost tortoiseshell feel to it. It seems almost as if the material is in motion. Plus, the resin is partially translucent, which results in a nice effect.

The pen is a traditional (even old-fashioned-feeling) flat-topped pen and feels well-constructed. The tolerances on the threads are fairly tight. The clip is stiff and solid. The printing on the cap is clean. The engraving in the cap ring is sharp. And even the masking on the nib’s gold plating is done well. The workmanship of the pen doesn’t feel sloppy or slapdash.

The pen utilizes the standard international cartridge/converter filling system, and comes with a converter and two standard international short cartridges. The threads of the section, unfortunately, are made of metal, so you can’t use this pen as an eyedropper, which is a shame. The size of this pen, along with the partial translucence of the barrel, could have resulted in some lovely ink sloshing and a massive capacity.

Holding the Duragraph is actually quite comfortable, largely thanks to the concave section. So long as you don’t post the pen, it’s quite light and very nicely balanced. The threads aren’t particularly sharp, so even if you hold the pen a little higher on the barrel than the section, it shouldn’t drive you crazy.

As for posting: well, I wouldn’t recommend it. The pen can be posted, but a small metal ring between the barrel and the end cap keeps the pen from being posted deeply. (This may be a design mistake, or it could be by design to help prevent cracking of the cap lip. ) The cap posts solidly, but very shallowly, resulting in a very long pen. Writing with it posted feels like trying to write with the skinny end of a baseball bat. Fortunately, the pen is large enough that it can be used comfortably without posting. 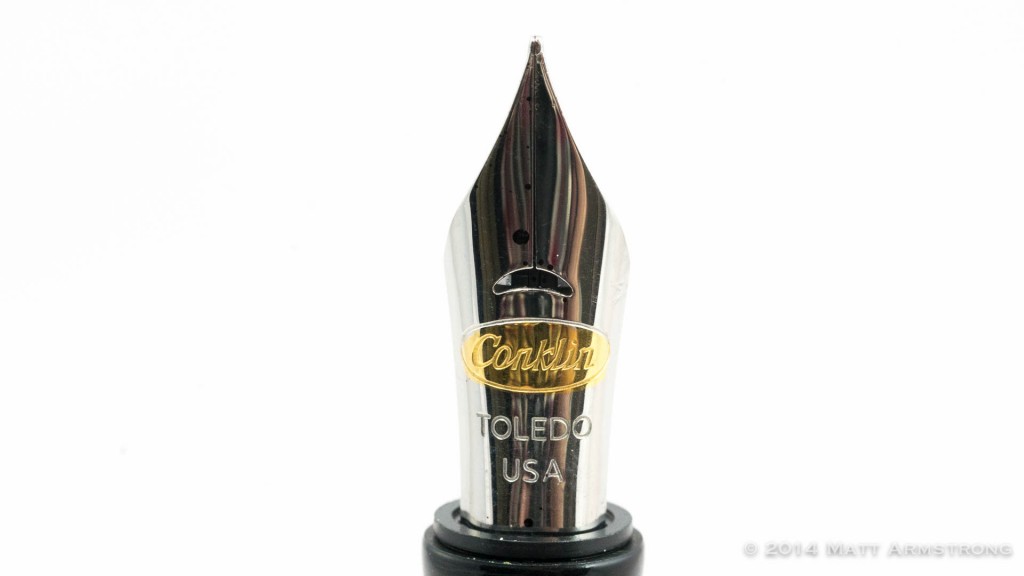 Then we come to the nib. The Conklin steel nib has a simple design, with a crecent moon-shaped breather hole and a simple gold-plated oval with the Conklin name. It’s fairly boring nib design-wise. The nibs tines feel a bit longer or more slender than a regular #6-sized nib, however, and this can result in a bit of bounce to the nib when you’re writing. Not enough even to classify this as a “soft” nib, but enough that it doesn’t feel completely nail-like.

The nib tip is, of course, where the rubber meets the road. Unfortunately, in the case of my particular pen, the result of the rubber meeting the road was a nasty case of roadkill. I ordered a Medium nib on my pen, per my usual nib preferences. Unfortunately, Conklin’s idea of medium is much closer to Pilot’s or Platinum’s idea of fine than it is to any definition of medium I’ve ever seen. It wrote like my Sailor H-MF. It was also relatively dry. Not so much so that it wouldn’t write, but not wet and juicy.

The bigger issue, however, was one of nib polish. In short: it wasn’t polished. At all. Writing felt as if the factory had started a coarse grind on the nib, and had stopped there. Anyone who has ever ground their own nibs knows the feeling I’m talking about: where the nib tip is rough enough that writing on Rhodia paper feels a lot like writing on Sandpaper. It was a tremendously unpleasant sensation to put this nib tip to paper.

Fortunately, if you’re familiar with adjusting and smoothing your own nibs, this is a very simple problem to solve. I widened the tines a touch, which both increased the ink flow and widened the line to something at least approaching a Japanese Medium.  I also polished the nib quite a bit. I have never had a nib on any fountain pen that was as poorly polished as this nib was. Fortunately, that was the only real thing wrong with the pen. After this polish was done, however, I quite enjoyed my time with the Conkin Duragraph. It’s a lovely pen.

And, if I’m being honest, at $44 USD, the Duragraph is pretty good deal even with the nib problems. That being said, based on what I’ve seen online, modern Conklin pens have a history of quality control problems. Based on my own experience, I’d say I have to agree. My pen was beautifully built; the only real issue was the polish of the nib tip. I’m just fortunate that the issue with the pen is one that I could quickly and easily resolve myself. I’m certain the retailer from whom I purchased would have accepted the pen back if I had complained, but it was just easier for me to break out my Micromesh.

Would I buy it again? I believe I would. It’s a nice pen (especially for under $50) and it fits my hand well. I’ve even been eyeing the forest green version of the pen because I feel that the world needs more green pens. I just hope that they can get their nib QC locked down a little tighter. Then they’ll have a real winner on their hands.