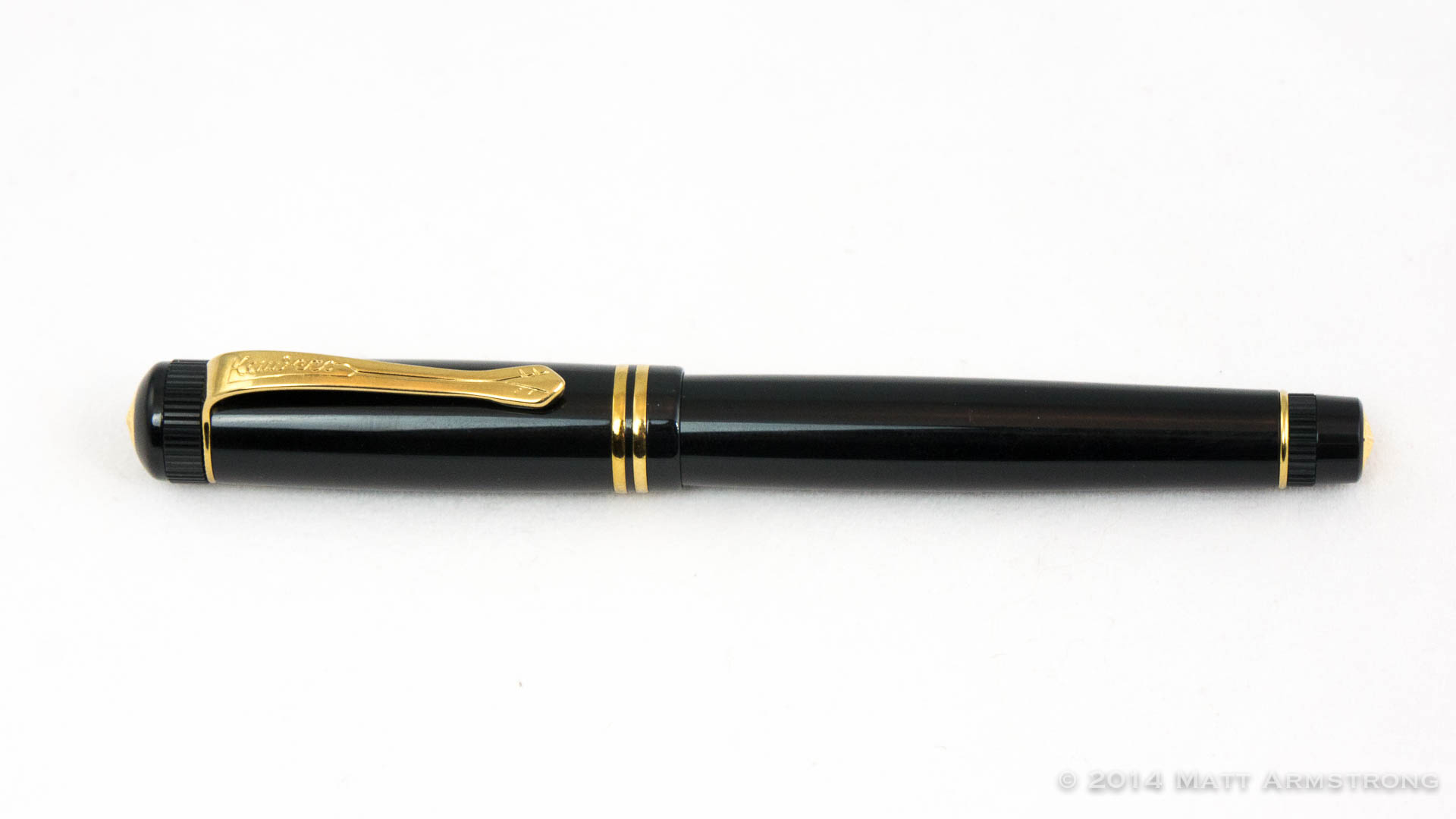 A few months ago, when Kaweco was kind enough to send me several pens to review, the pen I was most excited to ink up and start using was the Dia2. It was another of the full-length pens in the Kaweco catalog, and unlike it’s cousin the Allrounder, it was made from acrylic which I prefer to metal. Now normally, I’m not a fan of black acrylic pens with gold accents, but this one hit all the right buttons for me. 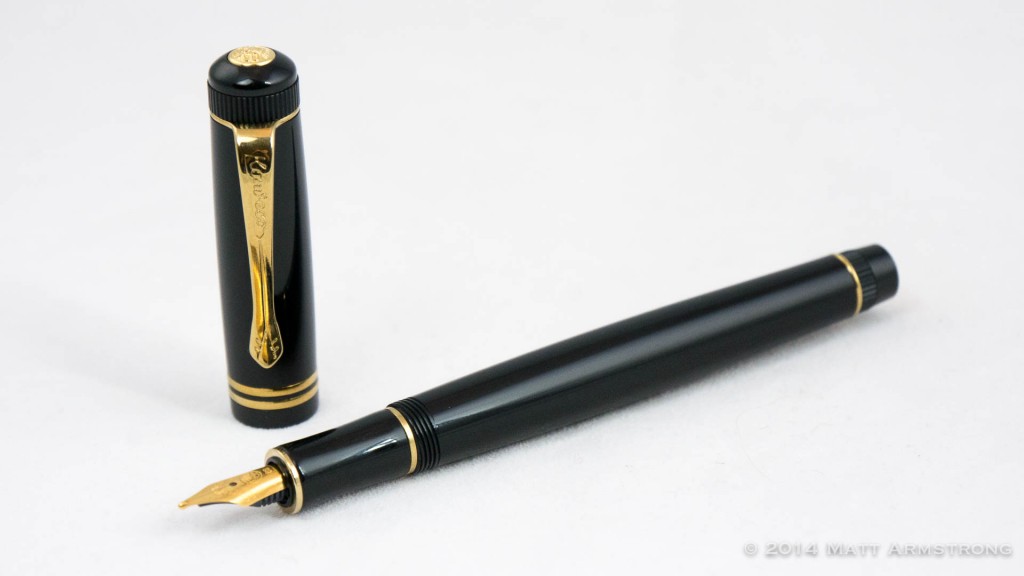 The Dia2 is a lovely pen. It comes in black, with either gold or silver appointments.  The pen is understated and streamlined, but has a vintage, 1930s vibe about it. The acrylic is shiny and perfectly polished to a piano black sheen. The acrylic of the barrel appears to be lined with metal (likely brass), which gives the pen a nice heft balance and heft in the hand. The cap posts very securely, but I find that with the pen’s length and weight of the lining in the barrel, I prefer writing with the pen unposted.

There is a gold-plated logo coin in the finial. The finial features a deep knurling that runs around the diameter, just above the clip ring, which I think is a lovely design element. (Although it could see those grooves becomes a magnet for pocket lint…) It gives the pen a really classic, vintage look. The clip, which is solid brass, has the Kaweco logo and the same art deco-like design on the clip “ball” that I saw on the Allrounder. The base of the cap has a double band.

The pen’s barrel swells in a clean sweep to the center of the pen, and then tapers down slightly to the end, where there is another small brass ring, a bit more of that unique knurling, and a flat bottom with ever-so-slightly rounded edges. The section, which is also acrylic, has a gentle concave sweep to it.

In terms of construction quality, I am singularly impressed. The whole pen feels solid. Some pens feel delicate or flimsy, as though you need to baby them through their lives. This is not one of those pens. It feels built like a tank, but with the precision and attention to detail I am used to seeing from most German or Japanese pens. The threads are smooth, with very little slack. The polish on the pen is perfect, and the pieces are assembled precisely.

The pen is a cartridge/converter pen, and uses standard international cartridges or converters. It can use either long or short cartridges. From what I’ve been able to discover online, the pen comes with a single short cartridge, and does not come with a converter. I received a review unit, which did have a converter, so what I received may not be indicative of what actually comes with the pen. If you’re a regular user of fountain pens, this probably isn’t a huge issue, as you’ve likely got converters floating all over the place. Nevertheless, I would very highly encourage Kaweco to begin including one in the box. For a pen that retails at $125, the lack of a converter is really inexcusable. If I can get a converter in a $5 pen from China, you can include the $0.03 worth of plastic in a pen costing this much. 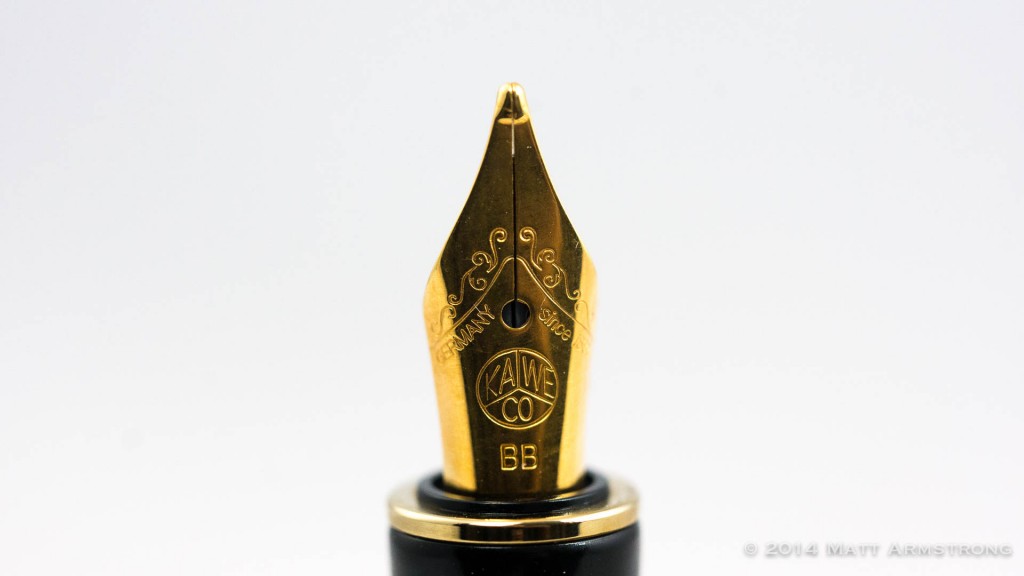 I was able to try two different nibs on this pen. The stock nib, which was a gold-plated steel BB nib, was a lovely writer. I little dry, but very smooth, with just a hint of spring to it. Like the other steel Kaweco nibs I’ve tried, though, the line ran narrower than I would expect for the size designation on the nib. You can see from the image above that the tines of this particular nib are quite close together. Thank goodness that the polish on this nib is so wonderful. Even with the drier flow, the nib wrote quite smoothly.

However, along with the Dia2, Kaweco also included a sample of their new 14k gold nibs units.

Y’all. This changes everything. 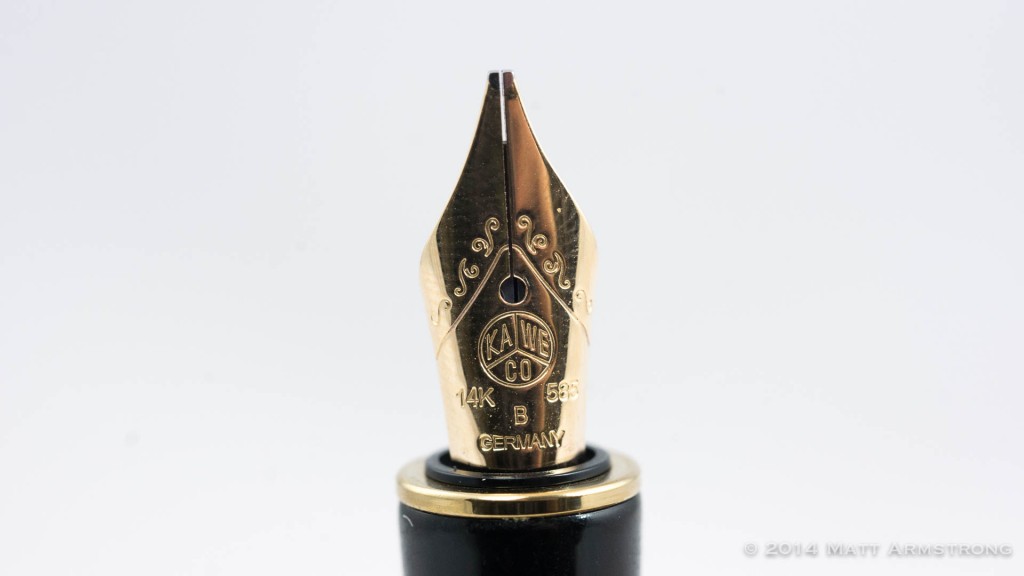 Bock, who makes the nibs for Kaweco pens, apparently decided that they wanted to treat the 14k gold nibs a bit differently than the steel nibs. Now, I like the steel nibs that I’ve tried on Kaweco pens. Even the extra fine (which is something I’d never buy for myself) was a very nice nib. But these new 14k nibs take Kaweco pens to a whole new level. And, when you slip one of these babies on a Dia2, you took what was a very nice pen and turned it into a KILLER pen. 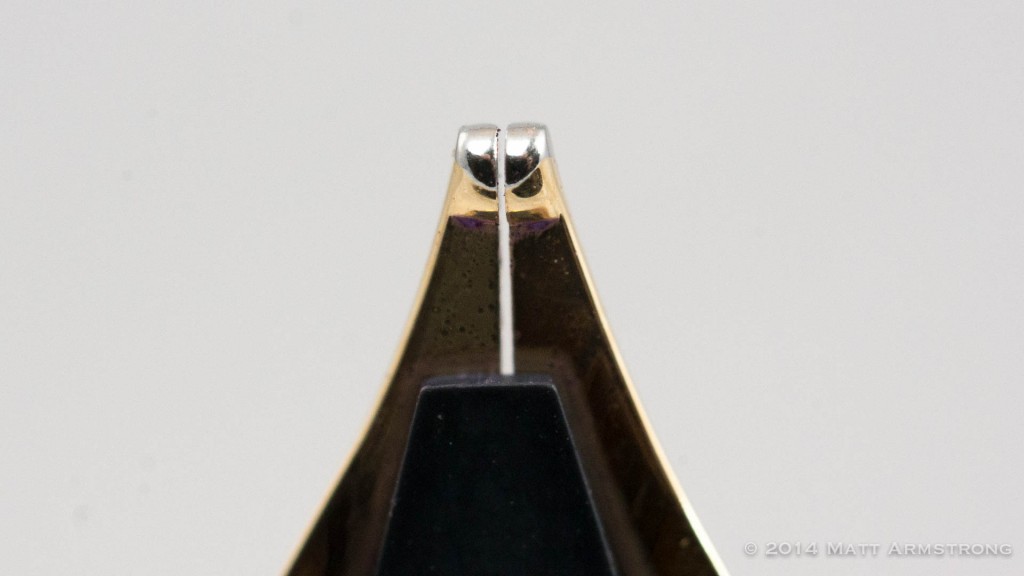 You can see an example of this in the video, but the Broad 14k nib writes with a significantly wetter and wider line than the Double-Broad steel nib. And, when you look at the closeup of the nib tip on this new nib, you can see why. For starters, while they call this a broad nib, it’s really more like a broad stub. It’s perfectly polished. And, you can see that the slit on the gold nib is significantly wider than the slit on the steel nib.

The new Kaweco 14k nib is a really special nib. I had a couple of issues with hard starts, but discovered that most of that was due to my rotating the pen too much when I write, which is a bad habit of mine. Being so stubbish, this pen is a bit more particular about its sweet spot than a truly round nib. Despite that, about 30 seconds after slipping it into the pen, I knew I needed one in my collection. And chances are it will be this 14k broad nib in a Dia2. The combination of pen and nib makes this worth the cost to me. It’s a spectaular writer. It’s comfortable in the hand. It’s classic, yet modern and clean. It’s understated without being YET another boring black and gold cigar-shaped pen. It’s beautifully made, feels solid in the hand, and writes like a dream. What more could you ask for?