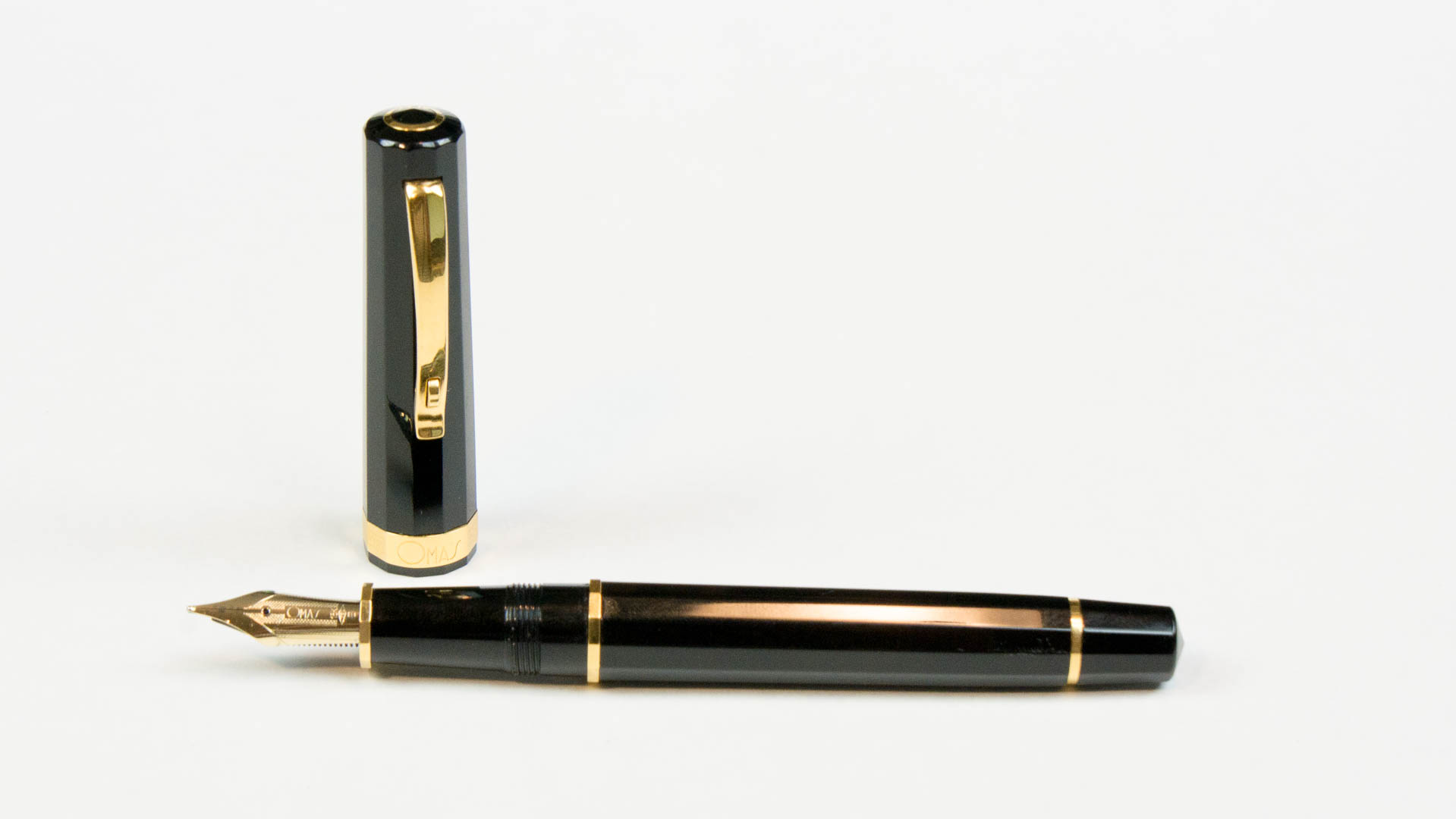 I have been a fan of OMAS pens since my first entry to the brand early in my collecting days, when I purchased my OMAS Notti di Bologna (still in regular rotation). Since then, I have acquired a couple more OMAS pens, and the Italian brand has been one to which I regularly turn when searching for a new high-end pen to add to my collection.

The OMAS Milord is part of the company’s Arte Italiana series, and comes in a few regular flavors (Black, Maroon, and “London Smoke” grey, plus their well-known Brown Arco celluloid). The model also comes in a whole variety of limited editions. The pens can be fitted with a rigid 18k nib in EF, F, M, B, or EB. OMAS also offers 14k Extra Flessibile nibs in EF, F, or M.  Many of the models come in either Gold or silver-color “Hi-Tech” trim. 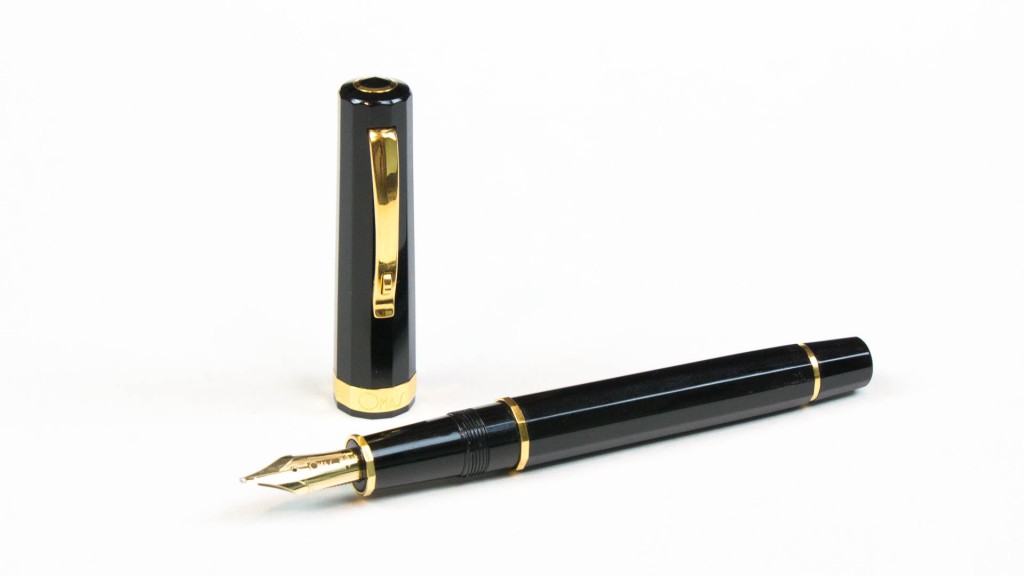 The black Milord lent to me for this review (Thanks, Rob!) is made out of OMAS’ “Cotton Resin,” which is manufactured from the seeds of the cotton plant. I can’t tell you the specifics of how the cotton resin differs from any other resins available in the pen world, but it is a term that OMAS’ marketing department throws around a lot, so it must mean something to them. It, apparently, is difficult to manufacture, and can take over a year to complete a single batch.

The Milord’s design centers around its 12-sided cap and barrel. The top of the cap tapers to a point, and the top of the cap is inlaid with a perfectly round gold ring. The clip, which is extremely stiff, features a graceful, swooping curve and a roller wheel which servers as the “ball” of the clip. At the base of the cap there is a wide gold band which follows the 12-sided design, and has a Greek key design engraved. 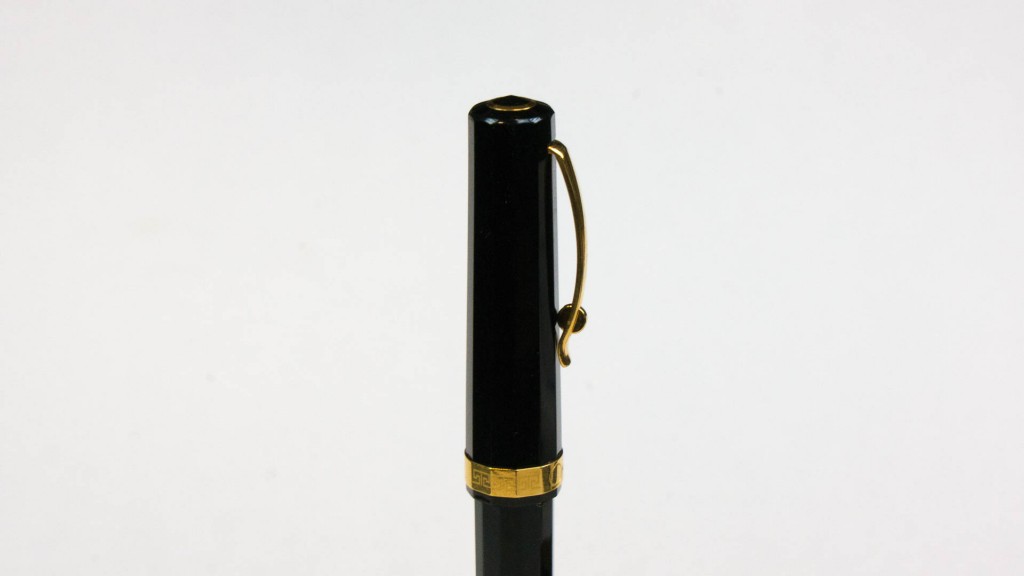 The pen’s 12-sided barrel also tapers slightly toward the pen’s finial, and is broken up with two gold washers.

Under the cap, the section tapers toward another gold-colored, 12-sided washer at the very end of the section. In what is a fairly common (yet strangely baffling) design for OMAS pens, the cap’s threads sit smack dab in the middle of the section. This generally shouldn’t be a big issue if you tend to hold your pens close to the nib on the section. But if, like me, you hold the pen a bit further back, you may find yourself holding the threads. Fortunately, the threads are not very sharp, so it’s not uncomfortable to hold the pen on the threads if you do.

The pen feels well-made and solidly built, with one exception. On this edition of the Milord, the barrel finial twists freely, as though this pen utilized a piston-filler mechanism, rather than the standard international cartridge/converter system it actually uses. In fact, I was able to unscrew and remove the finial completely before I realized that I wasn’t actually inking up the pen. I suspect the reason for this is that some versions (especially the Brown Arco and limited editions) of this pen actually do come with as piston fillers, and they wanted to make the design a bit more flexible. It’s a minor thing, but for the C/C versions of the Milord, I wish they’d shellac the barrel finial in place. It just feels cheap to have the finial screw all the way off. Of course, now that I know it isn’t a piston filler, I wouldn’t often be fiddling around with the end finial… 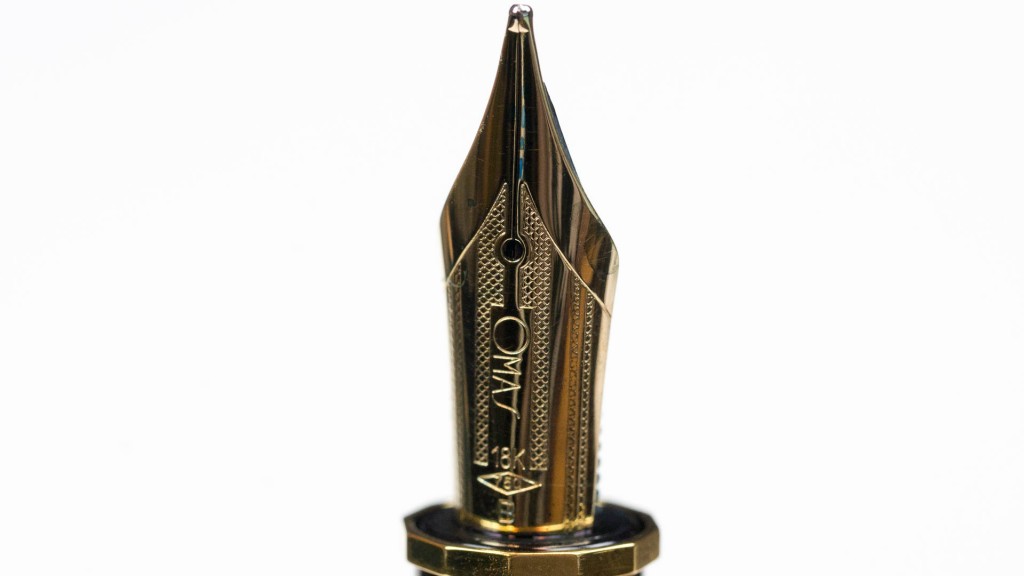 The broad 18k nib that came with the pen is large and attractively engraved. It is quite a rigid nib, and lays down a very broad line, even for an Italian pen (1mm, according to the OMAS website). Unlike nearly every other OMAS nib I have tried prior to this one, the nib on this Milord had some issues. The nib is quite sooth, and doesn’t display any signs of “baby’s bottom,” even under magnification. But on close inspection, it appears that the grind on the nib was not quite round. The nib’s foot has very slight edges which appear to result in a slightly problematic sweet spot. Add to that an inkflow that runs on the dry side, and I found I was getting minor, yet frequent (and annoying), skipping and hard starts. This problem was exacerbated somewhat with certain, drier-running inks.

In the course of writing the first draft of this review, I also found that I had to prime the feed a couple of times to keep up with my pages of faster writing. Were this my pen, I would disassemble it, give it a very thorough cleaning, and attempt to open up the tines of the nib just a touch to increase the ink flow. If that increased ink flow didn’t help eliminate the skipping and hard starts, I would probably do a bit of smoothing and polishing to round out the nib just a touch.

(Although I note this in my video review, I also wanted to mention it here as well: this pen was purchased used, so I am unclear as to whether these issues are due to the manufacture of the pen rather than the previous owner. Having three other OMAS pens in my collection, none of which behave this way, I suspect it’s probably a combination of both.)

As for the in-the-hand writing experience, the Milord is a mostly-comfortable pen to hold. I am able to write with it unposted or posted without any issue. When posted, I find it a bit longer than I normally like, but at no point did it feel unbalanced or back-heavy. Due, in part, to the fact that the ink flow wasn’t as consistent as I would like, I occassionally found myself death-gripping the pen or applying more downward pressure than I normally would when writing with a fountain pen. (It is, unfortunately, one of my automatic reactions to a fountain pen with a drier ink flow.) That death grip did cause my hand and wrist to cramp up a bit on long writing sessions.

Overall, the design of the multi-faceted Milord is nice, and I like the clip design as well. Personally, I prefer the sleeker design of the OMAS Ogiva to the more ornate profile of the Milord. I’m just not quite as enamored with the Milord design, but I do still like it a lot. Assuming that the nib problems are specific to this pen and not a problem with all Milords, this is a pen that I would probably consider adding to my collection. Especially in one of the more interesting finishes.