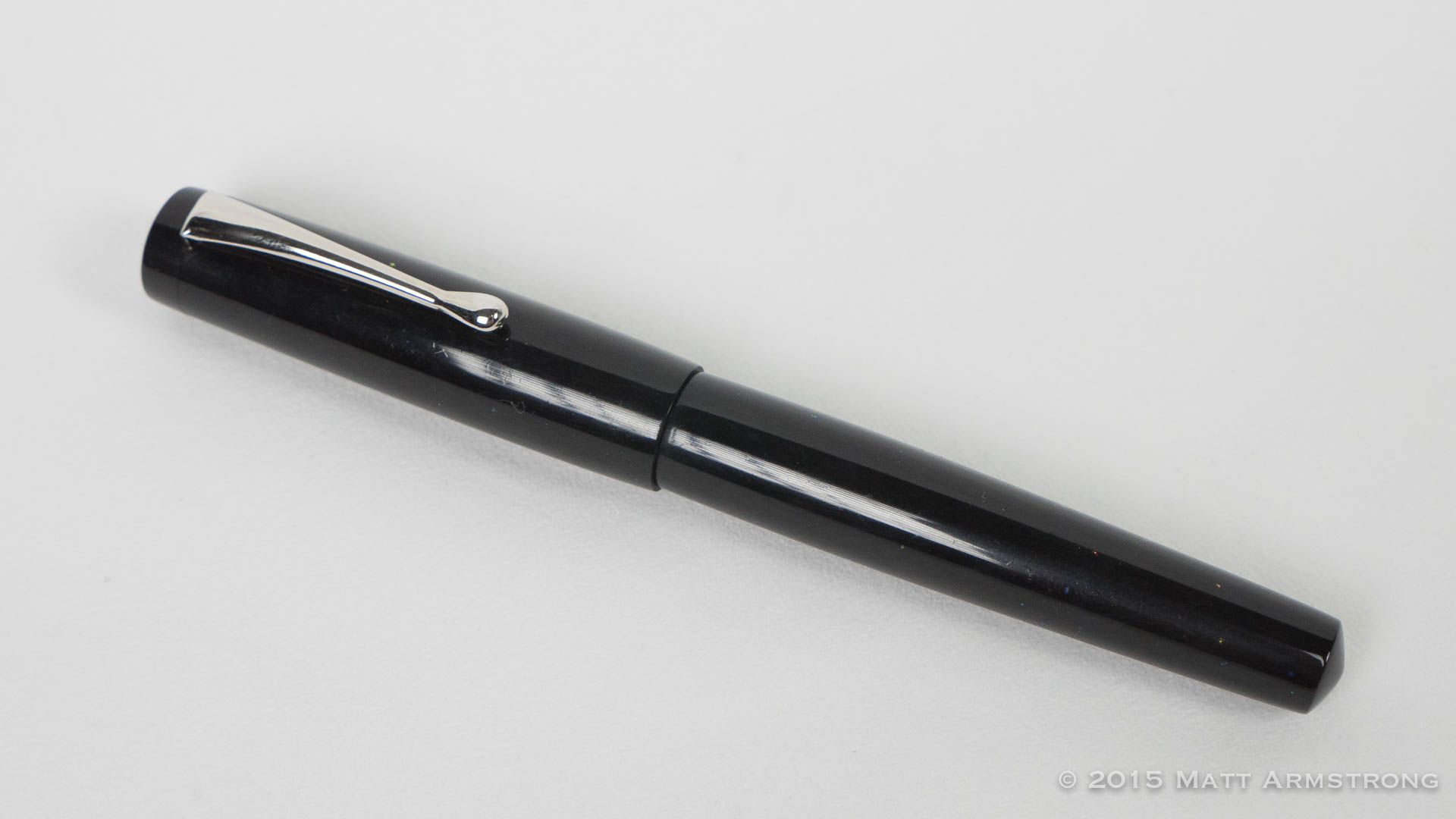 The pen for this review was loaned to me by Pen Habit viewer, Rob, and was returned to him after the review was recorded.

As I have mentioned earlier, Season 3 is the season of custom pens. I have a small selection of custom-made, artisan-made pens to review this season, and it is my hope that, by going through several custom pens this season, you can get a sense of what to look for in a custom-made pen, what to ask for when ordering a custom pen, and what to expect when your custom pen arrives.

The Carolina Pen Company is a one-man operation run by Jonathan Brooks based out of South Carolina. This pen, the Charleston model, was sent to me for review purposes by Pen Habit viewer, Rob back in July.  I did a review and sent it back along to Rob shortly before I took off to the DC pen show in August, where I was able to meet and interact with Jonathan in person. Besides being a talented pen turner, Jonathan is also a really nice guy in person, and he was able to tell me a fair bit about this Charleston that he made for Rob.

The Charleston is a relatively understated design. The cap features a slightly domed/pointed finial and a cap body that has only a very slight swell to it. The pen’s single-piece barrel tapers down toward another blunted point at the end. It is a streamlined and graceful look, but one not entirely unlike many other designs out there on the market. Removing the cap shows a very long, very slightly concave section. There is basically no step-up between the section and the barrel. Combined with the long section, the design of this pen gives the user a lot of different possible grip locations to get comfortable.

The threads on this particular pen are interesting. Jonathan can, per customer request, make the final quarter turn to close or open the cap extra tight. This results in a pen that requires a touch more force to open and tighten close, but that is significantly less likely to come unscrewed in your shirt or pants pocket.

One of the things that makes Jonathan’s pens a bit different from those of other penmakers is that Jonathan also plays around with making his own pen blanks and turning materials. So ordering a pen from him can result in, not only a custom pen, but a custom material as well. The material of this Charleston is called “Opal Starlight,” and is a deep black with barely perceptible swirls of dark blue-grey and sprinkled throughout with little “opal” flakes which look like stars against the dark background. It is a material that looks black from a moderate distance, but up close, contains a lot more interest. Great for someone who wants something a bit more eye-catching than your traditional black pen. Unfortunately, the opal flakes are no longer being manufactured, so this exact material is no longer available (at least until Jonathan is able to find another supplier).

The construction quality of the pen is very good. It’s turned nicely. The threads are smooth and tight. The extra-tight final quarter-turn is a neat feature. The pen is polished well. (A note: my macro lens did turn up some micro-scratches. I didn’t notice them with the naked eye. However, surprising number of people email me, complaining about micro-scratches, so if you’re someone who freaks out about that, you may want to be aware and/or ask for a super-glossy polish.)

The Carolina Pen Company Charleston is also quite a superb writer. The base model of the Charleston comes with a steel nib, but you can upgrade to a titanium or gold nib for an additional fee. Rob opted for the titanium nib upgrade, and this Charleston came with a Bock “Titan” titanium nib. If you’re not familiar with Ti nibs, you might be taken aback by its “unfinished” appearance or the nib’s feedback. Ti nibs can also be a bit more difficult to adjust. Jonathan informed me that he had to spend a fair bit of time working on the nib getting it to where he and Rob wanted it. Whatever he did, he did brilliantly. This nib was Mary Poppins: Practically perfect in every way. It had a nice bounce, without providing a ton of line variation. That extra bounce helps with putting just a touch of extra ink down on the down strokes, so your highly shading inks will be living their best lives in this pen. There was no ink starvation, no hard starts, no skipping; there was nothing but easy flowing writing.

As for price, I’m not trying to be obstinate, but you’ll really have to reach out to Carolina Pen Company and work out prices with Jonathan directly. Prices start at $175, but go up depending on nibs, materials, customizations, etc. I would probably not opt for the Opal Starlight material personally, but with a different material, I would have absolutely no qualms with spending double that amount for a pen like this: especially if I could get it with a titanium nib that writes as well as this one does.