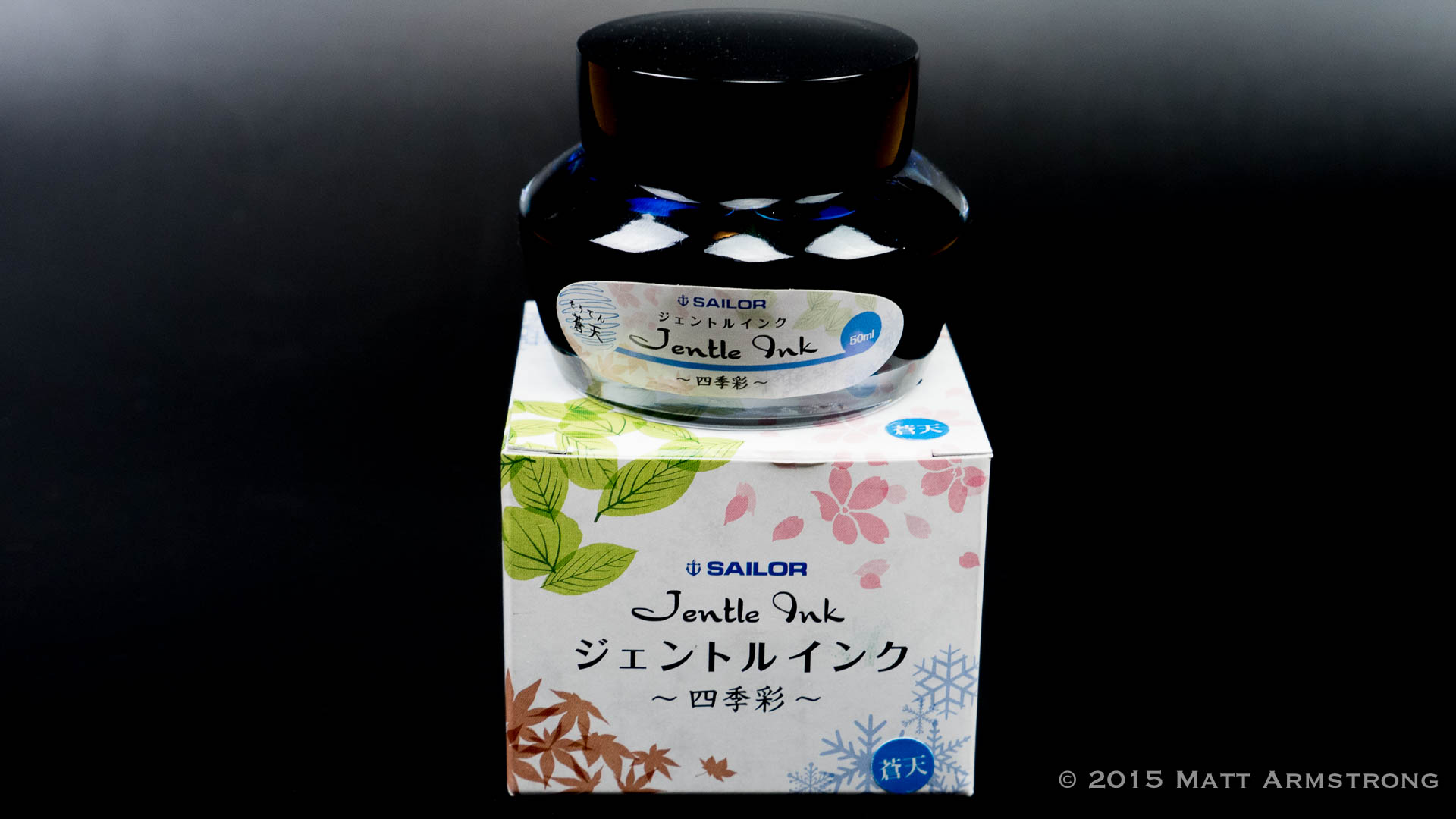 I have this love/hate relationship with blue inks. On one hand, blue ink is boring. It’s one of the two “required” colors (blue or black) that someone, somewhere decided were the only ones appropriate for business usage. Everyone uses blue ink. Half of the Bic ballpoints in the world have blue ink. It is why, when I reach for a new ink, blue is rarely the color I choose.

On the other hand, blue is, on its own, a really beautiful color. If done well, you can find a blue ink with personality and life, something that pops off the page a little bit. I have a LOT of straight-up blue inks in my collection, but there are a very select few that I find myself returning to over and over again–usually because they have some special property that makes them stand out for me. Pilot Iroshizuku Kon-Peki and Pelikan Edelstein Topaz are two blues I find myself using over and over again. 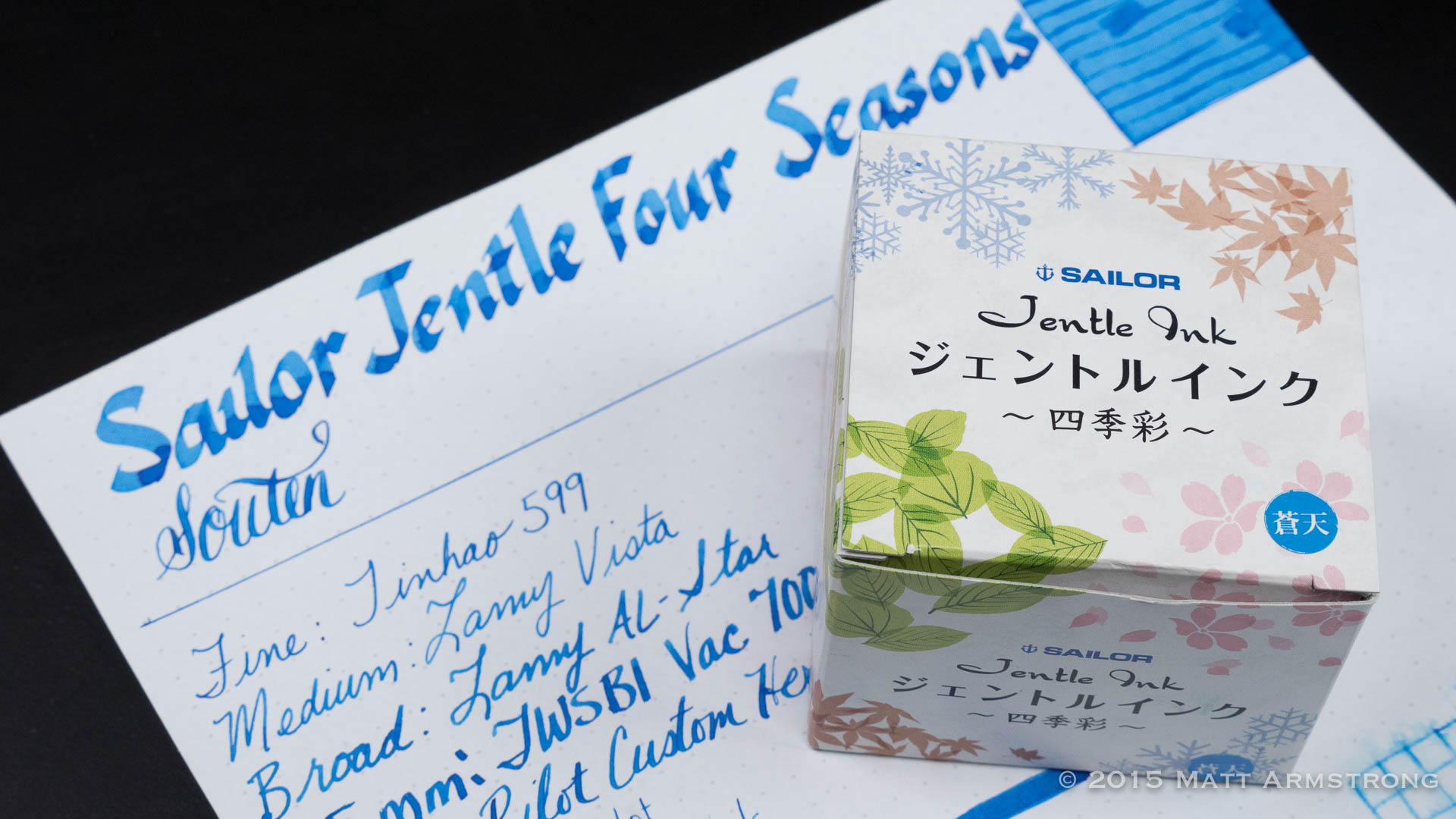 Like its Edelstein and Iroshizuku cousins, Sailor Jentle Four Season Souten (Azure Sky) is one of those blue inks that is more than just a boring blue. Souten was released a little over a year ago when Sailor discontinued several inks in their “Jentle” line and expanded the line with a smaller sub-collection they called “Four Seasons.” One of those discontinued inks, much loved in the community, was Sailor Jentle Sky High, a bright cerulean/azure ink with a red sheen. When word came down it was being discontinued, lo, there was much weeping and wailing and gnashing of teeth.  Fortunately, when the Four Seasons inks dropped, Souten turned out to be an excellent replacement for the discontinued Sky High. 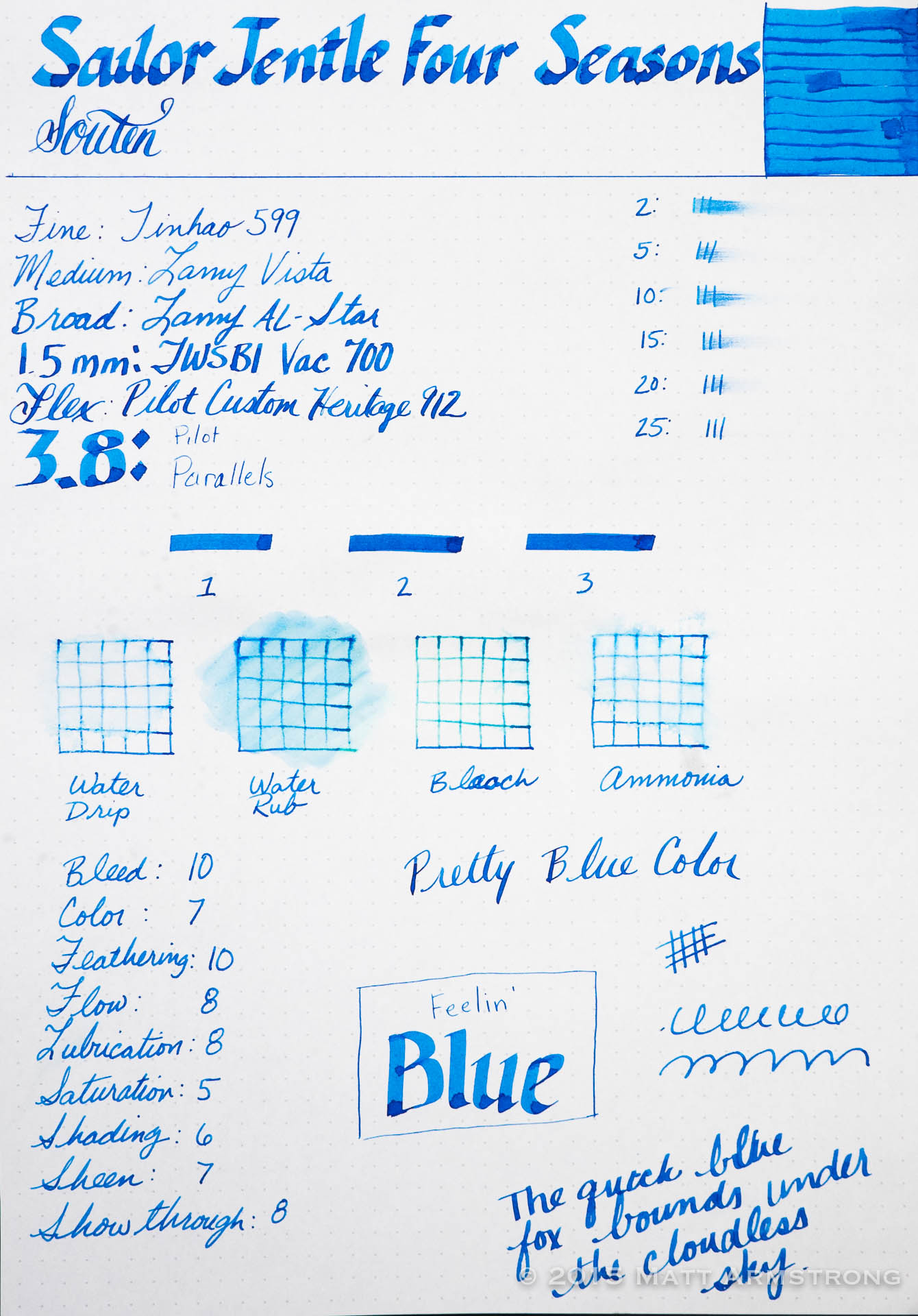 Souten falls into that bright-but-not-too-bright category of blue inks that walks the line between “work appropriate” (assuming you work in a place that cares what color of ink you write with) and still showing some personality. It’s a bright cerulean color, with nice shading, decent dry times, good lubrication, and a great color. 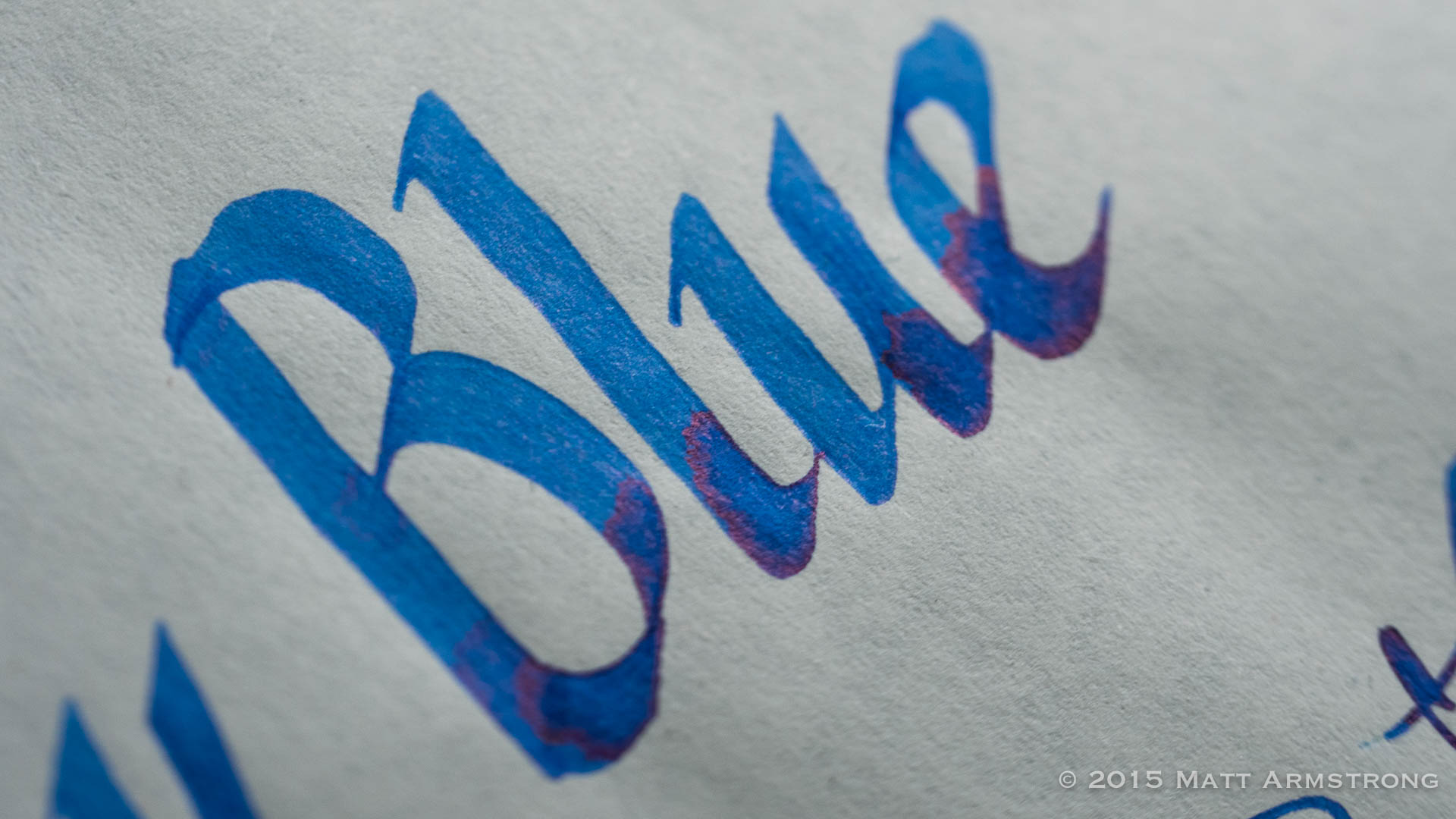 On the right paper, it also shows off a rather fantastic red-purple sheen.

Sailor inks are rather universally known for being excellently-performing inks, featuring good dry times, steady ink flow, nice lubrication, and being easy to clean. I personally have yet to find any Sailor ink that fails to toe this same performance line, Souten included.

Despite this, I think that Sailor inks don’t get enough attention, especially among the new entrants to the Fountain Pen hobby. A big part of this, I believe, is due to Sailors incomprehensible decision to pull their products from the Goulet Pens online store back in 2013. (For the discussion behind that, you can do a google search for Goulet Pens and Sailor Ink and read up.) Since the Goulet site is where so many first-timers get their starting supplies, not as many people start off with these wonderfully-behaved inks. 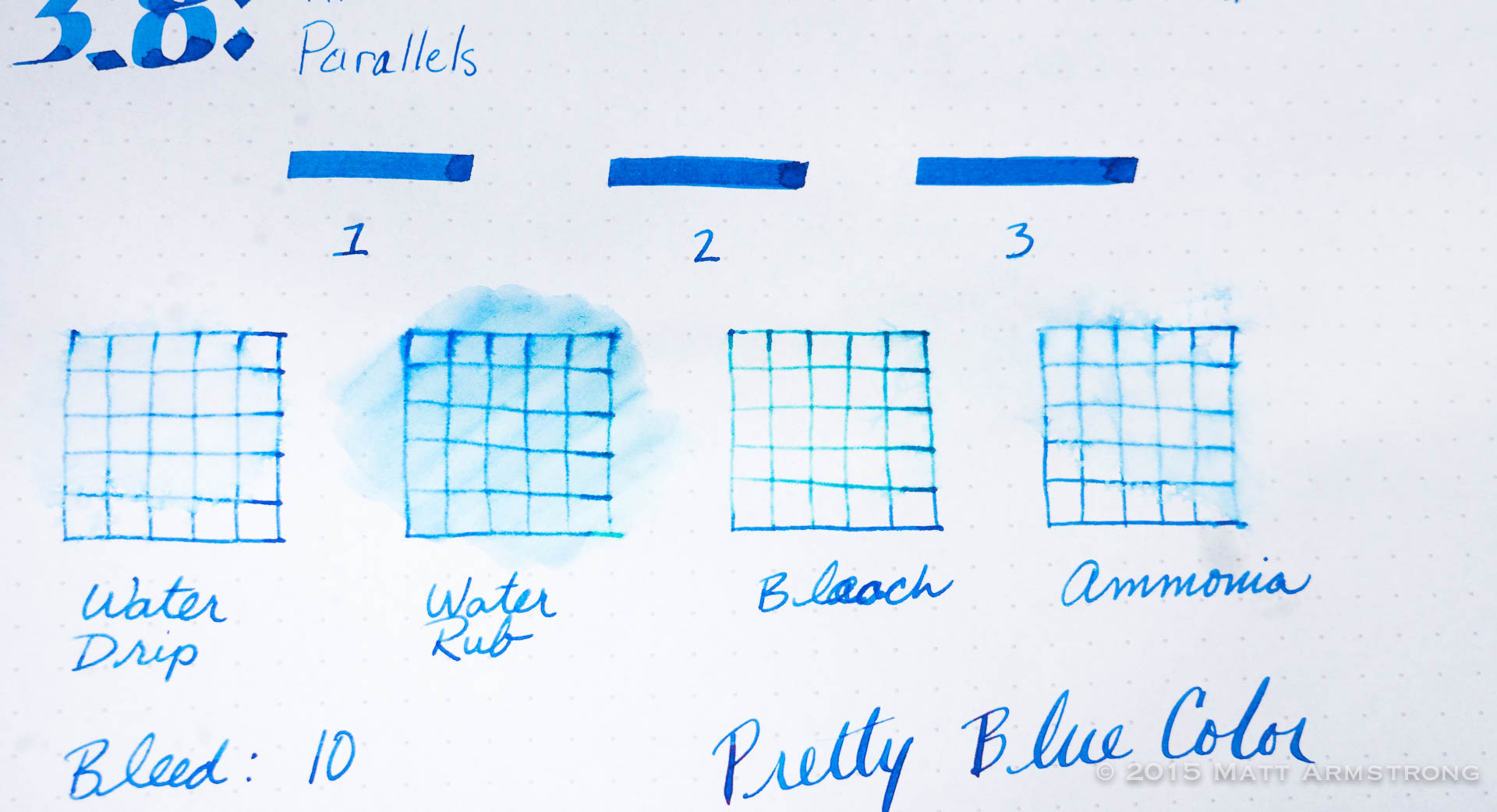 On top of being an overall solid performer, there were a few attributes about Souten that surprised me. The first was water resistance. As you can see from the image above Souten is not fully water resistant, but there is enough resistance that writing can remain legible after exposure to liquid. It even withstands bleach and ammonia. 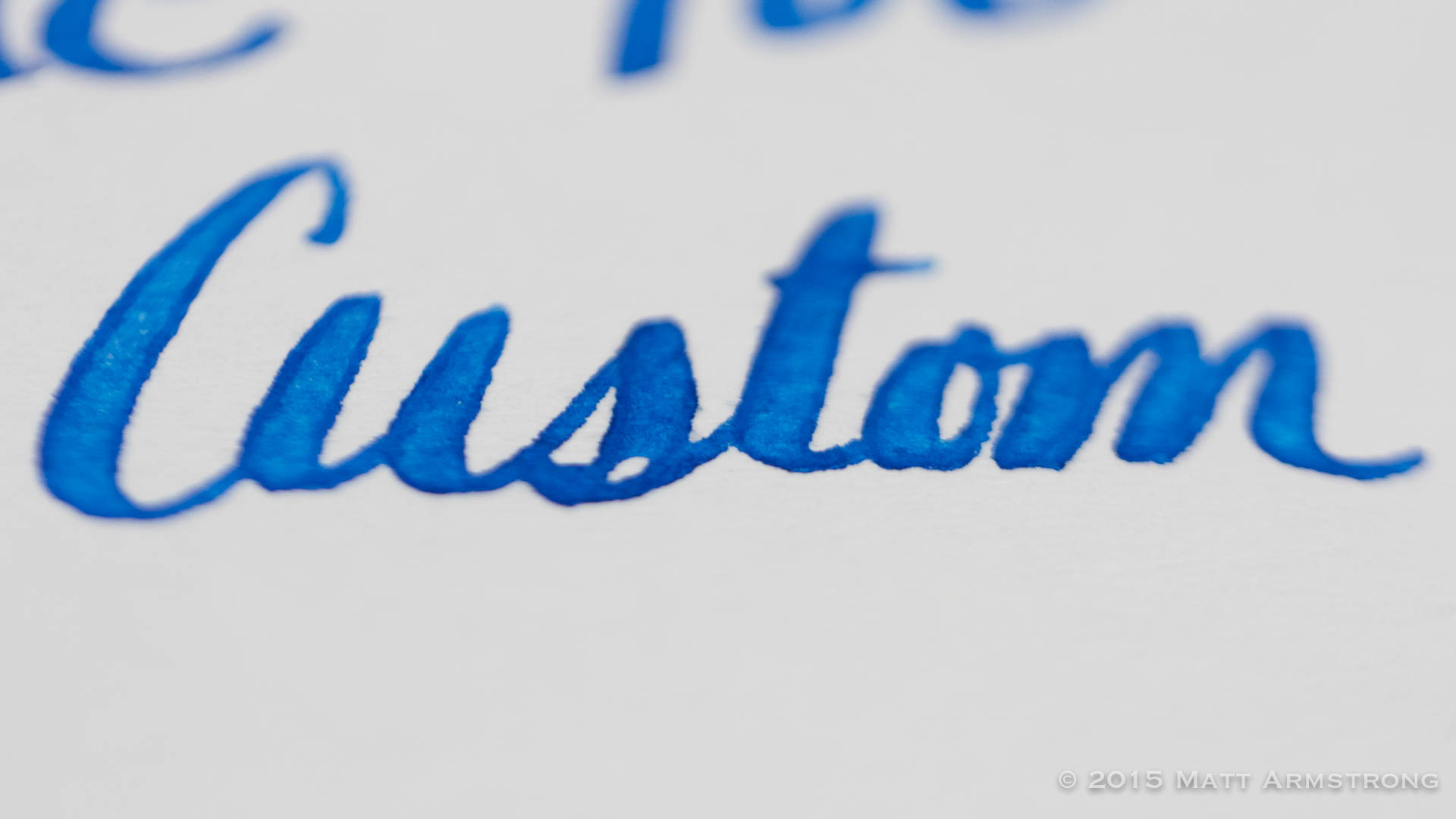 The other thing that surprised me about Souten was how very well it behaved on poor-quality paper. Tackling the dreaded Staples 75gsm Copy Paper resulted in essentially no feathering, even on flex and wide-nibbed writing. On the fine, medium, and broad nibs, there was no bleedthrough at all. On the flat nibs, only minor speckles. It was only on flex writing where bleed became an issue, likely because flex nibs can “cut into” the paper a little bit. 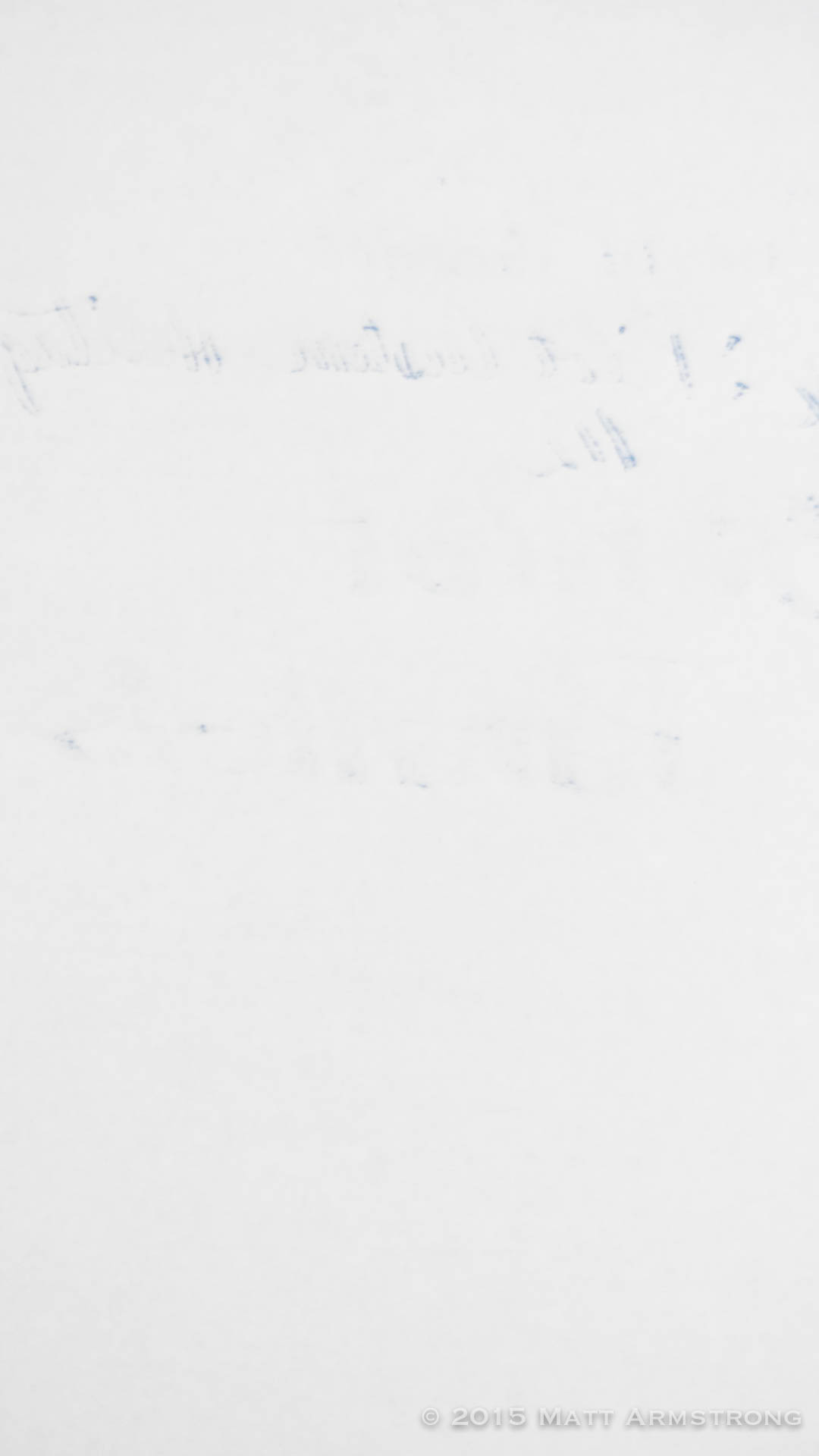 As a blue, Souten has a lot of comparables to pick from, and you can see more examples below. However, some of the closest matches include Iroshizuku Kon-Peki, Edelstein Topaz, and, of course, Souten’s ancestor, Sky High. 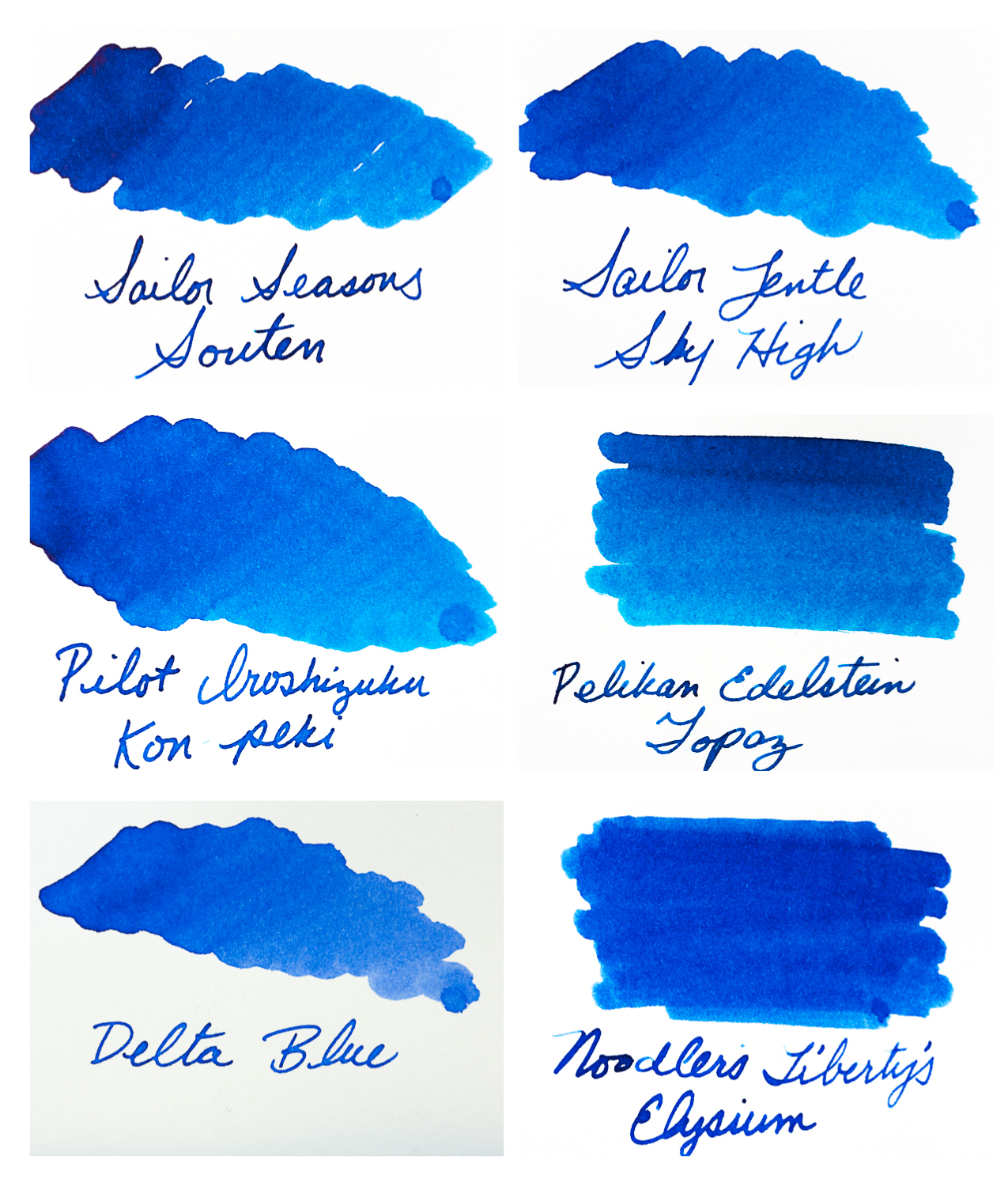 While it doesn’t pertain to the ink directly, I must take a moment to vent a bit about how much I dislike the bottles that Sailor has chosen to use for their inks. Aside from the miserable torture devices that J. Herbin uses to contain their inks, Sailor’s squat, short, wide-mouthed monstrosities are perhaps my least favorite bottle. Sailor has further complicated matters by sticking a little plastic cone in the opening which is supposed to help you fill the pen when the ink level gets low. What happens instead is that it keeps you from being able to fill up any pen with a nib longer than a tiny #5, even when the bottle is full to the brim. The first thing I do with any Sailor ink is to don a pair of latex gloves and remove that stupid little cone over the ink.  In case I’m not clear: I hate these bottles.

Terrible bottle atrocities aside, I’m quite pleased with Sailor Jentle Four Seasons Souten. It’s a superbly-performing ink with a great color, nice shading, and a lovely sheen on the right paper. If anything ever happens to my beloved Topaz, I know I have a very similar ink standing by as understudy.