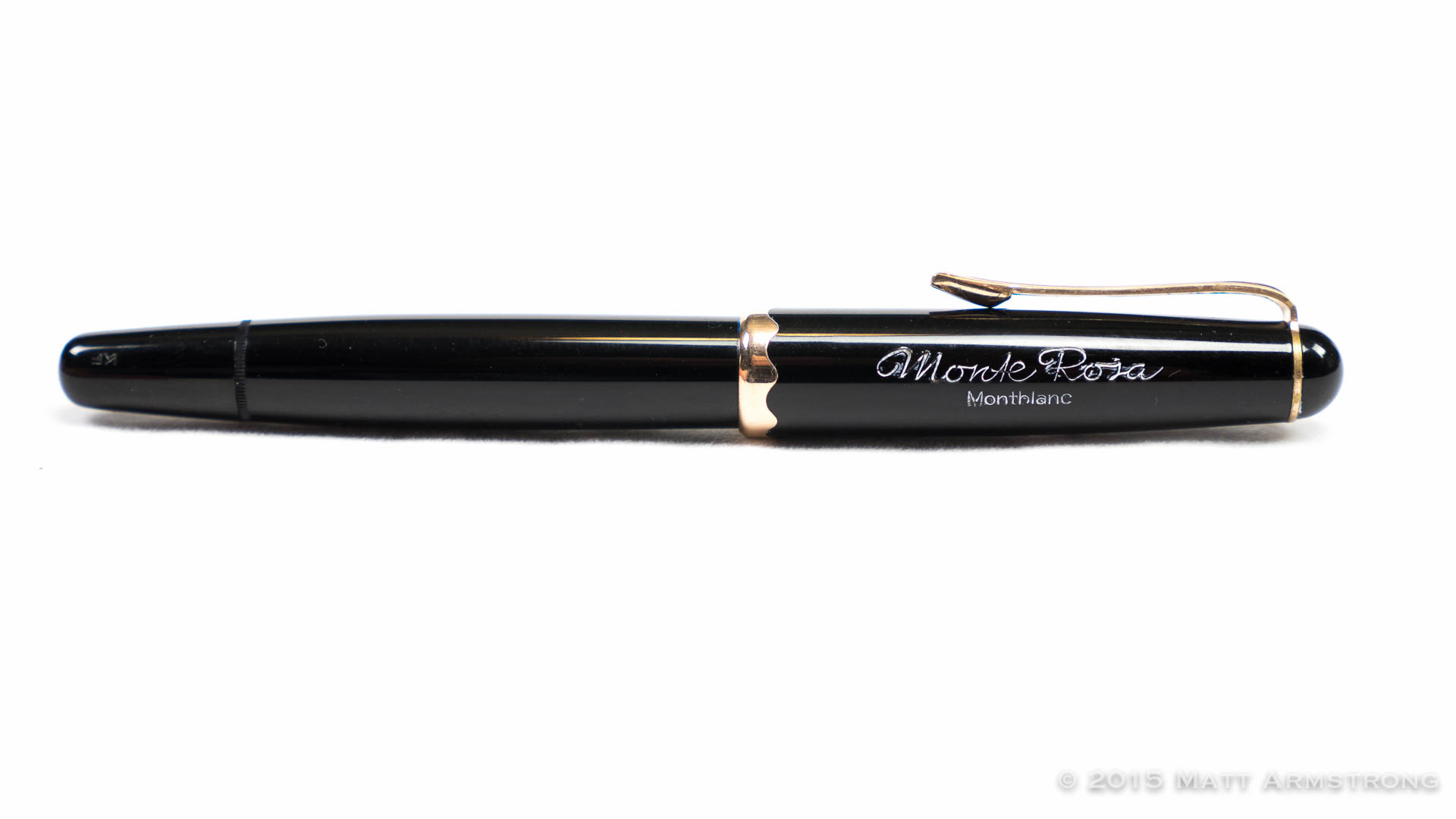 The pens for this review were lent to me by Pen Habit viewer Andres. Andres has two of these vintage pens, which he has been very kind to let me borrow for such an extended period of time (I’ve had them for nearly six months…sorry ‘bout it!)

If you’ve ever wanted to experience Montblanc writing instruments, but still want to be able to feed your children, it may behoove you to take a look at some of Montblanc’s vintage offerings. Prior to the company’s 1977 purchase and subsequent corporate realignment, Montblanc made a wide variety of pens for a wide variety of folks all along the economic spectrum, from school child to robber baron. 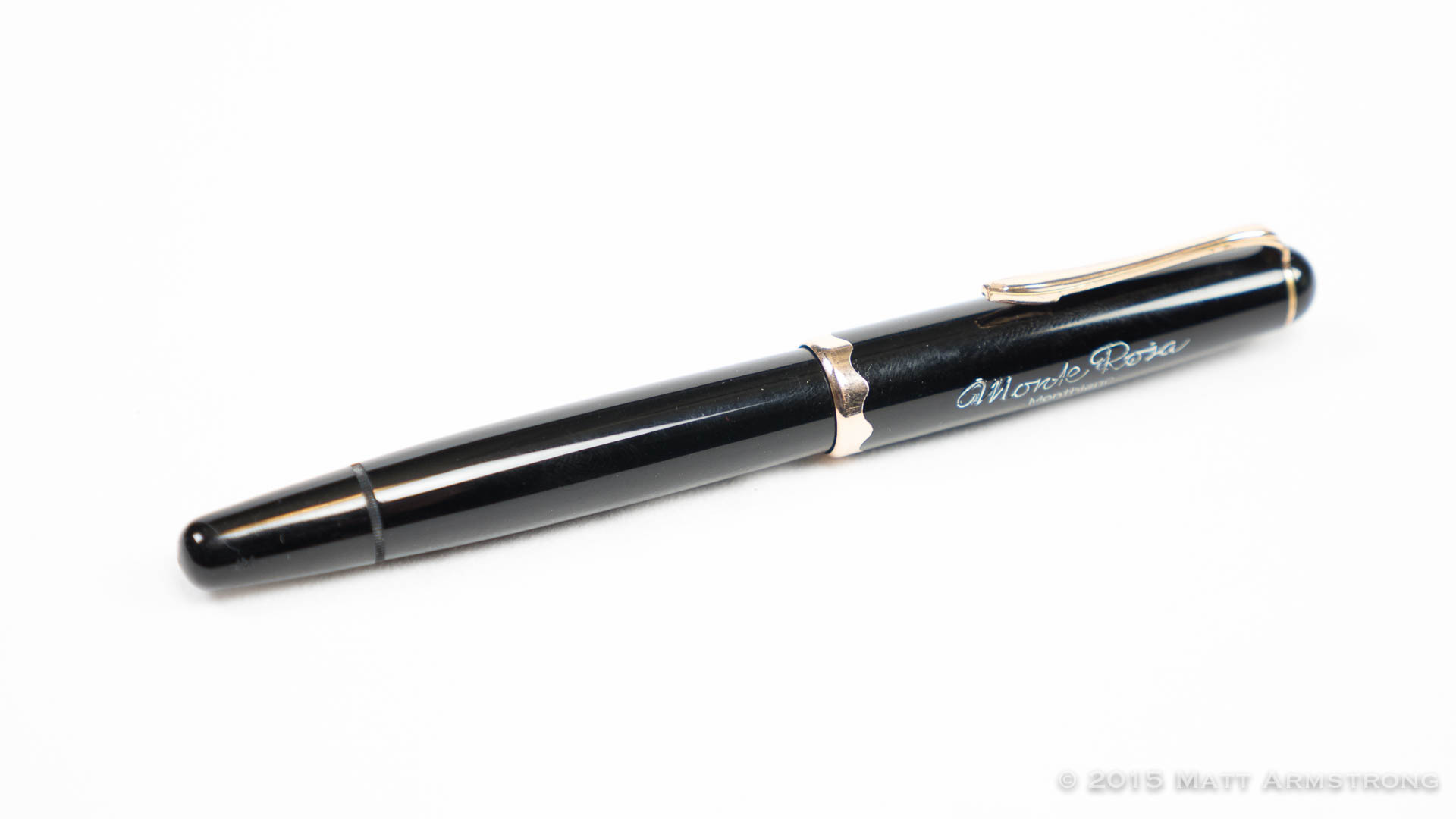 The Monte Rosa 042 is one of Montblanc’s lower-end offerings. It was manufactured from the mid-1950s through 1959 when the model was discontinued. The Monte Rosa was meant to be a student pen, and came in either steel or gold-nibbed varieties (the gold-nibbed was called the 042g). It is a smaller piston filler, made from black acrylic (although it does come in other colors, which are far less common), and can be had even today for quite a reasonable price.

The Monte Rosa is a relatively understated pen and, understandably considering its price, lacks some of the refinement of the higher-end offerings from the company. The pen is a standard cigar-shaped body, with a fairly narrow girth, and is a bit shorter than I generally prefer in my pens. The top of the cap is a small, rounded finial which holds the gold-plated brass clip on the cap. The clip has a nice profile and is springy, but feels a bit on the flimsy side. The base of the cap has a wave-like cap band, which gives the pen a bit of visual flair usually missing from most Montblanc offerings. And, as the cap band covers the lip of the cap, it also provides a bit more structure to the cap, which I’m sure came in handy in the hands of school children. 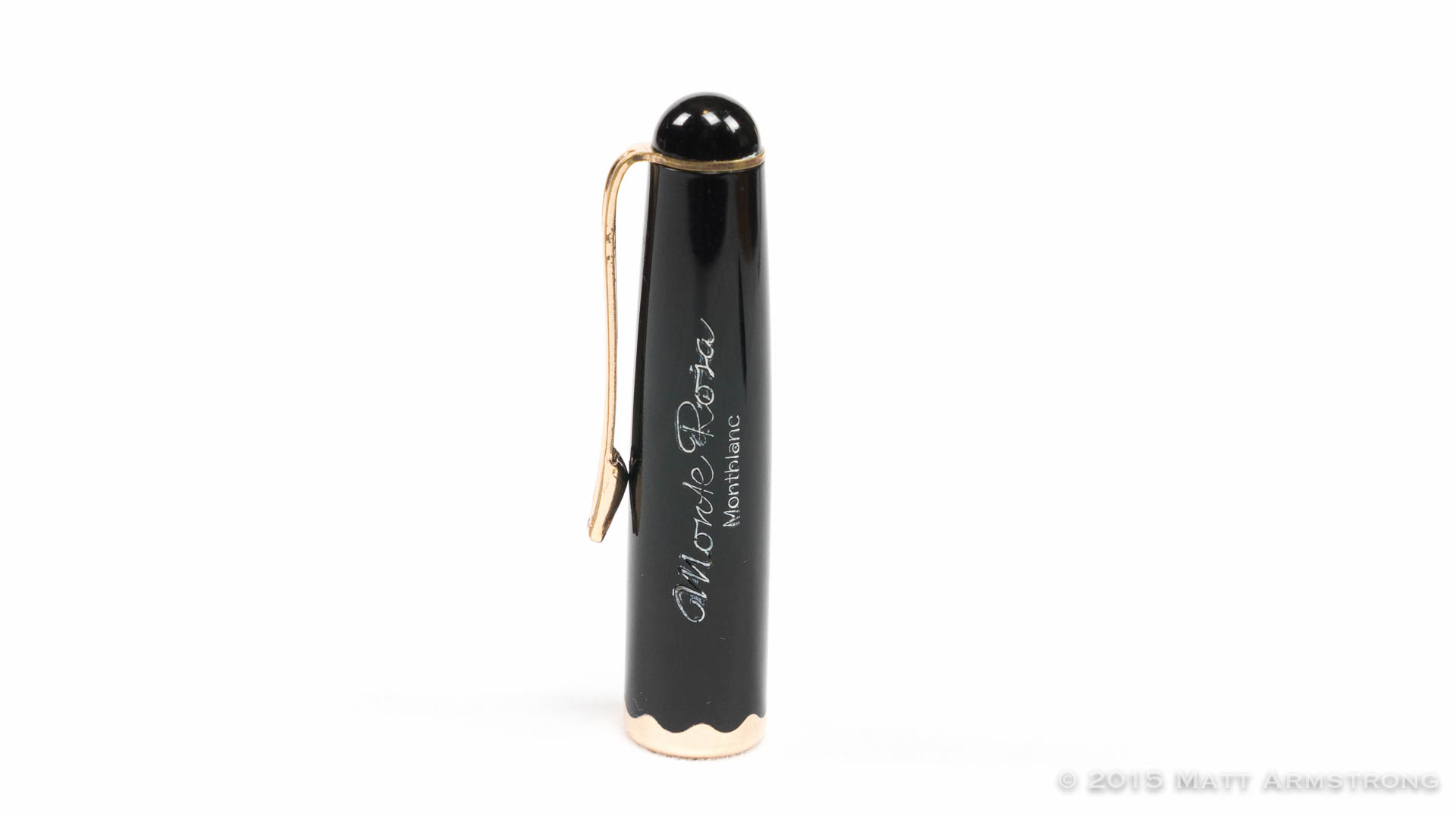 The side of the cap is stamped/engraved with the words Monte Rosa in script and a small san serif Montblanc underneath. There are, apparently several different designs of the cap imprint, which help to determine the age of the pen. The cap attaches to the barrel via very smooth threads, and it takes one and a quarter turn to remove the cap. 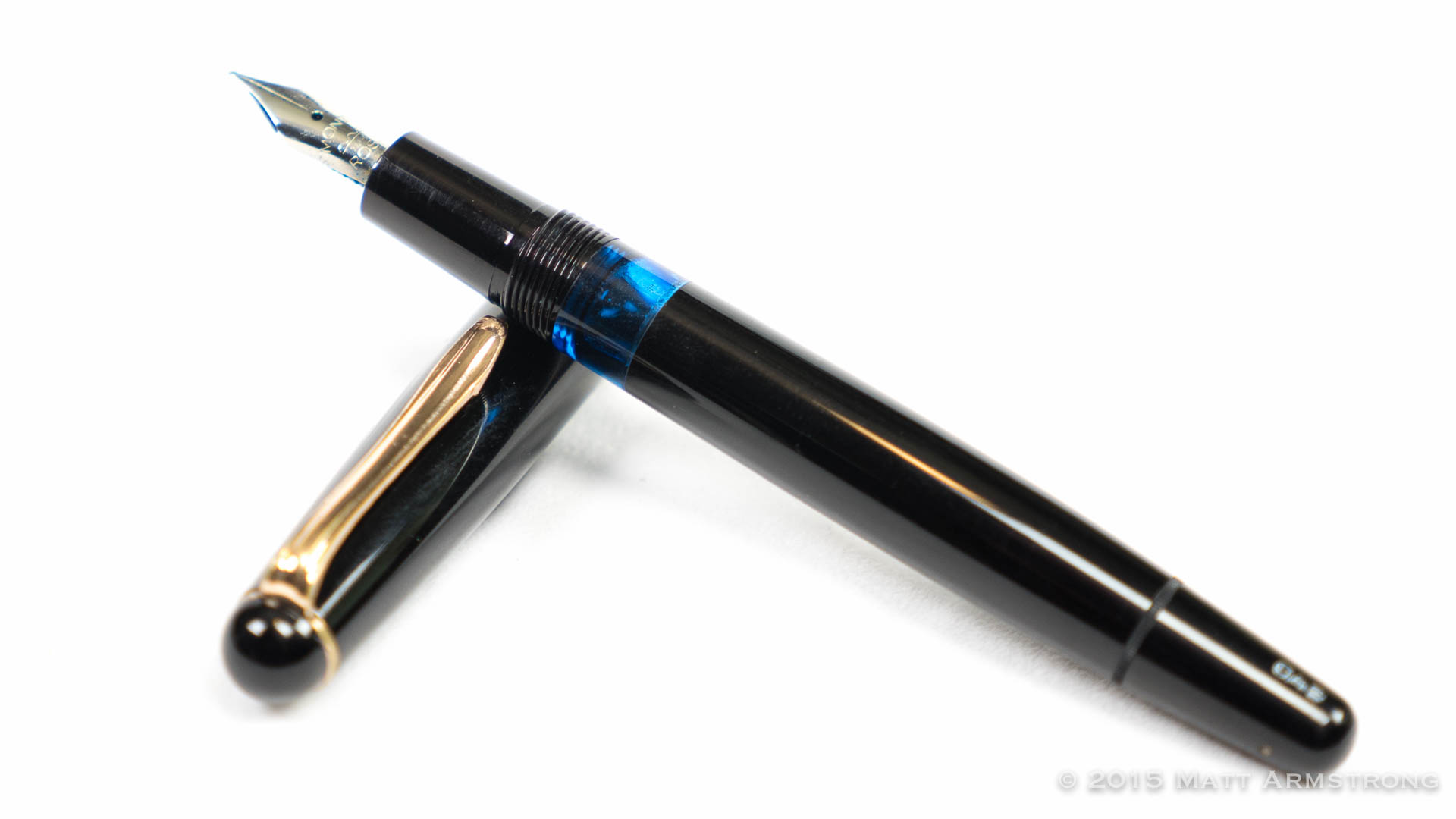 The barrel of the pen tapers down in that traditional shape to a knurled band which separates the piston filler knob from the rest of the barrel. The knob at the end of the pen turns ridiculously smoothly, with absolutely no resistance. The knob turns so freely, in fact, that I have inadvertently twisted the piston knob when I meant to remove the cap. There is so little resistance that at first glance, I thought the piston knob was broken. The filler knob has two marks stamped into it: “042” to indicate the model and another mark to indicate the nib type. (“KF” in the case of this pen…more on that in a moment.)

The filler knob has two marks stamped into it: “042” to indicate the model and another mark to indicate the nib type. (“KF” in the case of this pen…more on that in a moment.) 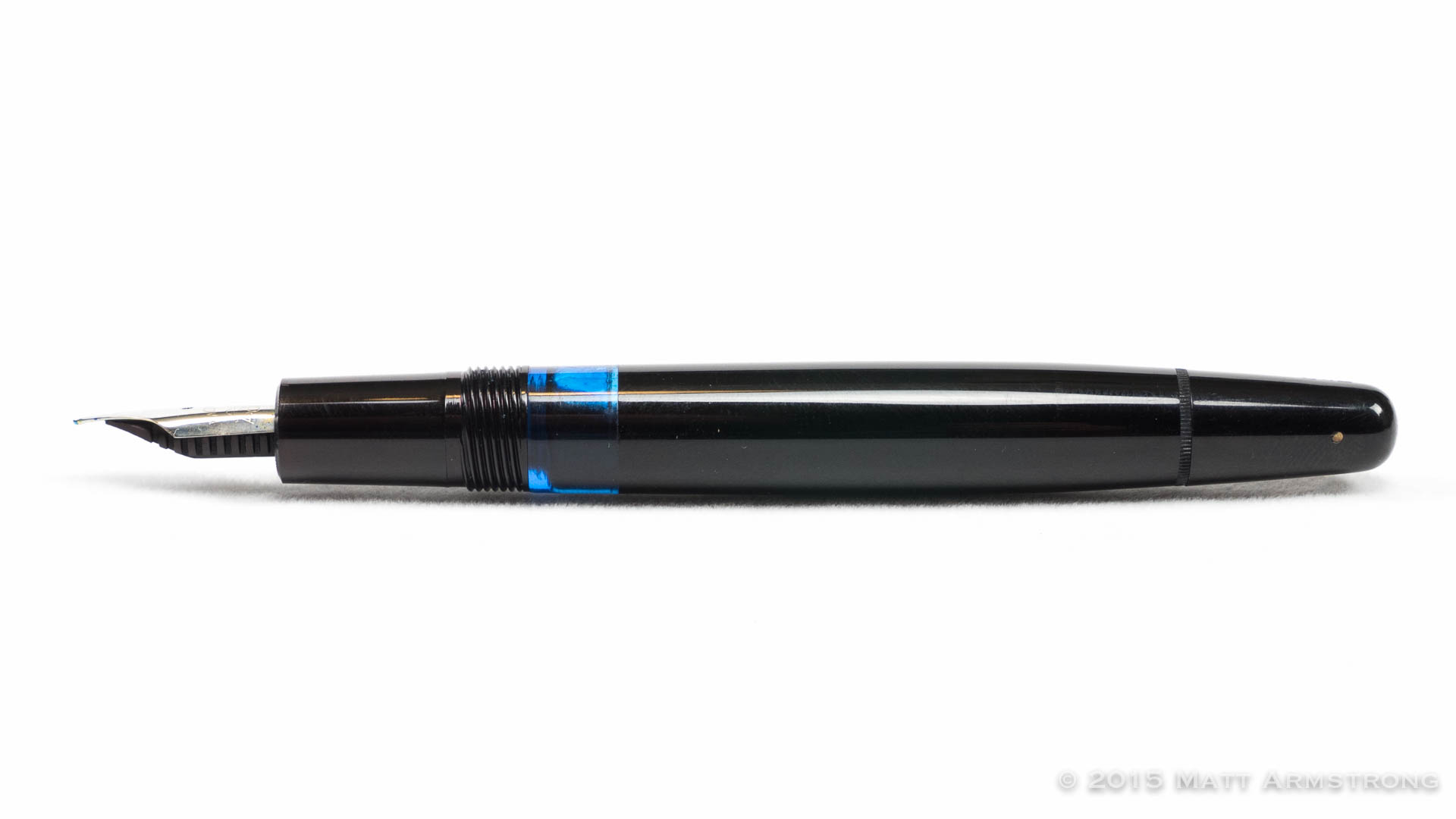 Under the cap, there is a translucent blue plastic ink window which is a nice feature on such an inexpensive piston filler. Below in the ink window are the threads, followed by a very short, slightly tapered section. I find the section far too small to use, and my grip ends up landing on the threads almost every time I pick up this pen. Fortunately, the threads aren’t sharp, and it is possible to slide my grip up above the threads to the barrel so long as the pen is posted. 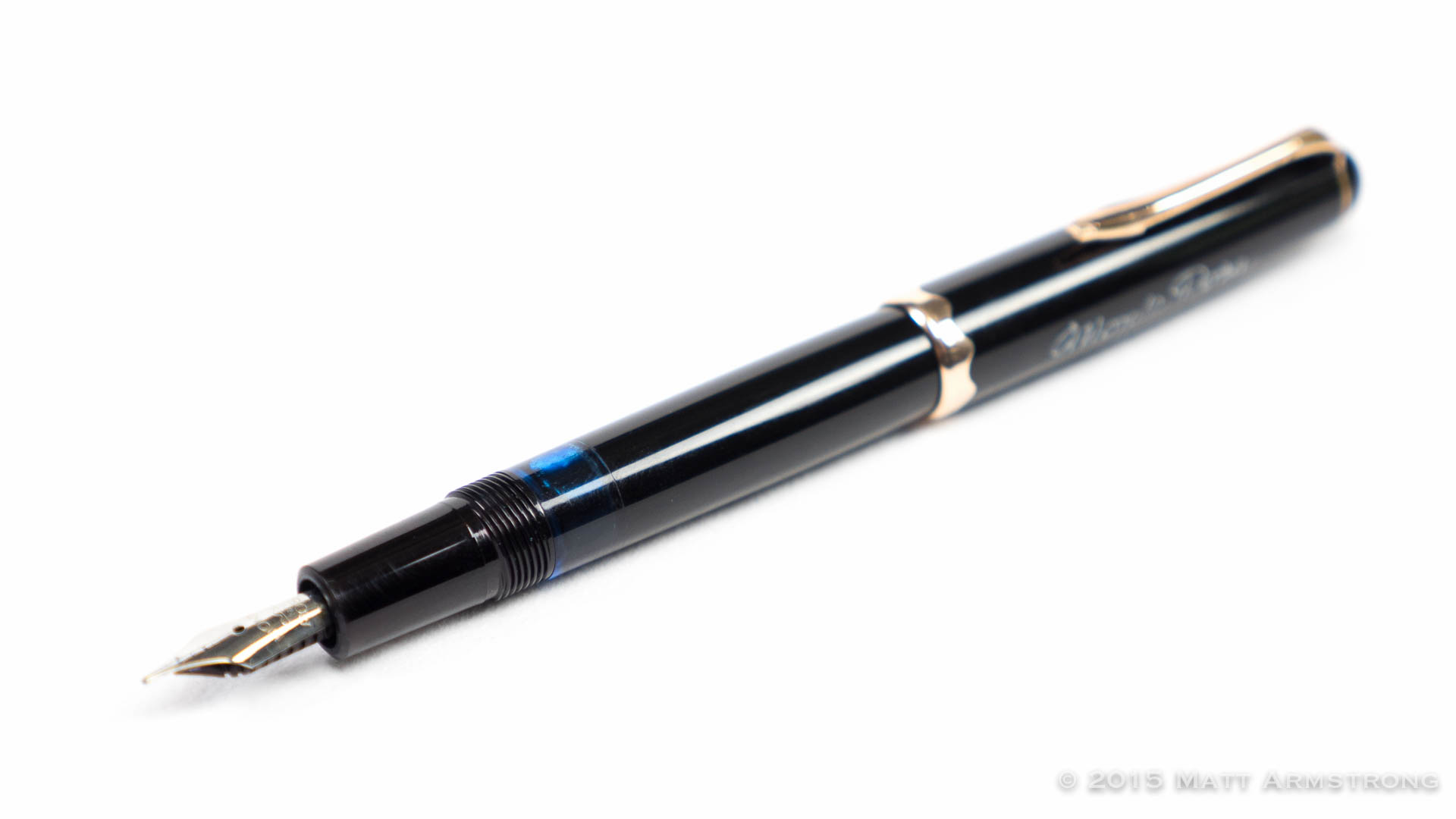 Speaking of posting, this is a pen that I pretty much have to use posted. It’s too short otherwise. Fortunately, the pen posts securely by friction and is nicely balanced when posted. 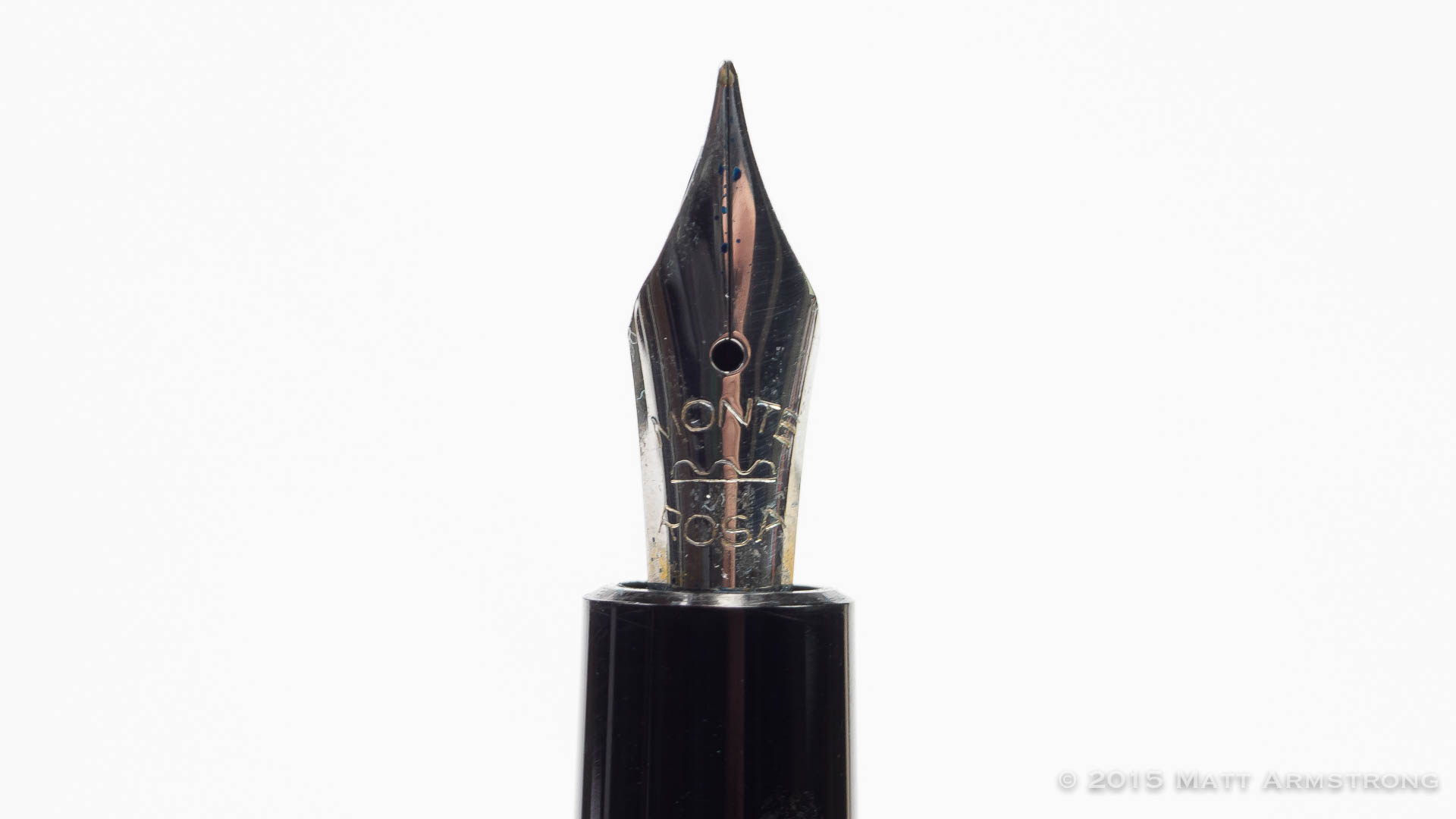 Andres sent me two Monte Rosas to review: one pen with an extra fine nib, and another pen with a “KF” nib, also known as a Kugel Fine nib. I never got around to inking the EF nib (I don’t care for EF nibs), but the KF nib is pretty unusual. A Kugel Fine nib is basically a fine nib with a ball-shaped tip (kugel means ball in German) that is ground to be quite forgiving of the vertical angle at which you hold the pen. Rather than regular nibs which have a little bit of a “foot” on the nib which gives a sweet spot at a 45-60° angle, ball nibs were meant to be used on the go, even writing with the pen perpendicular to the paper. They’re not drastically different from the modern round nib grinds, but different enough that some people don’t care for them.

The Kugel Fine on this Monte Rosa is fascinating nib. It is a steel nib, but it is one of the bounciest, flexiest steel nibs I’ve ever used, and it can get a nice bit of line variation. It is perfectly tuned, very smooth, and nicely wet (for a fine nib). I never had an opportunity to write with the pen at a 90° angle or anything like that, but I can say that I enjoyed writing with the pen quite a lot. It’s a pretty fantastic writer.

Overall, I was rather impressed by the Montblanc Monte Rosa 042. The quality and care with which Montblanc built what was, ostensibly, a student pen is impressive. (Particularly in light of some modern manufacturers whose low-end fountain pens are barely usable.) The design and materials are not terribly exciting, but the writing experience is such that I would consider buying one of these for myself were the pen a little larger. I think the Monte Rosa 042 would be a great way to get into vintage Montblanc without spending next month’s mortgage payment on a pen.