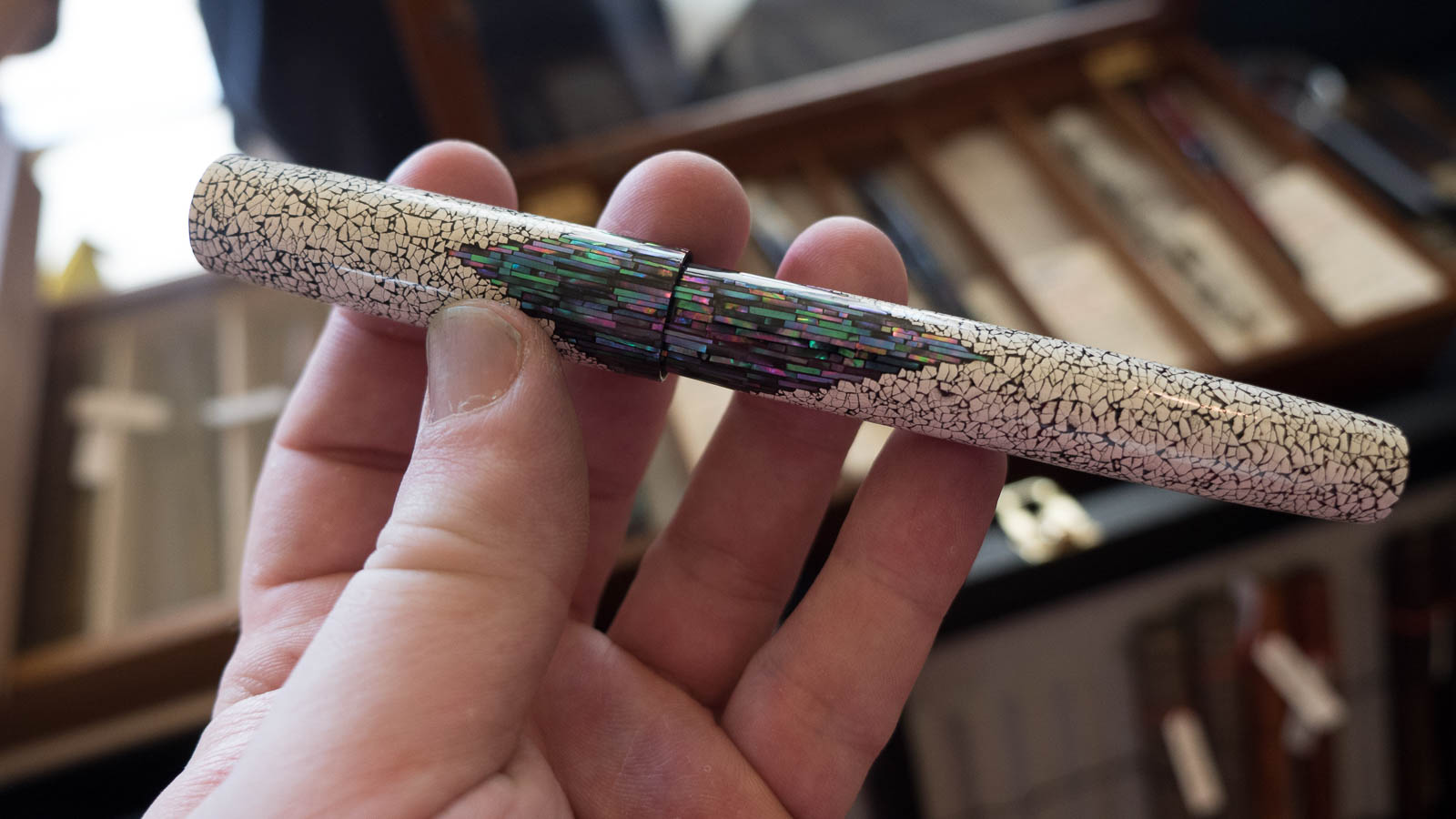 Pen shows are a great place to find pens that you can’t find anywhere else. The sheer breadth and depth of selection can be overwhelming, particularly if you go into the show without knowing what you are looking for, as I did at the LA Show. I knew I wanted to pick up pens for reviewing in season 4, but I didn’t have many “must-buys” for this trip.

With that massive selection of pens literally laid out in front of you, especially those out-of-production or vintage pens, option anxiety can become a real presence in your day. There will always be more pens you want than you budgeted for, and you have to walk the fine line between wanting to see everything to make sure you get what you really want and needing to snatch up something special before someone else does.

Even though LA is only my second show to date, I’ve already started to develop a strategy for how I approach multi-day pen shows. On the first day (Thursday), it’s all about getting the lay of the land and chatting with people I haven’t seen in a long time. On the second day (Friday), I start off visiting those vendors who have stuff I know I need to pick up. These are items I heard about before I arrived at the show, or that were on my must-buy list. Then, the rest of the second day is spent doing a deeper dive among the various vendors, scoping out what’s available and what catches my eye. It is in the latter half of the second day that my short list begins to take shape.

I like doing things this way for a couple of reasons. First, if I’m not 100% sold on a pen, it takes the pressure of decision away from me, because if the pen is gone by the time I return on day 3, it just wasn’t meant to be. Second, compiling a list on day two allows me to ruminate overnight on my various options. Usually, by the morning of day three, I have naturally whittled at least a couple of items off of my shortlist; and usually, one or two have bubbled to the top.

My day 3 started, again, in a beam of sunshine. (Sun in February is such an odd concept for me, I never really got over it all weekend.) I arose early and spent some time responding to YouTube comments and answering emails while HGTV played softly in the background. I look a long, leisurely shower. I skipped breakfast and instead picked at a couple of KIND bars I had bought at the neighborhood CVS. And, around 8:30, I headed back downstairs for the show.

Finally, on day 3, with the full complement of tables laid out, it began to feel like a show. I had allowed my shortlist options to percolate overnight, and one pen in particular kept bubbling up to the top of the list: I needed to own the Tibali Impero in Sarj’s collection. I had thought about it all night. I had mentioned it to several people. I couldn’t get the pen out of my mind. So my first stop of the morning, after making a quick loop of the floor, was directly to Sarj.

“I think that’s the shortest time I’ve ever held one of these before reselling it,” Sarj ribbed me as I stood at table, counting out $20 bills.

And with that, I was the proud owner of Tibaldi Impero #E040.

The previous night at the hotel bar, I had been introduced to the work of the Japanese penmaker Stylo-Art. These handmade pens used Sailor or Pilot nib units which were attached to hand-turned pen bodies beautifully figured wood or ebonite. Many of their pens were urushi lacquered, and many were decorated with stunning raden designs of abalone shell and quail eggshell. And they were priced quite well considering the amount of work that went into each pen.

Next to the Japanese couple from Stylo-Art was the Eboya table. Eboya is a brand I’ve seen popping up more and more recently, and with which I am becoming increasingly intrigued. Eboya, which is also a Japanese brand, uses some of the most stunning and highly-figured ebonite I’ve ever seen. I wish I had captured a good picture of it, but I the pictures I took came out blurry. The pens are beautifully shaped with excellent craftsmanship.

I was sorely tempted to part with a chunk of my money between either Stylo-Arts or Eboya, but I couldn’t decide on a model, so I put them both on my “check back later” list.

On Saturday, I finally met the “Karas Kustoms guys.” Karas Kustoms, for those who don’t know, is a shop based in Mesa, Arizona that did a high successful Kickstarter campaign a few years ago to launch a line of machined metal fountain pens. Since then, their pen line has become quite popular and has started showing up in major fountain pen retailers. Having spent a couple of years in the East Valley of Phoenix myself, we had something to chat about as I sidled up to their table on Saturday morning. While there, I picked up an Olive Green Karas Kustoms Ink fountain pen with a copper section for review later this season.

That morning, I was also introduced to the German brand Diplomat, when I stopped by the table of the American distributor. They had a green pen on display (which is always a good way to get me to stop by your table) and I chatted with them for a while. They’re lovely folks, with that southern charm you just can’t avoid even if you wanted to. While I was there, I picked up one of their Aero pens for review later this season. (Review preview: This nib? Holy-freakin’-cow!)

By the time lunch rolled around, I was pretty pleased with my pen show purchases. I landed some great items and even managed to get ahold of the ever-elusive Tibaldi Impero, which I had been coveting for a while. I met some great new folks, and had been introduced to a couple of new brands. I strolled over the strip mall with my Kindle and read my book (Wool by Hugh Howey) while I munched on a couple of slices of pizza from Union Pizzeria.

By the afternoon of day 3, the signs of preparation for the public day on Sunday were becoming more visible. Yafa had set up their massive spread of Monteverde, Conklin, and Delta pens right by the entrance. A security guard appeared, checking passes. The foot traffic was still really light on the show floor, but you could feel things ramping up for Sunday.

The veteran vendors and traders warned us that the show floor on Sunday was an absolute madhouse—waaay worse than DC. Because of that, I really didn’t plan on doing a lot of buying on Sunday at the show. I was hoping mainly to meet people and walk around a lot. So, the remainder of my Saturday was spent finding any last pens I wanted to buy. I spent a fair bit of time around the table of a UK trader named Gary. (I never learned his last name.)  I met Gary at the DC show, and I love hanging around him because of his Yorkshire dialect. As an audiobook narrator, I’m always on the lookout for native speakers so I can listen and learn. Gary had a massive collection of Sheaffer pens, in the midst of which, I spied this.

This is, as I understand it, a Sheaffer Legacy that was made as a color prototype in-house by Sheaffer. (Jim Rouse of Franklin-Christoph has made a bunch of pens he calls the “Sheaffer Legacy Fantasy” where he has replaced the stock Sheaffer barrels with different acrylics.) But this one is supposed to be a factory prototype. It is made with the reissued Jade acrylic that Sheaffer came out with in the 90s, and has a factory OBB inlaid nib. It’s a great writer, and cool-looking to boot. I thought it a great find.

Then, to wrap up my afternoon, I wound my way back toward Andy Lambrou at the Classic Pens table. Andy, too, has taken a sizable chunk of my money. I had spent some time around his table ogling the LB6 (especially the PURPLE LB6 for which he was taking pre-orders) but they were all a bit too rich for my blood.  But in wandering the show again on Saturday afternoon, I saw a beautiful pen in striped shades of green, blue, and brown. I had never seen the pen before, so I asked about it (and subsequently nearly collapsed to the floor when I learned how much it cost.)

But while I was there, Andy informed me that there were only two of his last LB3 Jupiters: #001 and #038. The LB3 Jupiter is made from the blue Classic Pens diffusion-bonded acrylic by master penmaker Paul Rossi, and then is drilled and inlaid with other materials to create a really cool-looking star- and planetscape. He offered me a fantastic deal on the #038…one that literally was too good for me to pass up, so I added my fourth Classic Pens acquisition to my collection, despite having not planned on doing so.

And with that, I was done…for the day.

After another nice, long nap (I love me an afternoon nap!) and I decided to walk over to the little Mediterranean restaurant over the neighboring strip mall, The Hummus Factory(?). The food was…awful. Actually, even calling it “food” is being generous. I can honestly say that I have never eaten at a restaurant where I have disliked the food more. To help wash the taste of nastiness from my mouth, I also stopped at “Nothing Bundt Cake,” a small cake store there in the same strip mall, and got a lovely little lemon bundt cake for later. It wasn’t as good as a pie would have been, but beggars can’t be choosers. (After all, Pie > Cake).

Saturday night was the Pen Addict Meetup which was sponsored by Kenro Industries (the Montegrappa, OMAS (R.I.P), and Aurora distributor in the US), and a group of folks met up in the lobby for drinks and a prize giveaway. I was the winner of a small Montegrappa notebook and a bottle of Iroshizuku ink. (Unfortunately, it was a color I already owned, so I passed the ink along to someone else to enjoy.) The rest of the evening was spent over drinks in the bar with a group of 10 or so people chatting, laughing, and sharing stories.  It was a lovely evening (during which I…overindulged…a bit. I’m not really a drinker, so I’m a lightweight.)

Eventually, I made my way back to my room in something of a fog and ate my lemon bundt cake while I watched Food Network and calmed down from the day’s activities. (There may have also been a bit of gazing longingly into the topaz depths of my Tibaldi…)