The longer I spend with fountain pens, the more I seem to be able to identify specific characteristics about those pens based on the country of manufacture. German pens are generally well-made, with solid nibs, and tend to fall visually on the understated side. Italian pens are flashy and showy (even gaudy), with an inconsistency of quality control between sublime and unusable. Japanese pens are rock-solid consistent, with higher feedback (but high-quality) nibs even on the cheapest offerings.

Then there are pens from India. I certainly do not have wide-ranging experience with all Indian-made pens or Indian pen manufacturers. I have, however, done reviews of several offerings and found them…lacking. There seems to be little concern over fit and finish, nibs that are poor-to-unusable, and a handmade aesthetic that lacks the pride of construction you would normally see from custom pen makers. They fall into an unusual place in the pen market…handmade(ish), but at an affordable price point. If I had to paint all Indian-made pens with a single brush (which I fully admit is unfair) I would say that Indian pen makers have opted to compete on price rather than on quality.

After a series of particularly frustrating pen reviews, I received an email from an Indian viewer who asked me to consider taking a look at the pens of Indian manufacturer and retailer, Asa Pens. According to the viewer, the pens from Asa Pens were some of the higher quality offerings, and the proprietor of asapens.in even adjusts the nibs prior to sending out the pen if requested. (Thus, one would hope, alleviating my biggest complaint about pens from this part of the world.) So, with that in mind, I placed an order. 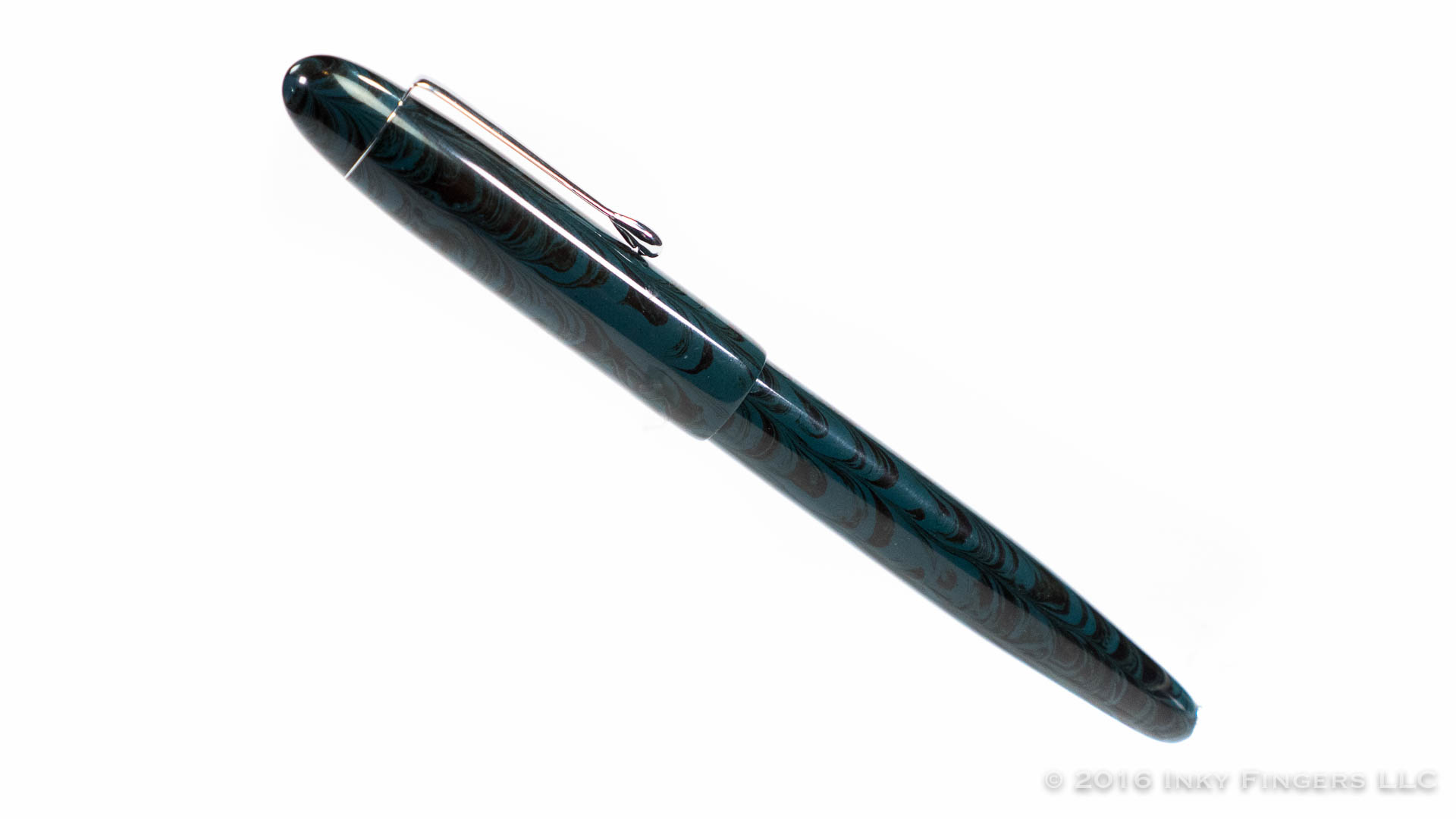 Among a few others (reviews of which will be coming up in Season 4), I selected the Asa Pens Daily 3-in-1. This cigar-shaped pen is made of blue ripple ebonite, manufactured in a relatively generic, but attractive, form. Asa Pens is a small operation, so the pen is not always available, nor is it always available in every color. (At the time of writing this review, there were only available in a brown ripple and a brown mottled ebonite.) If there’s a color that you want, but that is not available, I would recommend reaching out to the retailer to ask about when they plan on getting more in stock.

The pen’s cap is topped by a rounded finial, which holds on a ring-mounted, folded-metal clip. The clip is a bit flimsy, but gets the job done. The rest of the cap is unadorned, giving a good view of the beautiful, swirly material. I should mention that the edge of the cap is quite thin, and is not reinforced at all with a cap band, so I could see this as a potential area for cracking. 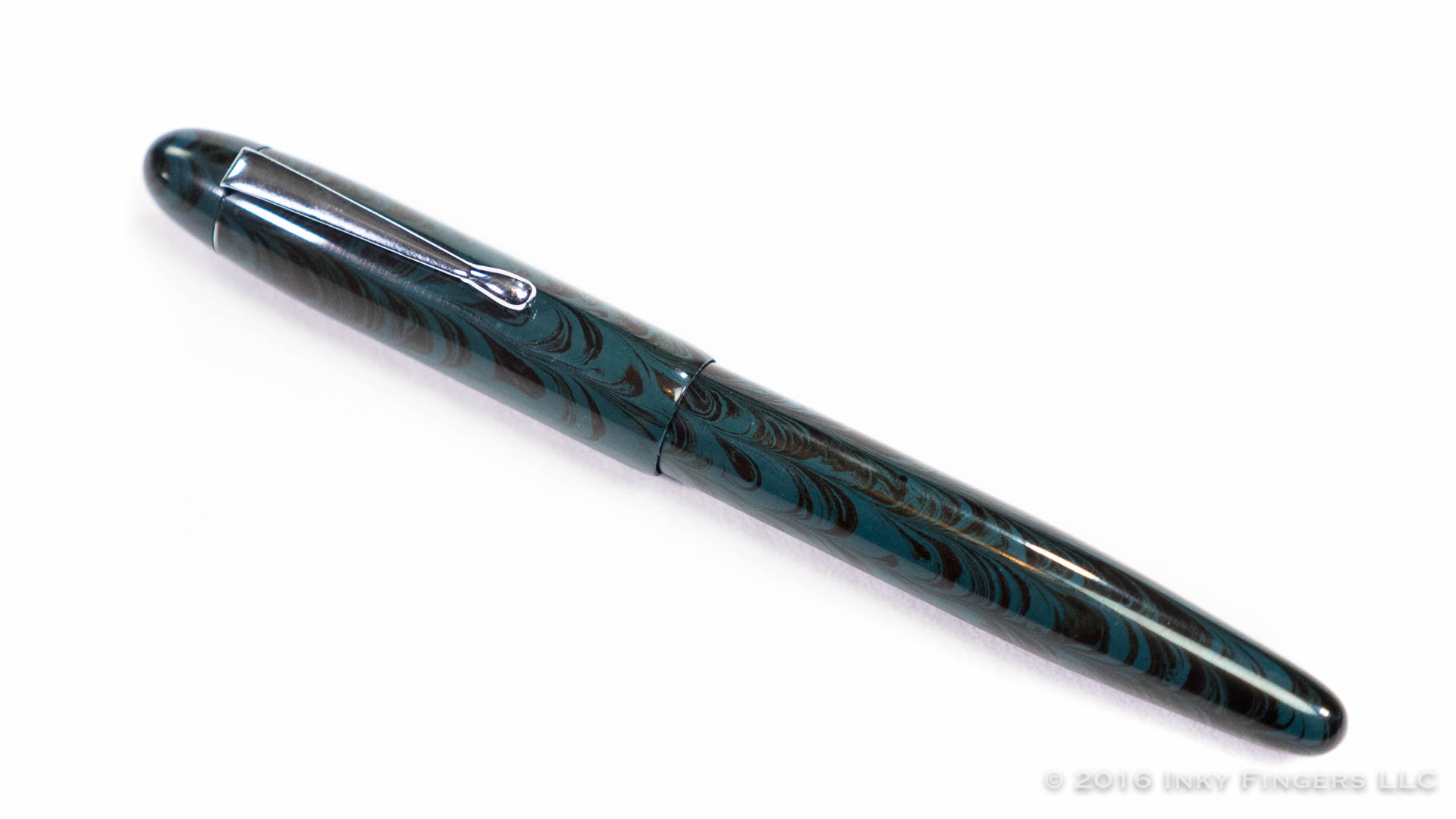 The pen’s barrel is also relatively unadorned, tapering down to a rounded point at the end. The barrel does, however, have a very chunky and unattractive “ASA Pens” engraved on the side of the barrel in large block letters. I don’t mind a minor or tasteful barrel imprint, of course, but this one is just plain unattractive. I would have preferred the pen without any imprint at all. 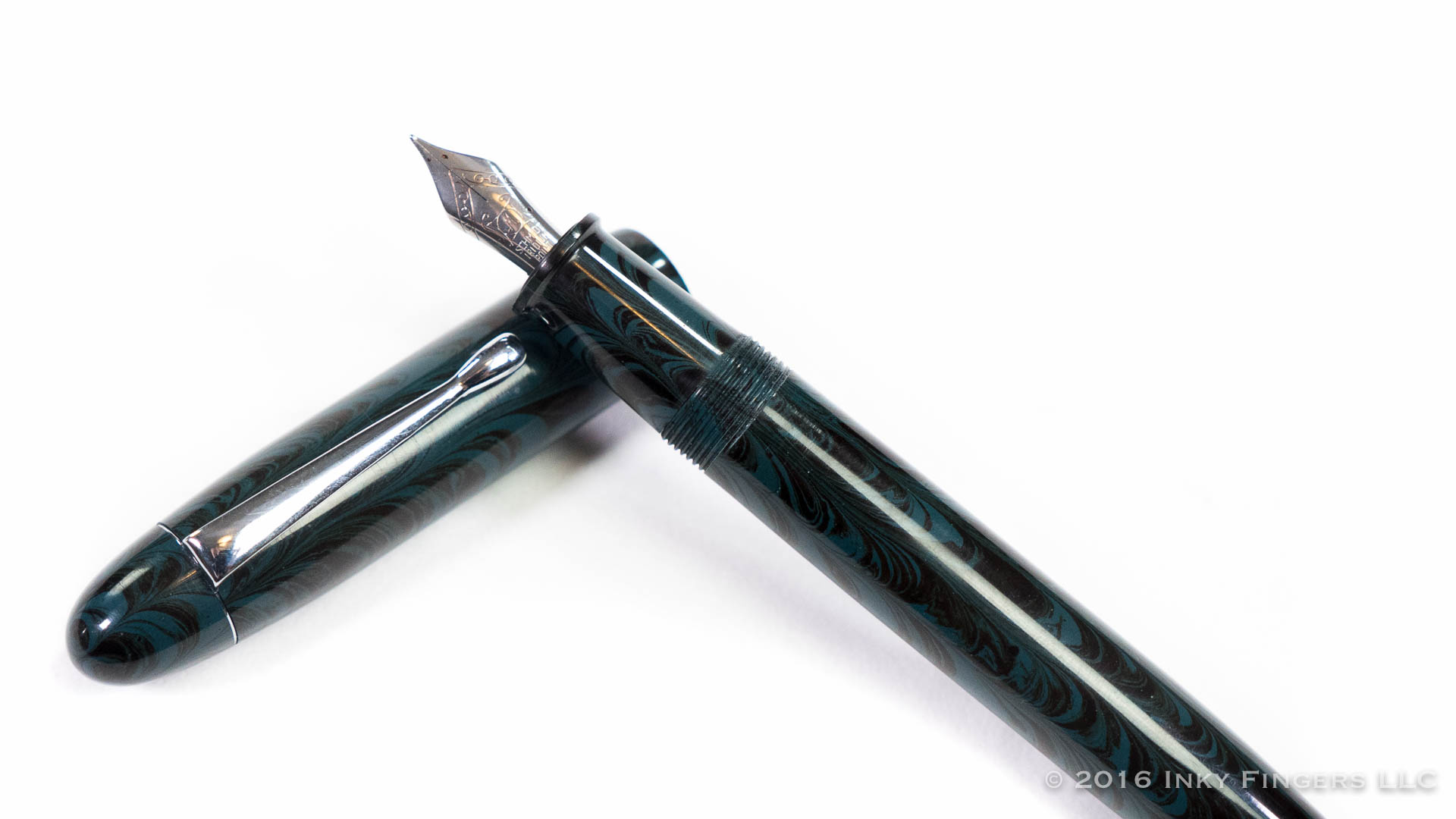 My first bugaboo about the pen comes when you go to take off the cap. It takes four full revolutions of the cap to remove from the barrel. As a notorious pen fiddler, who is constantly capping and uncapping his pen, I find the amount of threading excessive. I’m not a machinist, but it appears that the threads are hand-cut and single-start, which may be the reasoning behind the longer threading. The threads are smooth and fairly loose, except for the final quarter turn, which tightens the cap up quite nicely.

Under the cap, you have a tapered section which flares out a bit at the end, and which holds in place a screw-in Schmidt #5 steel nib unit. The nib lacks a breather hole, and has the ho-hum Schmidt branding on the nib seen in the photo above. Visually, it’s far too small for the pen, which really should have been made to work with a #6 nib for better visual balance. However, it’s a wonderfully smooth, moderately wet nib, and it’s a pleasure with which to write. 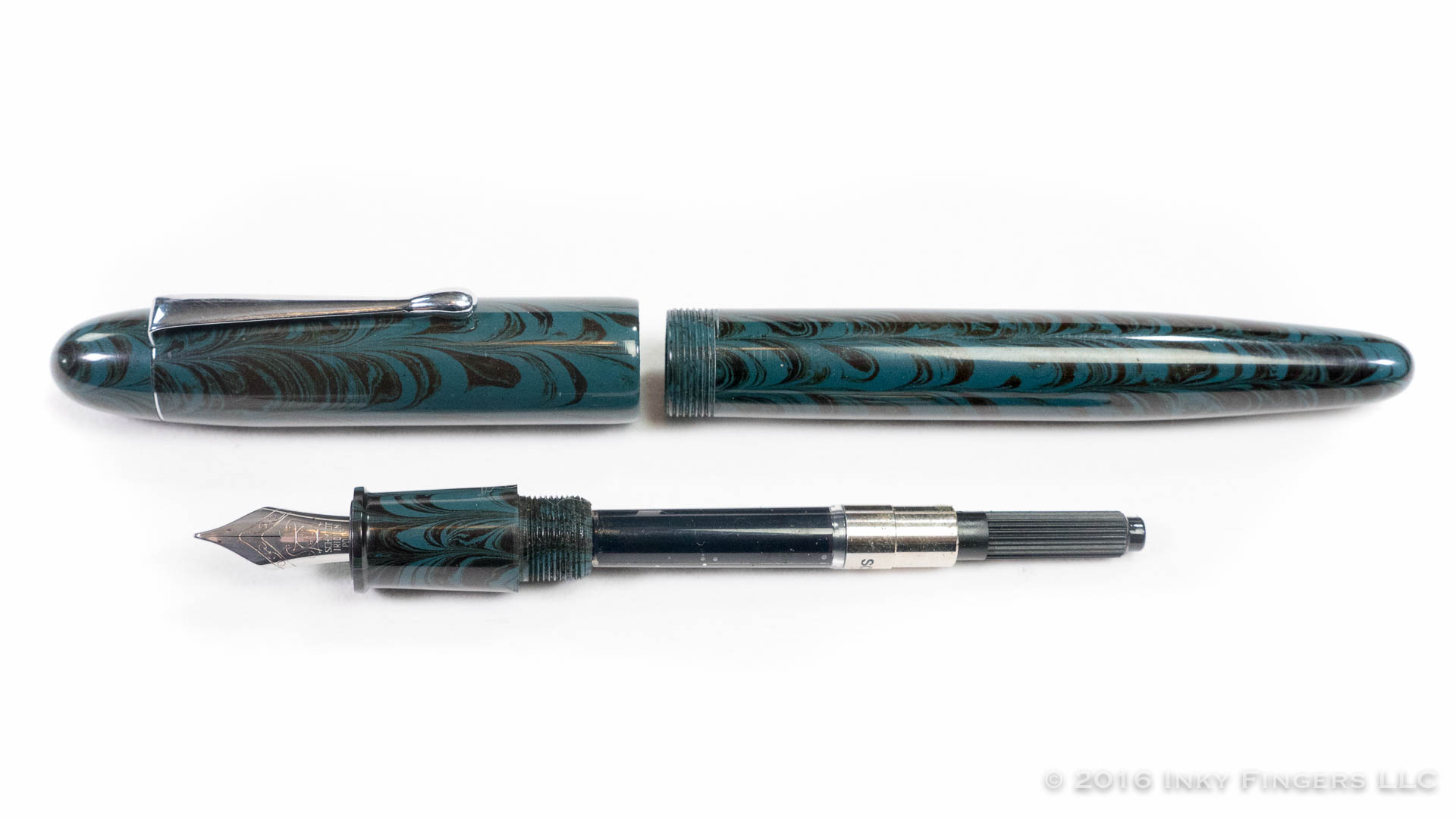 The pen is called the 3-in-1 Daily Writer, because it can be filled using cartridges or converters (standard international), or, being made entirely of ebonite, as an eyedropper with a mammoth ink capacity. The threads on the tenon, which are quite long and tight, are actually perfect for eyedropper filling with just a touch of silicone grease on the threads. 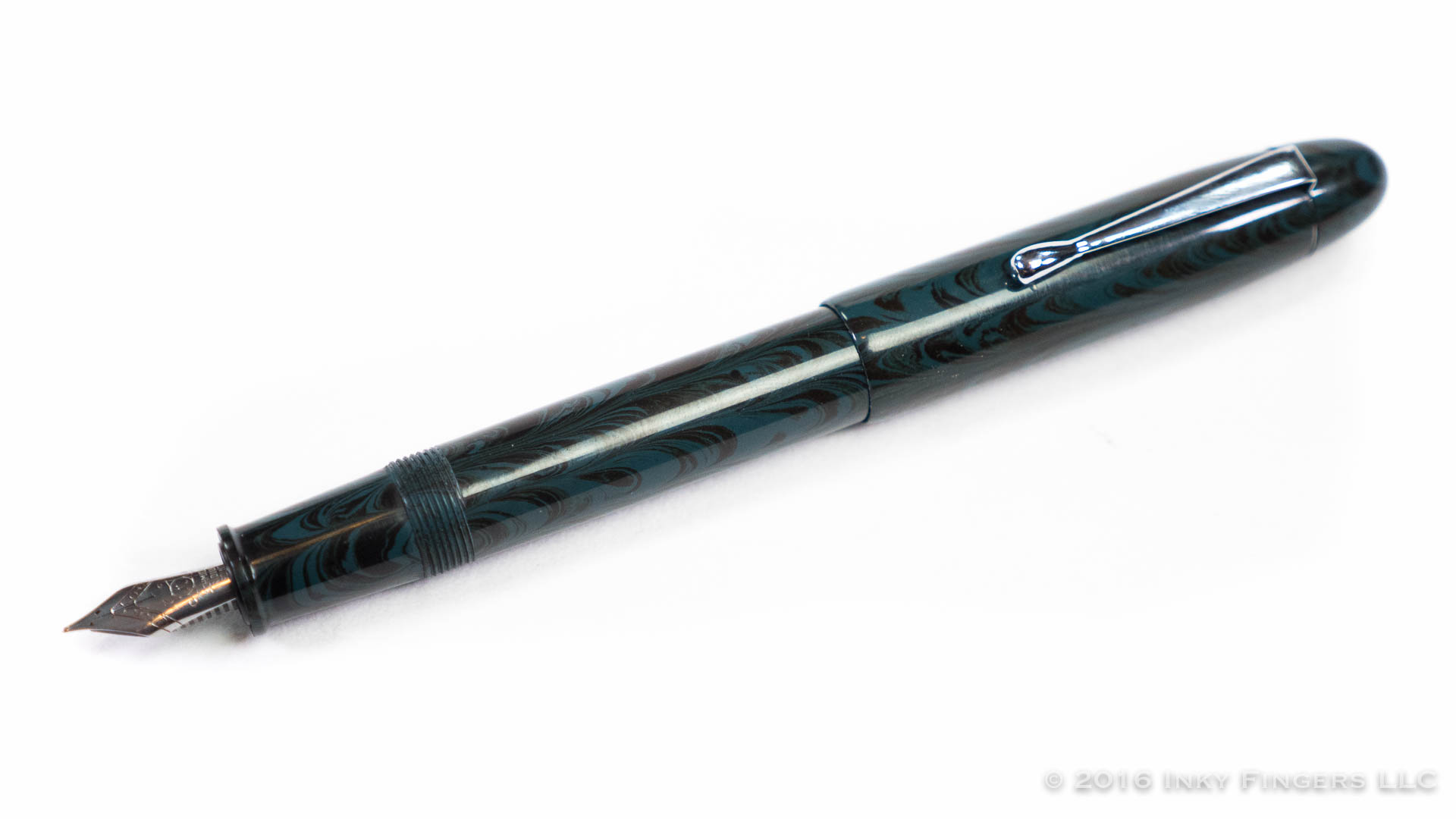 In the hand, the 3-in-1 Daily Writer is quite comfortable. It is a very light pen that is both long and a bit girthy. The lack of a step-down between section and barrel gives the user a wide range of potential grips for the pen. Even gripping on the threads is not a major concern, as the threads are not very sharp. The perfectly-tuned nib does make writing with this pen a lot of fun. As mentioned above, I feel like the balance of the pen would be improved a bit by a longer nib, but that’s a fairly minor quibble. The pen can be posted if you like, and it posts rather deeply; I would be careful doing so, however, due to the aforementioned thinness of the cap lip. 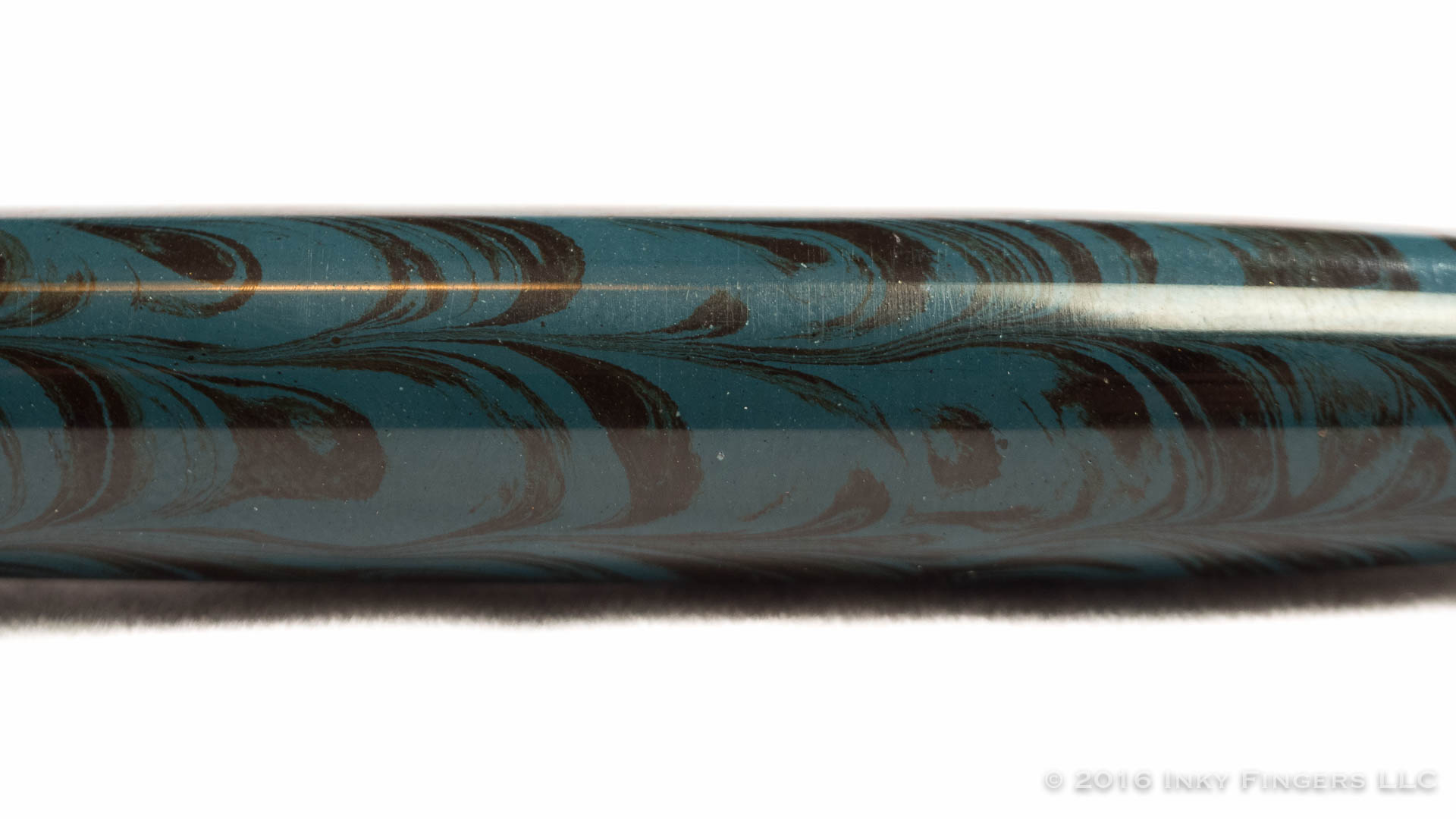 From a comfort and writing performance standpoint, this pen handily avoided some of the mental stereotypes I had formed about Indian-made pens. When it comes to the fit and finish, however, those stereotypes are still there in force. Don’t get me wrong: it’s a nicely-made pen. But the ebonite material had quite a lot of inclusions, leading me to believe that the material itself wasn’t top-notch. Neither was the pen fully sanded and polished. You can still see the tooling marks and minor gouges from the shaping. From a distance, it doesn’t look too bad; up close, though, it just doesn’t appear as though a great deal of care went into the finishing work.

I should also note that it hadn’t been properly cleaned, either. When I opened up my pen, the barrel was still full of ebonite shavings from the manufacturing process. Thank goodness that I chose to do a full cleaning before inking up, otherwise, who knows what particulates I would have been sending through the feed…especially if the pen had been eyedropper-filled. 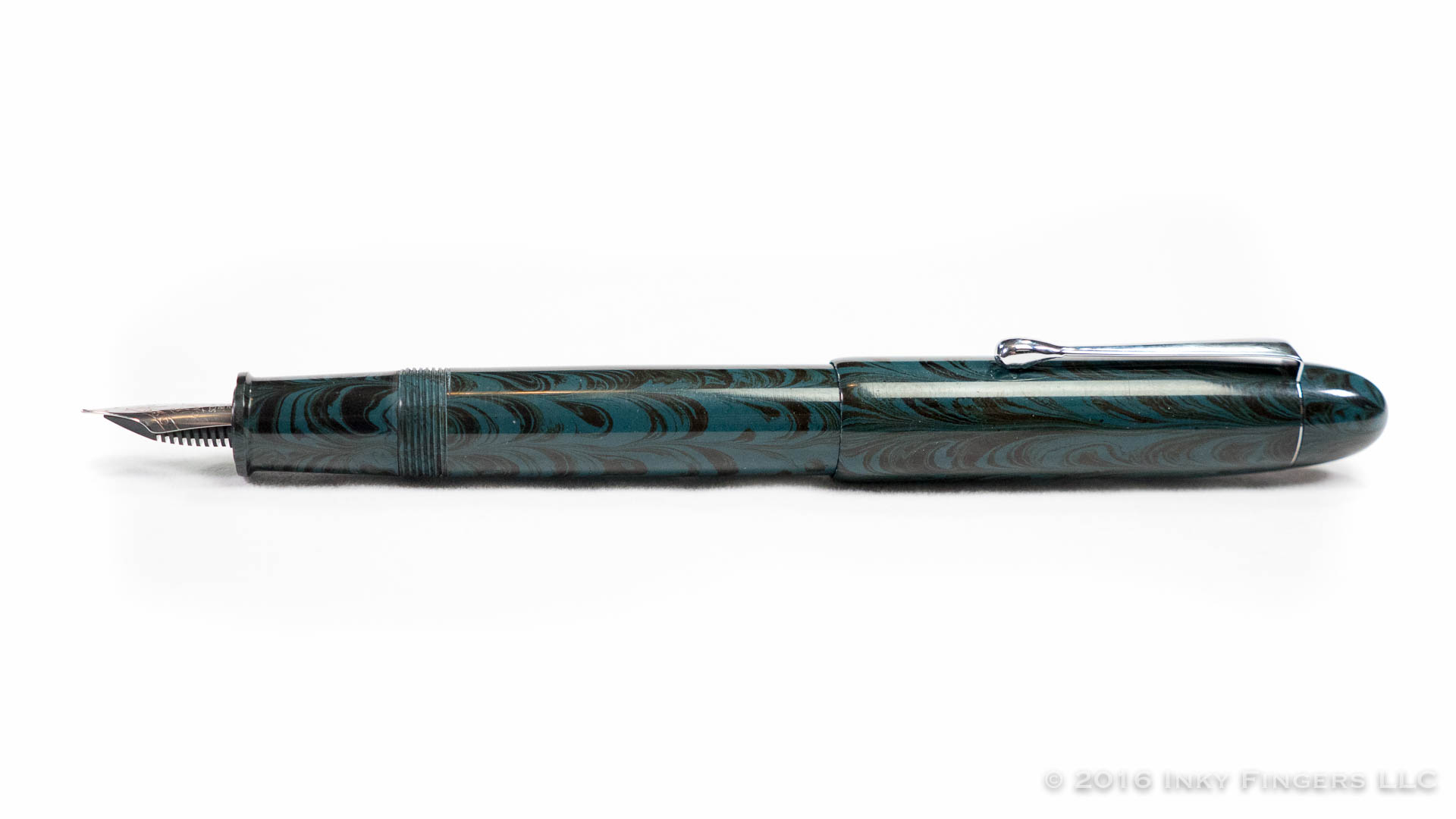 My complaints about fit and finish being what they are, I do need to say that this is a pen that writes extremely well, is comfortable in the hand, and uses a German-made nib. And it retails for $32 USD. (The pen does not come with a converter; a Schmidt K5 converter can be included for an additional $4). At that price, this is a pen that competes in the same arena as the TWSBI Eco, the Faber-Castell Loom, the Pelikan Stola III, or the Lamy Safari. But it’s handmade. From ebonite. Personally, I would be willing to spend an extra $5 or $10 if it meant that my pen was being properly finished, but the Asa Pens Daily 3-in-1 is a great price if you’re looking for an entry-level ebonite pen to see what all the fuss is about. Just make sure you buy direct from Asapens.in, and ask to have the nib adjusted before it is shipped to you.