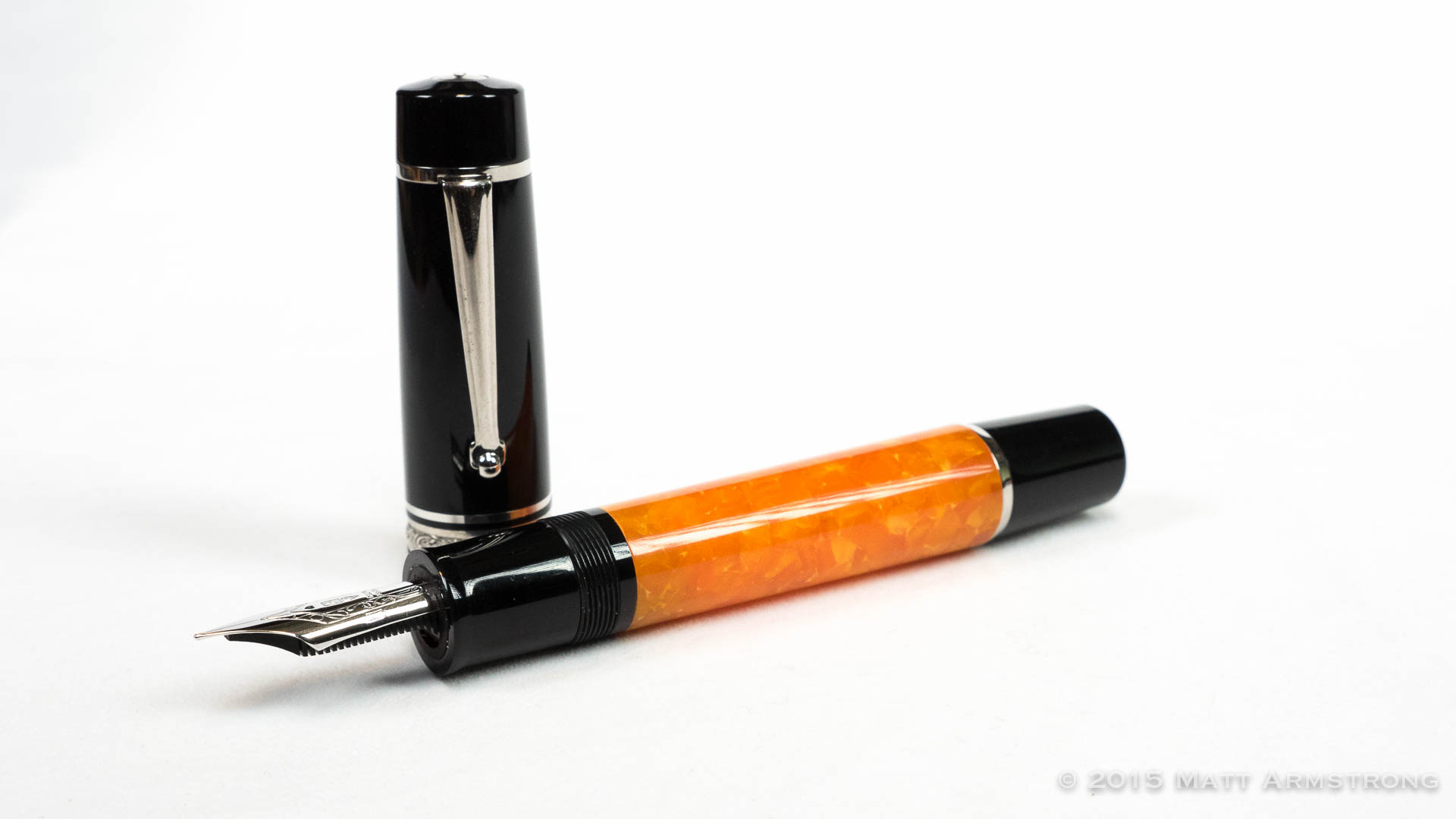 Brand identity can be a tricky thing. How do you develop a look or style that is easily identifiable without allowing that look or style to lock you into a long-term design direction from which it may be difficult to escape? How do you establish a look and feel that is tied to your core aesthetic without becoming too married with a design style that will become outdated over time? Many brands take the “safe” route, picking for their flagship models pens with designs so time-tested and classic that there is very little likelihood of them falling out of fashion. Some brands pick a distinct feature to highlight and include it on all of their products (e.g., Visconti’s bridge clip.) Other brands, like Delta, opt instead for a brighter, flashier, and very distinct, brand identity that sets them apart from the field. 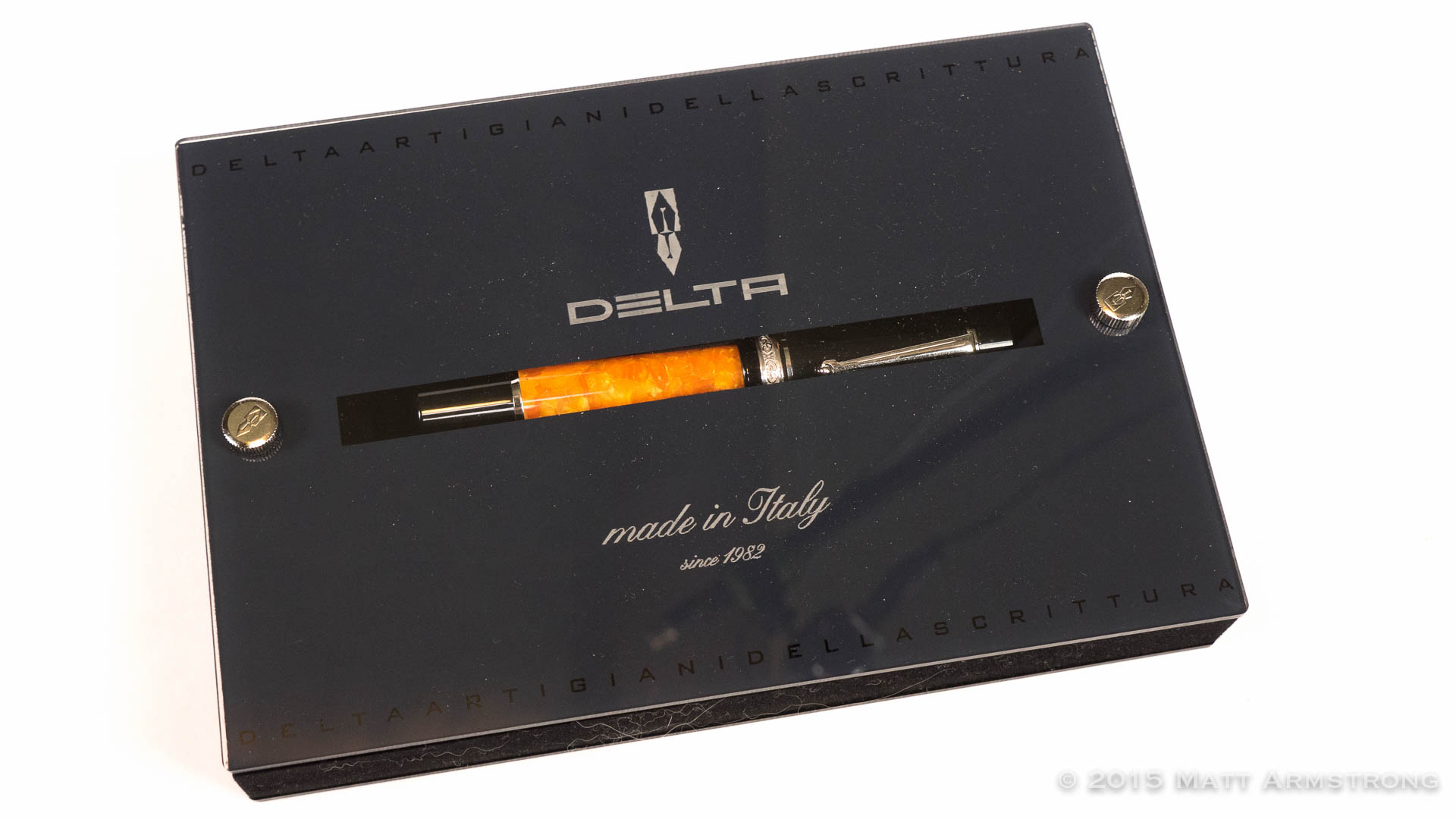 Black and Orange. Is it not a color combination I personally would have chosen for my flagship pen model. Nevertheless, the Delta Dolcevita line is known for its bright orange flake resin coupled with black. You can see a Delta Dolcevita from across the room and know it’s a Delta. Earlier in the season, I reviewed the Delta Dolcevita Federico Stantuffo, a piston-filled version of the Dolcevita in the medium size. It is a lovely pen with a spectacular nib, and I liked it quite a bit (as I have liked nearly when to get dating scan Delta dating sites brisbane I’ve ever used.) 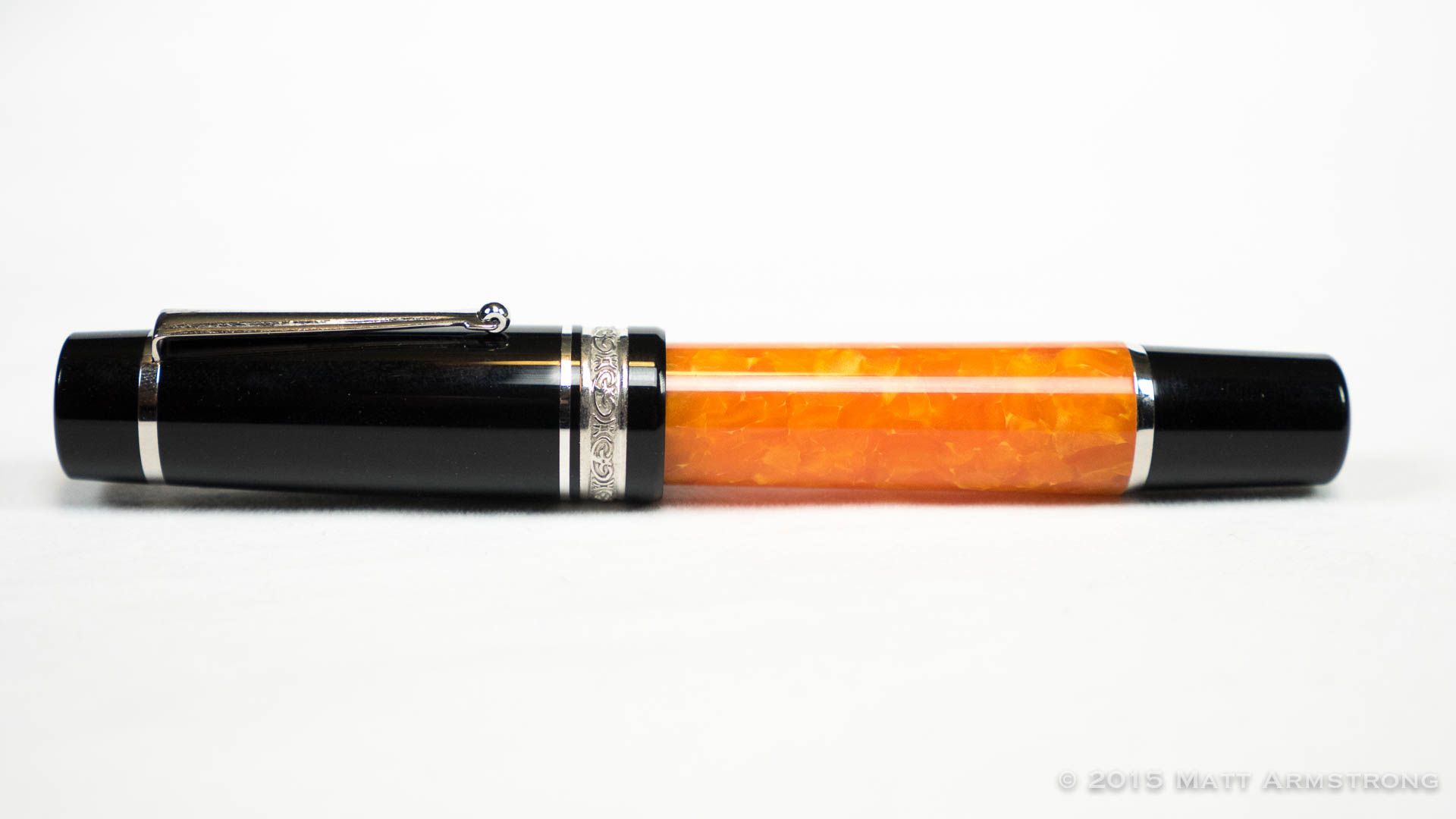 The Delta Dolcevita Oversize could be considered the top-of-the-line pen in Delta’s regular production-line pens. And like most flagship models for most brands, The Oversize is a very large pen. Length-wise, the pen is not quite as long as the Montblanc 149 or the Pelikan M1000. The pen more than makes up for it in girth. The pen is so thick (almost 15mm at the section) that it makes the pen look shorter and stubbier than it actually is. 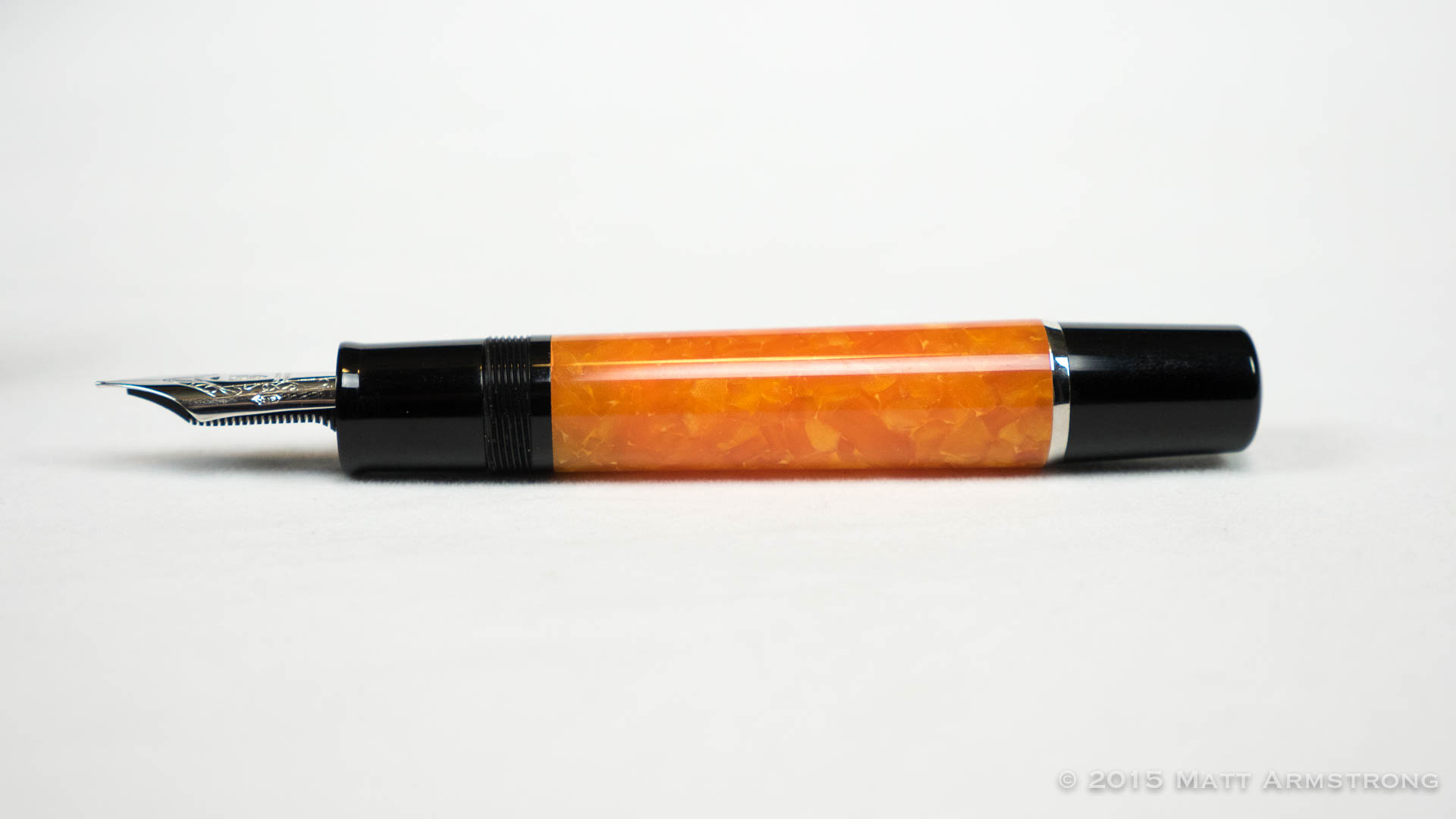 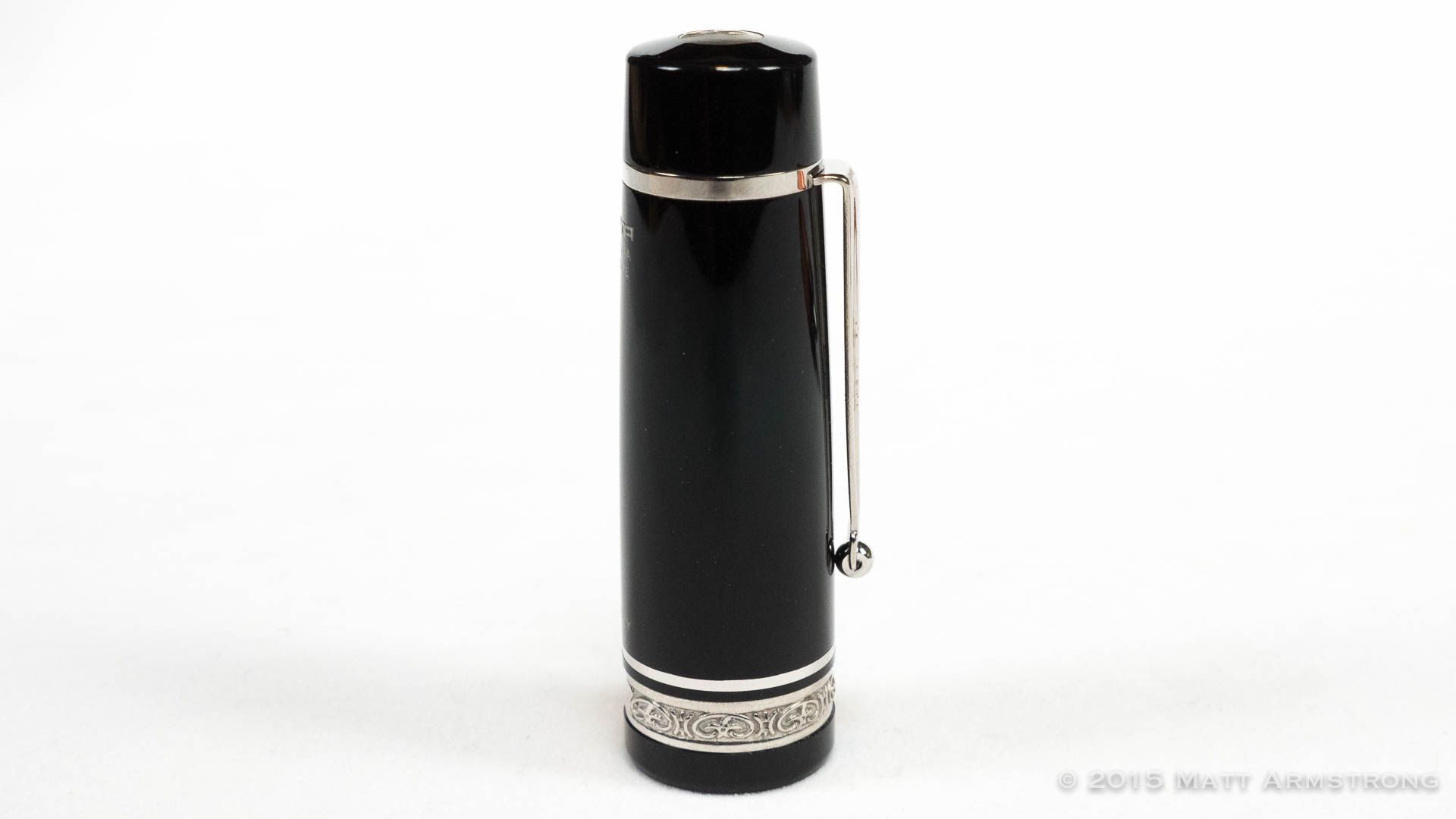 The Dolcevita Oversize is faithful to the brand’s iconic design. The pen’s black cap is topped with a slightly domed finial, into which is inlaid the Delta logo medallion. The finial is separated from the rest of the cap by means of a thick silver band, into which a slot is cut for the clip. The clip has a pretty clean design and features a little roller wheel at the end. The clip itself feels springy, but not so much so that you would have to worry about bending it out of place. Opposite the clip is a bit of screen-printed text: “DELTA DOCEVITA OVERSIZE” at the top, with a serial number and the word “Italy” at the bottom. The method of printing is a little unfortunate, because even after light use, the edges of the edges of the printing has started to wear away. The bottom of the cap is accented by a thin silver cap band and then a much thicker, intricately-engraved cap band. 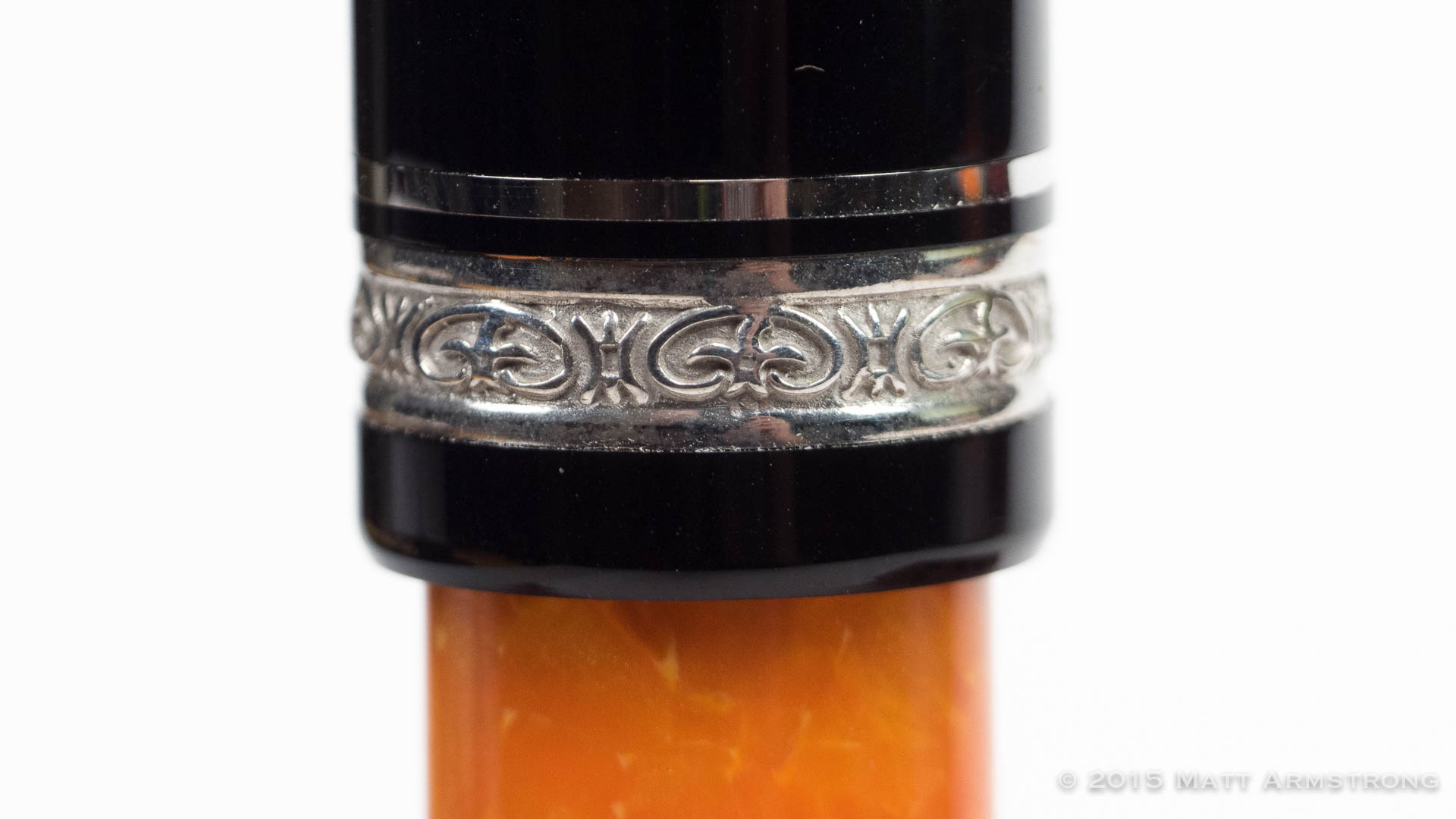 Getting definitive information about Delta pens, especially the seemingly endless variations of the Dolcevita line, is a little difficult as there is a lot of conflicting information from a variety of different sources. It is my understanding that the metal trim on the standard Dolcevita Oversize comes in either Sterling Silver or Gold Vermeil (gold-plated silver). It is also my understanding that the cap band on the Dolcevita Oversize is hand-engraved rather than machine-engraved. I have no easy way of confirming either of these things. I can tell you that compared to my Dolcevita Federico Stantuffo, the quality of materials is much higher on the Oversize. The engraving is deeper, crisper, and more attractive. The clip is mote sturdy, and the metal looks more like real silver rather than stainless. 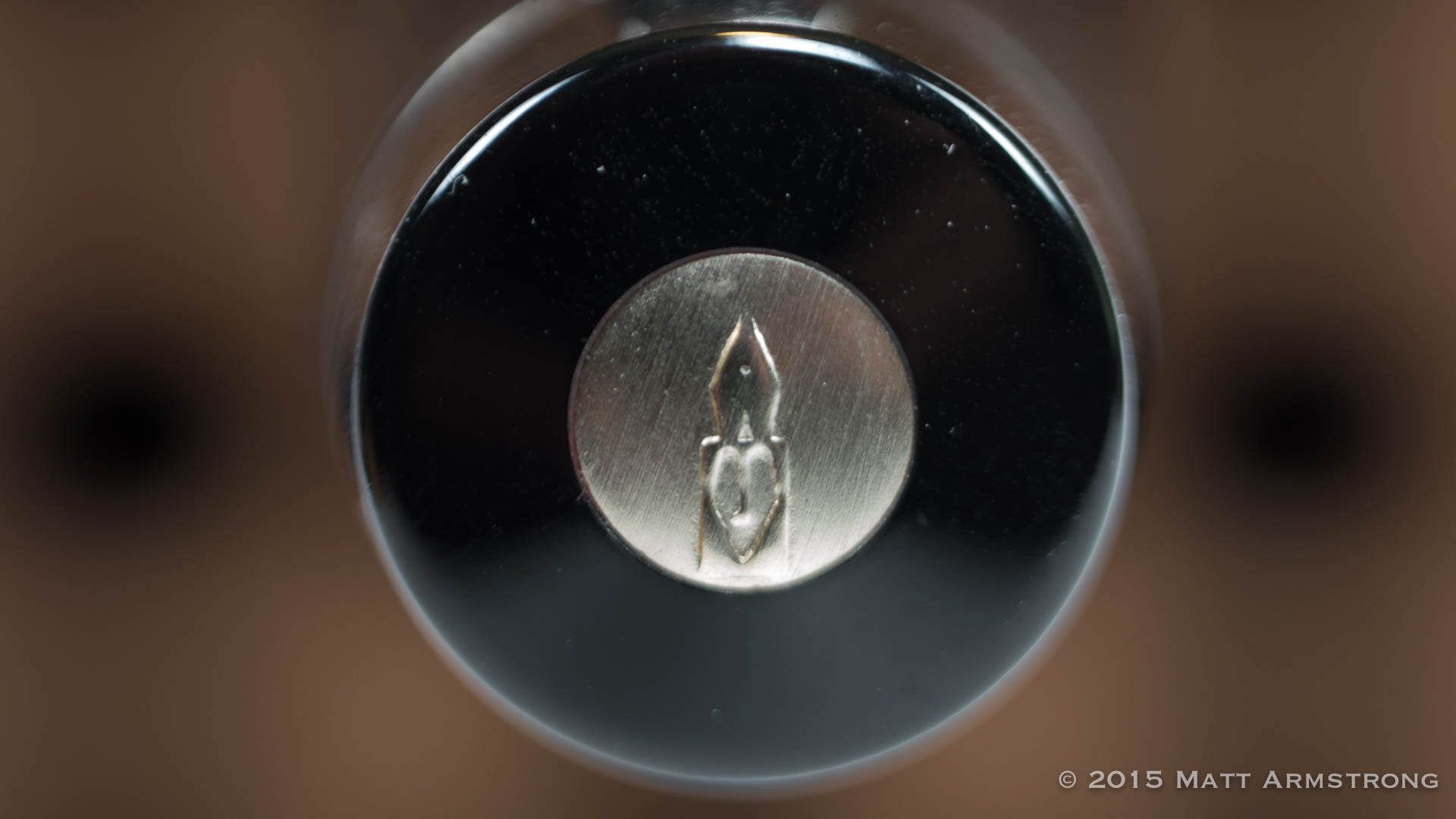 The barrel consists of the bog-standard Delta orange resin. (I have heard from various sources that this material used to be celluloid, but based on all information I can find these days, they’re using resin for the barrels now.) There is another silver band which separates the end finial in black resin from the rest of the barrel. 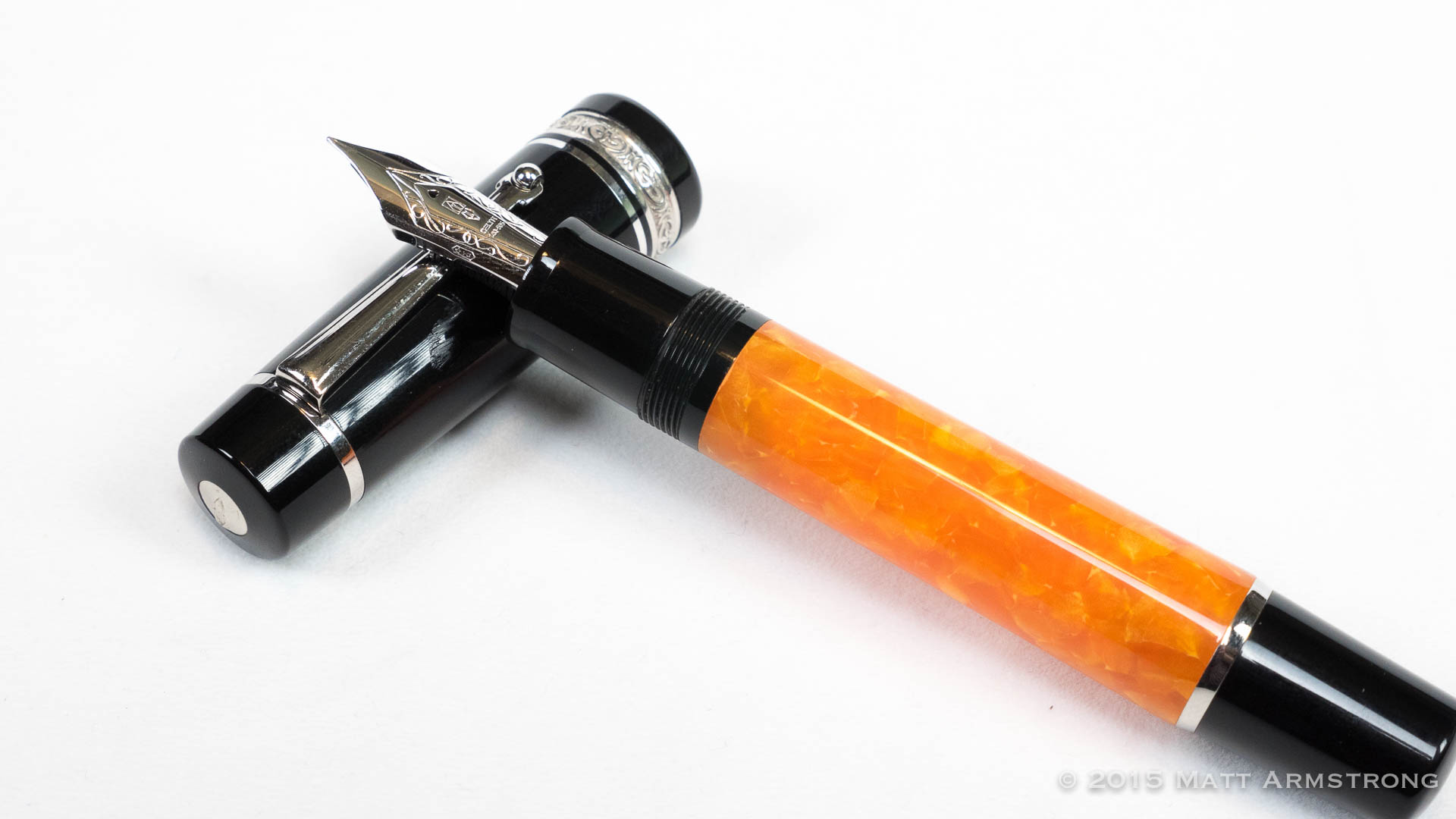 The cap comes off the barrel in a single turn on smooth, tight threads to expose a massive grip section and nib. The grip on this pen is, frankly, ridiculous. It is the single widest section of any pen in my collection at 14.9mm. It has a very slight taper, and then a short flare out at the end of the barrel. Generally speaking, I like decent-sized grips on my pens. I usually gravitate toward grips of 11-12mm, which is on the larger size. The 13mm grip on the MB149 is a bit much for me. The section on the Dolcevita Oversize is nearly comical. Delta really wants to make sure that you know they understand what the word “oversize” means. It feels like writing with a sapling…albeit a comfortable, well-balanced sapling. The pen is very nicely balanced, and if I take the time to re-train myself each time I sit down to write with it, I can get to rather enjoy the experience. But every time I pick it up for the first time in a while, I am reminded again of how big the grip is. 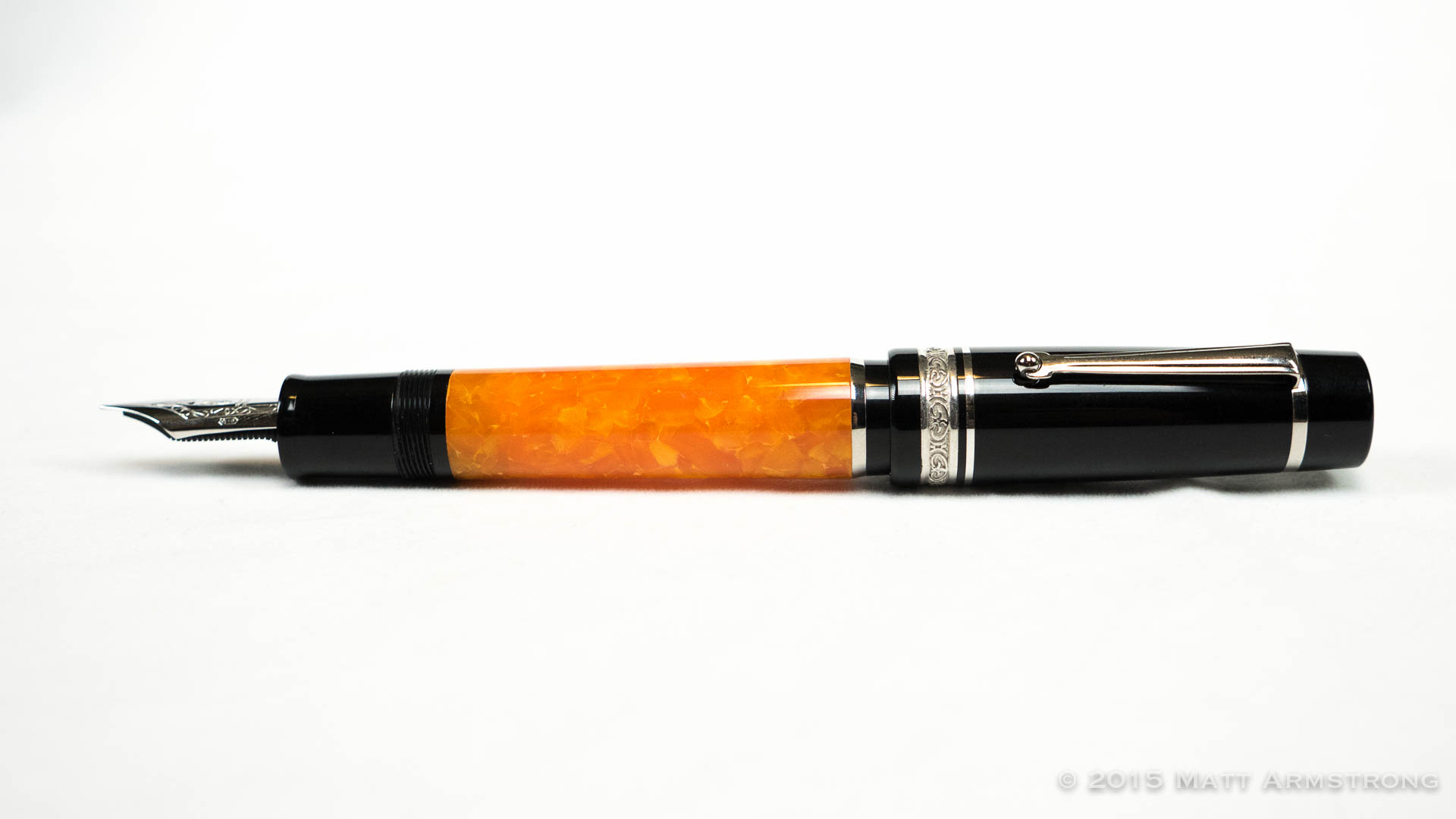 (On a somewhat related note, the pen can be posted, but unless you have Andre the Giant hands, I probably wouldn’t bother. It starts to feel a little silly.) 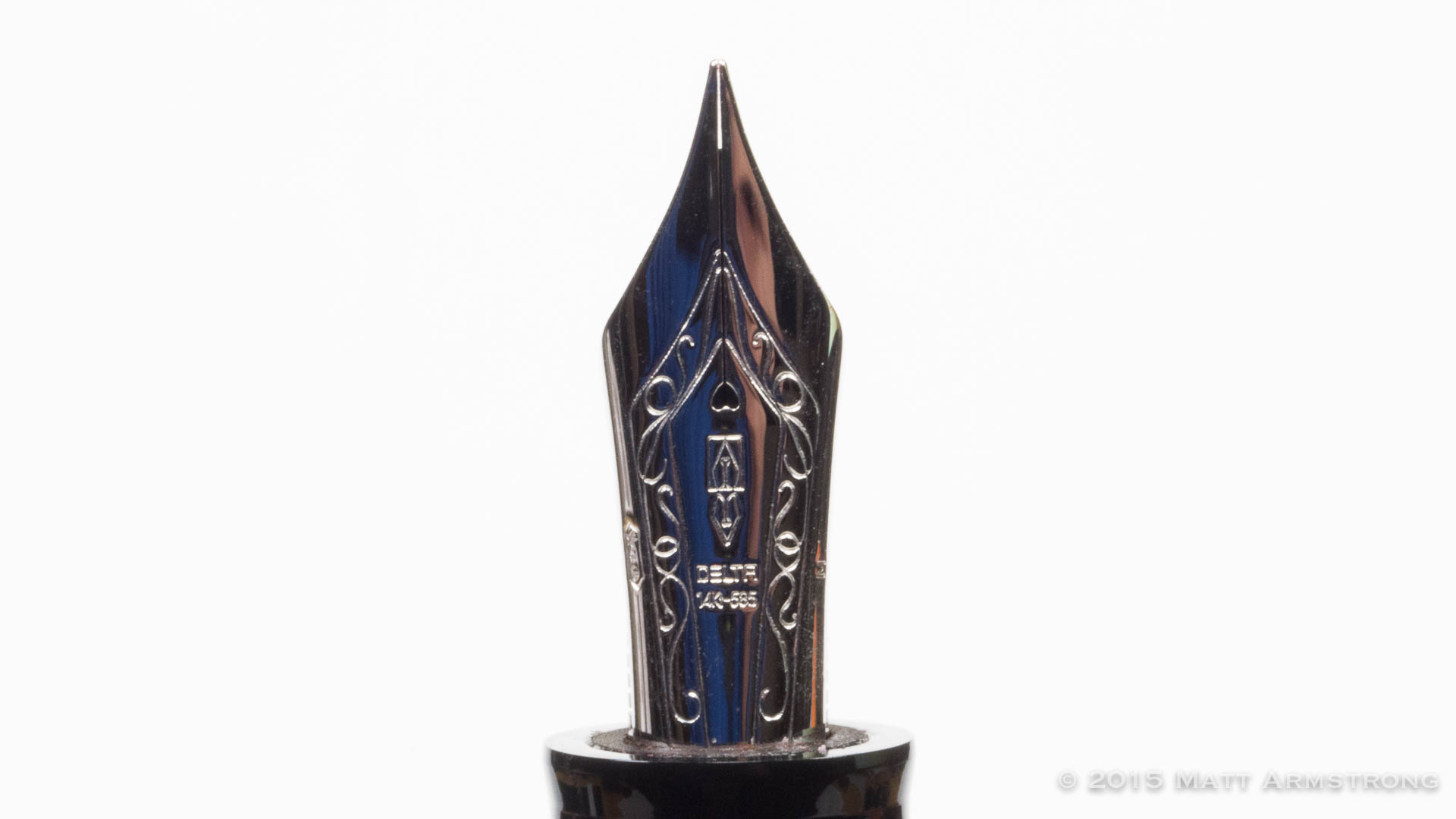 If Delta consistently does one thing right, it is their nibs. Across the board, every single Delta nib I have used, from the cheapest pen to the most expensive, has been a delight. The mammoth rhodium-plated 14k nib on this Dolcevita is no different. It is a moderately attractive nib, with a scrollwork design surrounding the Delta logo below a heart-shaped breather hole. In general, Delta’s nibs tend to run very smooth, wet, and a perhaps a touch wider than you might expect (likely due to their generous ink flow.) They are usually very light on feedback, but none I have ever used has been over-polished to the point that they exhibited issues with baby’s bottom. 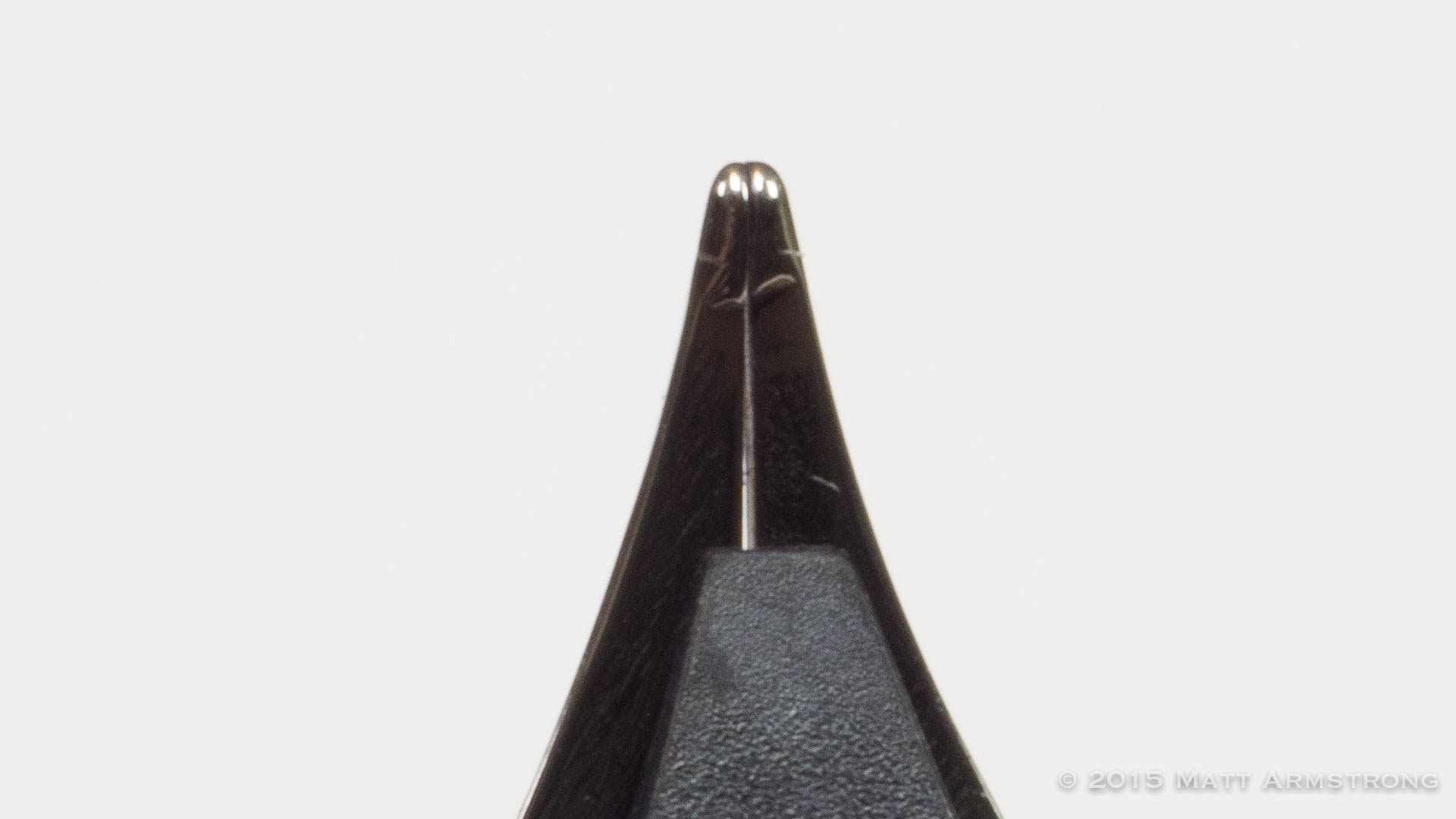 The large (#8-sized?) nib on the Dolcevita Oversize has all of these characteristics in spades. It is perfectly tuned and polished, with almost no feedback. It has a generous ink flow with helps the nib to just float across the paper. (I do love a juicy nib). The nib’s large size helps to provide a bit of a cushioned bounce to the nib that I didn’t find on the smaller nib found on my Dolcevita Federico Stantuffo Medium size. It’s not a flexy nib, but it certainly provides a nice bit of cushion to your writing and helps to highlight the shading and sheen in inks that exhibit those characteristics. It’s a really spectacular nib. 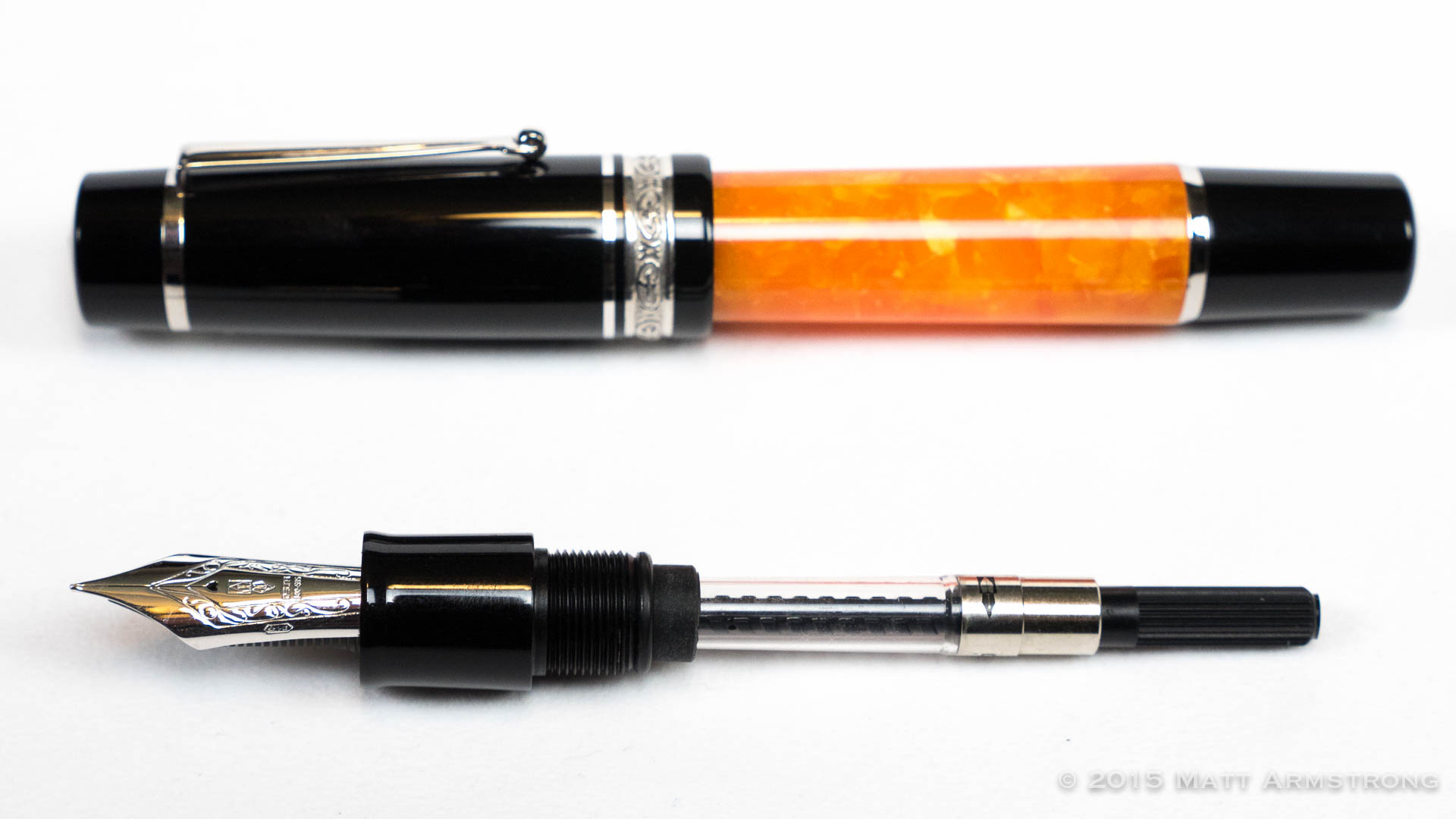 The filling system on this pen is a simple standard international cartridge converter system. This will be a turn-off for some people for a pen in this price range. It doesn’t bother me at all. (The more I use pens, the less patience I have for piston fillers and what a pain they are to clean.) The tenon on the pen’s section comes with a rubber O-Ring included, making me think that the pen was also intended to be used as an eyedropper-filled pen. I have found conflicting reports online about the success people have had using that method. (Some have had great success. Others have had issues with ink seeping through the joins between the orange and black material. I’ve never tried myself.)

Price and value on the Delta Dolcevita Oversize is a tricky thing. At the time of this writing, you can find prices for this pen anywhere from about $450 to around $800. Delta really muddied the waters by releasing multiple versions of this pen with nearly identical features, including exclusive versions for specific online retailers. They also have separate pricing for retailers in different parts of the world, so depending on the exchange rate, the real price may be more or less. Regardless of the price, there is no doubt this is an expensive pen. The quality of manufacture and materials, not to mention the beautiful functionality, are absolutely in line with a pen in this price range.

There is no doubt in my mind that this is a pen that deserves a place in the lineup with the Montblanc 149, the Pelikan M1000, the Sailor King of Pen, etc. If you like the design and materials, or prefer a pen with a girthier grip, the Dolcevita Oversize is a great option. I fine I actually prefer the oversized nib on the Dolcevita Oversize to the nibs of any of the other aforementioned flagship pens. (In fact, I think Delta probably the best nib quality control of any non-Japanese manufacturer.) Aesthetically, it’s not the understated board room pen you might expect from other manufacturers, but quality-wise, it’s right up there.